Why You Should Visit Saint-Malo, Brittany

I remember visiting Saint-Malo as a child, and being completely taken by its fortified walls, encircling a city made of stones and protecting it from the sea – from where my imagination considered pirates might come. To me, it was a corsair city all right, with abundant corners to hide in, the strong smell of the ocean, and incredible views from the ramparts.

It was of course impossible for me not to pass through Saint-Malo on our van road trip in Brittany. And after staying there for a couple of days, parked a short 2 min walk from a beautiful beach, I can only urge you to visit St-Malo too. A day trip to Saint-Malo is enough to visit the inner city, walked on the ramparts and spend some time at the beach. A few more days can make it a more comfortable and more in-depth discovery of this beautiful fortified and legendary city.

1. The colourful history of Saint-Malo

The history of Saint Malo is a rich and fascinating one. The town was first founded in the 1st century BC by Gauls to defend the entrance of the river Rance. It was then a part of the Saxon Shore in the 4th century AD and the site of a fort aiming to prevent invasions and raids. Two centuries later, the Irish monks Aaron and Brendan chose it to establish a monastic settlement and the city then took its name from the Welsh Saint-Malo (or Saint Maclou) monk who fled there from Britain. 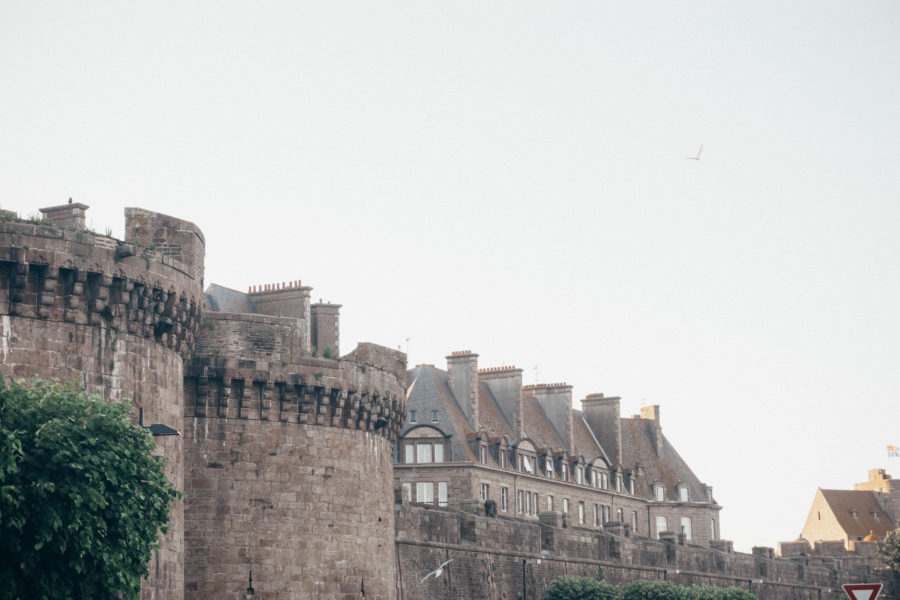 The Bretons are proud and rebellious people, but the Malouins took it even further in the end of the 16th century, when they declared Saint-Malo an independent republic distinct from France and even from Brittany for economical and religious reasons – which lasted for almost 4 years.

Corsairs and pirates in Saint-Malo

It is infamous that Saint-Malo was the home of corsairs, pirates and privateers – forcing British ships to pay tribute and provide wealth. In the 17th and 18th century, the pirates were even granted licence and charged by the king of France to bring back a pourcentage of the profit they made by raiding and capturing foreign ships! 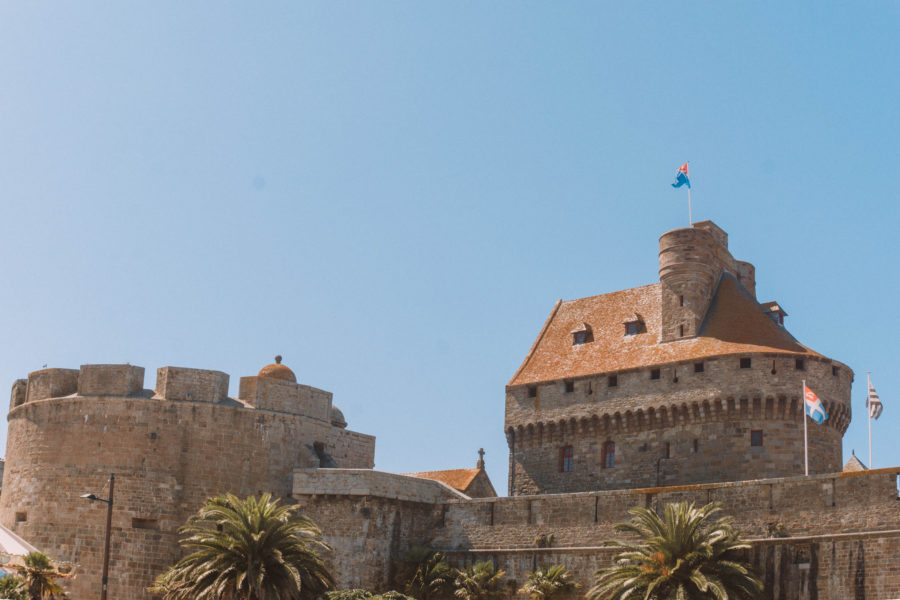 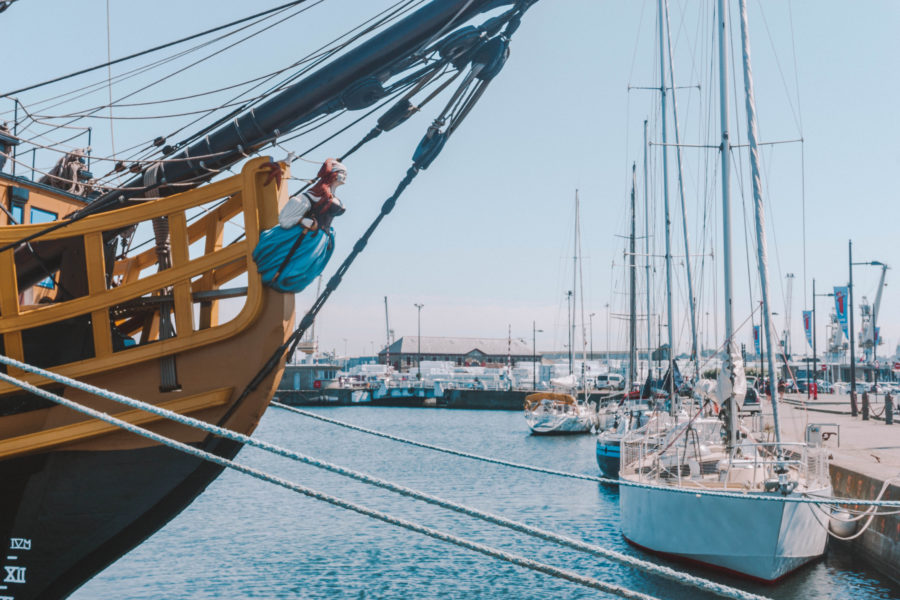 Jacques Cartier, who is said to have discovered Canada, was from Saint-Malo and sailed from there. The same is true for Louis-Antoine de Bougainville who discovered the Falkland Islands which he named Îles Malouines after his home city.

Saint-Malo was bombarded by the Allies (the American and the British) who wrongly believed the walled city to be a huge enemy base. In fact, the Nazis had mainly taken positions outside of the walls and only about 70 of them stood inside the walls, with all of the inhabitants, who were not evacuated. A huge part of the town was destroyed, including the wall, the castle and the cathedral.
It was rebuilt stone by stone, as closely as the original as possible, from 1948 and until 1960. This is why the house still have granite facades and pitched grey slate roofs and that the ramparts, the castle and the cathedral look exactly the same as they did before the bombardment. Saint-Malo is now home to more than 44.000 people, a number five times higher during the summer as Saint-Malo is one of the most popular cities to visit in Brittany. 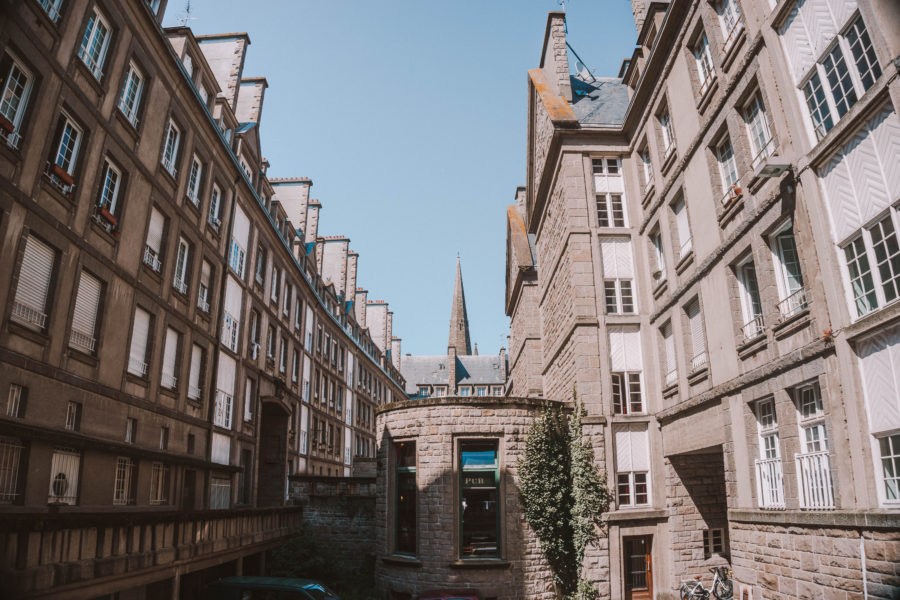 2. The views from the 2km long ramparts

As previously established, Saint Malo is a walled fortified city. One of the best things to do in St Malo is therefore to walk on the ramparts built first between the 12th and 14th century – before being restored by Vauban in the late 17th, destroyed during WW2 and then rebuilt – and marvel at the beautiful views. From up there, you can see everything: the granit facades of the houses, the cute boats sleeping at port, the sea and its beautiful beaches stretching afar.
You can start right by the marina at the Porte Saint-Vincent when you arrive by taking the staircase on the right just after the door to see the breathtaking expensive and old houses. Once at the Saint-Philippe bastion, let yourself be bewitched by the view of the sea and the Emerald Coast. Spot the beaches Bon Secours and plage du Môle on your way to the Bidouane Tower. Then take a minute there to appreciate the view of the two islands of Saint-Malo: the Grand Bé and the Petit Bé, and from the north side the Fort National – the three of them only accessible at low tide. 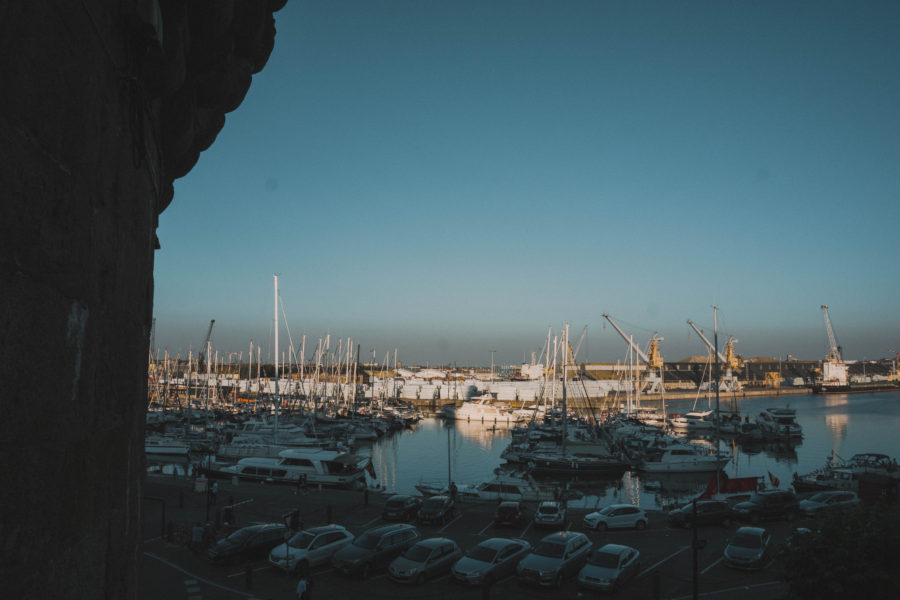 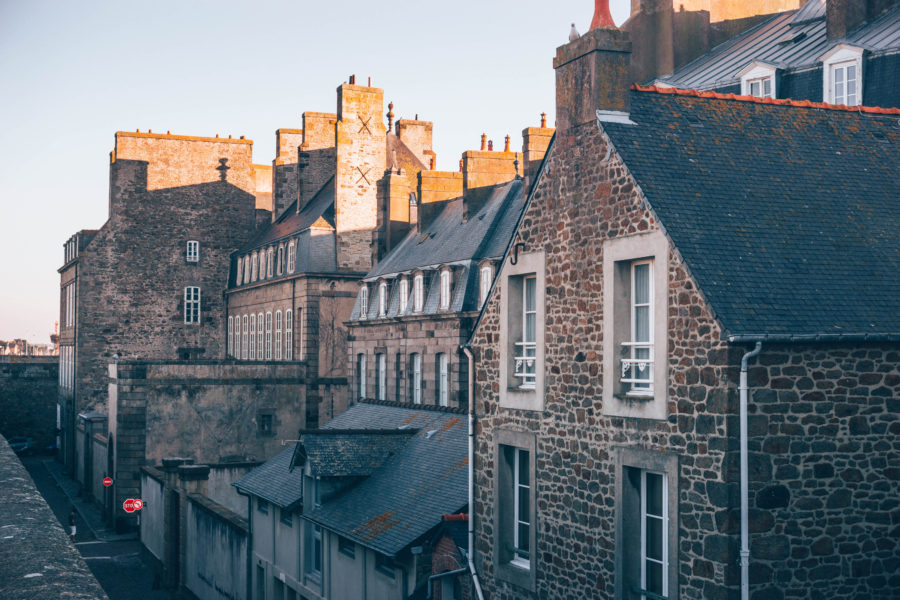 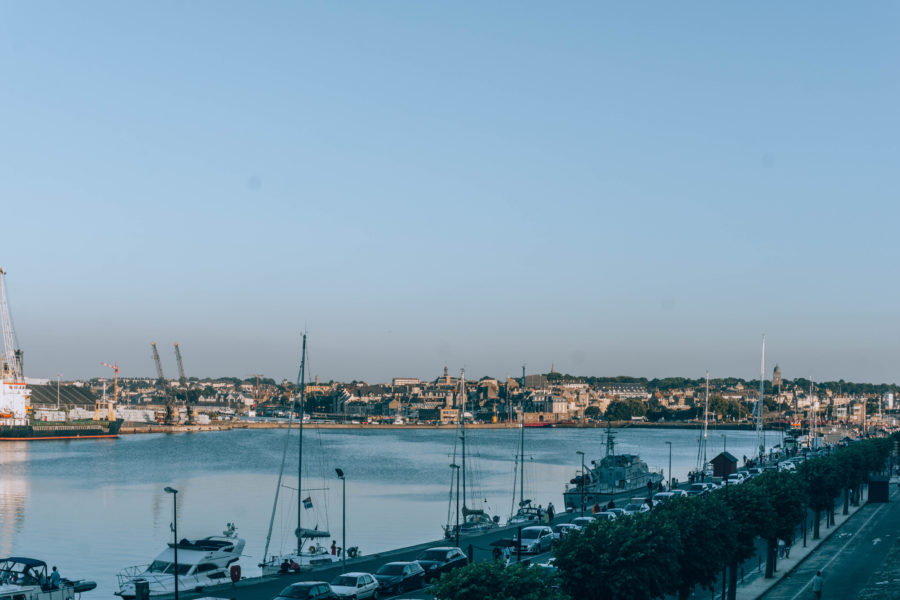 3. The beaches of Saint-Malo

When I say we were parked by the beach, I’m not kidding. A two minutes walk took us to Plage de Mihinic, one of the farther beaches, slightly less crowded than the ones closest to the walled city, but enclosed by rocks and with the promise of an stunning sunset. A bus stop stands just above the beach, and goes to the inner city. 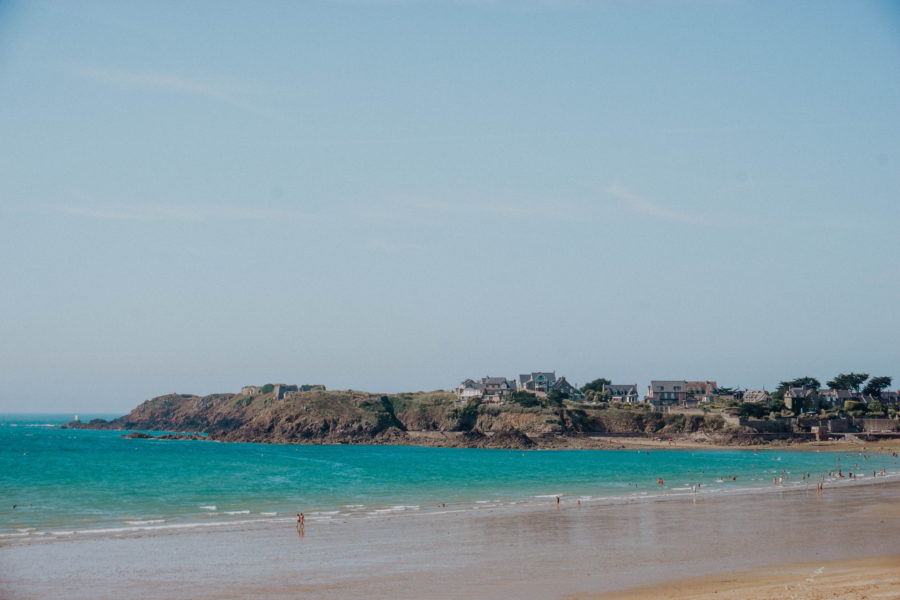 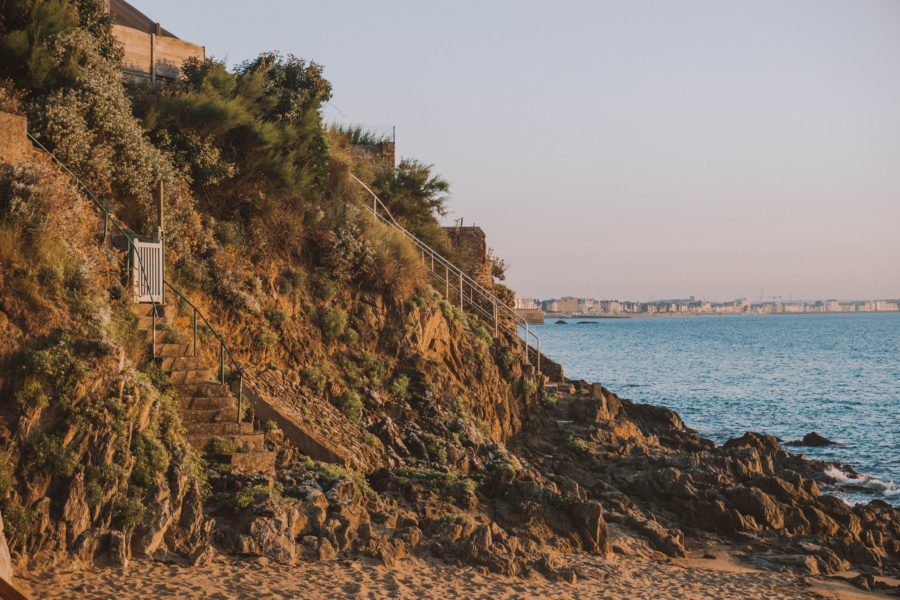 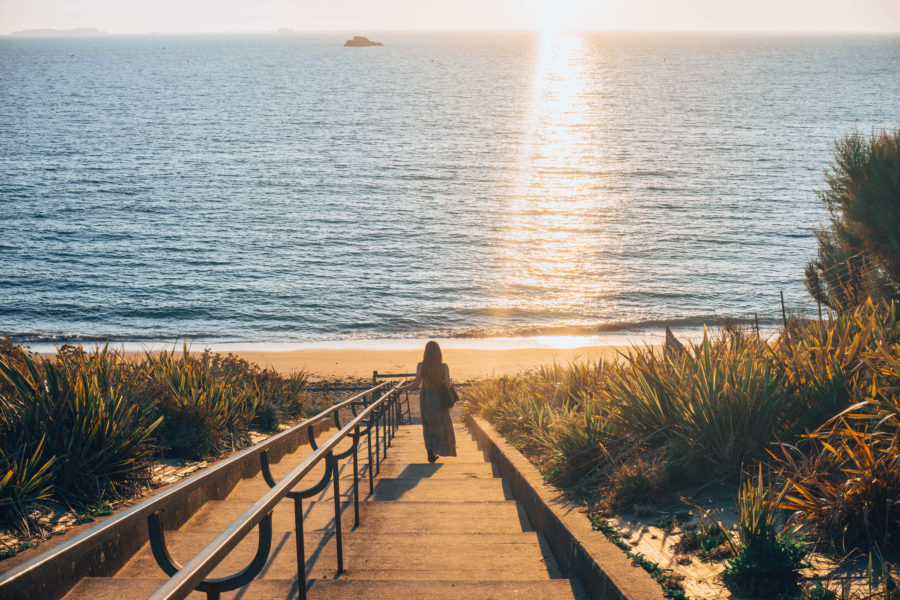 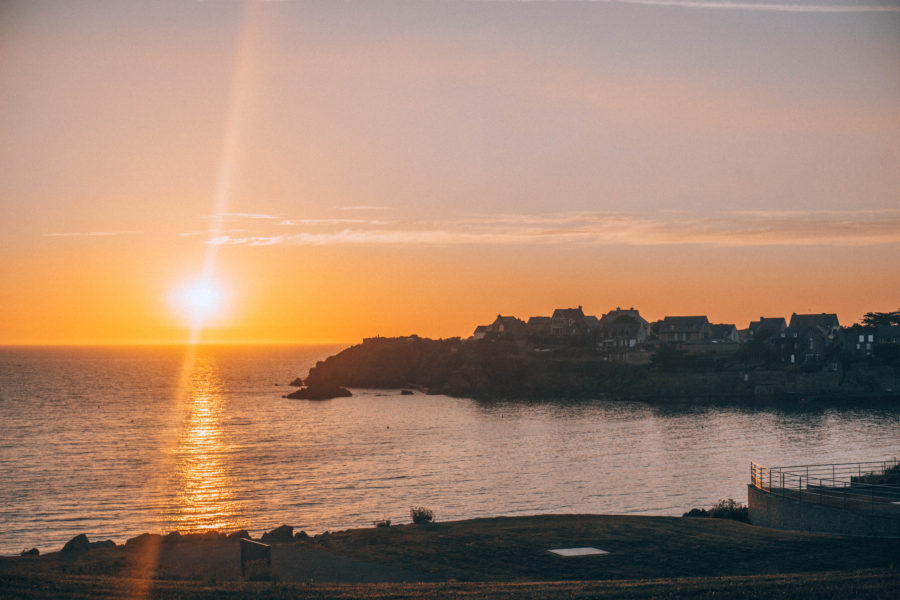 The other beaches are worth a look: Plage du Môle – small and most southerly one -, Plage de Bon Secours – accessible from the northern side of the Bastion de la Hollande and with a seawater pool used at low tides – the beaches of Petit Bé, Grand Bé and Fort National – beware of the tides -, Plage de l’Eventail – a rocky one favored by Chateaubriand – and the Grande Plage – the main sandy beach stretching far outside the city walls. 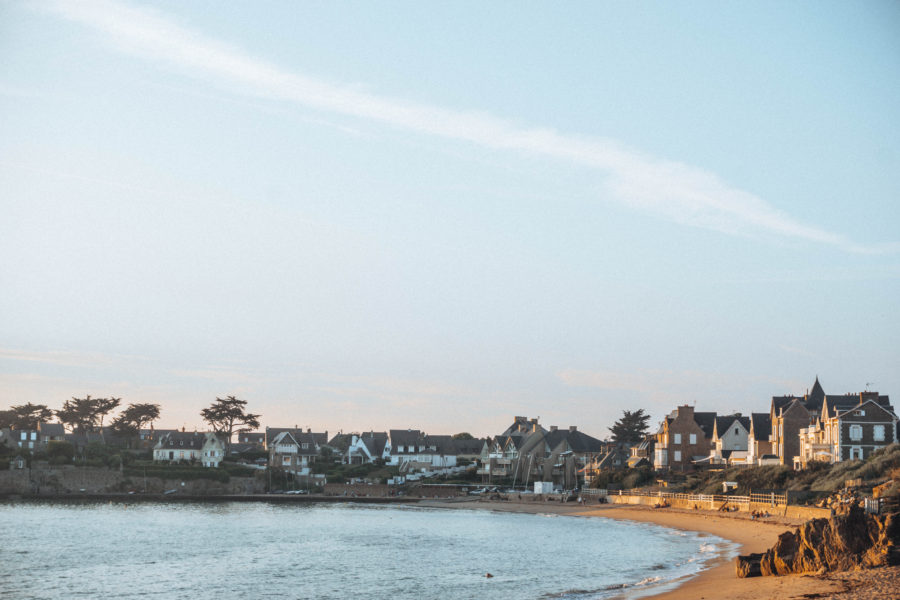 4. The walled city: Things to do in St-Malo

If stepping on old pavements in narrow streets oozing with legends, secrets and history is of any appeal to you, you will appreciate walking around the inner city of Saint-Malo. There is plenty to do, with shops and places where to stop for a drink or something to eat. 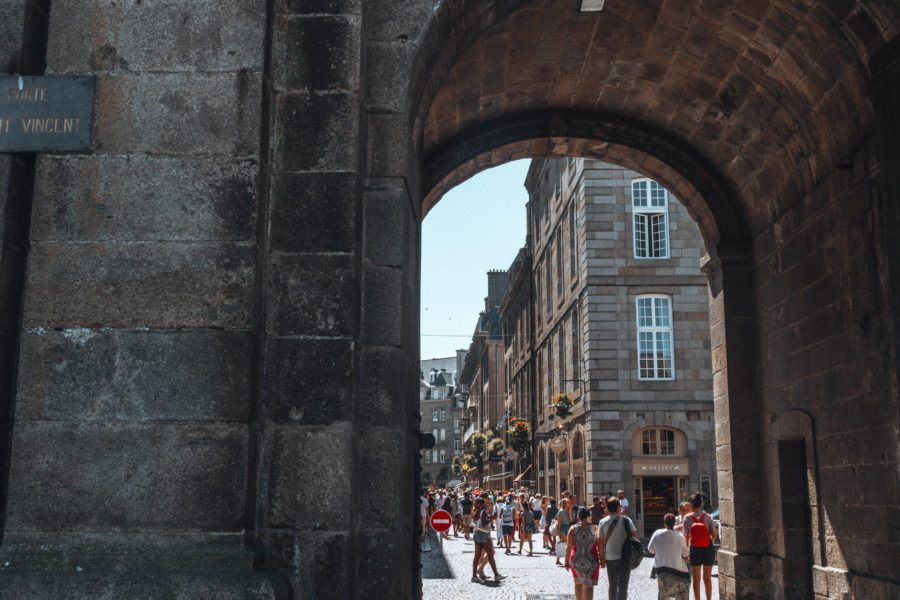 If the maze of streets is too crowded for your liking (as it is usually in July and August) and you’re looking for the one place to stop at, we eagerly urge you to halt at 3 rue Sainte-Barbe. Here stands the corny Café du coin d’en bas de la rue du bout de la ville d’en face du port, the name of which you need not remember, but that will surprise you. Choose your seat carefully. Will you choose one of the benches, a swing at the counter, or one of the romantic booths? Each of them will allow your eyes to inspect the vintage signs, posters, dolls and objects covering every inch of the place. They provide alcoholic and non-alcoholic drinks – if you want something for “l’apéro”, have a kir breton! 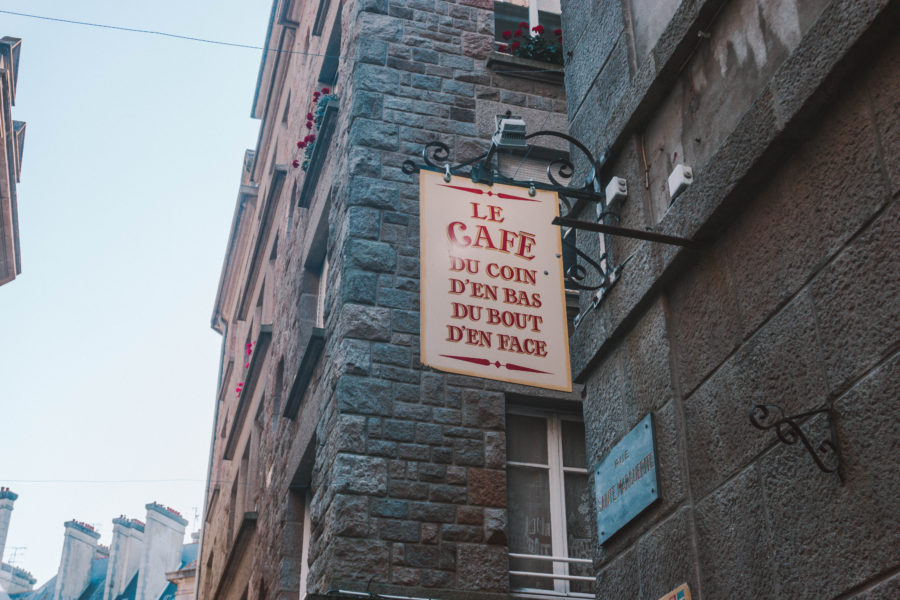 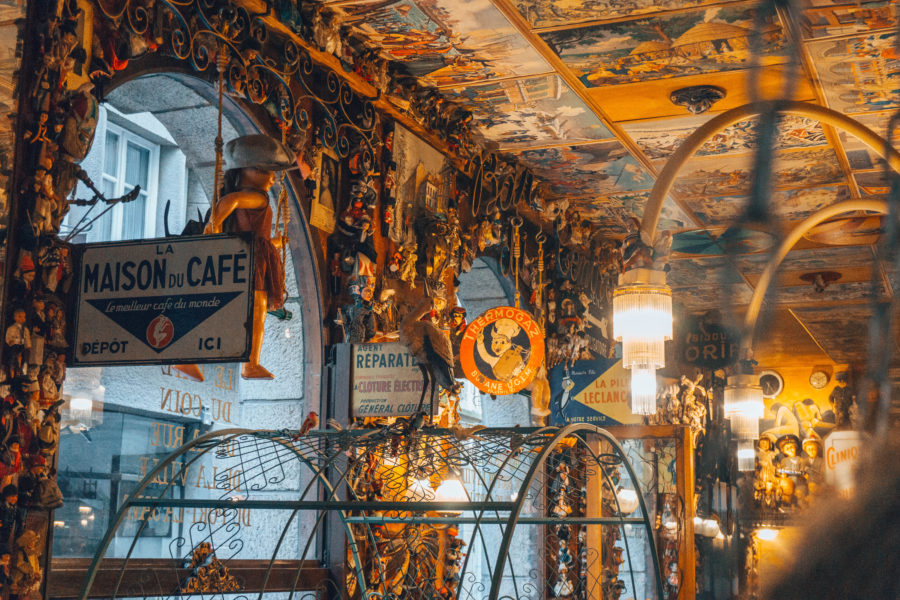 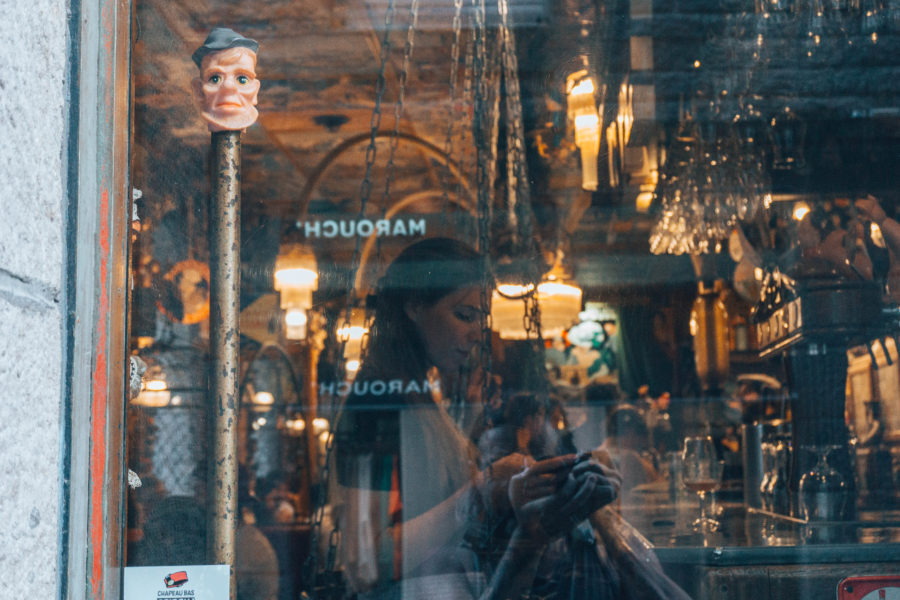 If shopping is more your style, Saint-Malo has shops that will have you busy to your heart’s content, including little “tourists” shops where they sell everything breton. We bought in one of them two shirts from the conscious and breton brand Stered. Their apparel is made in OEKO-TEX certified factories in Brittany and Portugal.

5. The proximity to other beautiful places

Saint-Malo could be a great base to explore neighbouring cities and sights. Facing Saint-Malo, don’t miss the beautiful town of Dinard (which we missed…).

A short drive away will take you to the stunning Mont Saint-Michel and the cute medieval city of Dinan. 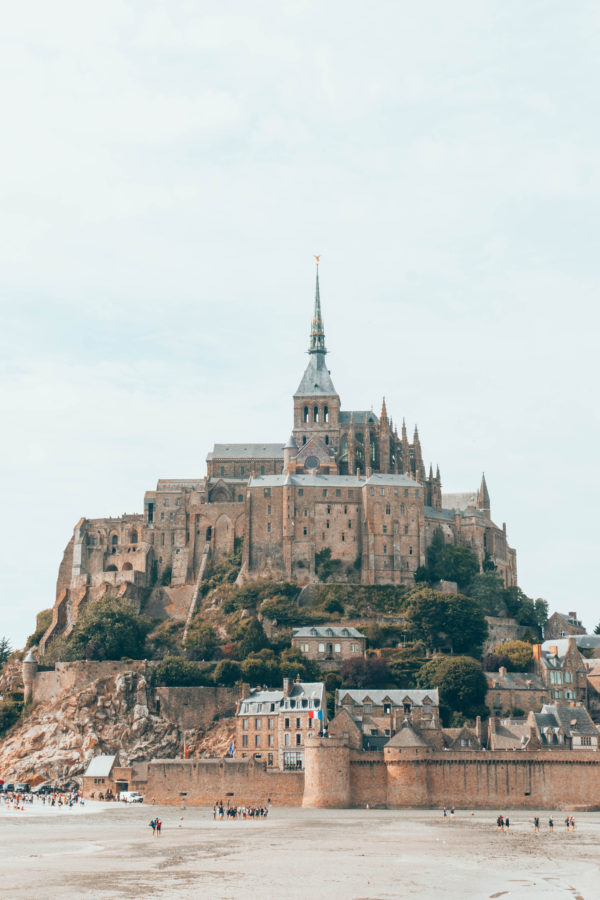 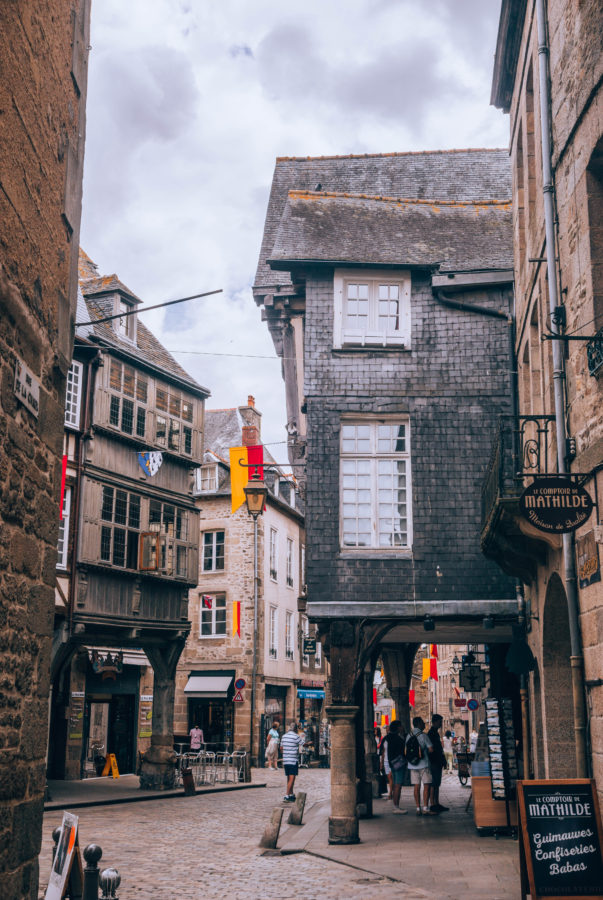 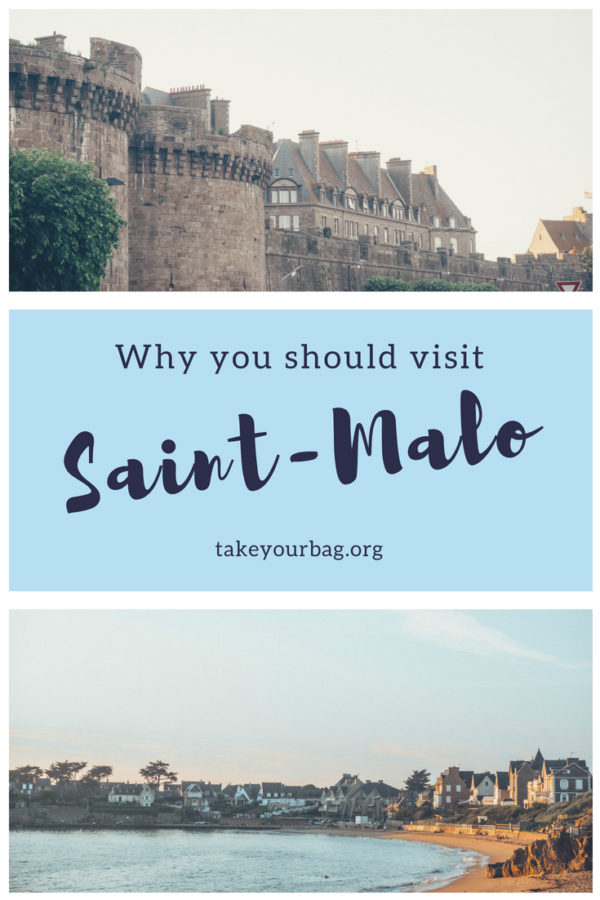 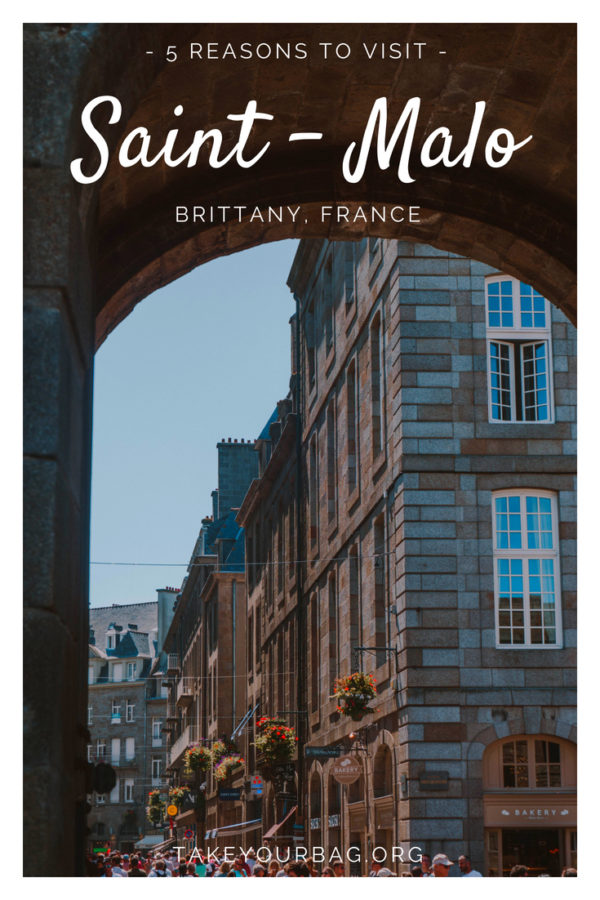 Great post on this well-known city. I would love to visit there one day. So rich in history. Thanks for sharing it. 🙂

Thanks so much to you for maving the time to read it!
It is indeed a beautiful city, almost did not want to leave it.