Van Life Weekly #9 – 1st to 7 October : From Burgundy to Grenoble and then Occitanie (Nîmes & Narbonne)

This week we went from Burgundy (St George de Rennein & St Quentin Fallavier) to Grenoble, and then continued to Occitanie with Nîmes which we briefly visited, and then Narbonne. We didn’t do much of anything this week except baby-related stuff in Grenoble, but we saw some places !

I slept really badly because I had awful leg pains (probably related to posture) and the 1st trimester ultrasound was coming really soon so it was making me both anxious and excited. We woke up with a grey sky and intermittent rain in a random place 5km from the highway but fortunately Simone found a close-by bakery to get us some bread for breakfast. After that I somewhat fell asleep and woke up at noon to a very bored husband, so we decided to move and get us some lunch – and more importantly: water – at the nearby supermarket. After doing some groceries we had lunch in the van (with a treat: hummus!!), I worked a bit, and then we mostly played board games because the groceries stunt had made me feel like crappy crap, as always since I have a roommate in my belly.

When it started to get dark we went back on the road and I worked a bit while Simone drove. After a while he really wanted to stop driving but the Park4night options were not many… I finally found something that looked quite nice and after a few kilometres slalom driving in total darkness, we got there.

There was just one camper parked a bit further under a tree and MAN was that place the creepiest we ever stopped at! There was no way we drove to another place, so we had to power up and make it work. But it was total darkness with a tiny bit of light thanks to some stars, the weather was FREEZING and… wait for it… the branches of the tree we parked by kept scratching the top of the van with the wind, and that was the creepiest of all. Simone even said that it sounded like 1. an animal was on the top 2. We had drove on someone and he was scratching the van. I stopped talking to him for a full 10 minutes after he said that because it freaked me out even more and made me remember all the creepy episodes of American Horror Story we had been watching…

But honestly after eating diner and working and then playing board games (yes, we are badly addicted), it wasn’t even scary anymore and I decided it sounded like a zombie apocalypse was going on outside.
Good night!

As usual, Simone woke me up way before my 9:30am alarm went off. I wonder why I still put it on, maybe just in the hope that Simone might sleep in? Anyhow, while I had a lazy breakfast he went to check around and this place was actually gorgeous in daylight! It was still freezing cold and we were still in the middle of nowhere though, so we went back on the road.

First highway stop: we found electrical outlets to charge everything, yay! The only problem is that they were not working, fact we only found out about AFTER spending an outrageous amount of money for a small breakfast. Well, at least I had a hot drink…

Second stop, this time the plugs were working and we stopped a bit so I could work. While I was busy Simone had found a place to park for the night, and we decided to book yet another appart’hotel for 2 nights in Grenoble to be presentable for the ultrasound and the later appointment at the birthing center.

I have to admit I don’t like RV stops. First, they’re full of RVs. Which totally makes sense but it also makes you feel like you’re in a camping and have you noticed we have strongly avoided those? Also I don’t much like the atmosphere, with everyone checking out what everyone’s doing in a sneaky way… and zero intimacy. Whatever, it was just for one night and it was beautiful around. I only know because Simone went to explore while I was working and blogging.

Can you guess what we did when I wasn’t working? Played board games, yep!!
And had a late diner before I worked again. I have so much work to catch up on after being bed-ridden with the biggest fatigue and nauseas of my life, I don’t even know how I’m going to make it without sacrificing my sleep (which I refuse to be now that I’m hosting a hidden couch surfer).

Nothing interesting to tell you guys, we just drove a few kilometres to Grenoble, and checked-in at the appart’hotel.

We saw our lazy (didn’t want to move from it’s laying on the belly position) 6cm peanut! After resting for a while at the appart’hotel we went out to the cocktail bar we went to the last time, we walked a lot to get back and then I worked.

Friday: from Grenoble to around Nîmes

For our last day in Grenoble we went to our appointment with the midwife. As all was good, we left Grenoble and went back on the road after once again walking a lot.

I was very tired and felt really tense when we finally parked. The fact is that we had not planned on driving for so long but we had two bad parking spots fails… twice we couldn’t find the spot indicated on Park4Night, and had to drive and get lost on dirty roads with absolutely zero light. It was super scary and we were lucky we avoided roadkilling any of the little rabbits jumping on the road!!

It was completely dark and late when we finally parked somewhere near Nîmes.

If you’re interested in going to Nîmes by train and have a tight budget, we can recommend using Ouigo. The prices start at 10€!

With our driving adventures, we actually slept like babies! We decided to go and visit the city of Nîmes as it was a beautiful day. I wasn’t in super shape yet so we took it slow, found a parking spot in the center and walked around, seeing the went to see the Nîmes Arena and the Maison Carrée before having lunch at a random restaurant that could make me a vegan burger. 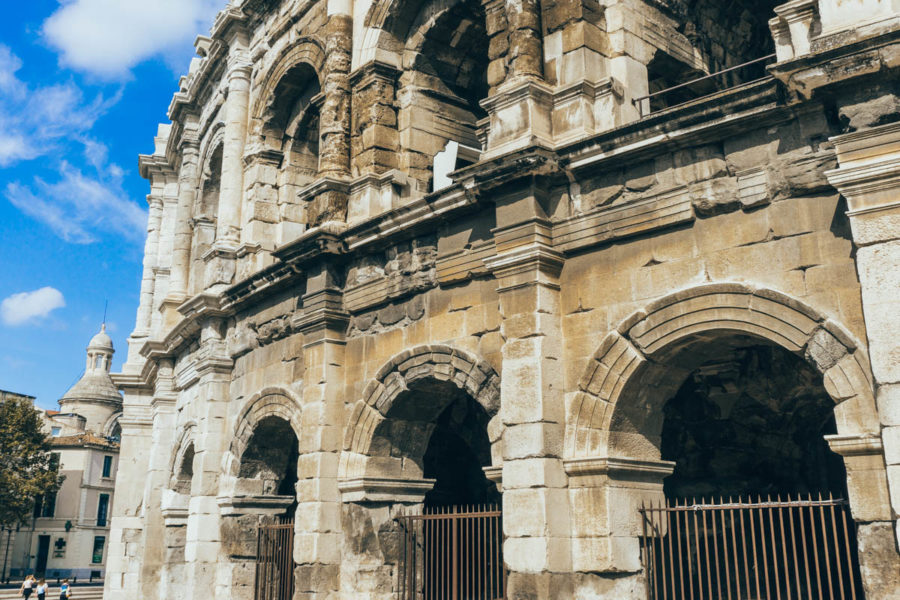 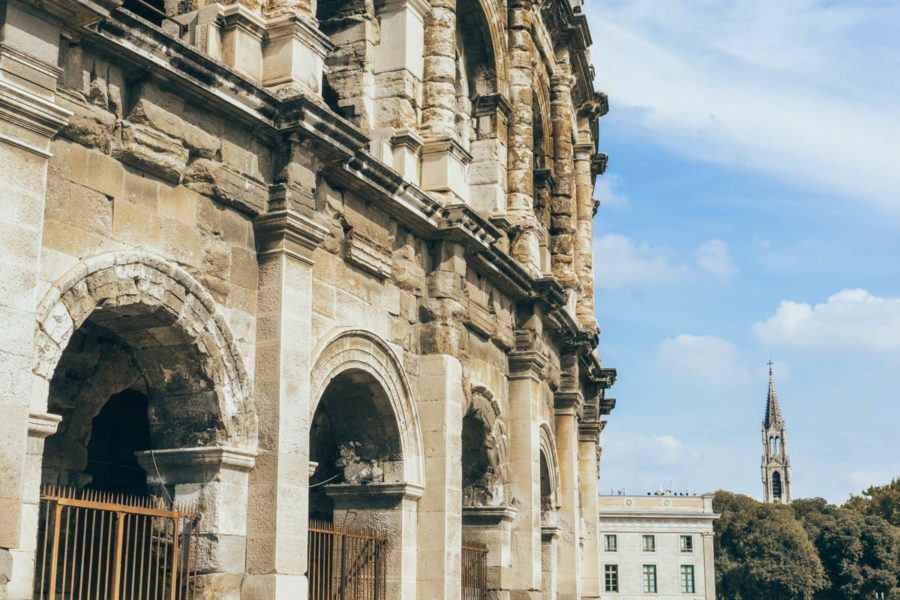 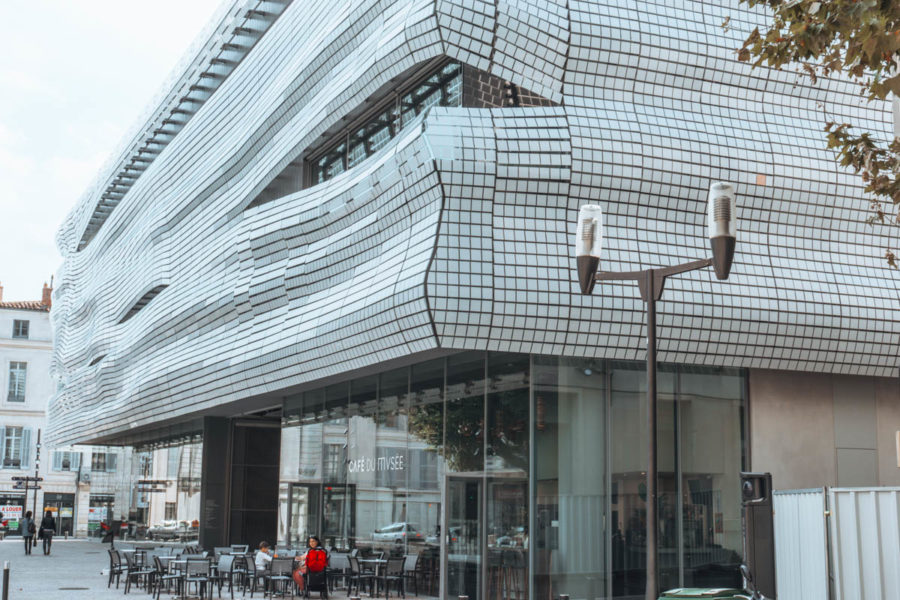 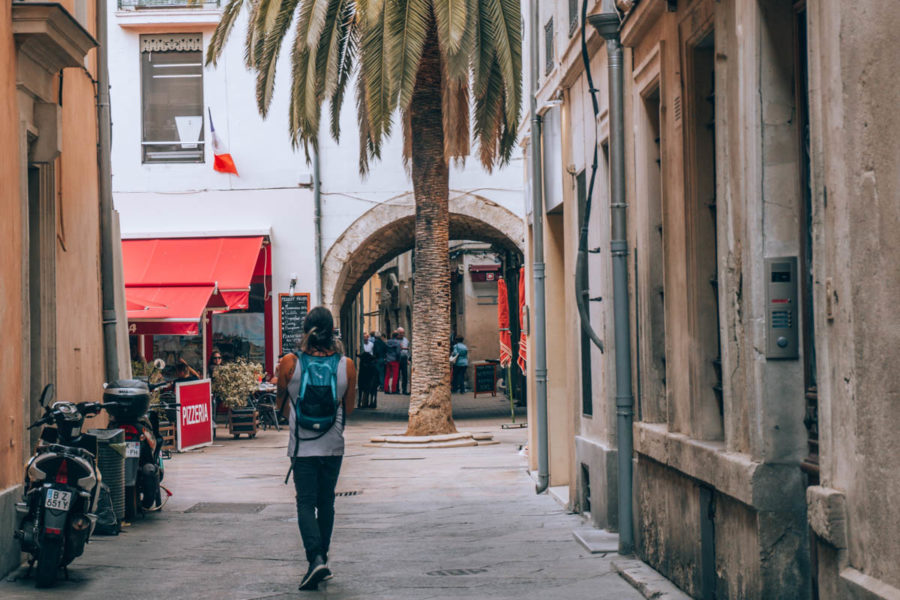 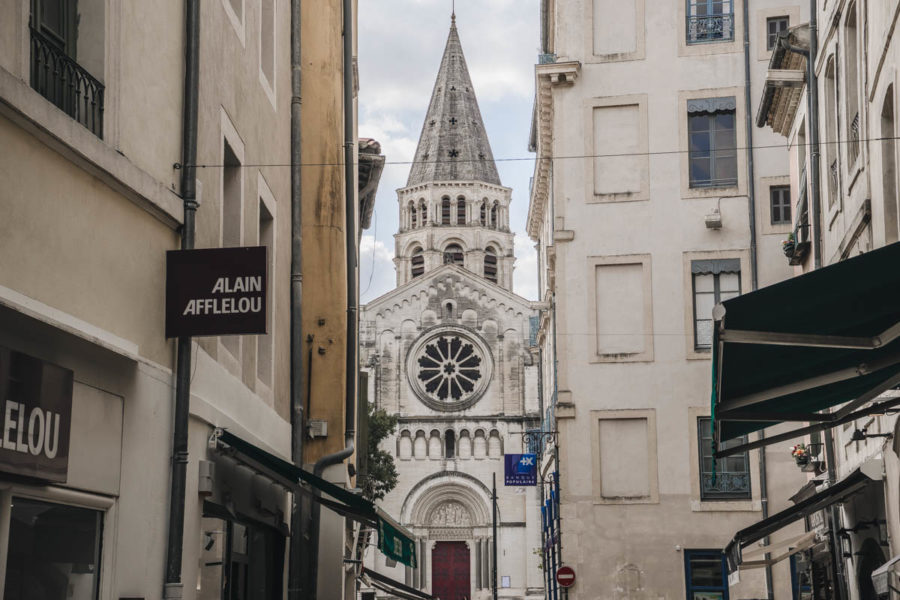 Back to the van, we took a nap before driving to the city of Narbonne. Unfortunately, the place we found to spend the night was a somewhat spooky and dump-like place near Narbonne, but we were too tired to try and find something better.

We spent the day in bed because it was raining… It was honestly super boring since we didn’t have much battery left in anything and didn’t want to use the converter too much. So we only used it to charge my computer for me to work… The place was really shitty but we decided to stay and try to occupy ourselves in the van for the day and see if we could leave the next day.

Tempted to go on a camper van trip around France and discover the beautiful Occitanie? If you don’t want to buy a camper or an RV, you can always rent one! Check prices and availabilities on World Wide Campers! 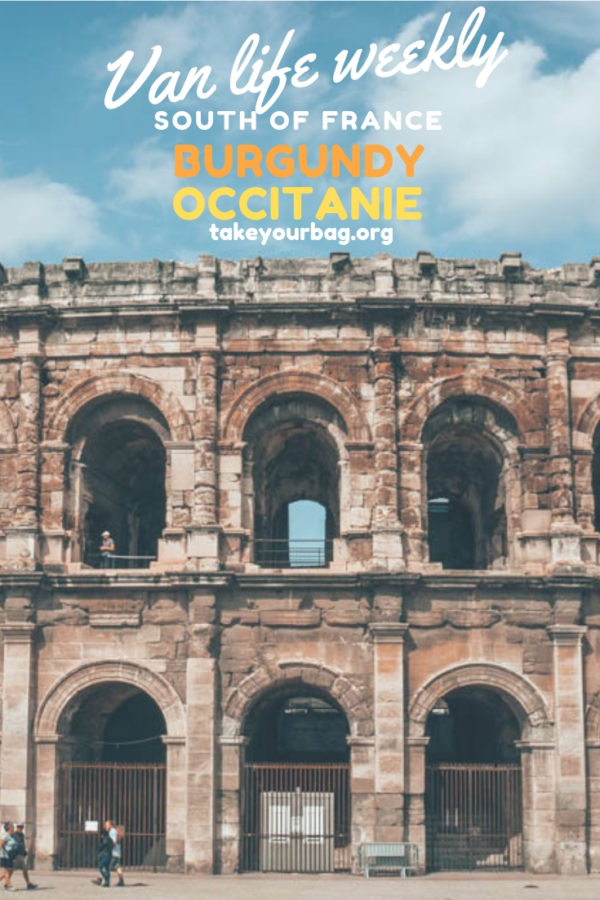