If you follow us on social media, you might already know the reason why we’ve been pretty boring since the end of our Brittany road trip, which is because I got pregnant and I swear I had no idea I would get so tired and sick!

Anyhow, since the end of July I have spent most of my time lying down on the bed or on the beach, trying my best to fight against the gigantic waves of nausea I had all day, and doing my best to stay awake when all I wanted was to sleep. The other consequence of that pregnancy is that we had to decide where it would be monitored, where we’d have to settle for a while, and ultimately where I would deliver our first mini-vanlifer. I’ll pass the details, but we set our eyes on places in Grenoble and Nancy, and made appointments to visit them. Which, you now understand, is why instead of going to perfect our tans in Spain and Portugal, we drove across the South of France to reach Grenoble in time for our appointment.

Monday to Wednesday: Beach and work in Biarritz

The days in Biarritz kept going as before: Simone would go run, swim, use is bodyboard at the beach in the morning while I would eat at snail speed the breakfast he would have brought me early in the morning, I would sometimes accompany him and get some down time and some sun, and we would also spend some time in an overheated café to work on the blog using the electrical outlet and the WiFi.

When we finally had to leave Biarritz, Simone was the saddest I’d seen him for a while. I remember very clearly his distaste for the city when we first arrived, but a few days had been enough for him to fall in love with the place… Who knows, we might go back! 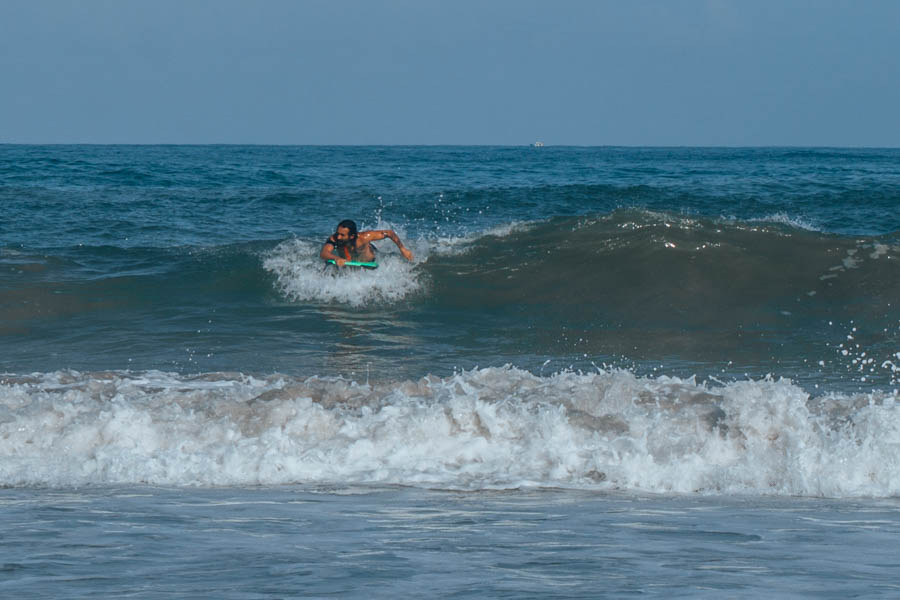 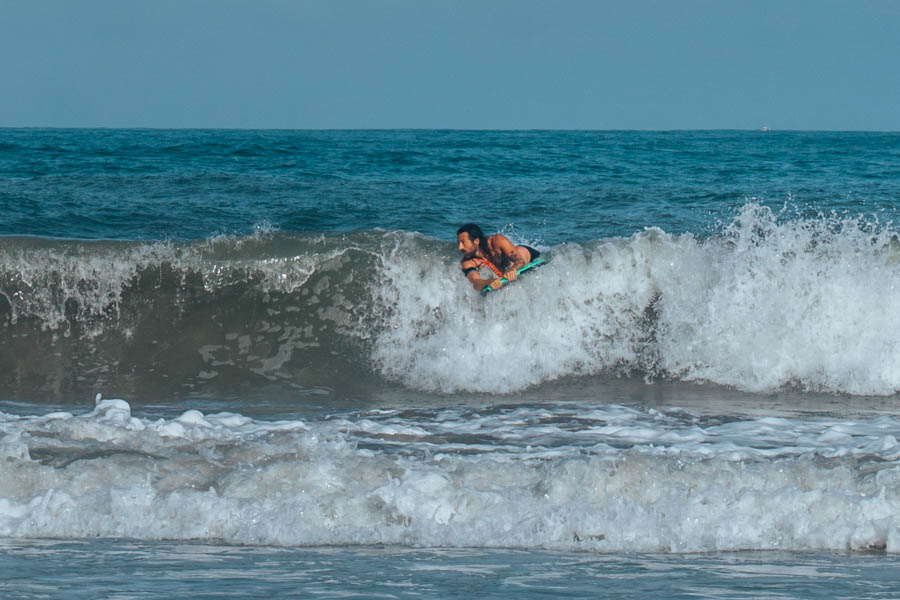 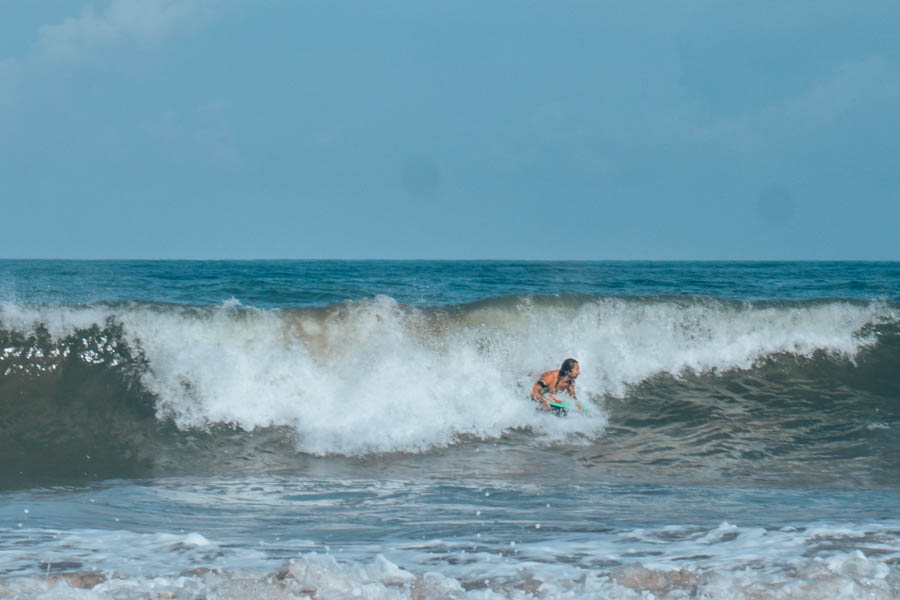 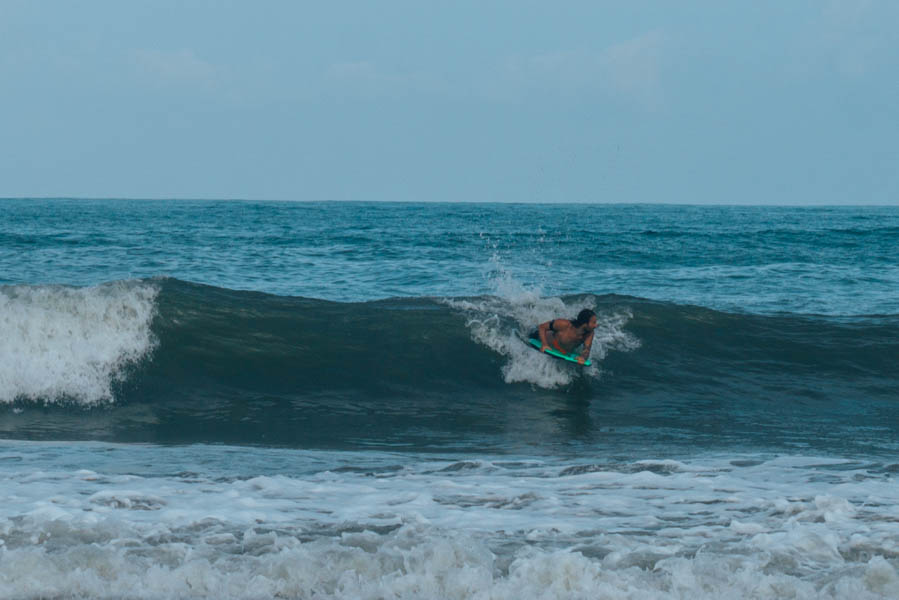 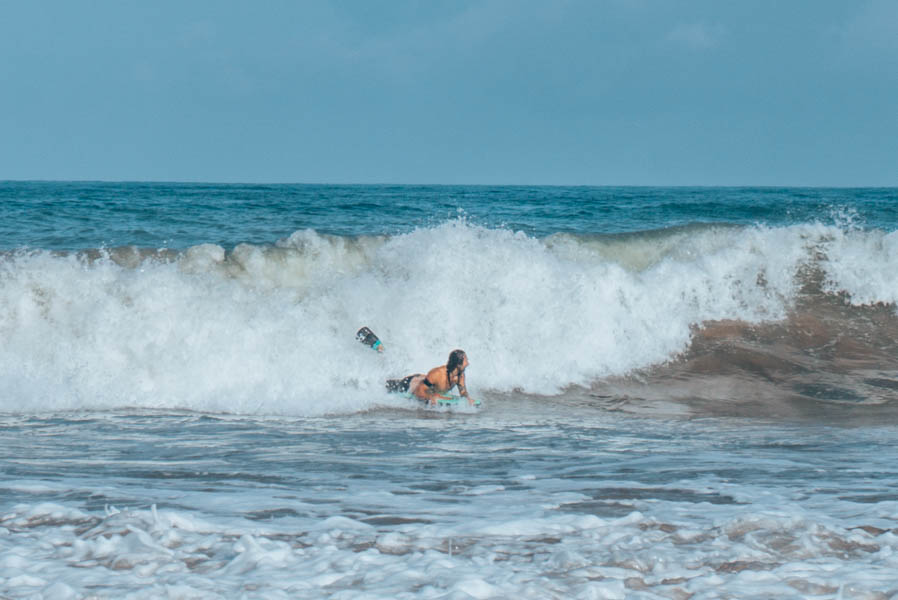 Thursday: on the road from coast to coast

On Wednesday night we must have stopped to sleep somewhere but for the life of me I can’t remember or find any trace of it. I’m writing this way later and I had no notes for this day so…

What I can say is that on Thursday we drove until we were on the coast again (a bit further than Narbonne)! We parked on a parking spot in front of houses (not our fav way to sleep) and the wind was INSANE!

Friday: From Saint Pierre la Mer to Sernhac (around Nîmes)

When we woke up at Saint Pierre La Mer Simone went to explore, and soon we had packed all our beach stuff and crossed the street to put our ass on the sand. The beach was empty, and the wind was brutal. While Simone used the sea as his personal swimming pool (from the Atlantic to The Mediterranean the water is veeeery different and there was zero wave), I was continuously whipped by sand. But I felt so peaceful there that I didn’t even mind. I tried to go swim too but nope, the water was definitely too cold for me!!
We spent a good chunk of the day in Saint Pierre la Mer, to relax on the beach, eat and rest before going back on the road. 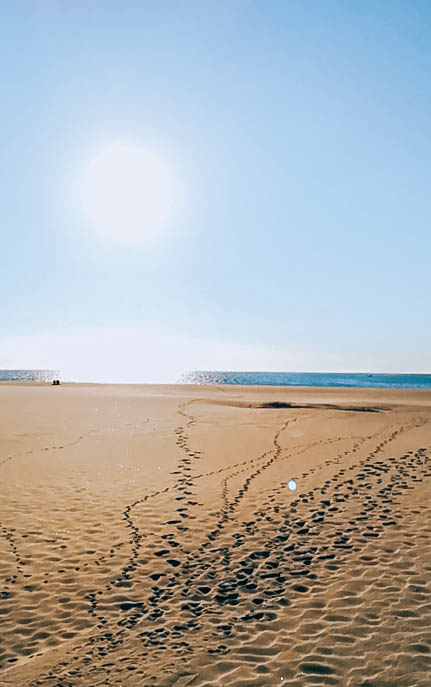 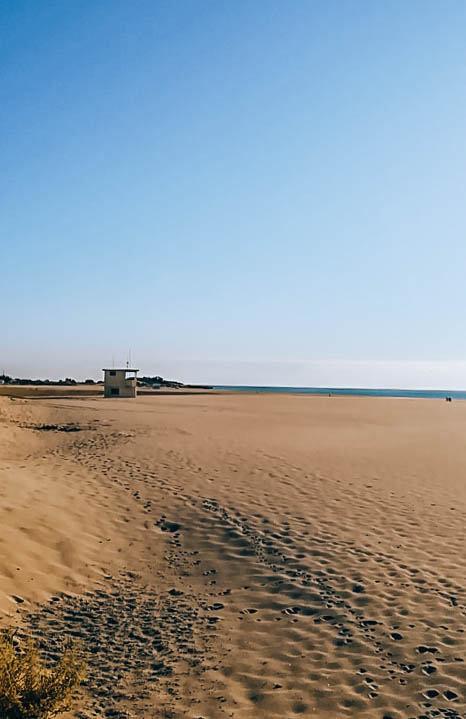 It became clear that Simone had gotten sick and that really wasn’t fun because that meant that the both of us were pretty useless. We were a sad sight to see… but he had to drive a little bit each day so we could make it to Grenoble on time… not fun.

At night we arrived to our parking spot of the day, and it was a sight to behold! It kept striking us how many beautiful and unexpected places we were seeing on this trip, really discovering France as it should be. 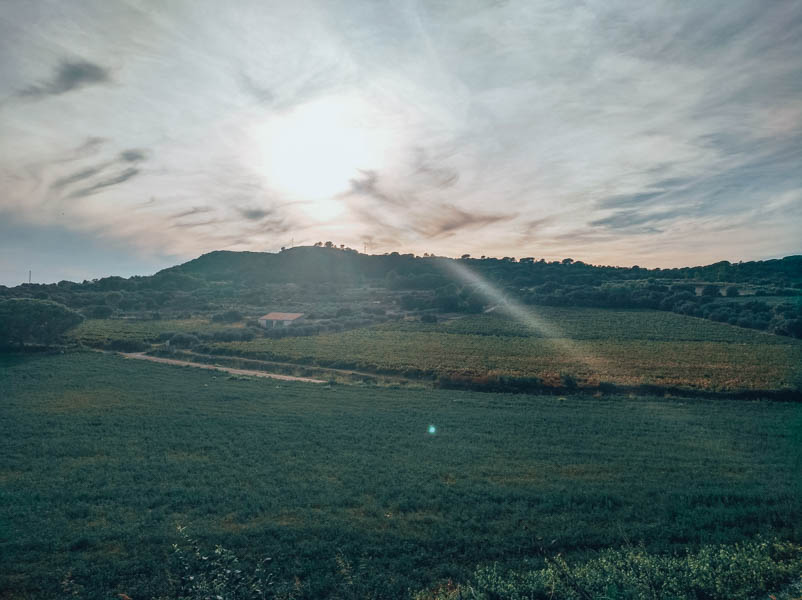 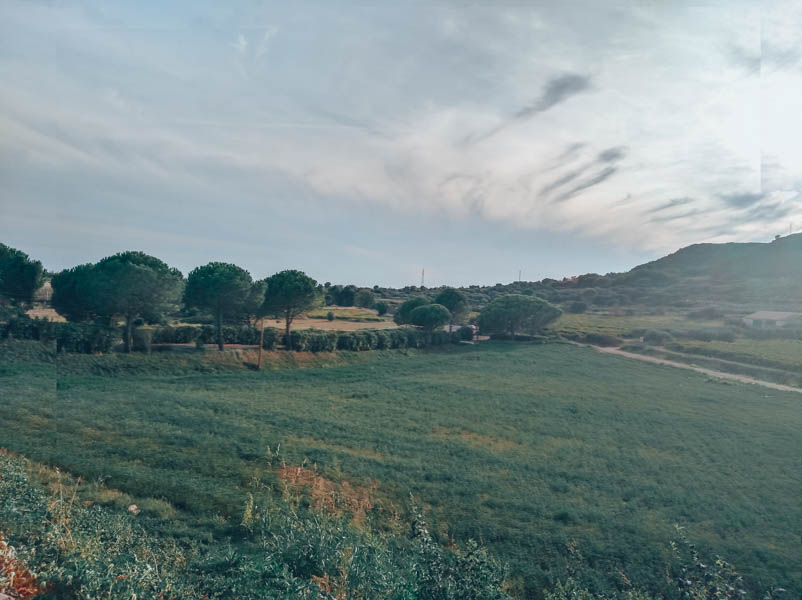 Saturday: from Sernhac (Nîmes) to around Grenoble

Is being woken up at 6am by hunters something you’d find fun? Me neither.
We had completely forgotten that hunting season was a thing and the noise didn’t make me like hunters any bit more. How that is not outlawed yet is beyond me. However they finally left after a good two hours and it was time to start our day by soaking in the sight that this place offered us.
We tried not too stay too late because we really wanted to get as close to Grenoble as possible by the end of the day. 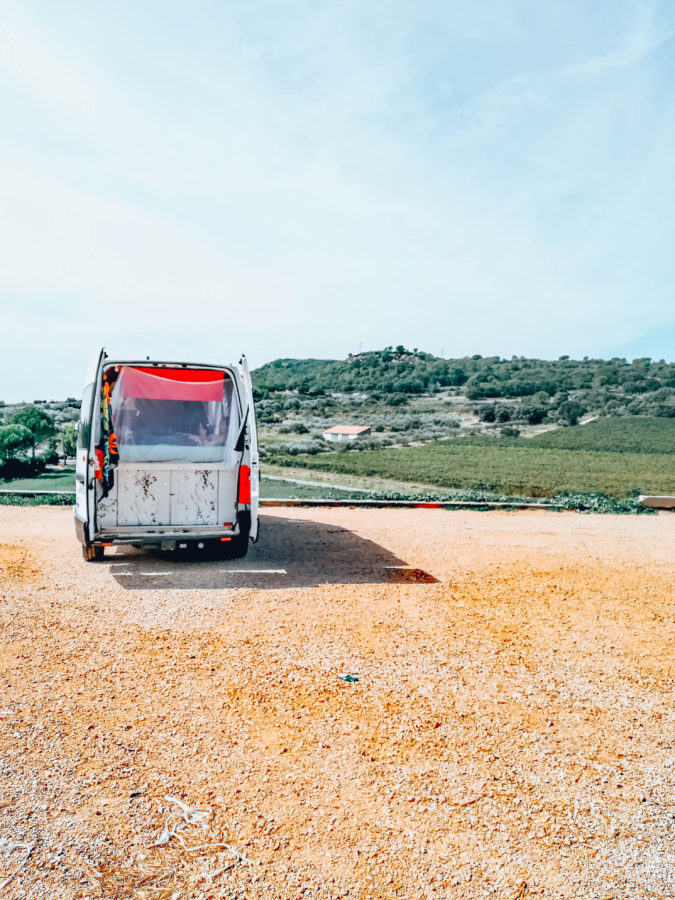 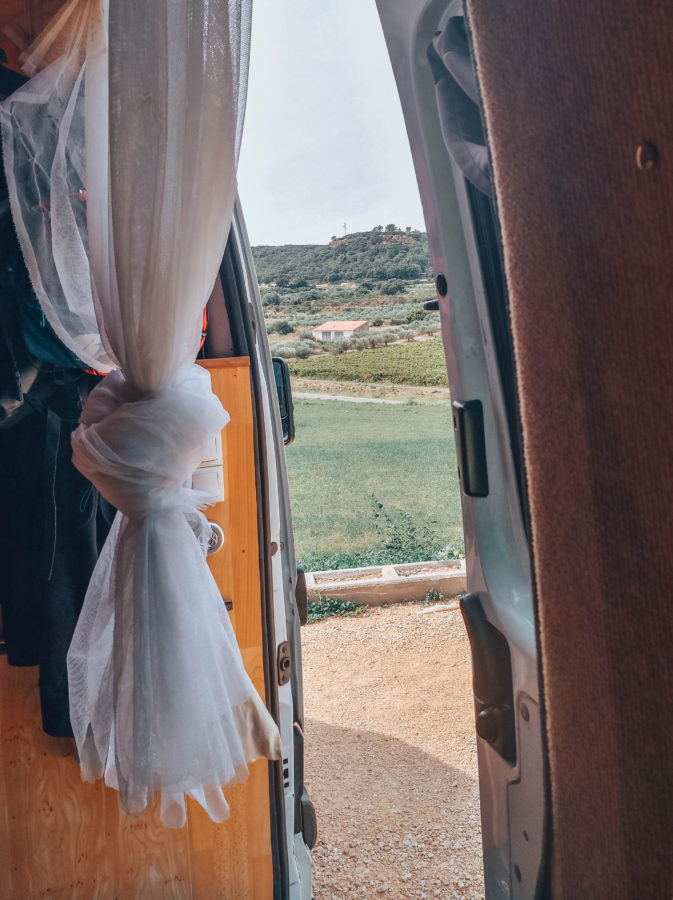 As night fell around us, we came closer and closer to the mountains, and I think that’s no secret that it is breathtaking. It reminded me of the time we took an overnight bus to go from Verona to Rome and went through mountainy landscapes at night and I couldn’t close my eyes because it was too beautiful to allow myself to fall asleep. Well, that time was similar, I couldn’t get enough of the little towns and the mountains and the stars above.

We tried a first night spot but it was not good: some people were having a party at the communal room so we wouldn’t have been able to sleep or even park. So we went for another spot, and Simone was starting to be really tired so we weren’t too picky when we arrived on the supermarket’s parking lot and a guy was having a party (sex or drugs, pick one) in his car a few spots further. He eventually stopped and no one bothered us, so not complaining!

The good side of sleeping on a supermarket parking lot is that you don’t have to move to get food and water. The bad side is pregnancy makes me automatically sick the second I step into a grocery store. But Simone really felt sick so I did most of the shopping by myself before he joined me to help with the bags. Which was only fair because he’s been doing absolutely everything since we were made aware of the peanut.

The 25km drive to Grenoble was pretty amazing because we went through cute mountain villages and I kept screaming « I want to live here! ». Then we got to Grenoble and wow. This city is not pretty. The outskirts look gorgeous, but once we got in it was just dull buildings and sorry streets. Anyway let’s not judge Grenoble too fast as we’ve only seen a small fraction of it, so there might be prettier places to check out.

We parked close to the appart’hotel and checked in. Do I have to speak of the happiness of having a shower with hot water running, a working fridge, 24/7 electricity and WiFi?

Tempted to go on a camper van trip around France and discover the French Pays Basque? If you don’t want to buy a camper or an RV, you can always rent one! Check prices and availabilities on World Wide Campers! 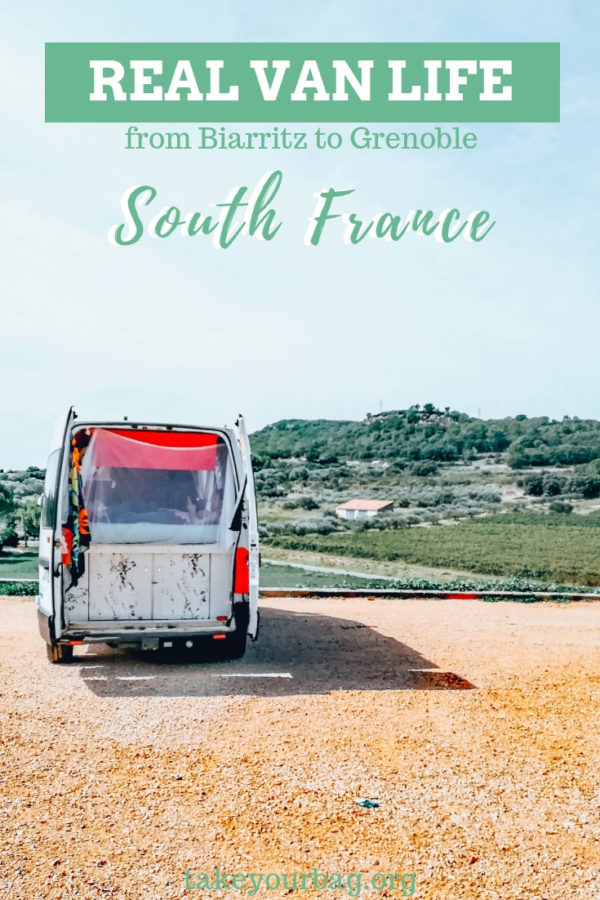 Huuuge congrats for your pregnancy!!! I wish you the best and get better 🙂
Keep on sharing those beautiful pics from your adventures… love it!

Congratulations with the pregnancy! 🙂 I’m sure you’ll love the South of France – those waves look amazing in any case!! Curious to see how the next weeks will unfold!

Thank you!! The South of France was amazing, can’t wait to explore it even more! Stay around to catch our next van life weekly 😉

Its so amazing to see how you are discovering France and taking all the things in your stride. Congratulations and am sure the excitement would be high to welcome your own mini-vanlifer. Wish you all the best with everything and take care.

We are always talking about doing van life so this is really inspiring to read! We are actually visiting part of France along this route next year for our friends’ wedding so it gives us a bit of a taster for the scenery 🙂

Felicitations a vous!!! Yeah, Grenoble outskirts is really beautiful but the actual city is dry lol. I like centre ville but that’s about it. I spent a gap year before college in Grenoble & I would always visite Paris every month because Grenoble was boring…especially because je suis Anglophone. I took French classes in Grenoble & I loved the tram system so I didn’t go too mad. Bow that I’m older (&hopefully wiser), I’d explore the mountains and the towns around more. Pray you have a safe birth! xx

Merci!! We’re actually starting to like Grenoble more as we’ve been going around a lot to find a house. It seems to be better than we thought at first, so honestly we just can’t wait to explore it more AND enjoy the mountains around!

What a great way of seeing a beautiful country. The van life sounds romantic, but I am sure that it has a downside to it as well. Enjoying an empty beach is a special moment in today’s busy world.

Yes, we’ve been trying to show the good and the bad from van life 🙂

I just got back from a trip to Grenoble in France. The area is magnificent. It is fresh, lush and perfect for a short getaway. It is set against the backdrop of the Alps and with skiing and lakes not far away it is the perfect place to stay all through the year. Hope you start getting better.

Thanks Tony, I’m feeling much better! We’re starting to see a bit more of Grenoble and the area and honestly we can’t wait to see it all!!

I’ve always wanted to live in a van (especially to tour around), but never really understood it all. Your weekly posts are super helpful in helping me to understand the process and what it is actually like (not the romantic ideas my friends have given me). Thanks!

I’m so glad this can help you understand the reality of what vanlife is!