With Van Life Weekly we keep you update on everything we’re doing on a daily basis while traveling in our converted van around Europe. However it didn’t start with the beginning of our trip around France and Europe in our converted van, since we started in Paris on July 2nd (and since then been to Belgium, Rouen, Lille, on an epic road trip in Brittany and a week with family in Auvergne and visited the town of Bordeaux before heading to the beach in Cap-Ferret and going to Agen).
This week we spent some time in Agen and went to see its peculiar canal bridge before getting us some surf life in Hossegor, Seignosse, and arriving in Biarritz at the end of the week. 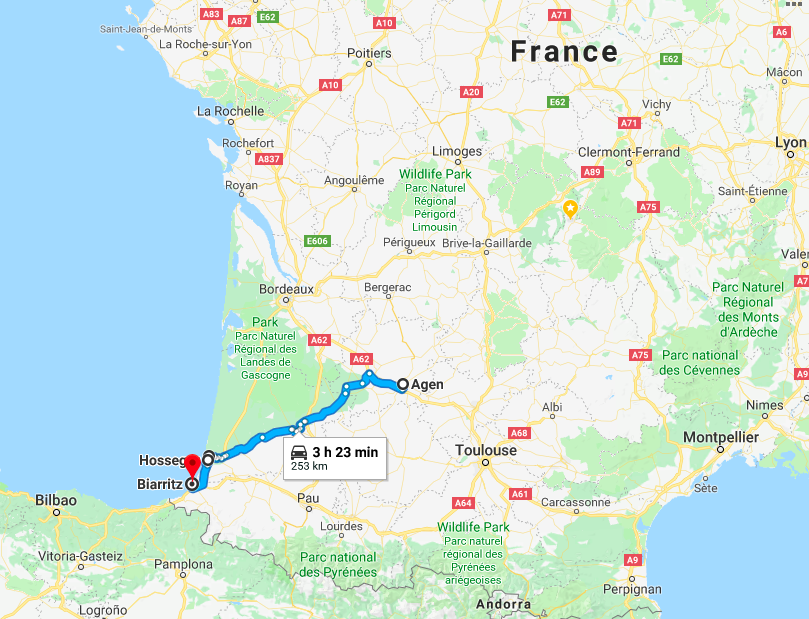 The day before, my godmother had offered to leave the house to us while they were going to see family in another part of France. Of course we were really happy to be able to enjoy a comfy bed and a big fridge, so we decided to stay! Before they left, my godmother took Simone and I to the peculiar site of a water canal bridge on the river in Agen. It was quite a sight and a nice ballad. Apparently, it’s the only bridge of this kind in France, too bad there aren’t more because it’s really pretty. 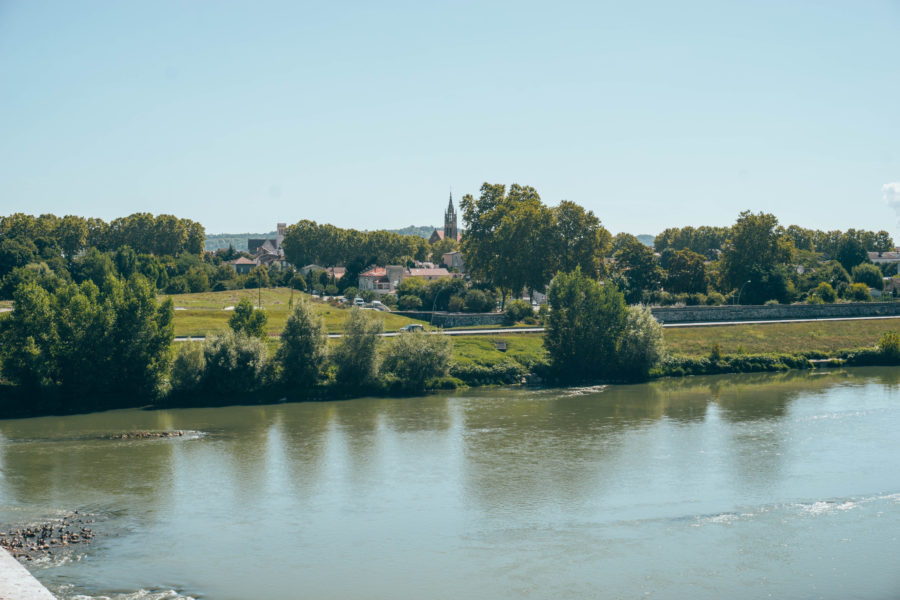 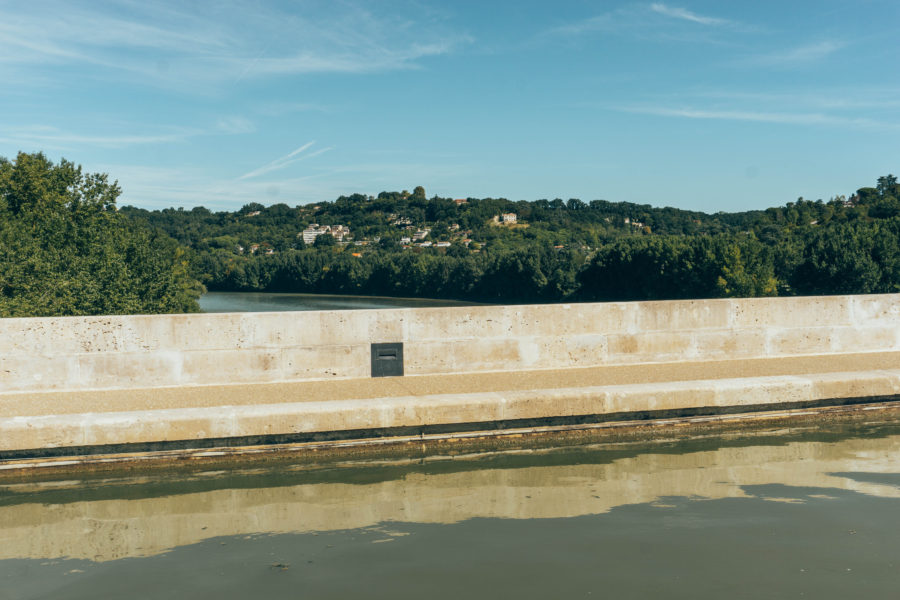 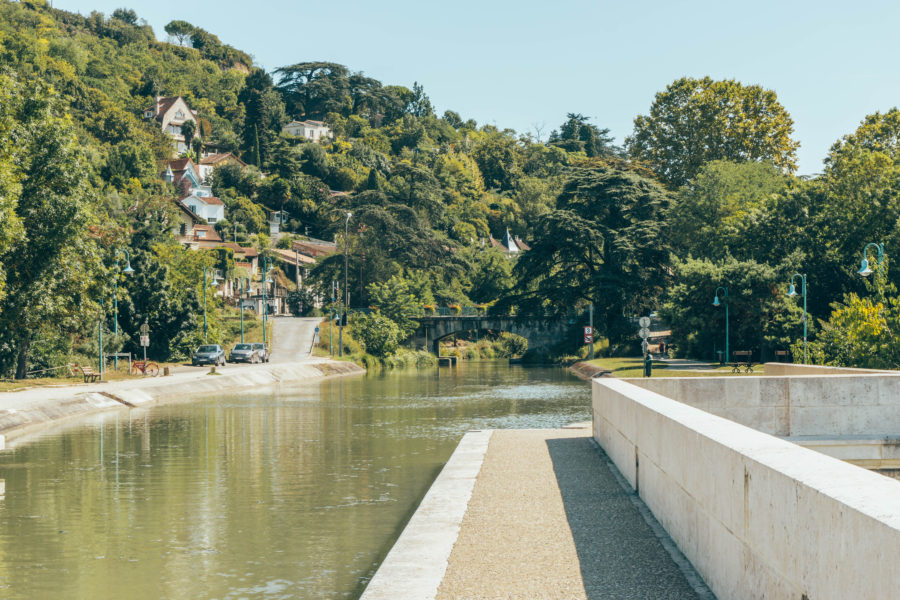 Nothing really interesting here, we took advantage of the fresh house to play board games, watch plenty of tv shows, relax, nap, eat… you know us!

Most of Thursday went as the previous days – which was a bit unfortunate as it was Simone’s birthday!! – until our hosts came back and in turn we left the comfort of the house.

It was time for us to get back on the road, so we headed to the South West coast of France, where surfers have a blast.

We were pretty worried about finding places to sleep, since it was very clear that Hossegor (our target city) had air-tight regulations on RVs and campers. Basically it’s forbidden for a camper to park for the night anywhere but at the dedicated area, which are not free (and didn’t look overly appealing to us either). However I had spotted a couple of places outside the city on the Park4night app that we might be able to use.

We left in the evening, when the sun wasn’t so hot anymore, and arrived at night. The road had been mostly enchanting, as we were approaching the Landes. We stopped on the road for a pizza (vegan for yours truly) and stopped at the first place I had spotted, around 25km from Hossegor. It was a pretty much empty parking lot that we were expecting to be full the next morning for market day.

We were dead-on right about the parking lot being full as we woke up! Simone went to buy us some breakfast and we took our time to get ready before driving to Hossegor. I had never been and didn’t really know what to expect, so I had googled where to go to find a nice beach. We decided on Les Bourdaines beach, which I only learned later is in Seignosse, not Hossegor.

The weather was a bit grey at first, but it didn’t matter, it felt great to be on the beach – especially in the morning as it wasn’t crowded at all. As expected, the ocean was full of surfers, providing great entertainment for us. 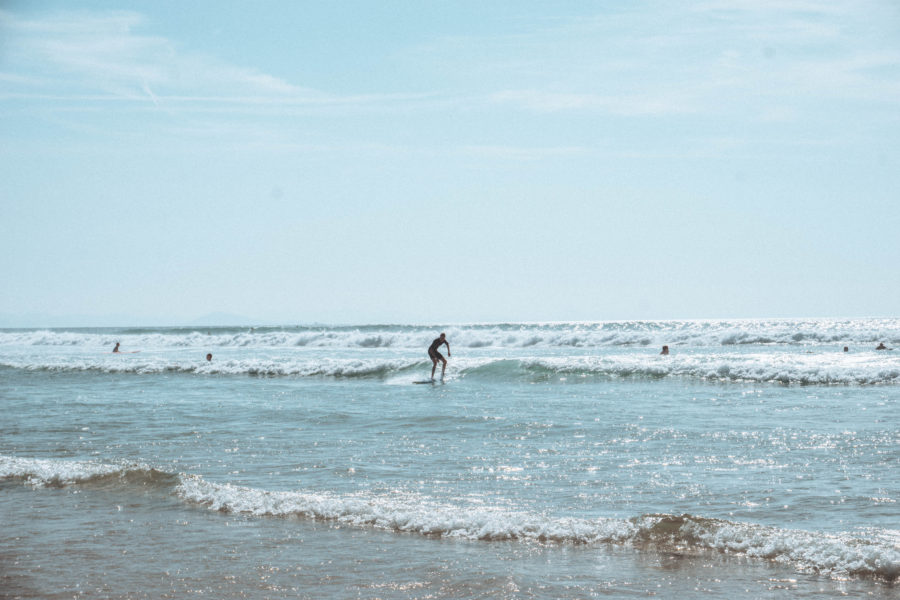 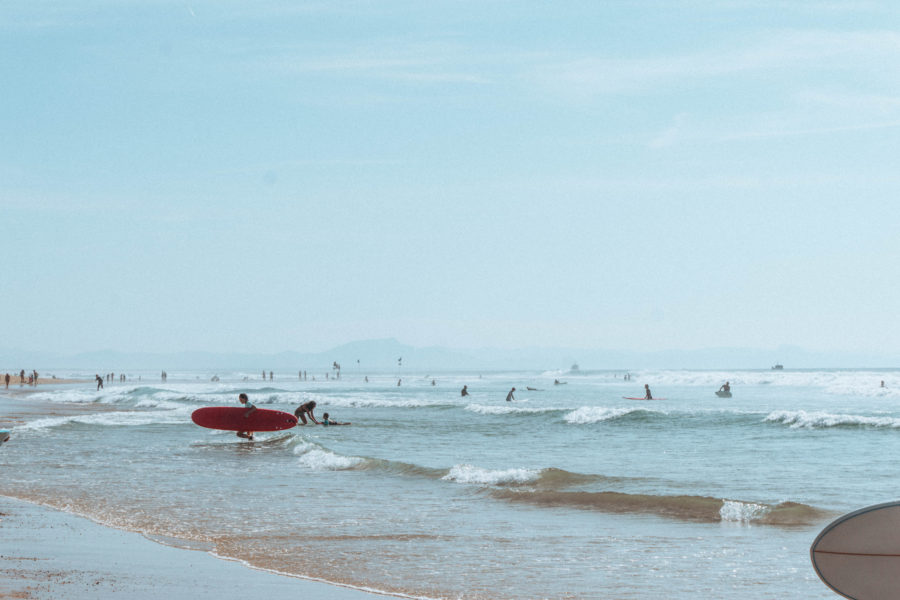 At lunch we went to the restaurant by the beach where I had a nice soba salad and… a lemon sorbet!

We had noticed Hossegor at a place with outlet and factory shops and decided to head there right away, as I wanted to get Simone a bodyboard for his birthday (I’m the queen of late presents). Long story short, we only left with a new cute pullover for me.

Since we hadn’t found the bodyboard, we went to Hossegor city center to check out the surf shops over there. Once again, we didn’t find what we were looking for. However we did find a place to eat with a couple of vegan options.

A vegan burger and some zucchini beignets later, we headed back to the van, knowing full well we’d be going back to that place – Ho Tempo restaurant – the next morning for… VEGAN PANCAKES!

This time we tried another parking spot, around 10 km away from Hossegor. It was the schools parking lot of a village, behind the church. As school had not started yet (and also it was Friday night), it ended up being no problem.

As planned earlier, we went to Ho Tempo in Hossegor first thing in the morning. Simone ordered a salty breakfast and I had the (3) vegan pancakes with dark chocolate. YES PLEASE. They were so good. You know what wasn’t so good? The terrace where we were sitting quickly got crowded with very conservative old customers, and there’s only so much racism one can bear in the morning (none, same as for the rest of the day). 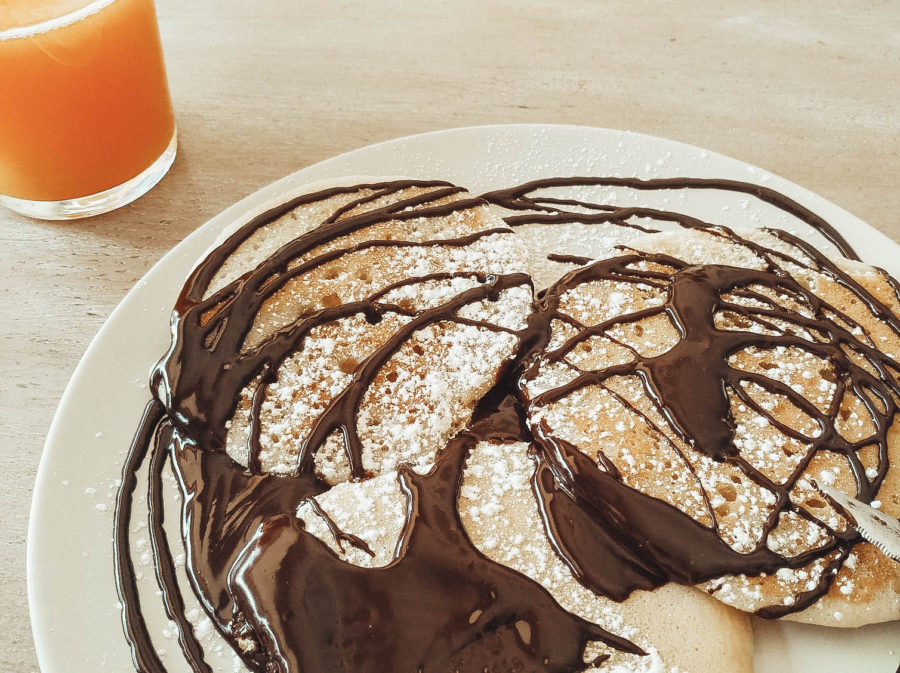 Anyhow, after leaving this delightful company, we went back on our hunt for a bodyboard. Back at the factory shops we finally found one and the accessories needed, before going to buy a few things to eat and heading to the beach. This time the parking was definitely more crowded, but we found a spot anyway, got beach ready, and then Simone went to catch some waves while I was extremely busy lounging on the beach. I forgot to mention I had gone on a “beach queen” shopping spree the night before and purchased a huge beach towel, beach mat and beach pillow, which ended up being genius buys. 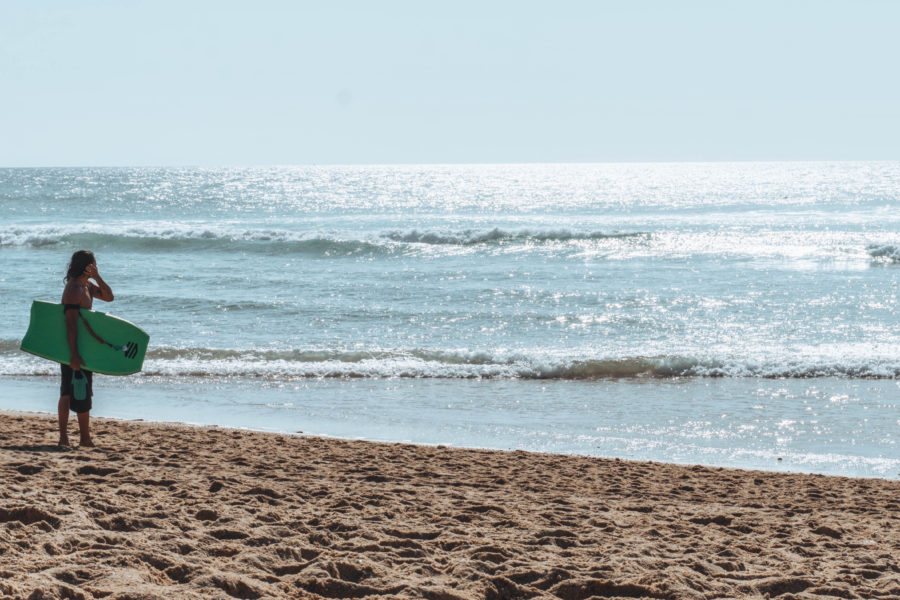 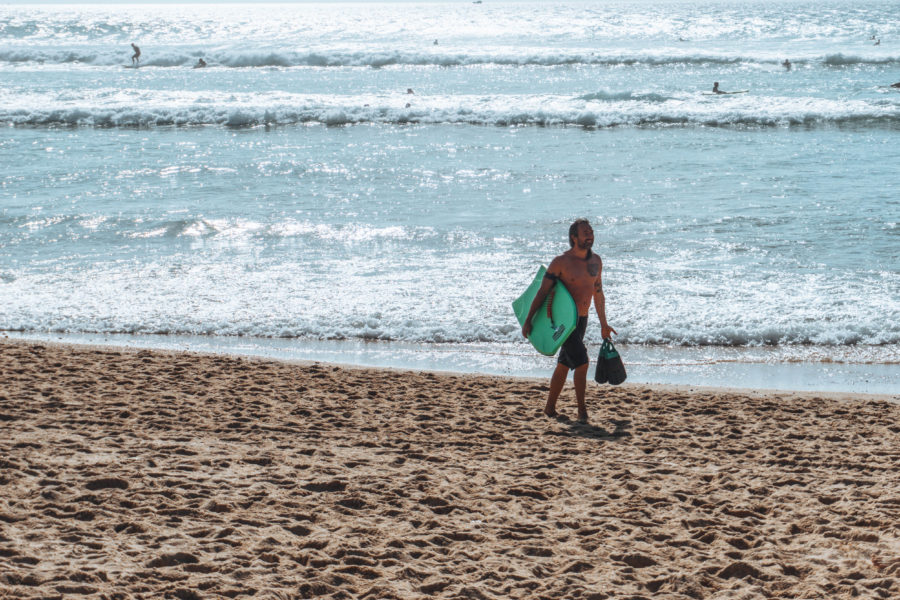 After getting our fill of waves and sun, we headed back to the van, had a quick dinner, and then drove back to the village parking lot of the night before.

Sunday – Last day in Hossegor and Seignosse, then Biarritz

What do you think happens on a Sunday morning when you’re sleeping behind a church? You’re awaken by the bells, and then by the mass. But we were so used to it after a year of living right by a church in Paris that it was really no problem at all for us to go back to sleep.

We had breakfast before heading back to Hossegor with the intent to find a rash guard for Simone. Let me tell you, the town was PACKED. It took us forever to find a parking spot – and rather far from the center – because of the market. It wasn’t too interesting for us, so we quickly went to Quicksilver, where we didn’t find the rash guard (we found it nowhere. End of season…) but got ourselves a waterproof bag. This ended up being another great buy as all of our precious electronics (MacBook, iPad, phones, chargers etc) fit in and are therefore protected from sand and water when we’re at the beach.

We drove to the beach, where the parking lot was absolutely totally full. We went a bit back to buy a few stuff (mainly water) and found a vegetarian restaurant called Happy Belly with vegan options. We sat and I ate a delicious bowl of Warung (rice, tofu, chickpeas and green peas, a tiny bit spicy). 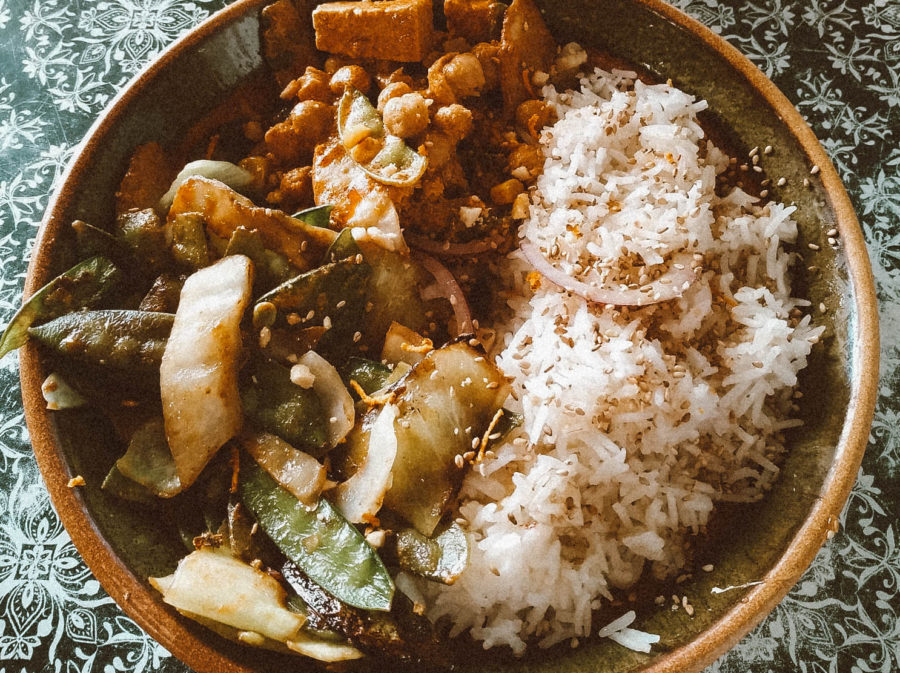 I kid you not when I tell you we were so desperate for a parking spot we:
-waited forever in the sun and for nothing (I was dying vampire-style)
-went to ANOTHER beach where we couldn’t even get into the parking lot because of the height of the van
-went back to Les Bourdaines and waited again until I practically lost 2kg of sweat
-ended up parking in a bit of a curve (but it didn’t pose any problem so yay!) 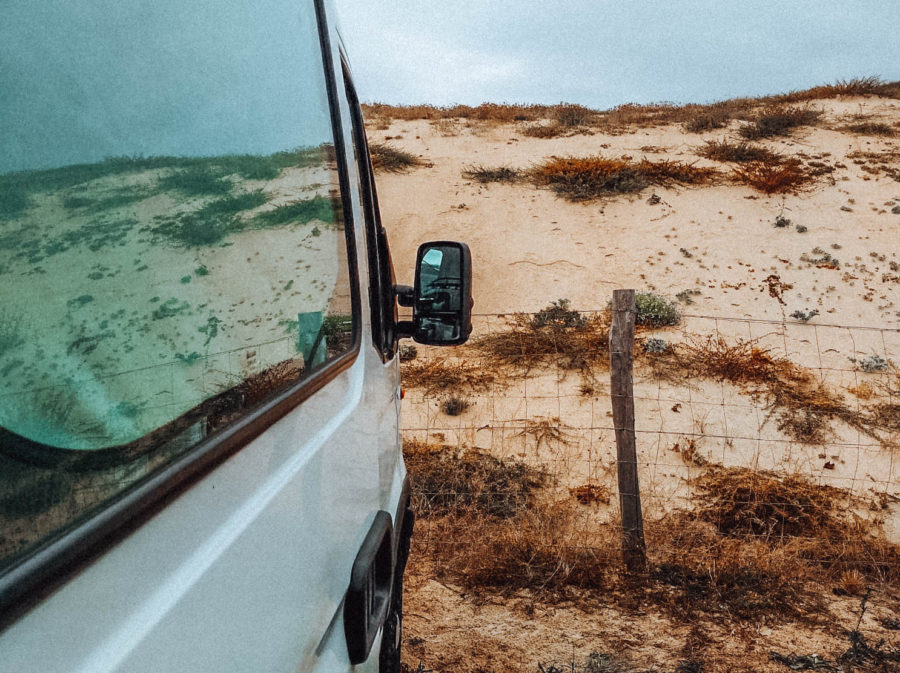 Once again I baked with the help of the sunbrella (it’s a thing) and amazing sunscreen, while Simone went to have some serious fun in the waves. At some point, people got agitated: they had spotted a bunch of dolphins playing a bit further in the ocean. I honestly only saw some moving dots but still, worth mentioning. 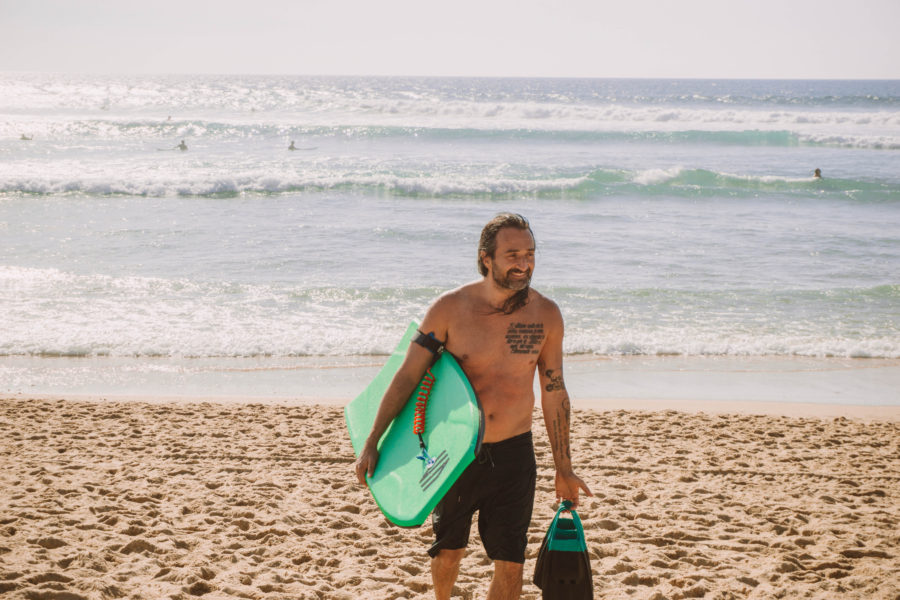 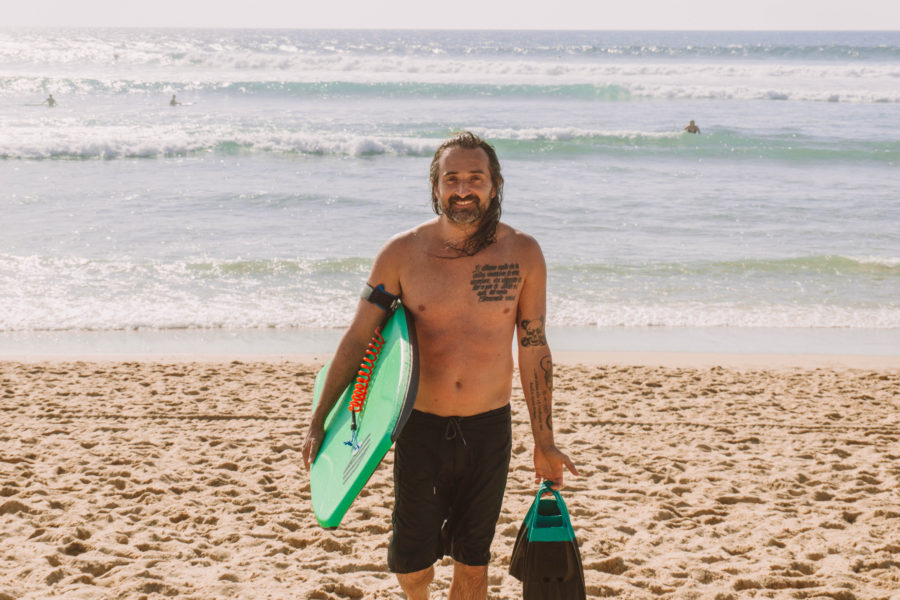 Once we started to be (momentarily, make no mistake) be done with the beach, we headed back to the van where we cleaned ourselves (oh the glorious homemade shower) and sadly said goodbye to Hossegor and Seignosse. 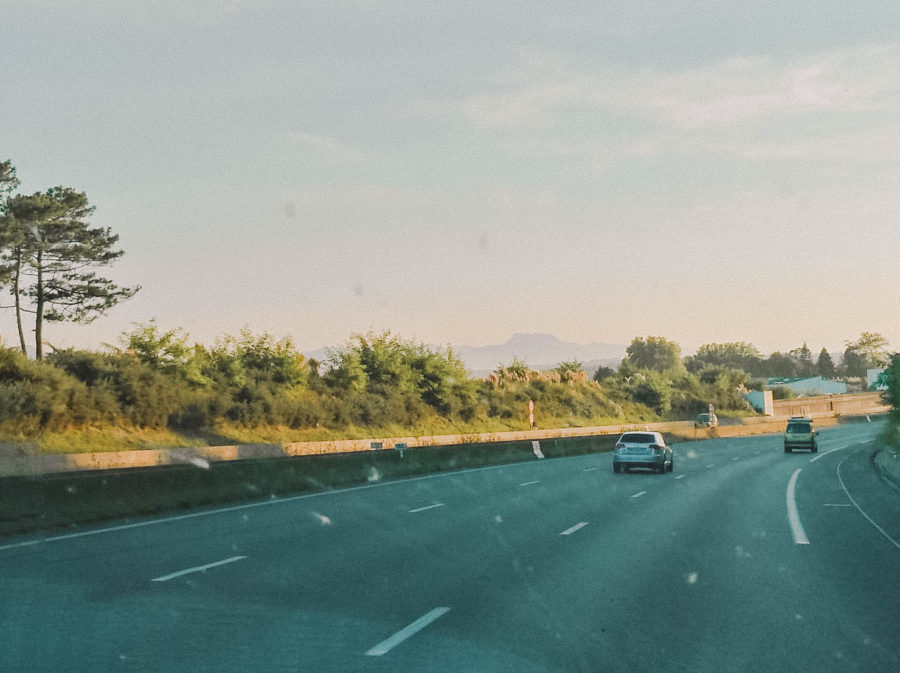 Back on the road, we hit a bit of traffic but nothing life altering on our way to Biarritz. We were super lucky to find a spot in a free parking lot in the city, only 10min walk away from the city center. 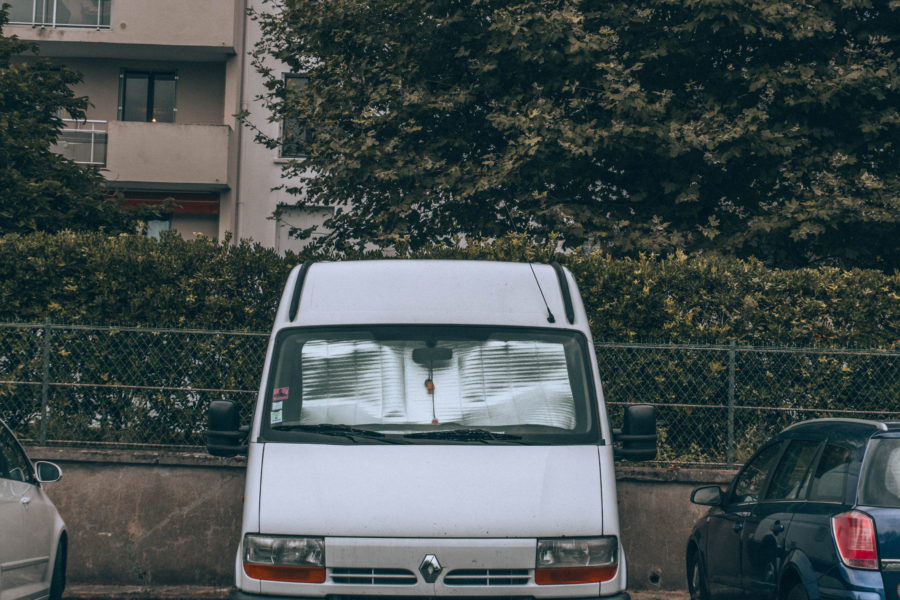 Starving as always, we left the van (from where it wouldn’t move for the next week and a half!) to look for a place to eat. At some point I recognized where we were, which was 30sec from the beautiful Grand Plage, the beach in the middle of the city center, in front of the casino. I had a surge of excitement and happiness at that, back to more than ten years ago when I went to Biarritz for vacations and took on surf lessons. Simone, who was NOT happy to be back in a real city after the beach life in Hossegor, was taken by the beach too, my mission was accomplished. 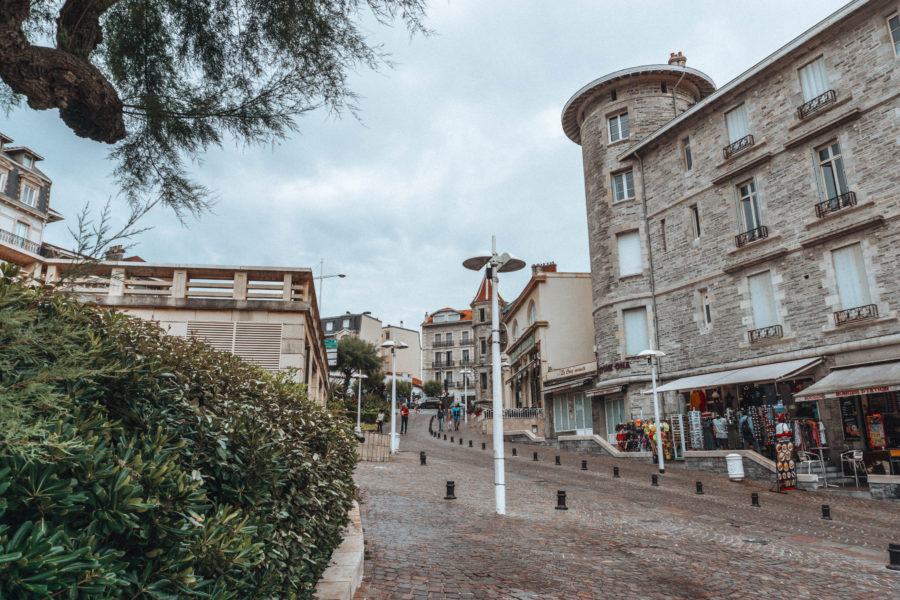 We sat at one of the restaurants that were still serving where I got a vegan pizza I ate from start to finish, at the demise of my lovely husband who always hopes to cash in on what I can’t eat anymore. 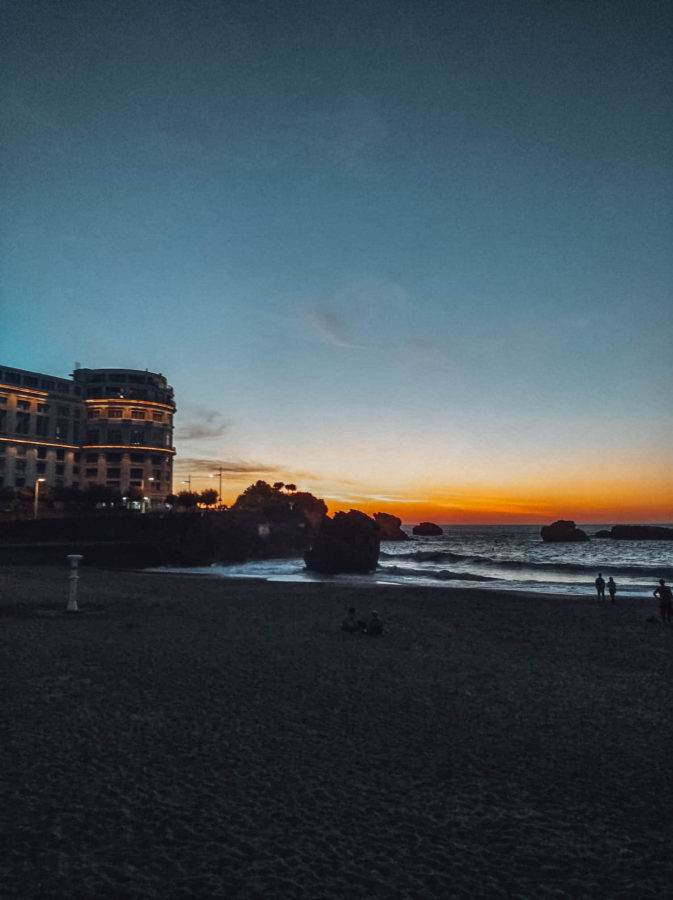 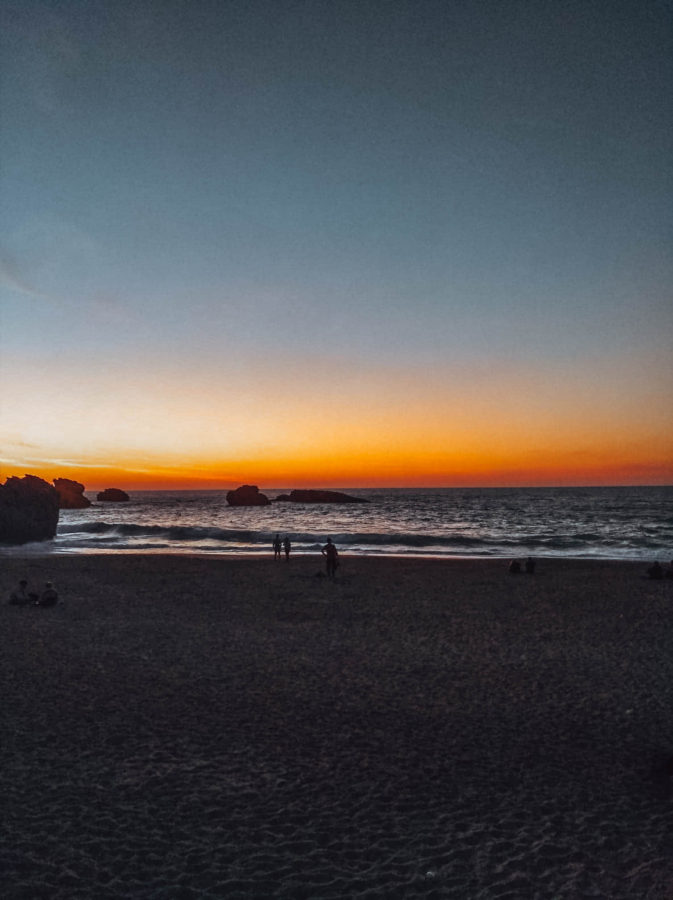 After that it was back in the van to sleep!

Tempted to go on a camper van trip around France and explore the West Coast? If you don’t want to buy a camper or an RV, you can always rent one! Check prices and availabilities on World Wide Campers!

Read what we’ve been up to in our Van Life Weekly #1 in Brittany, #2 in Auvergne, and #3 in Bordeaux, Cap Ferret and Agen 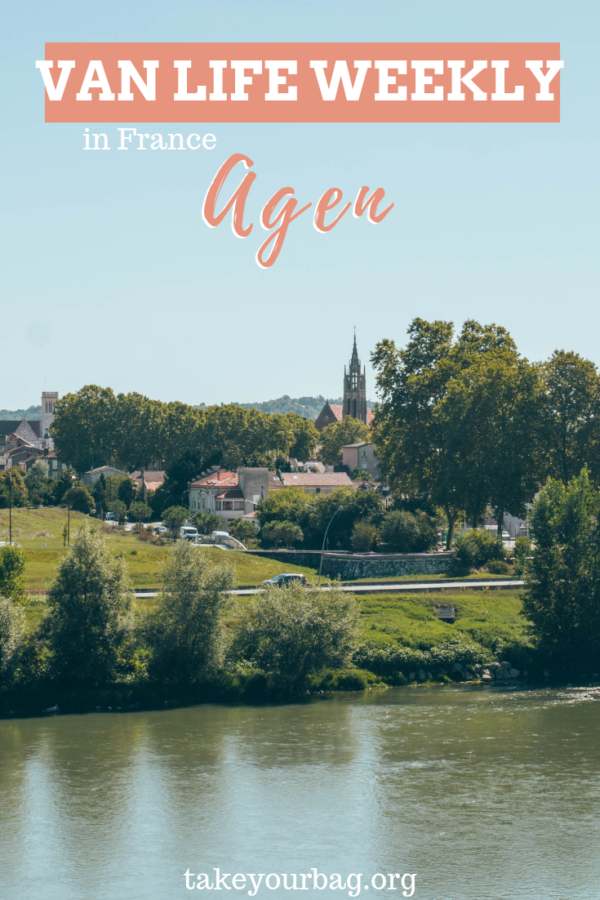 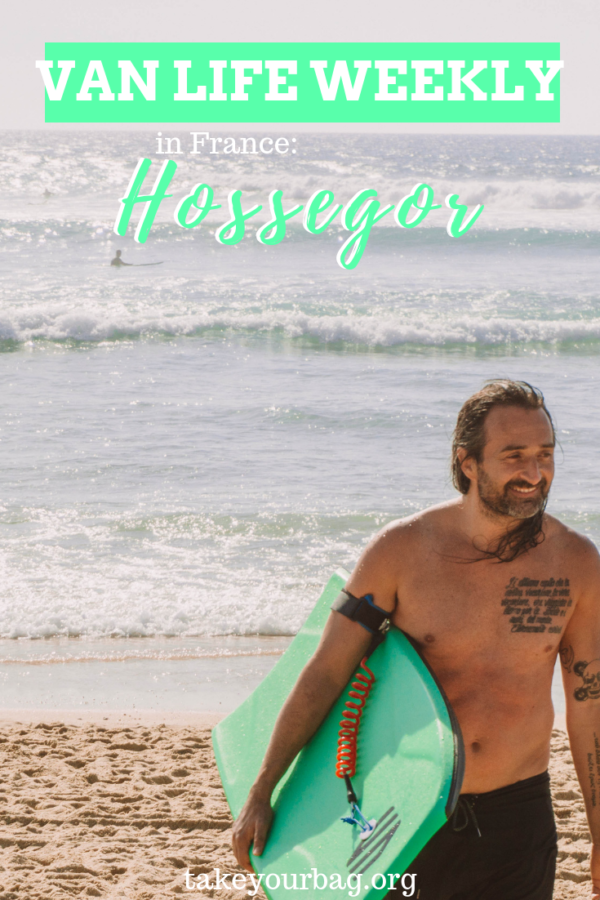