With Van Life Weekly we keep you update on everything we’re doing on a daily basis while traveling in our camper van around Europe. However it didn’t start with the beginning of our trip around France and Europe in our converted van, since we started in Paris on July 2nd (and since then been to Belgium, Rouen, Lille, on an epic road trip in Brittany and a week with family in Auvergne).
This week we left Auvergne to go to Bordeaux and spent a beautiful day at the beach in Lège Cap-Ferret, before going to see relatives in a town close to Agen… 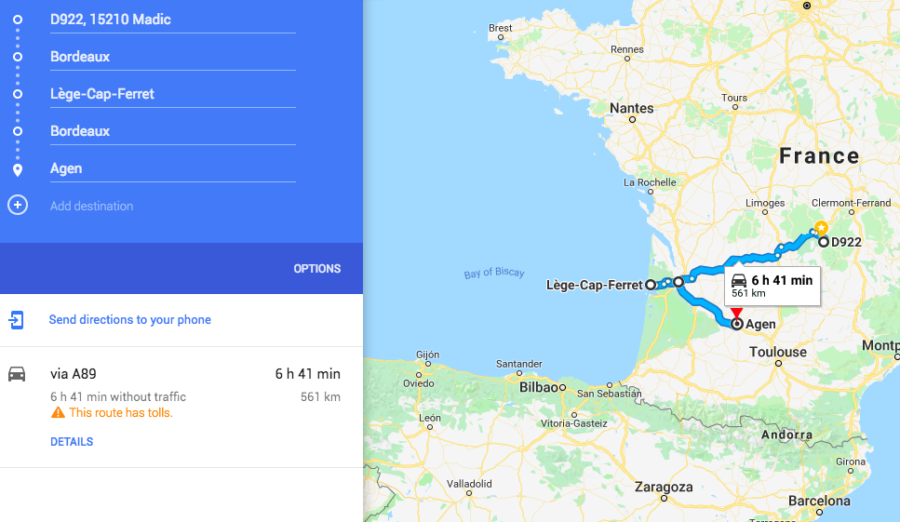 We left Auvergne and my relatives around midday to go to Bordeaux. While we were on the road, a childhood friend living in the suburb who I had texted called me back and said we were welcome to diner and a nice bed for the night. Who are we to say no to seeing friends and being comfortable?! We stopped by a mall to run a few more errands and joined him and his lovely wife for a great evening.

If you’re interested in going to Bordeaux by train and have a tight budget, we can recommend using Ouigo. The prices start at 10€!

They both have to wake up at DAWN to go to work, so by 7:30 we were out and on the way to a parking close to the city, where we (I) napped a bit more before starting our day. We were staying in Talence, one of the university cities very close to Bordeaux, so from there the city center was only a bus and/or a tram away.

Once again, the heat wave didn’t seem to be receding and it made our exploration of the city tedious… Therefore we took shelter at the movie theatre to watch Ant Man, and had a great time!

We went back to the van with the intention to drive to the surf city of Lacanau, on the coast. Simone took a few minutes to relax before putting on the GPS (google maps) and sitting behind the wheel to be on our way. Almost an hour later, we were circulating in the tiny and crowded (but not really on our side, which was a relief) roads of Lége-Cap Ferret, another coastal city – rather famous for the French. It started to seem a bit weird that we would bury ourselves in Cap Ferret to reach our destination, and before I could realize that Lacanau was supposed to be wayyyy up North, I had that feeling. I checked the destination on Google Maps. It wasn’t Lacanau. It was Le Canon. Which is a village/neighborhood of Lège-Cap Ferret. And here you have it: classic case of linguistic misinterpretation. To Simone, who was now furious with the French language, Lacanau and Le Canon sound practically exactly the same. Never mind the mistake, we were on a coastal city with beaches, it was late, we found one of the only two places where RVs and assimilated (us) could park (the cimetery) and settled for the night.

We didn’t wake up too late, and finally found a beach umbrella to cover my sensitive (white as a sheet) skin! The beach we had first picked was nowhere near how beautiful it had been depicted, it was full of boats, and the tide was very low. So we walked a while on the « beach » to finally find a more welcoming place. A place with houses on the beach, the kind of place where I would want to live. I lied down on my towel under my beach umbrella, while Simone was going to swim among the boats and sea weeds, and exploring the surroundings. When we started getting hungry we packed everything and went a bit further, where Simone had spotted a restaurant. I wasn’t starving – mostly because of the heat – and was happy to eat the only seemingly vegan meal on the menu (artichokes) while Simone ate four times what I did. Classical. But I did get a lemon sorbet, and I think it might be my new addiction! 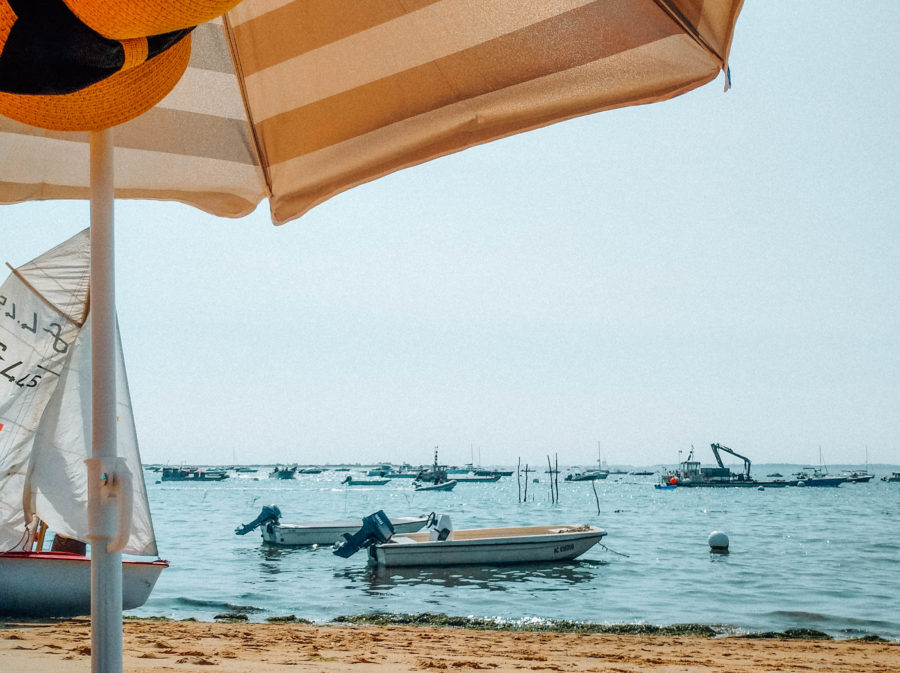 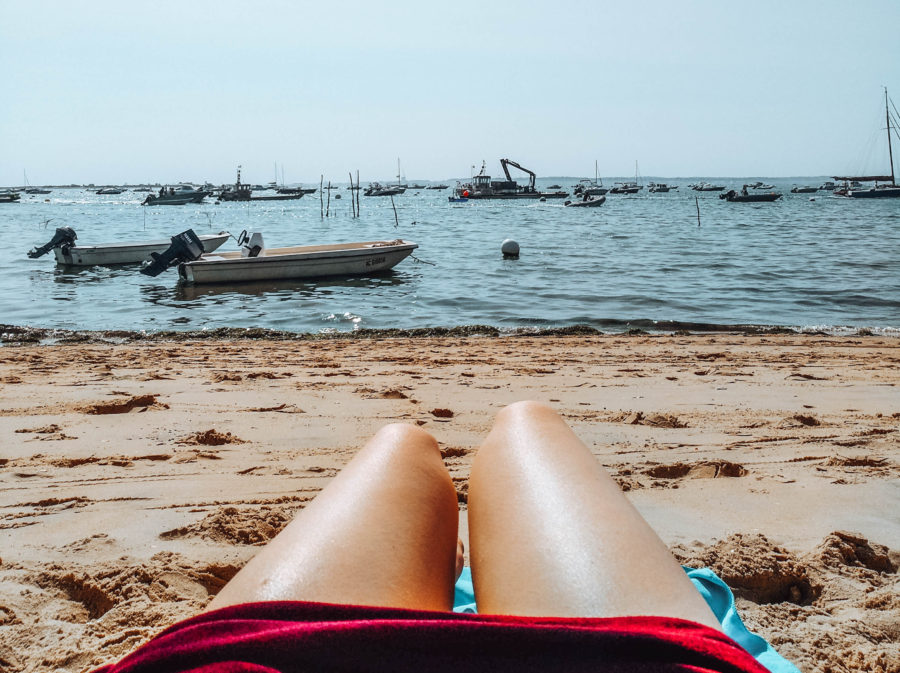 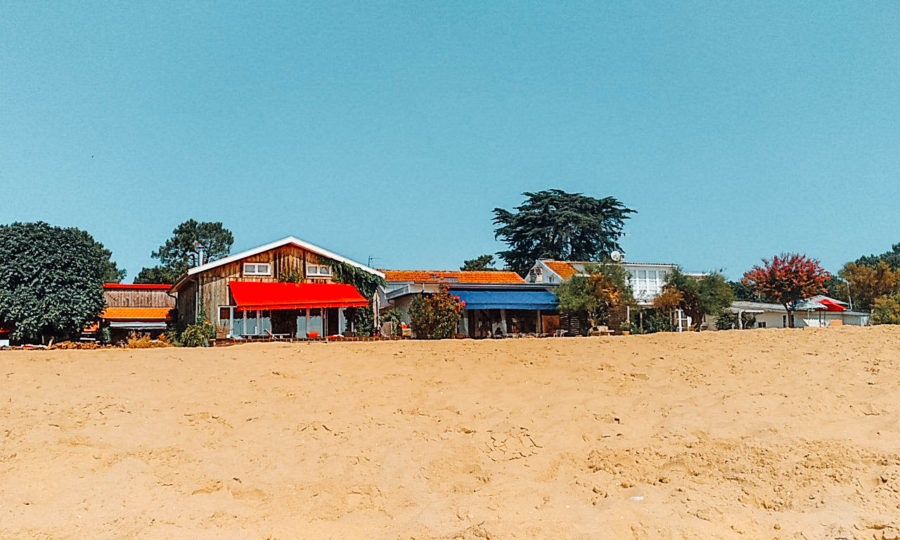 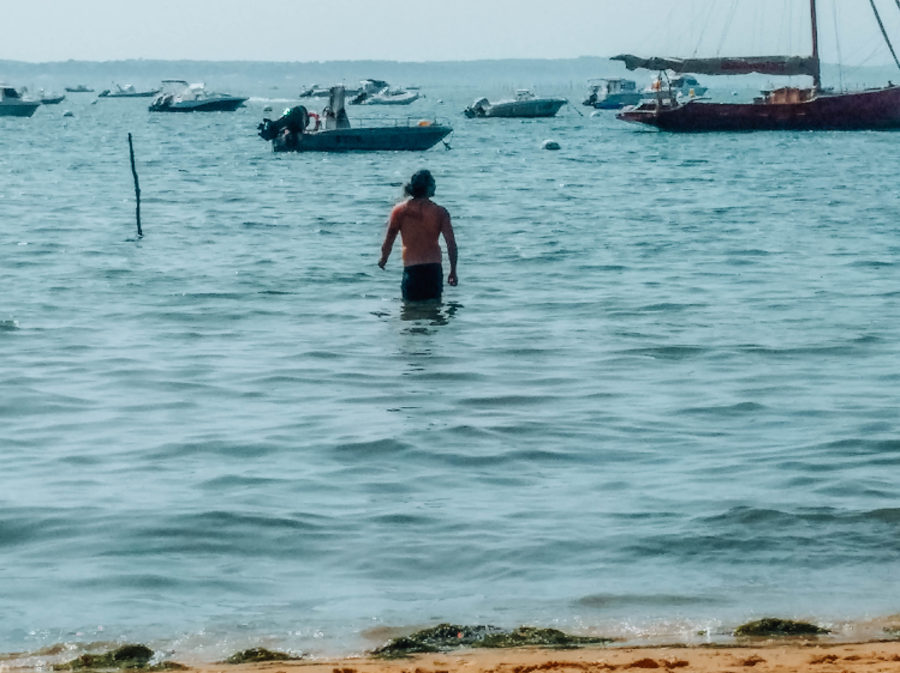 After that we went to the closest beach, practically by the restaurant. It was more packed than earlier, and the tide wasn’t as low. So I put on my rash guard (didn’t feel like emptying half a bottle of sunscreen on my back) and went to have fun in the water with Simone, before resuming my nap on the sand. Before leaving the beach, in the evening, Simone went to buy a few stuff to eat, including a rather scandalously cheap plate of oysters for himself, that he ended up sharing with strangers! We went back to the van then to our cemetery for the night.

Thursday – Back to Bordeaux

We had a couple things to do in Bordeaux and only for that reason did we go back, as honestly the sun didn’t make us want to visit any city at all. But we did take advantage of being there to go to the swimming-pool so we could swim and I could wash my hair. Then we found a Starbucks to recharge our phones, and a Japanese restaurant so I could satisfy my need of avocado maki!

Every time we slept on the van in Bordeaux, we did it in the same parking lot in Talence. It was not particularly pleasant, but fine. However that night we had a big fright! Around 4am Simone got up to pee and barely woke me up. He came back to bed, until practically giving me a heart attack when he shot back up from the bed, crashed on the separation between back and front, and started to shout at the door. A guy on a bicycle was there, who had probably tried to open the door, and was now asking directions to the MacDonald’s. Simone answered and the guy was on his way, but this was so surreal, we spent at least an hour scanning the surroundings, trying to see if we were going to be robbed, if we should move or not. There was no sign of other people nor was there any of the guy on his bicycle, and as Simone was tired (it was the middle of the night) and we wouldn’t know where to park anyway, we decided to stay but only half slept until morning… 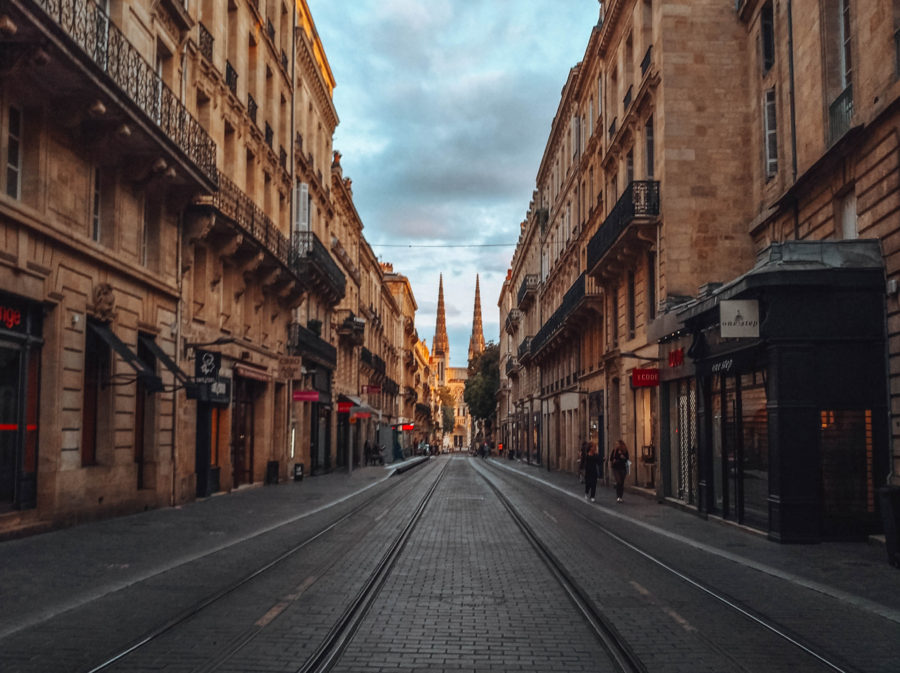 Then we found a Biocoop where we bought organic veggies and a couple of seitan products Simone cooked right away for us to get some proteins. I really miss our daily protein shakes…. That day was still hot but grey, so we took our time and went back to the movie theatre to watch the excellent Blackklansman. At night we went to the famous fast food chain just to charge up our electronics (ok, Simone ate too) before sleeping like babies even with the thought of the bicycle guy coming back. Which didn’t happen.

On Saturday we went back on the road to go near Agen, where my godmother, her husband and daughter live. As you might have understood, this trip around France was a great occasion to see the family I don’t see regularly. We were welcomed with a table ready for lunch, went to go shopping in the afternoon, and went to the local music festival « Pruneau show » (Agen is famous for its prunes).

If you’re interested in going to Agen by train and have a tight budget, the OUIGO line will open on July 6th!

On Sunday, our hosts had a family lunch party and came back late in the afternoon, so we had the day to ourselves to do not much and relax in the comfort of a fresh home compared to the never ending heat outside. Everybody was pretty tired after a day eating with family, so we took it easy and had a nice evening home.

Tempted to go on a camper van trip around France and discover amazing places? If you don’t want to buy a camper or an RV, you can always rent one! Check prices and availabilities on World Wide Campers ! 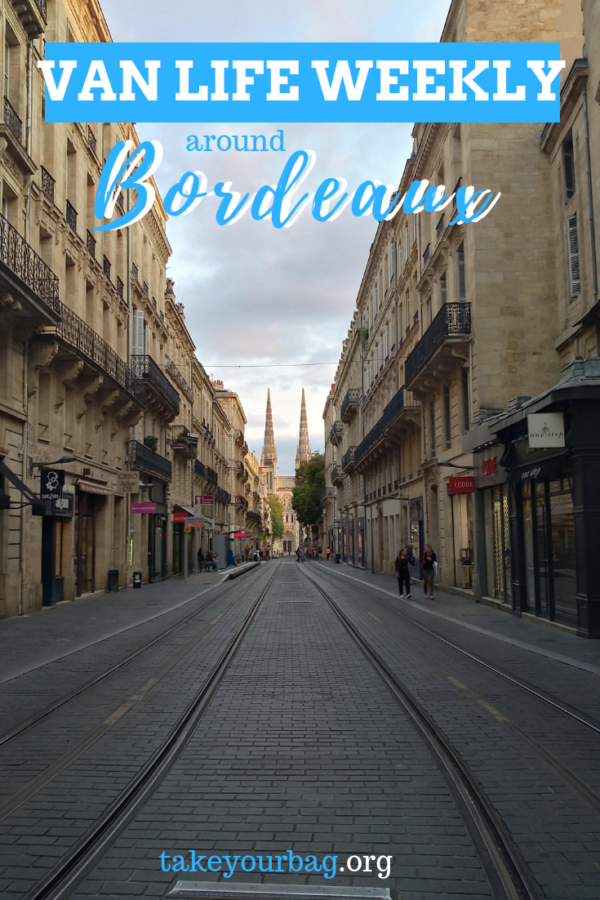 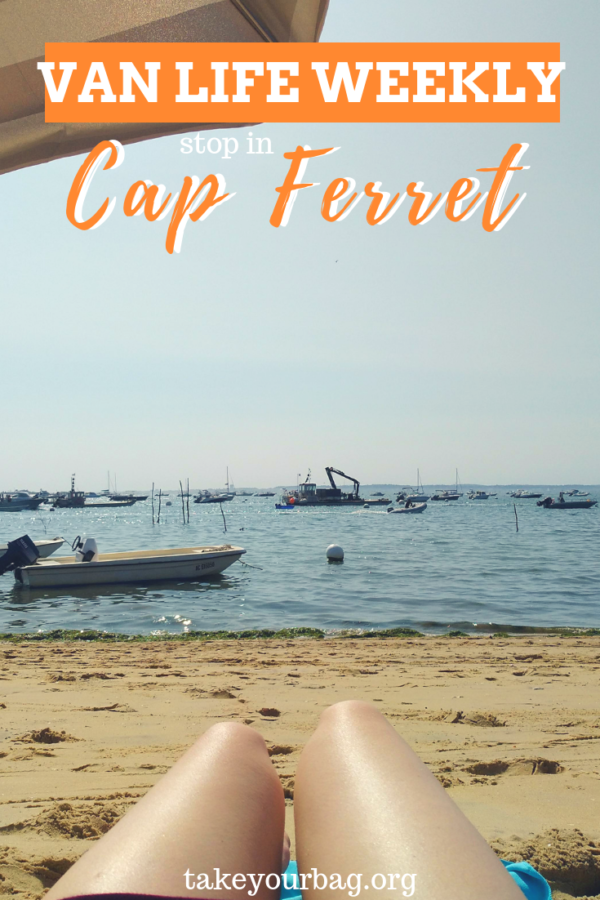