Van Life Weekly #12: From Rome to Florence and Grenoble

Van Life Weekly #12 – October 31st to November 4th: From Rome to Florence and all the way up to Grenoble

This week – the last one of our 2018 van trip around Europe – we went from Rome to Grenoble, stopping by Florence on the way. It was hard to decide to put a stop to this van trip, but we had to face the truth: we were exhausted and needed to find our nest until the birth of our new co-pilot. So we made up our minds, had a final trip to Firenze, and ended this trip in Grenoble.

As mentioned at the end of Van Life Weekly #11, we’ve skipped our time in Rome since we’ve been dealing with personal stuff and work, nothing very interesting for you guys.

On Wednesday we woke up in the hotel we had booked for our last night in Rome and had breakfast in the van. Then we were back on the road after a dozen days living in a house. It’s really paradoxical how we enjoy the comfort of a house, and miss our little van home at the same time. So we were definitely happy to be back on wheels!

We had lunch on the road in the back of the van, and Simone kindly let my pregnant ass take a big nap since it seemed being on the road again had exhausted me more than I thought it would!

Therefore it was night when we arrived at the camping in Florence, and we decided to book two nights in order to be able to visit the city the next day. If expensive, that camping was also pretty cool! We had a big space just for us with practically no neighbours, the toilets/showers were heated (it was FREEZING outside at night!), there was a great bar/restaurant and inexpensive shuttles to go to the center.

We used the electricity for work and Netflix and then it was time to sleep and get some energy for being tourists the next day. 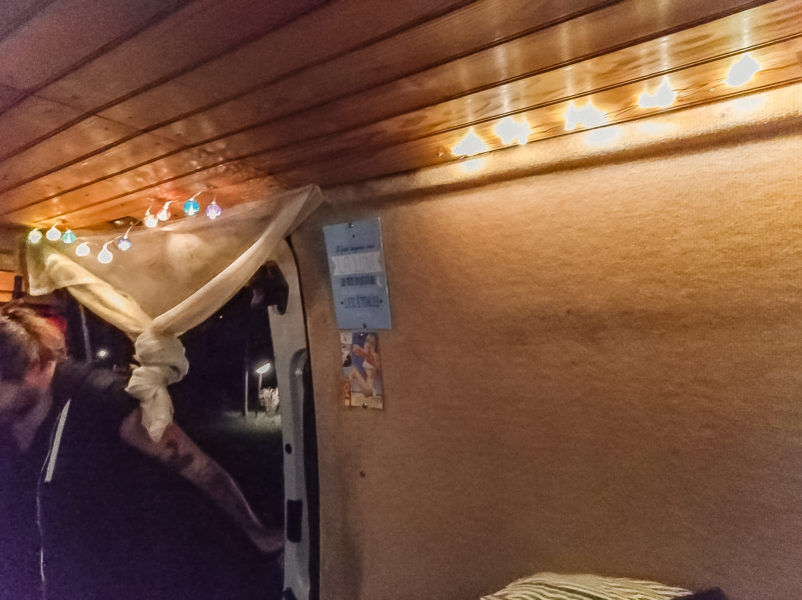 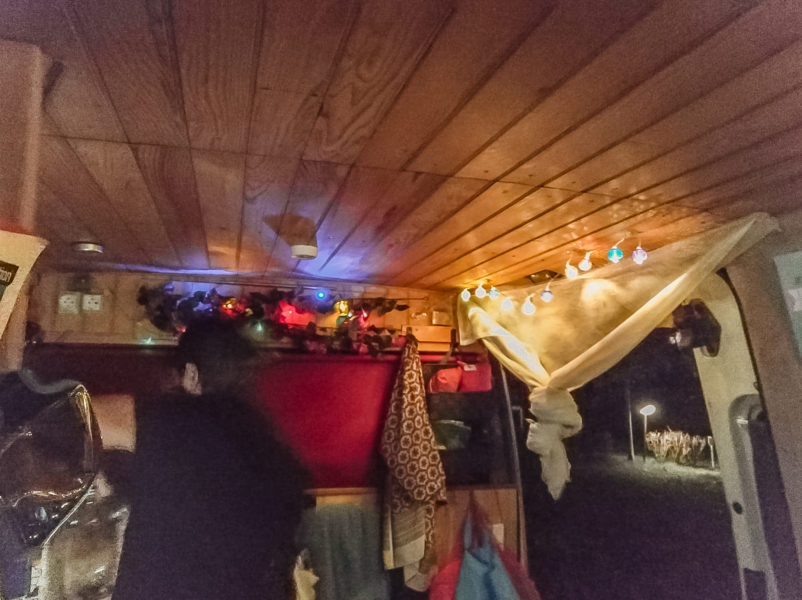 Thursday: A day in Florence

Of course when I woke up the next morning I was feeling like crap, because why not? Nevertheless, we had lunch in the van and took the 14h30 shuttle to the city center of Firenze. I really wish I was feeling better because Florence is high on my bucket list, but we had to make do like that. Since it was a holiday, the place was super crowded!! I didn’t feel good enough to commit to queuing and visiting a place, so we only admired from outside. I guess we’ll climb the 400+ stairs of the Duomo and visit the beautiful museums either when (if) I feel better later in the 2nd trimester, or with a toddler in tow!

But even from outside, and even with the worst pizza deal in the universe, Florence is indeed stunning, and we had a great time. 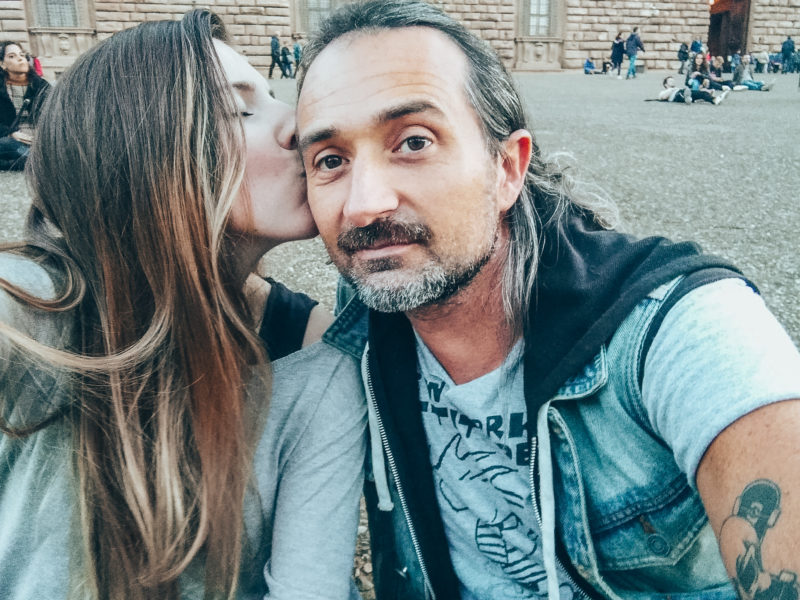 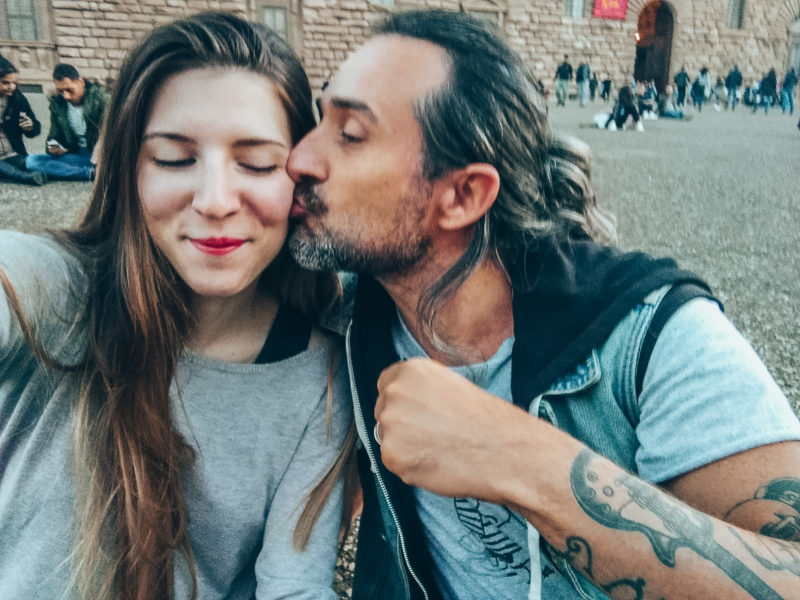 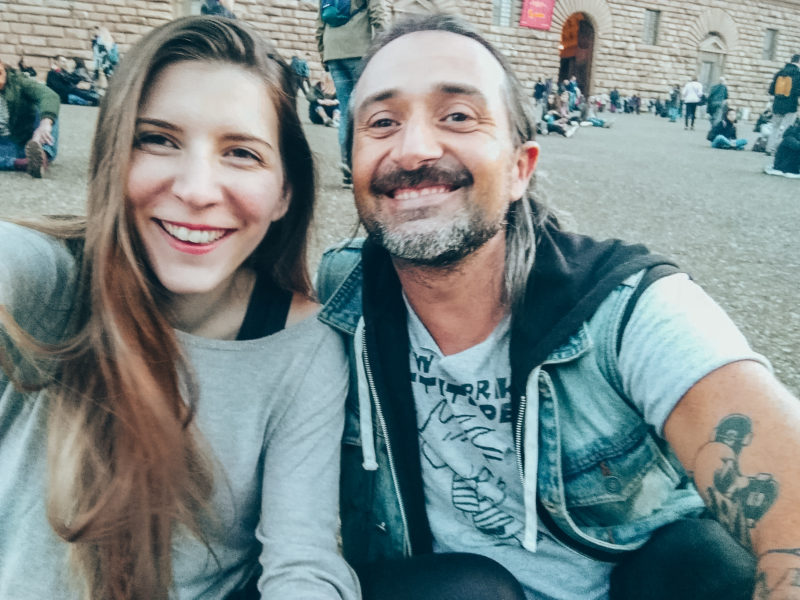 Until it got really too cold, so we started heading back to the shuttle stop. On the way, I spotted two bars that had been recommended on a blog post (forgot which blog!) as the bars where the locals go. So we stopped at one, Negroni, where Simone had a (wait for it) Negroni and me a custom non-alcoholic cocktail. We talked and talked, missing the 18h30 shuttle, but caught the 19h15 one (also: the last one). 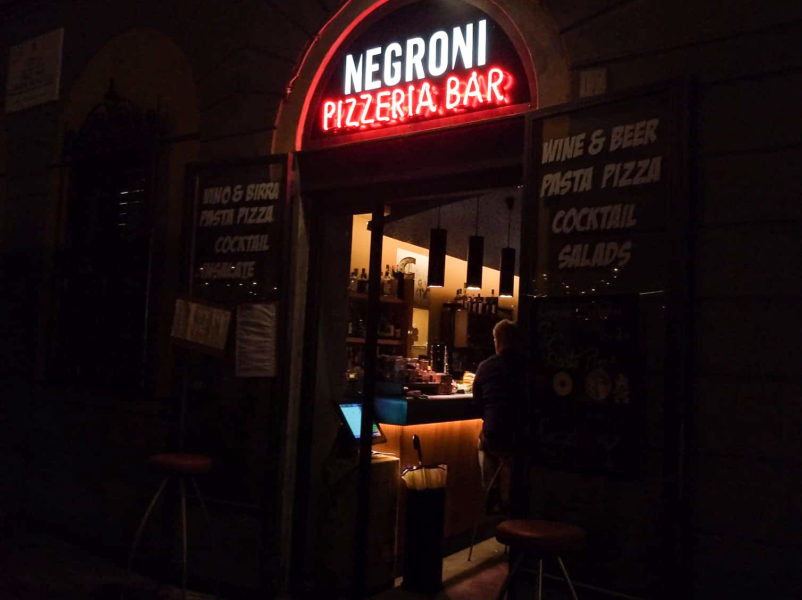 Back at the camping, we booked a table at the restaurant for a bit later because it was packed!! We waited in the very comfy armchairs at the bar until our table was ready, and then I had the best marinara pizza of my entire life. Not kidding.

An hour later we were back in the van for some work on my part, and some Netflix later.

Friday: From Florence to Parma

I totally forgot to mention, but a disastrous and killer wave of bad weather had been tormenting Italy for more than a week by now. Storms after storms had made rivers over flood, boats crash on ton marinas, people died… it was awful. By some miracle we were untouched and didn’t have any trouble on our way to anywhere. But it kept raining over and over, and particularly at night. Just thought I’d mention otherwise you’d think it was a beautiful summer over there. Nope. Terrible terrible weather.

It had rained all night again, but we didn’t feel too bad that morning and I even exercised for the first time (not counting arms workouts, which I’ve been doing sporadically) in months. Maybe to celebrate our 4 months in a van?

We left before checkout time, to reach a RV service area close to Parma.

It was not pretty, it kept raining and it was full of noisy RVs, but we had electricity and that’s all that mattered. Simone went to explore and actually reported that we were in the cutest little town, which included a maze (I’m not kidding). He also went to get us some pizza for dinner and that was the best deal EVER. For a full marinara (not a piece of) and a artichoke pizza, plus a bottle of water: 8€. And the pizza was delicious. How I’ll miss Italy…. 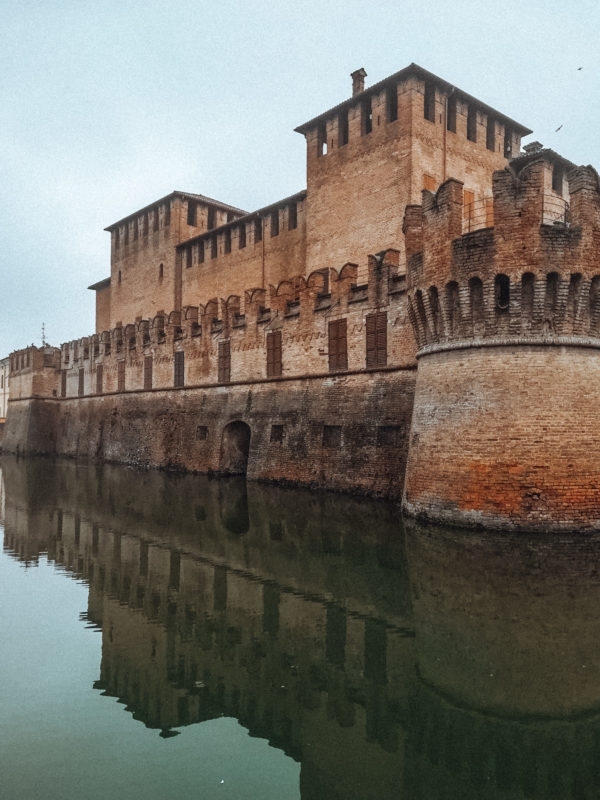 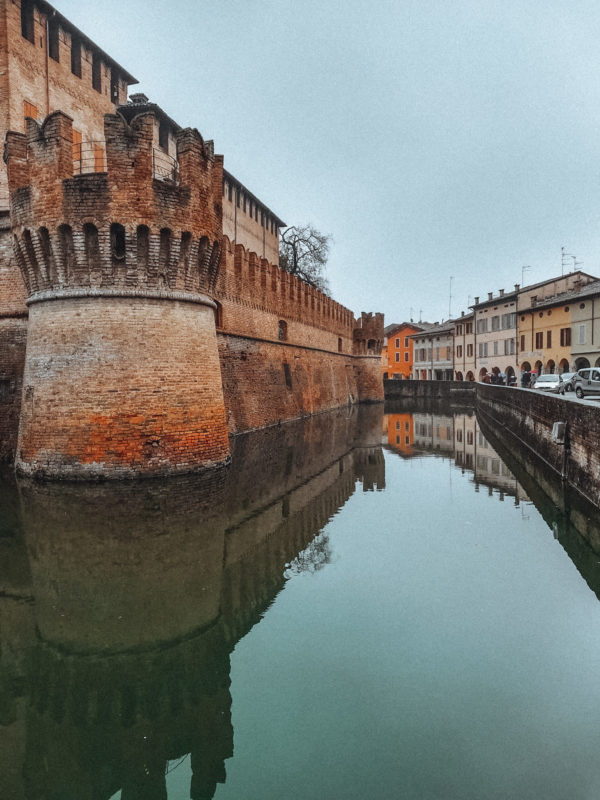 Saturday: From Parma to Turin

Simone woke up early and I late (surprise surprise) so he got us some breakfast and we left the cute little town. He got up so early he’d had the time to go make some pictures! 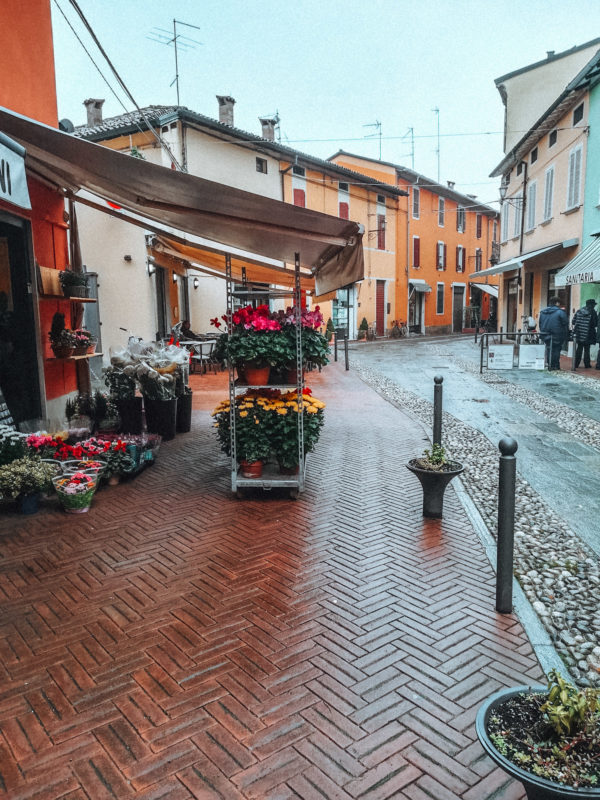 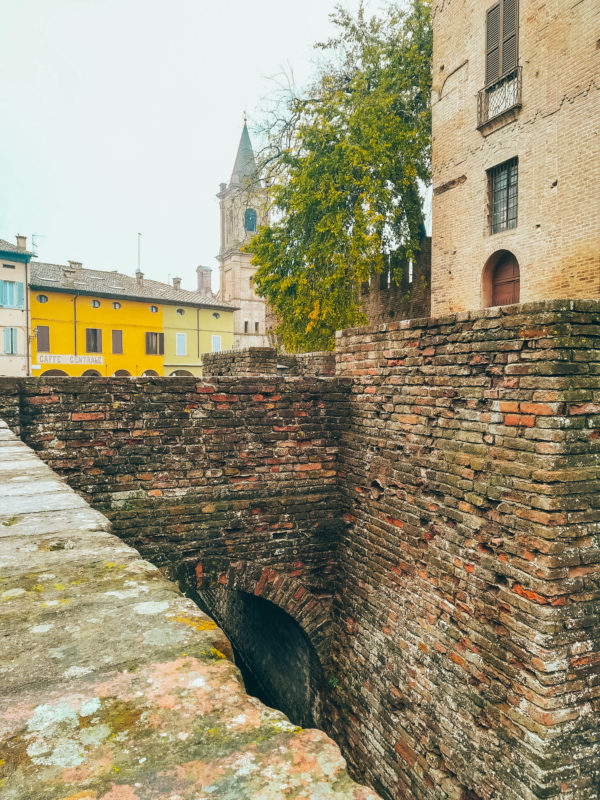 We were both starting to be pretty tired of being on the road every day (both physically and mentally), so arriving to the camping in Turin to find it full was not fun.
We had to talk about what to do to reach the conclusion of: let’s try this camping 25+km away. And on the road it was decided that if the camping was full, we’d stop at a motel and that was that. 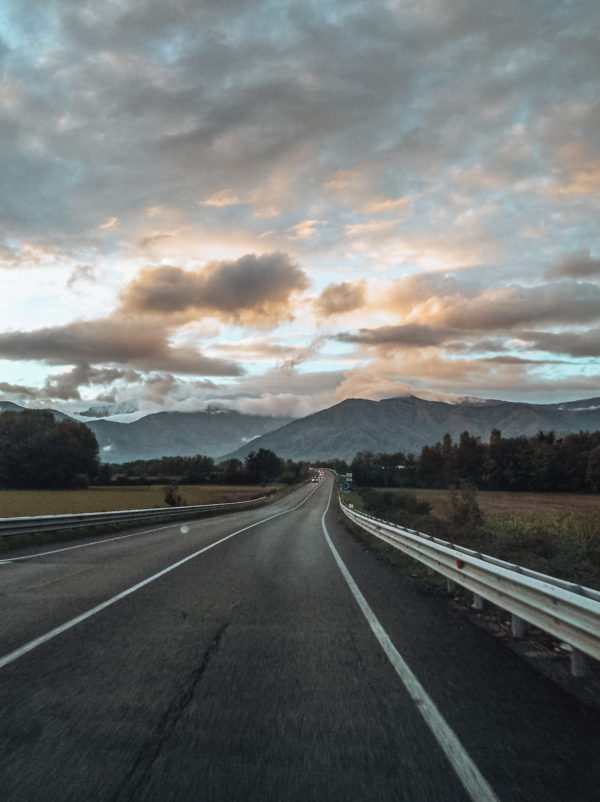 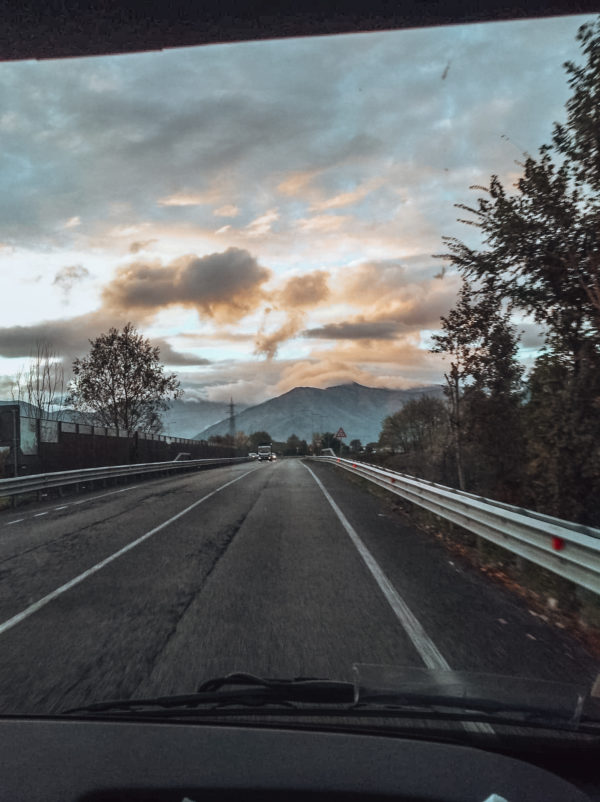 Fortunately, after a really pretty drive in the country, we reached the camping, which was not full. They had a sort of winter get together with some food, hot chocolate and mulled wine, so we braved the rain to go and mingle, before going back to the warmth of the van.
This camping pitch spots (where we parked) were really cute so we enjoyed it a lot.

Sunday: From Turin to Grenoble

We both woke up tired (despite sleeping well) and weary of the road. Since the camping was pretty cheap (especially compared to the 800€ for 2 weeks of appart’hotel in Grenoble that we had just booked…), we decided to spend another night there. Except they were closing, so nope!!

Back on the road, we were fortunate to have the most breathtaking landscapes accompanying us. It almost made the 59€ we payed solely for the Frejus tunnel worth it (almost). 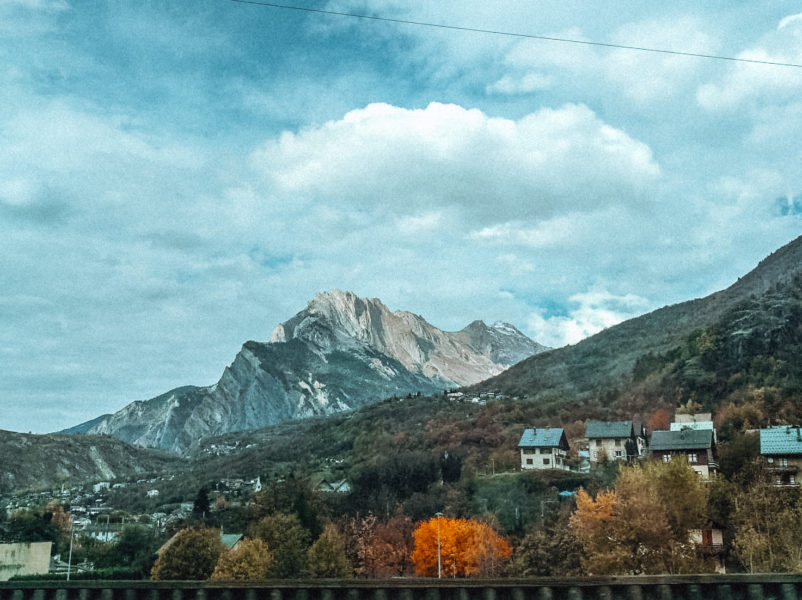 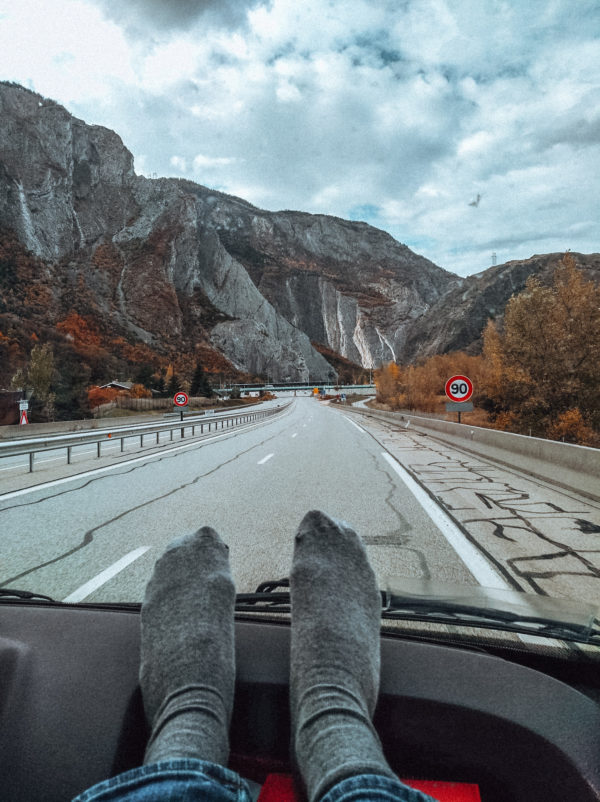 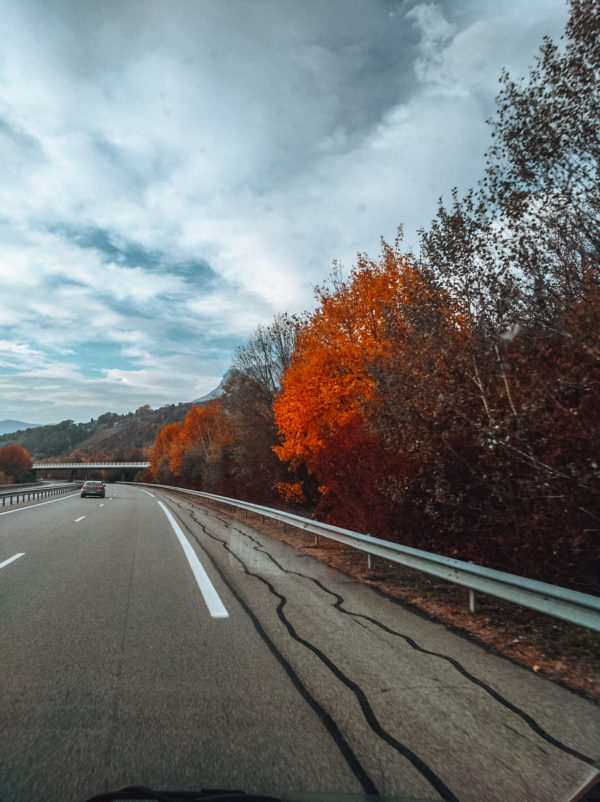 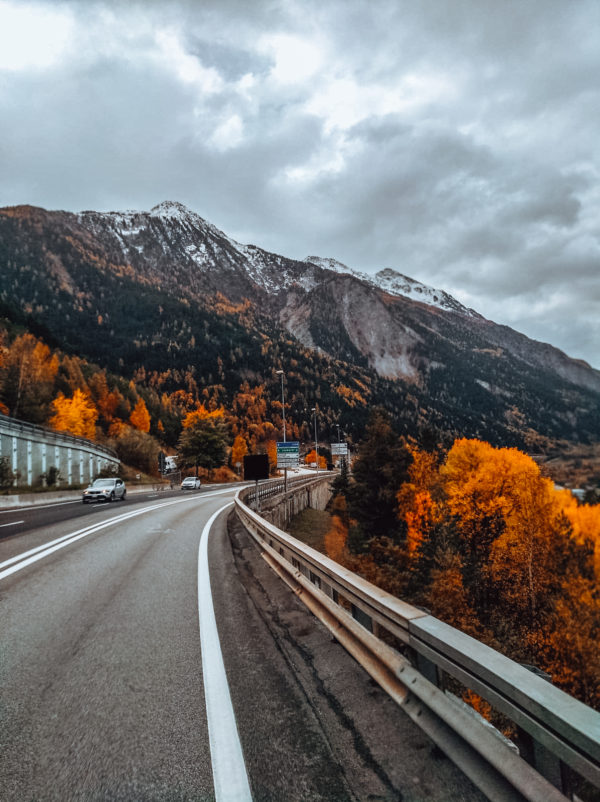 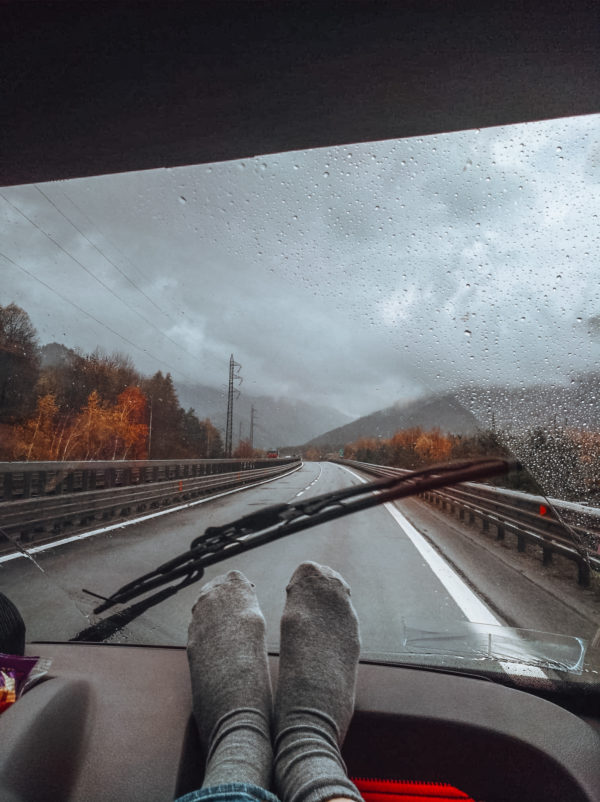 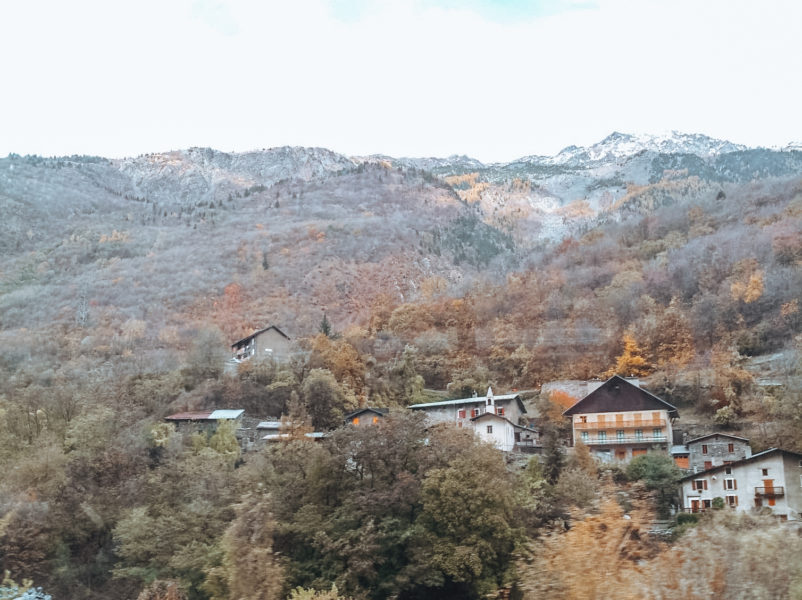 We decided to spend our last night in the van (so sad to write these words!) for a while in a camping close to Grenoble.

This is our last Vanlife Weekly for a while… and next time we’ll be three!

Tempted to go on a camper van trip around Europe and discover the beauty of Italy even in the cold and under the rain? If you don’t want to buy a camper or an RV, you can always rent one! Check prices and availabilities on World Wide Campers ! 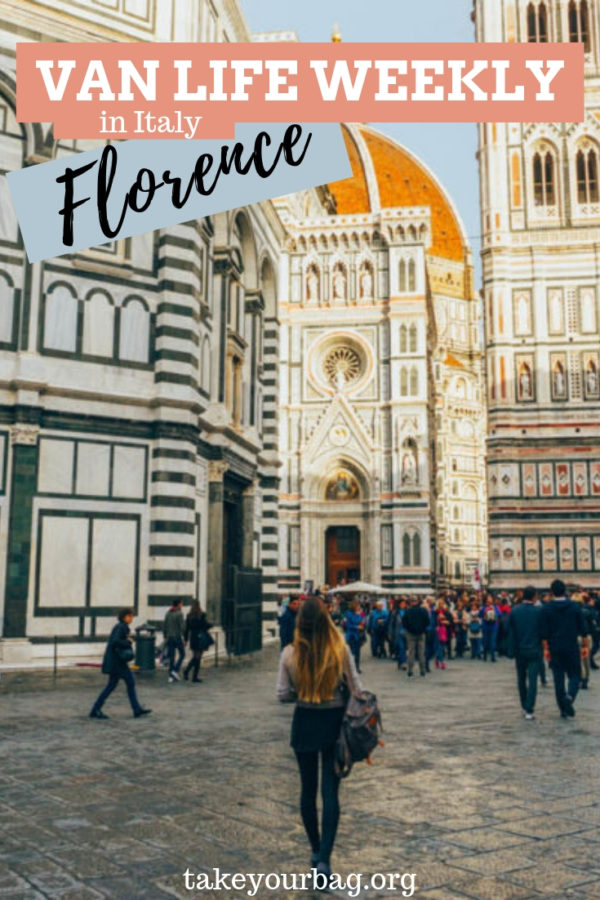