Van Life Weekly #10: From Narbonne in France to Tossa de Mar in Spain

This week we finally made it out of France and to Spain! We visited Narbonne before leaving, and had some scary moments on the road in the Pyrénées to go from France to Spain. But then the sky cleared up and we found ourselves in an idyllic place on a cliff above a beach in Tossa de Mar, Spain.

We woke up in the dump parking lot we stopped at close to Narbonne. The weather was awful and it was super cold!!

Once we shook the bad mood of that place and weather, we drove closer to the center of the city and briefly visited Narbonne. 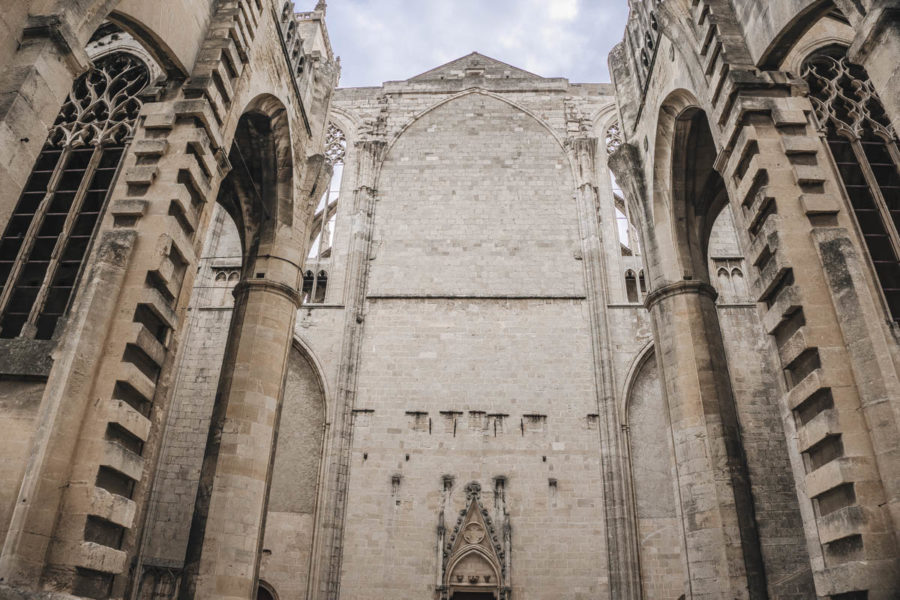 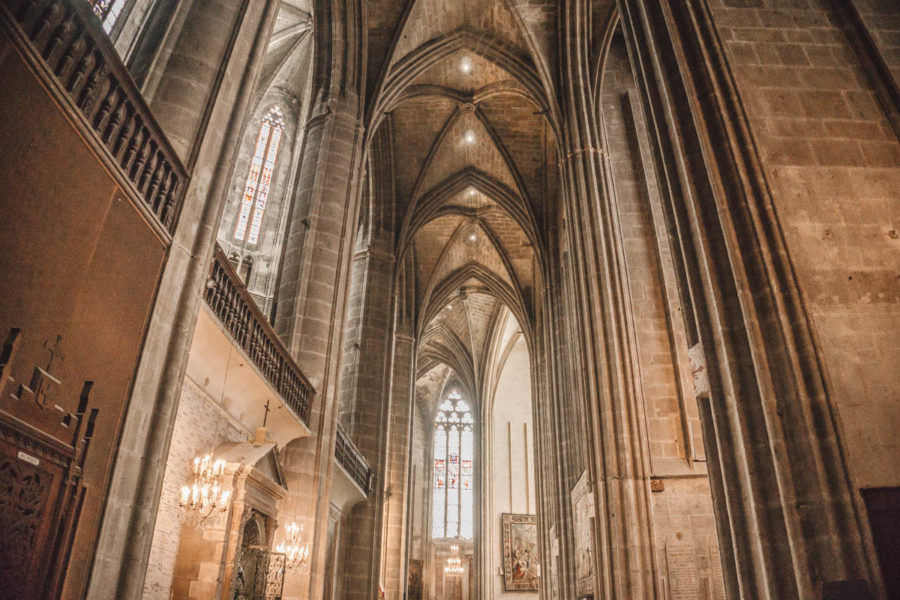 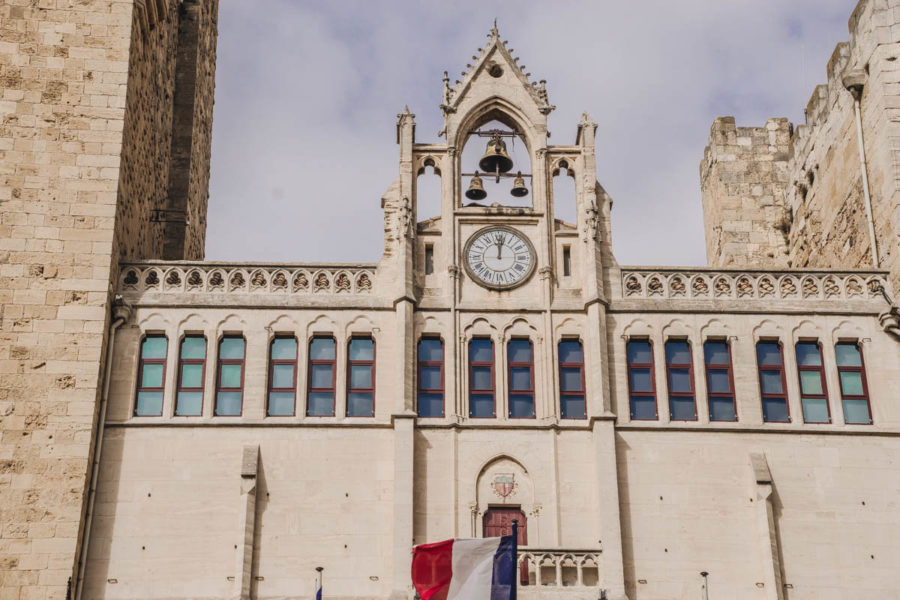 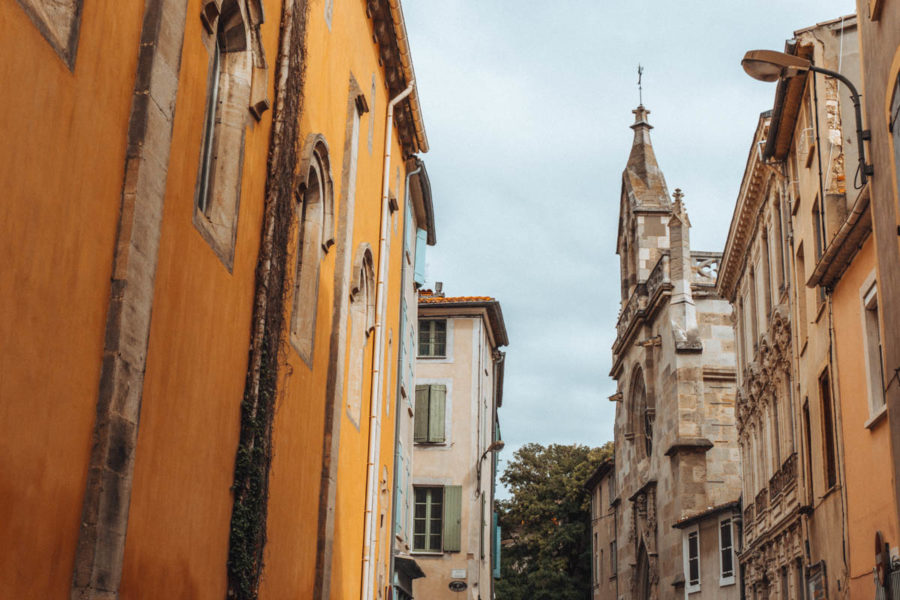 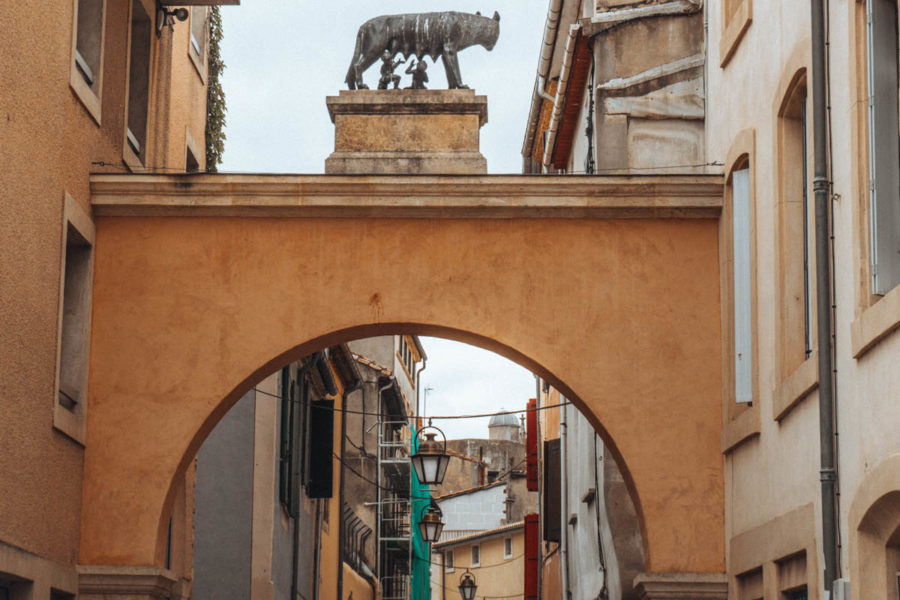 After our nice exploring walk, we went back to the van to have lunch, before going back on the road.

From Narbonne, we drove to a place close to Perpignan called Sainte Marie de la Mer, where there was a RV stop. We realized at that point that we didn’t have the right adaptator for the electrical plug to get electricity. Newbie mistake. Fortunately, the guy from the RV next to us was super nice and lent us one to keep until he would leave the next day.

The place wasn’t overly exciting (and it was FULL of flies), so I worked pretty much all afternoon/evening, and at night we watched the Netflix show Elite. It rained. all. night.

When we woke up, the weather was still pretty shitty, with intermittent rain… Simone got lost on his run to check out the nearby beach and then we had lunch in the van while doing the laundry at the laundromat.

Once we were done, we went back on the road, to Spain this time! With this weather, the road in the Pyrénées was super freaky and we both had a few times when we stopped breathing… It was raining badly, the drivers were crazy, and the road was steep, which meant that our old van was going to turtle speed… It didn’t get really better after that, except for the fact that the tolls and the gas were really cheap, but we still had to go through a freaky 14km long lace road. Lots. of. fun.

Of course when we arrived in Tossa de Mar it was too late to go to the camping, the reception would be closed. So we found a parking lot and spent the rainy night in there, with the company of lovely lightning strikes. While we were checking plans for the next days and weeks, we started to be really concerned about van safety in Spain. Everywhere on Park4night and Facebook people were mentioning break-ins, and that’s something we really wanted to avoid, so we wondered what we would do…

Once again, it rained. all. night.

On Wednesday morning, we got ready and passed by a nearby garage where we made an appointment for the next day to do the oil change etc.

We then drove on a (finally!) beautiful road to the camping Simone had found. The view from the campers’ spot was amazing!!
Since it had been raining all morning the pool was closed, but Simone went to explore and have a look at the sea while I worked most of the afternoon. 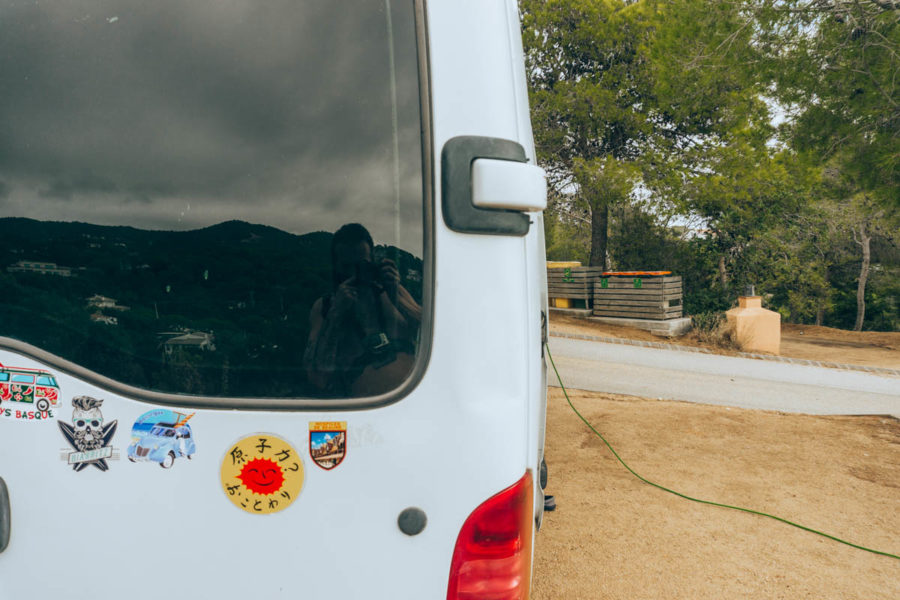 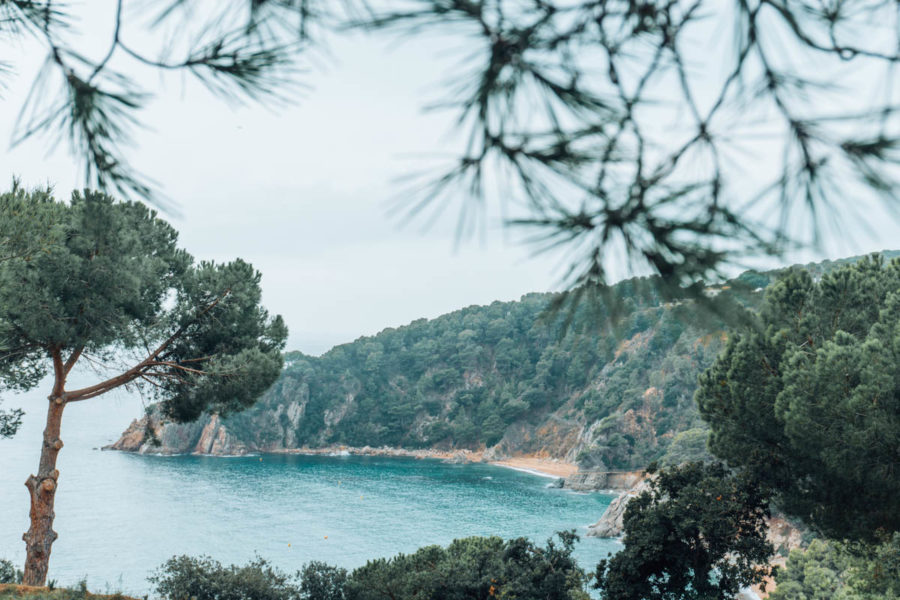 We also had the luxury of a hot shower and space and hot water for Simone to wash the dishes. Which totally made him want to make super good dishes to eat, which was awesome.
We also published a post written by Simone: Van life for beginners (like us). Check it out!

This view does not get old in the morning! I’m definitely going to miss it.
I worked a bit in the morning while Simone went to the pool, we had a good lunch and took our time to get ready and drive the van to its garage appointment at 3pm. 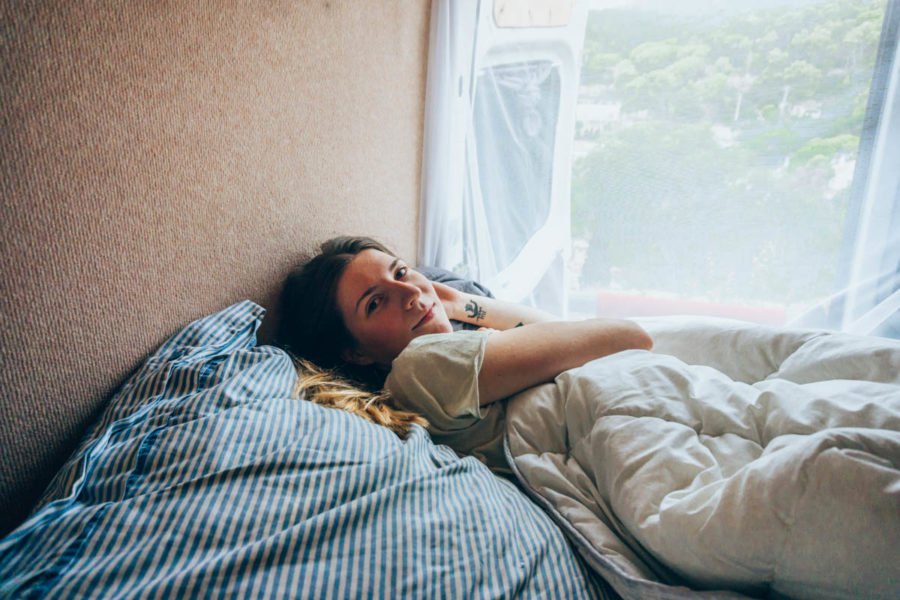 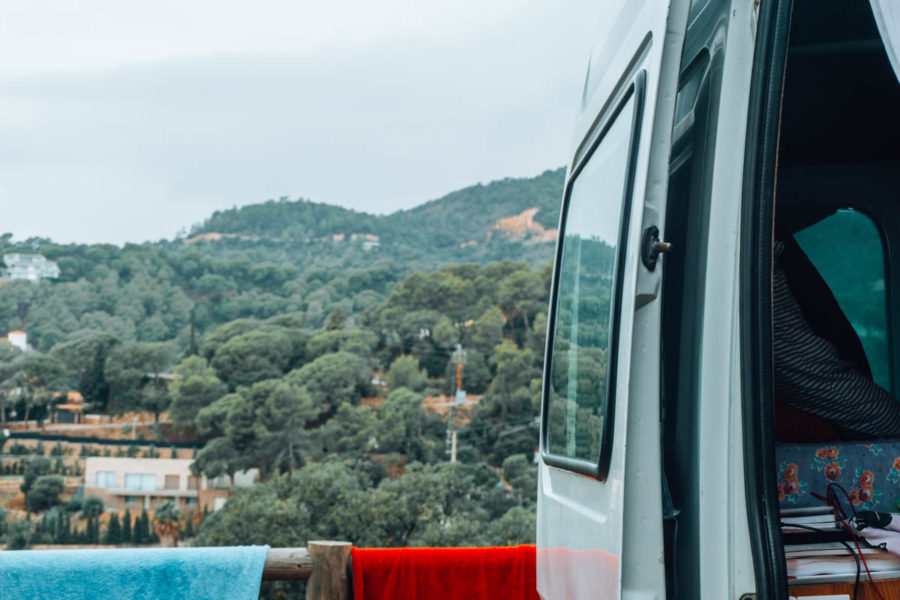 We left it there and walked to the city. We sat at a very cute and cheap café restaurant to have a bite and went to explore the cute town all the way to the fortress (which we forgot we wanted to visit later) and the sea. 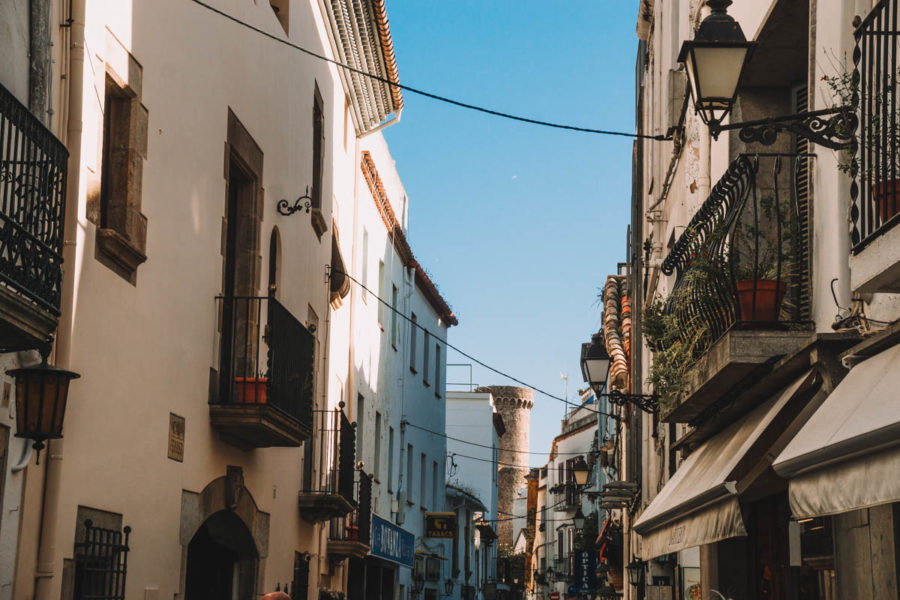 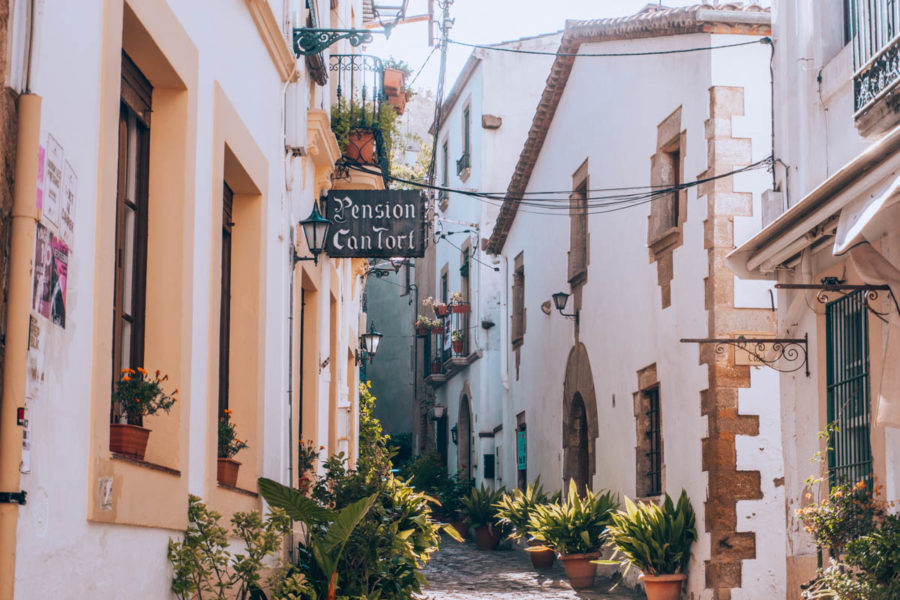 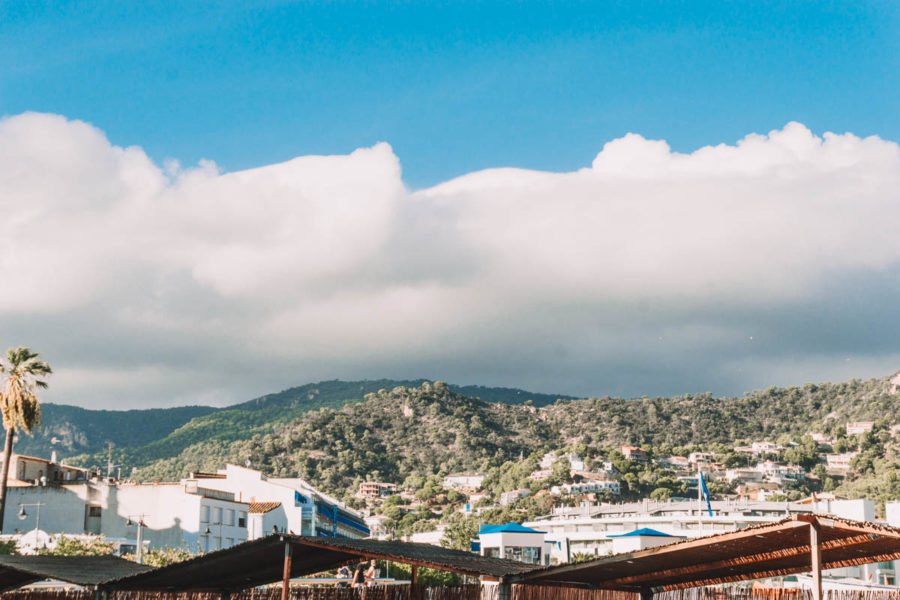 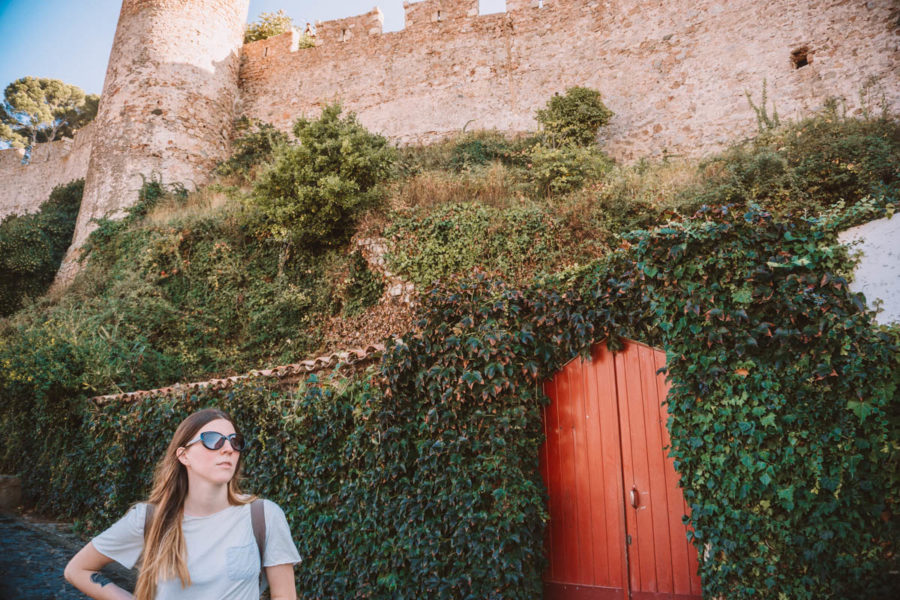 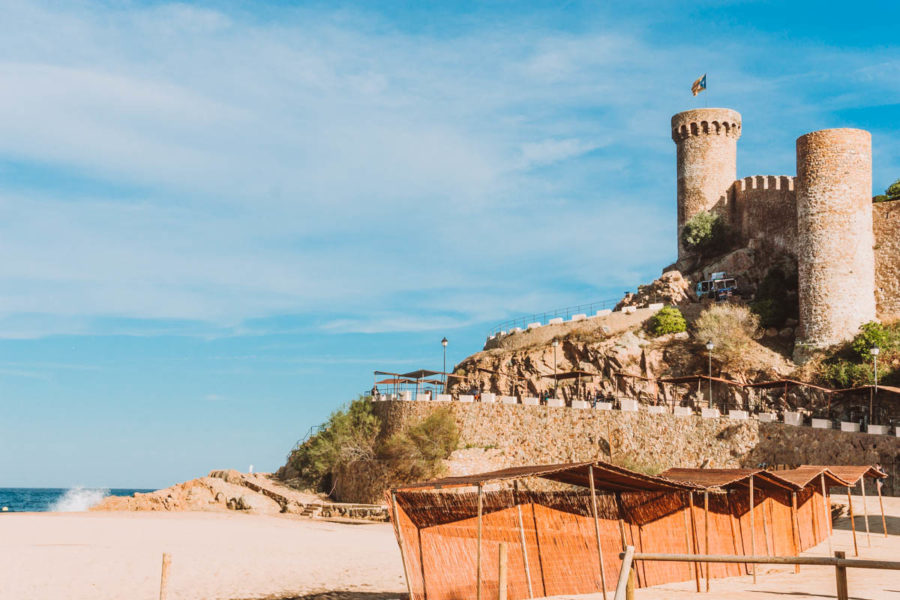 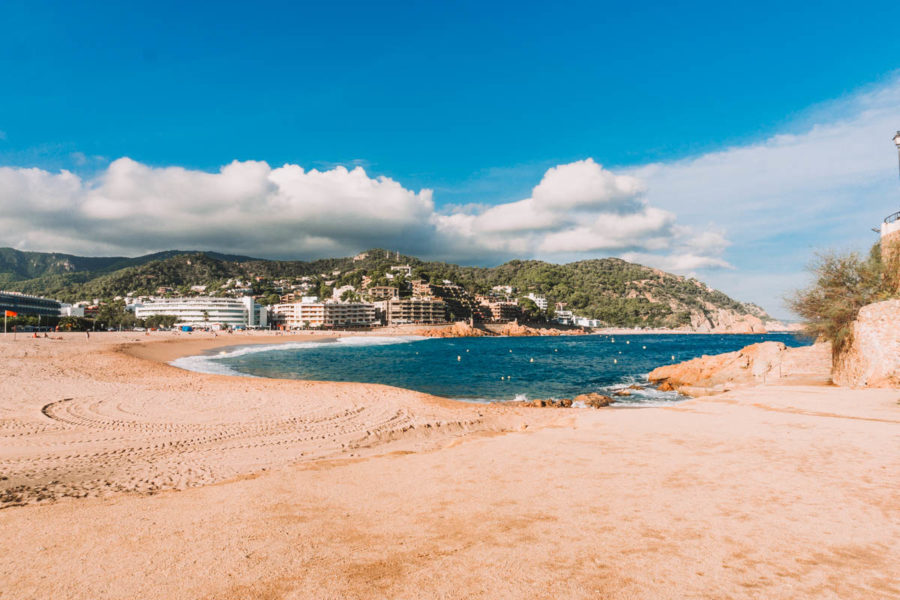 We did a few groceries and Simone left my pregnant ass on a bench while he went to get the van and drove to get me and then back to the camping. It was pretty expensive but definitely necessary as we suck at the mechanical stuff.

The evening was spent working, having diner, and watching tv shows.

There was a lot more campers (mostly RVs, actually) because it was a holiday there, but it was still fine. As usual, we ate super well, Simone spent some time at the pool and the beach while I worked. 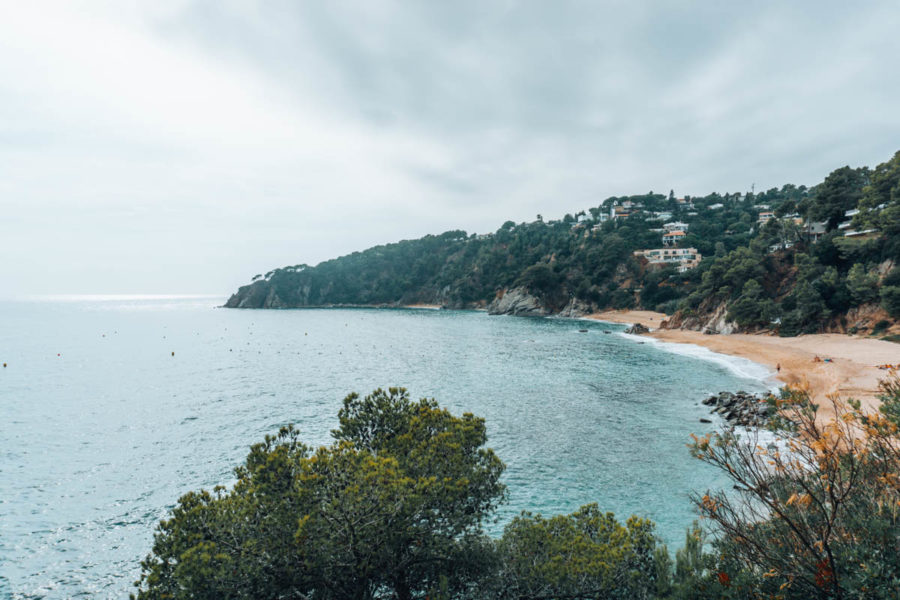 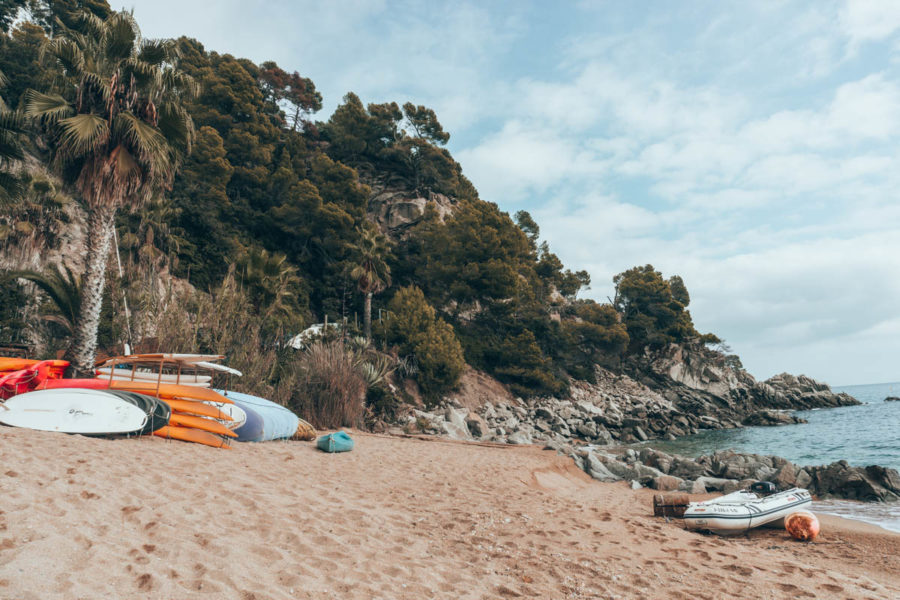 I still took a few moments off work to publish a post on my favorite vegan restaurants in Paris, in case you’d be interested!

It was our last day at Tossa de Mar, as we had decided to go South. The weather had gone back to being rather gray and it briefly rained while we were on the road…

And apparently it had rained a lot around our destination and we found ourselves in a bit of a pickle when what seemed the only way to cross a river was closed and half under water. It took us a while to find another way to reach the other side (as our height was a problem) but after some very stressful moments we did find the way.

To say the place we stayed at wasn’t as sexy as Tossa de Mar would be a huge understatement, but it was cheaper and had electricity, so who are we to complain?

Once the van was settled, we went to check out the beach before going back to hide (at least me!) in the van. There seemed to be some families gathered at the “camping” and while it felt really nice to see them all together living there, I didn’t feel super comfortable or welcome. Maybe all those stares were the reason why?!

While Simone tried to occupy himself by taking a swim with his bodyboard in the sea, exercising etc, I kept on working working working. Not super fun but we did watch a few tv shows, which helped to hang on… at least until the APOCALYPSE happened!

One of the very bad consequences of not watching or reading the news is that you don’t know what’s going on around you. Did you know a HURRICANE happened in Portugal? We didn’t. But we did get the aftermath of the dissipating hurricane, which means a storm with never-ending rain and lightning strikes. Freaky? A little bit. Super bad timing, because we had forgotten to buy drinkable water and leaving the van to buy some at the vending machine or even just getting water from the bathroom sink was totally out of question.

Fortunately at some point the rain stopped for literally 5min so I put on my raincoat and ran to the vending machine for cold water, filled a big bottle with water from the sink, and went back running with my feet completely soaked. Who do you think forgot their sneakers out before a big storm? Us!!! Other unfortunate consequence of this storm? The electricity supply machine stopped working, probably for security reasons, which is good but our night of working and Netflix was cut short and we went to sleep instead!

Tempted to go on a camper van trip around France and discover the beautiful Occitanie? If you don’t want to buy a camper or an RV, you can always rent one! Check prices and availabilities on World Wide Campers! 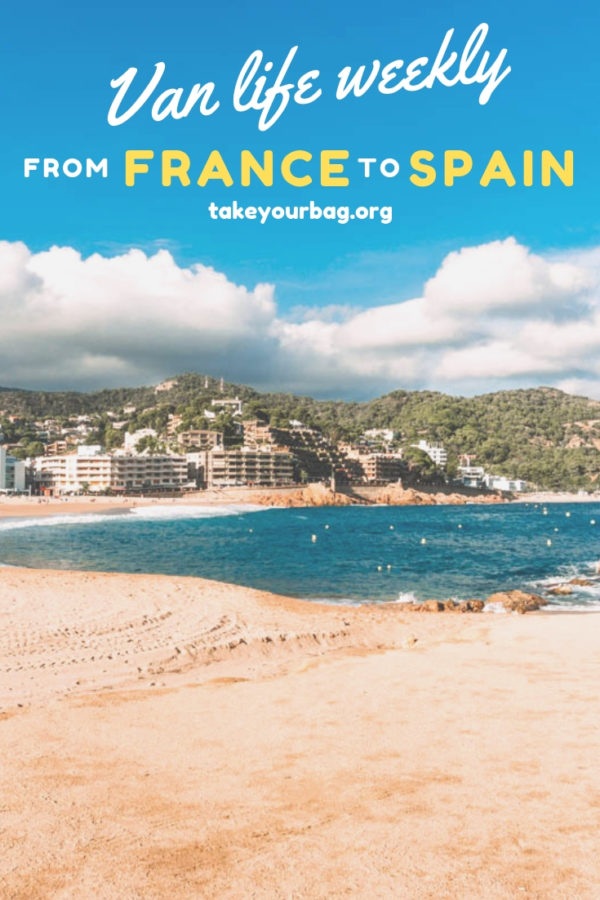