If you find yourself in the South of France and are looking for a beautiful town with lots to see while being able to enjoy yourself walking through history and beautiful nature, then Arles is the place for you! While it’s a rather small place, there’s plenty to see for history and art lovers and you won’t regret spending time there. It’s also a good kids-friendly destination so don’t hesitate to bring your little ones, they’ll have an amazing time!

We know the Colosseum in Rome well, so we wanted to take a short tour of the Arles amphitheater, the city’s most visited monument. The amphitheater is obviously less impressive than its Italian cousin (which could accommodate 50,000 to 80,000 people compared to around 21,000 for that of Arles), but I still find it incredible to be in the middle of its old stones which have seen so many shows (in the literal and figurative sense, the amphitheater having served as a dwelling and in particular as a “small town” with houses, streets, churches,… in the Middle Ages) in two millennia… It’s worth the detour!  The complexity of the monument is not necessarily obvious at first sight, I think it’s a good idea to go on a guided tour in order to appreciate truly. 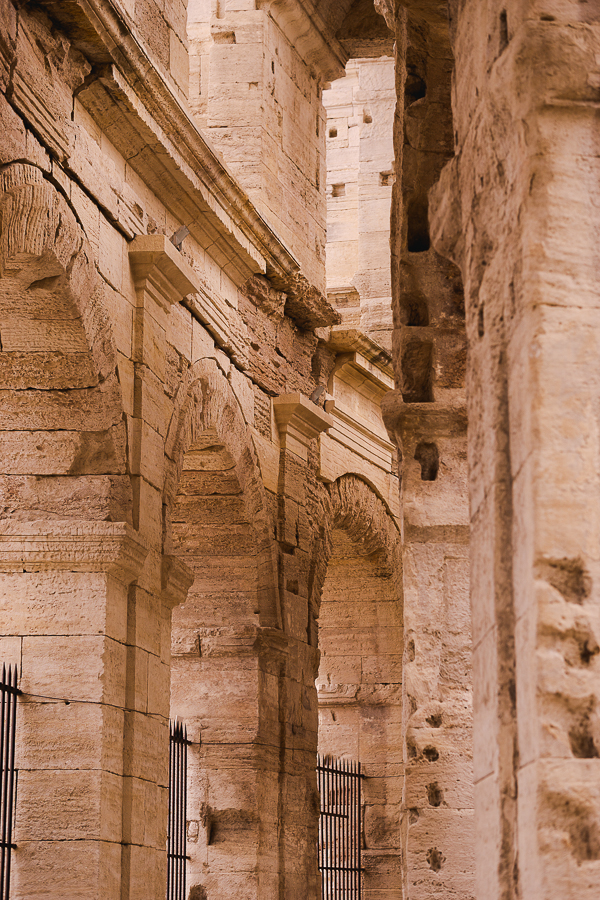 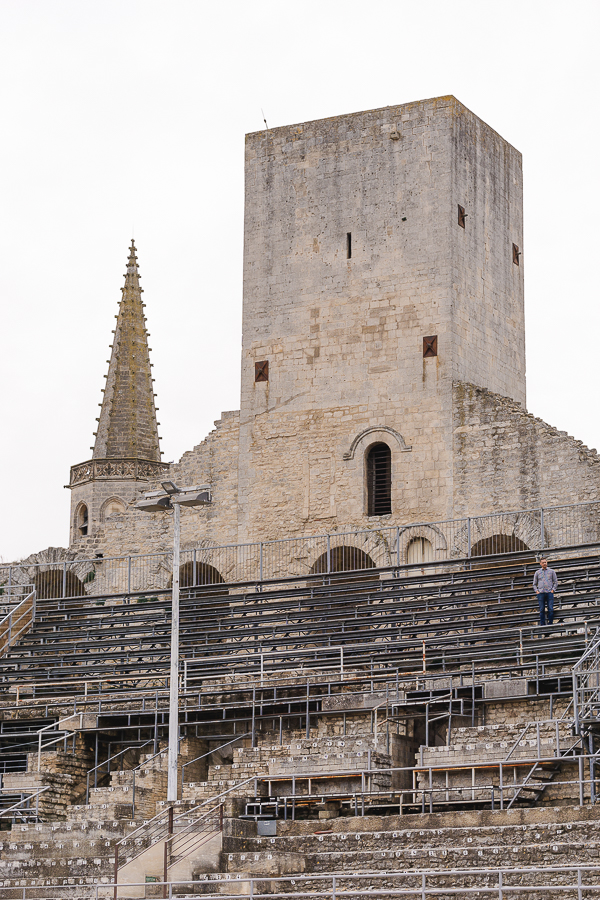 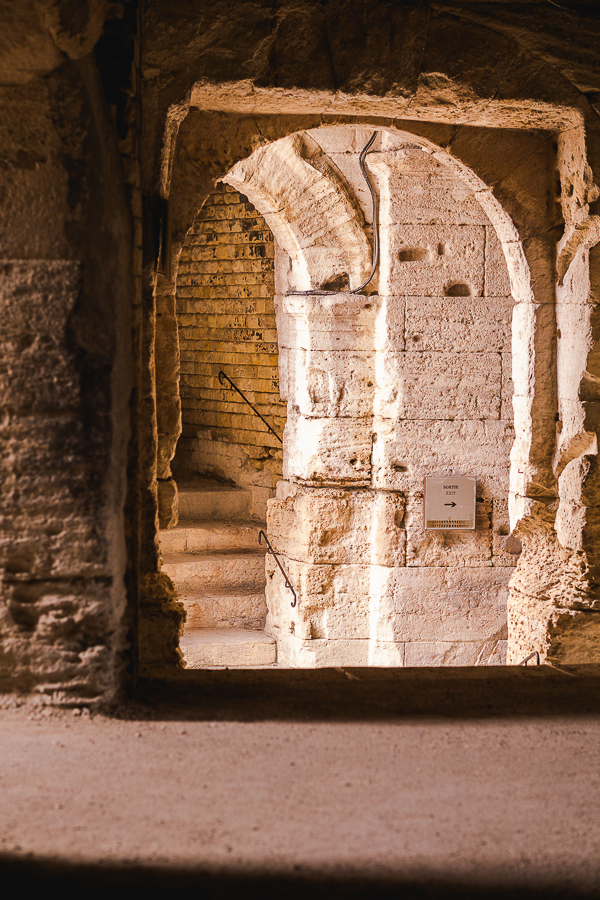 Founded in the 1st century during the reign of Caesar Augustus, the Roman Theater or Arles is located very near the Amphitheater. It’s also listed on the UNESCO World Heritage List however it’s not very well preserved : only the stage area, seating rows, the orchestra section and two columns survive. It used to be able to seat 8000 people, on 33 row steps. Today it’s a monument to be visited but it’s also used as its original meaning, being a place of shows and concerts. 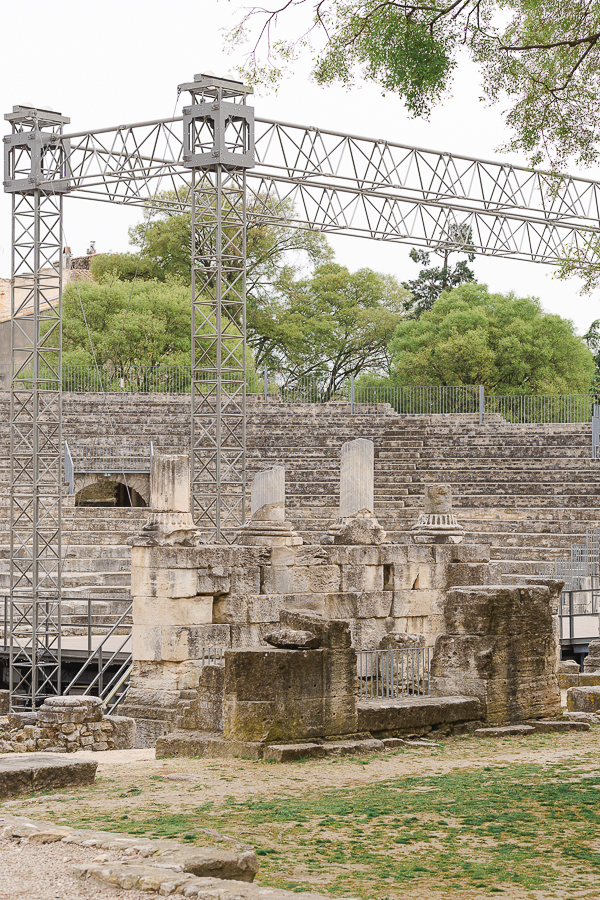 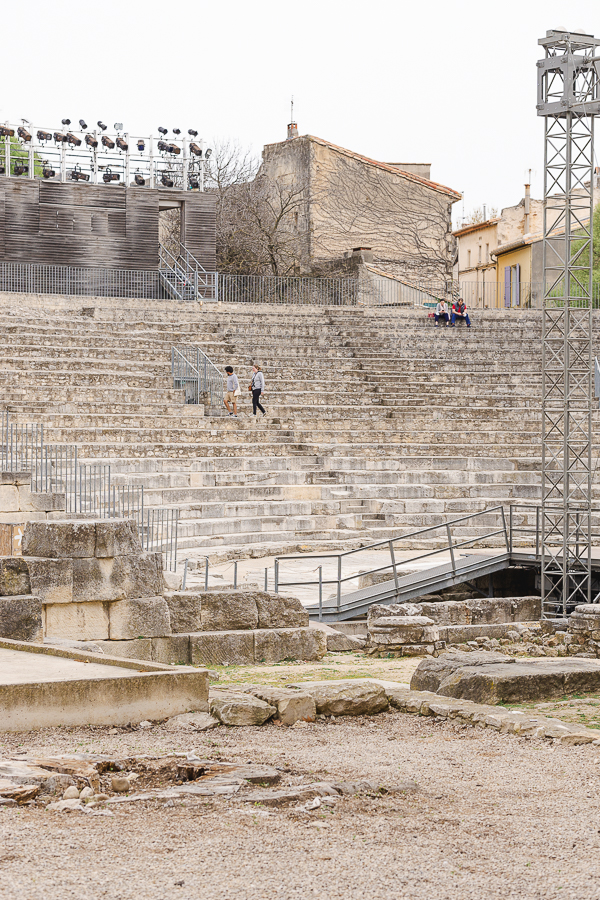 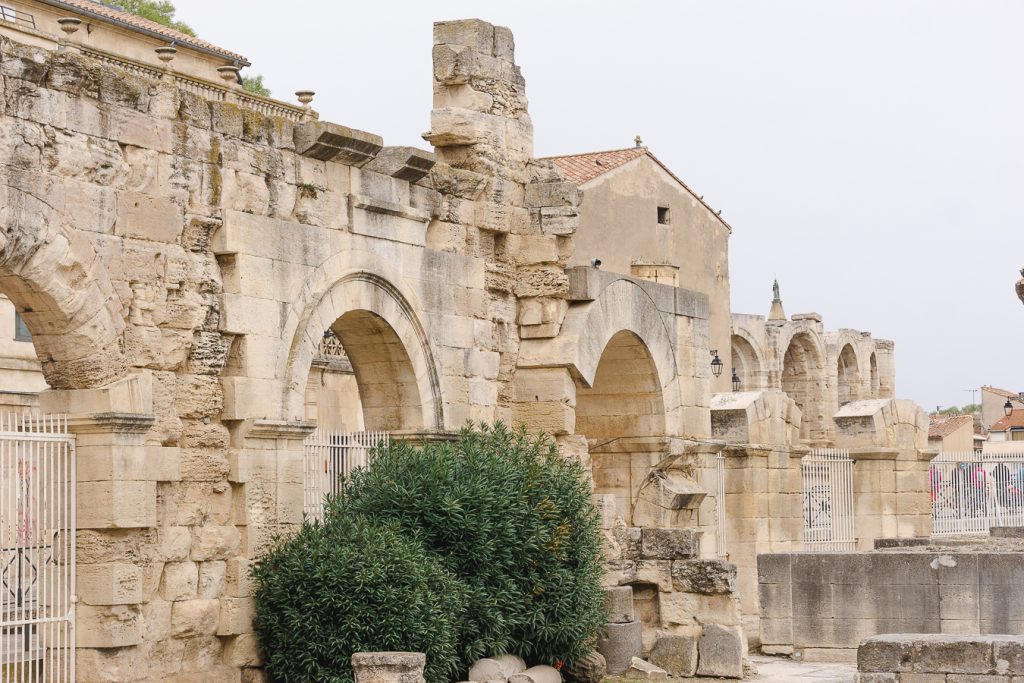 A singular place of which I was very curious, the cryptoporticoes – dating from the 1st century BC. J-C – form the foundations and therefore the underground of the old Roman Forum, today partially under the town hall located on the Place de la République (through which it is accessed) and the Palace of the Podestats. We hesitated to take the tour, not entirely sure that Cesare would enjoy being 6m underground in the dark. But he actually loved it! There’s not a whole lot to see, but I think it’s something to do, trying to transport yourself to the past and imagine what must have happened in these double galleries. However be careful not to stumble on the uneven ground and the infiltration of water which drips and makes puddles in certain places. We really enjoyed the visit and we recommend it! 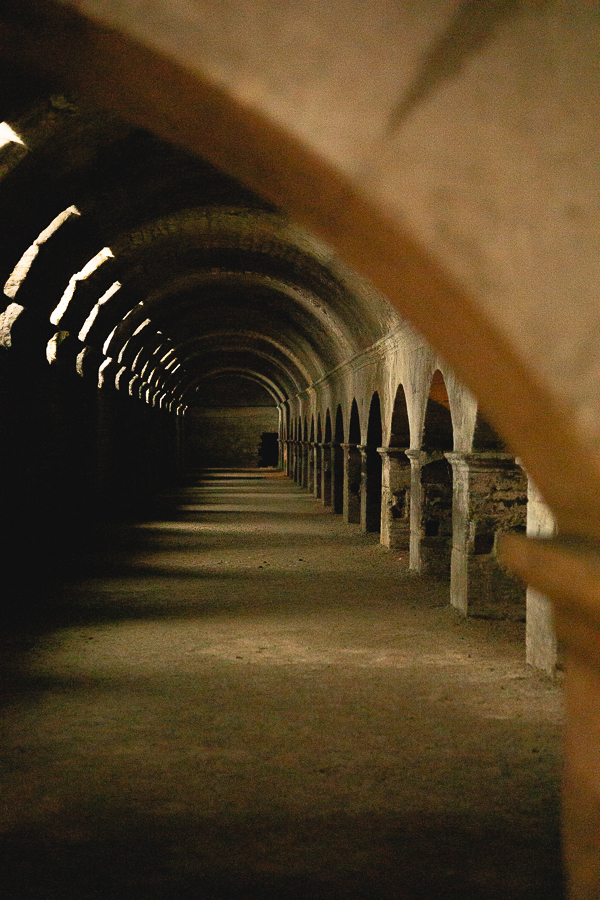 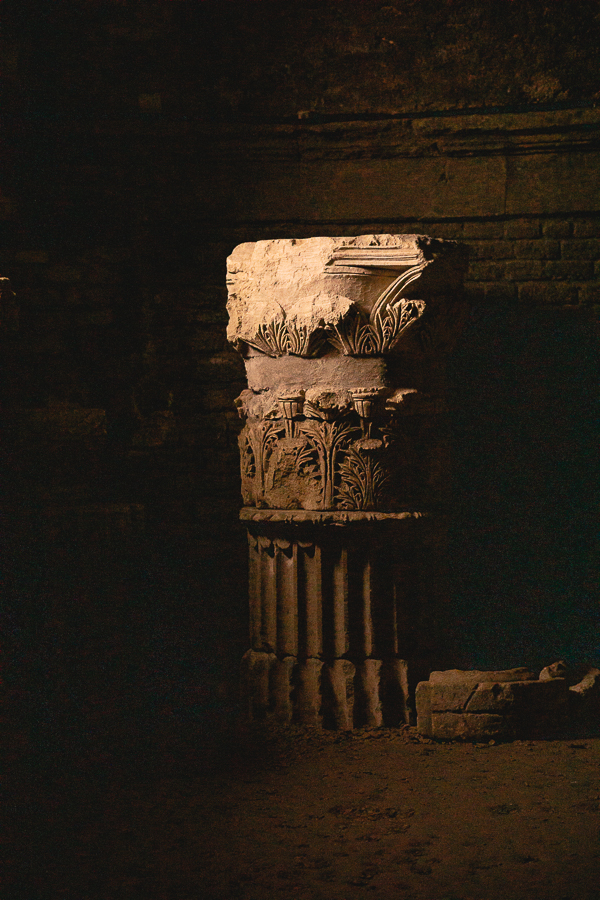 We really enjoyed the Museon Arlaten, the ethnographic museum of Provence, very accessible (for people with disabilities and by extension families with strollers) and really interesting. At the very beginning of the visit, you will be able to observe the evolution of the courtyard over time, from antiquity to today, thanks to a screen equipped with a very nice virtual reality device. The rest of the tour is about the culture and society of Provence back in time, and I would strongly recommend taking a guided tour or taking an audio guide. Cesare (3 years old) seemed very interested in lots of details. I discovered a lot of things, and we particularly enjoyed learning more about Provence de Mistral (time 2, with the two dioramas that plunge us into Provençal life in the 1900s and also the discovery of the “Provençal dragon” , the Tarascan) and popular arts and traditions staged in Time 4. I therefore recommend without hesitation the visit to the Museon Arlaten, ideally with a guided tour or an audio guide if you can. 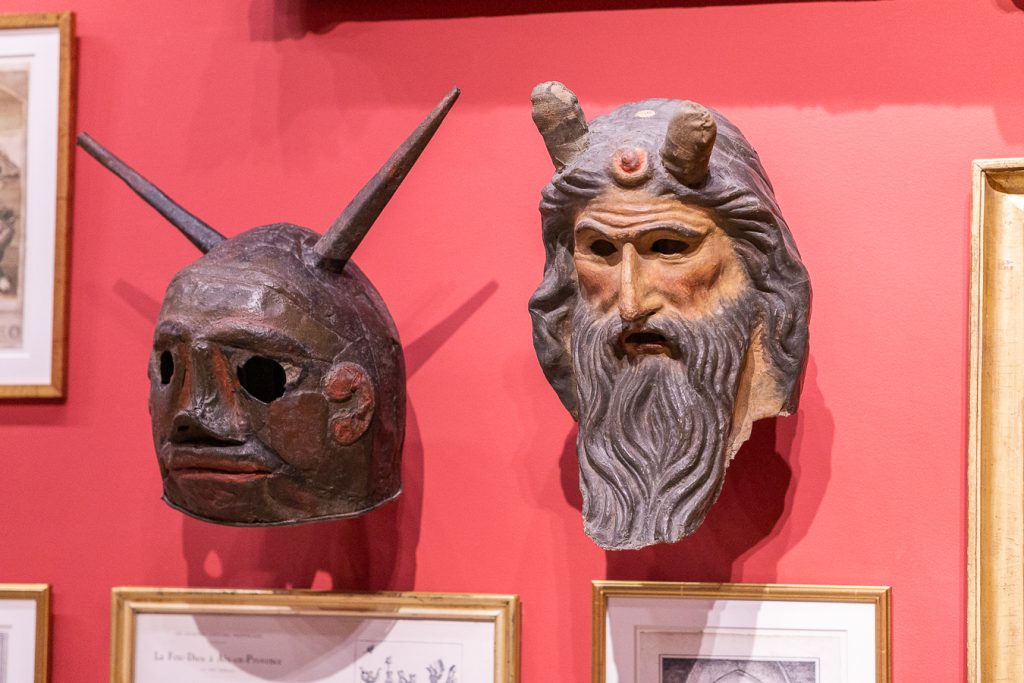 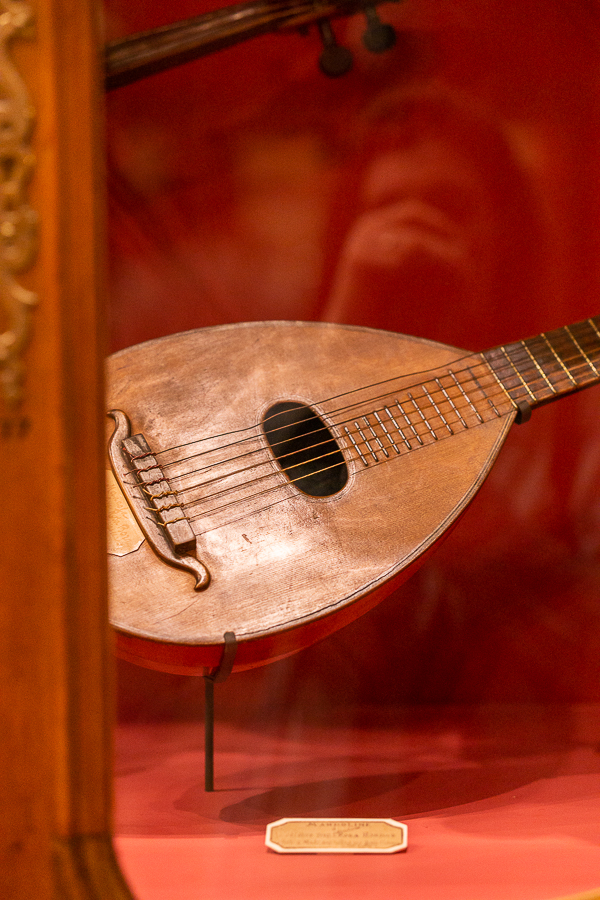 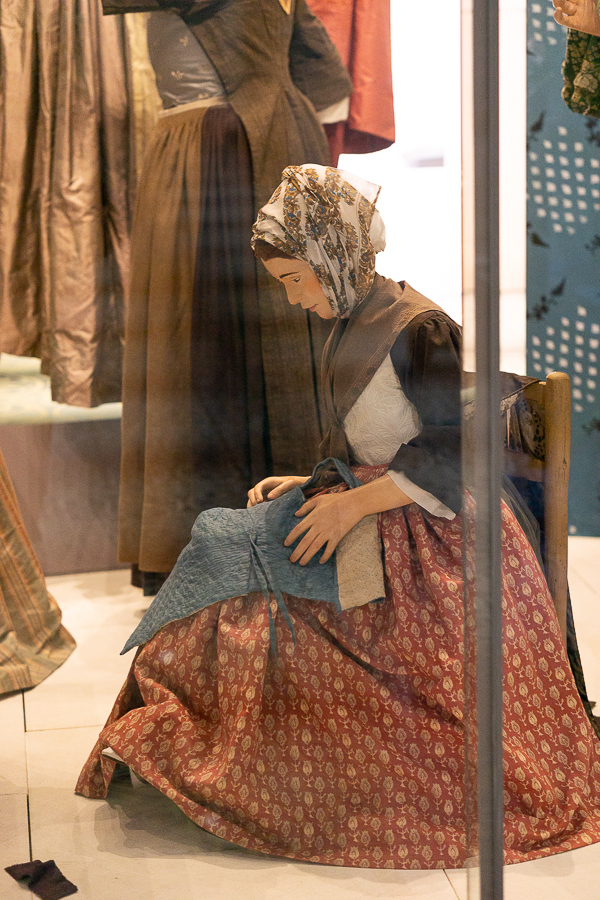 Espace Van Gogh is not to be confused with the Van Gogh Foundation. The Espace Van Gogh is a quadrilateral formed by the buildings of the former Hôtel-Dieu hospital, which operated until the 1970s and was visited by Vincent Van Gogh at the end of the 19th century. Then the hospital was transformed into a cultural and university space. The garden is freely accessible all day. There is also a small toy store – Boutique Junior, with very nice things. We advise you to do some shopping, or avoid it if you are afraid of a nervous breakdown of the little ones! 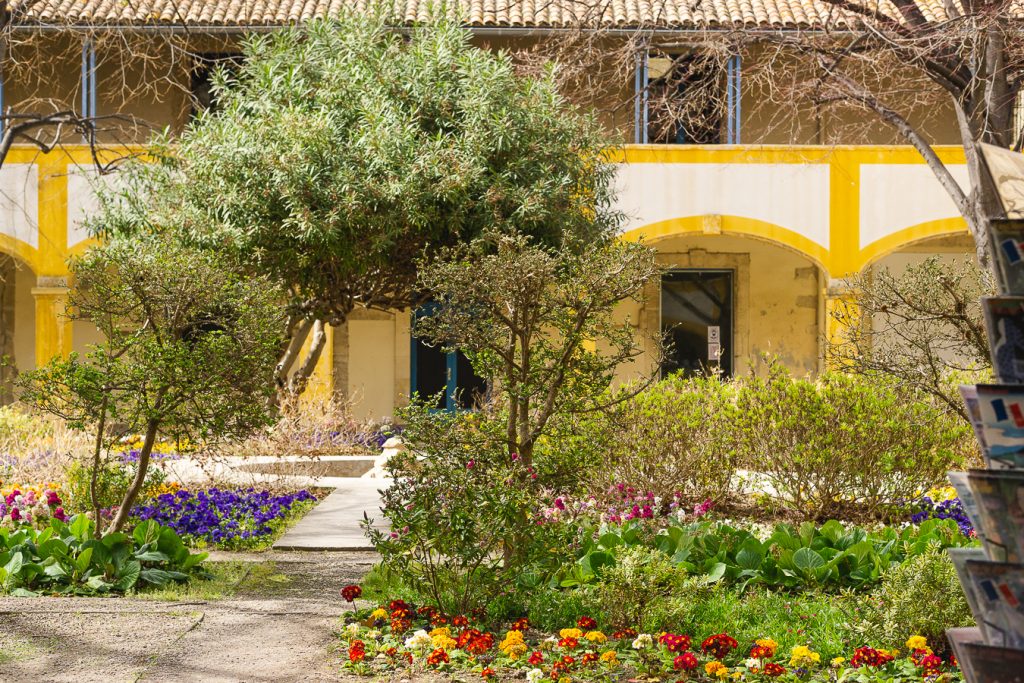 Built between the 12th and 15th centuries in the Romanesque style, the Church of St Trophime stand on the place de la République in the city center of Arles. It was actually built on the site of a basilica dating back to the 5th century and is well worth a visit. A UNESCO World Heritage Site, it features high ceilings and beautiful monuments, as well as a stunning cloister, an early-Christian sarcophagi and nine Aubusson tapestries from the 17th century. 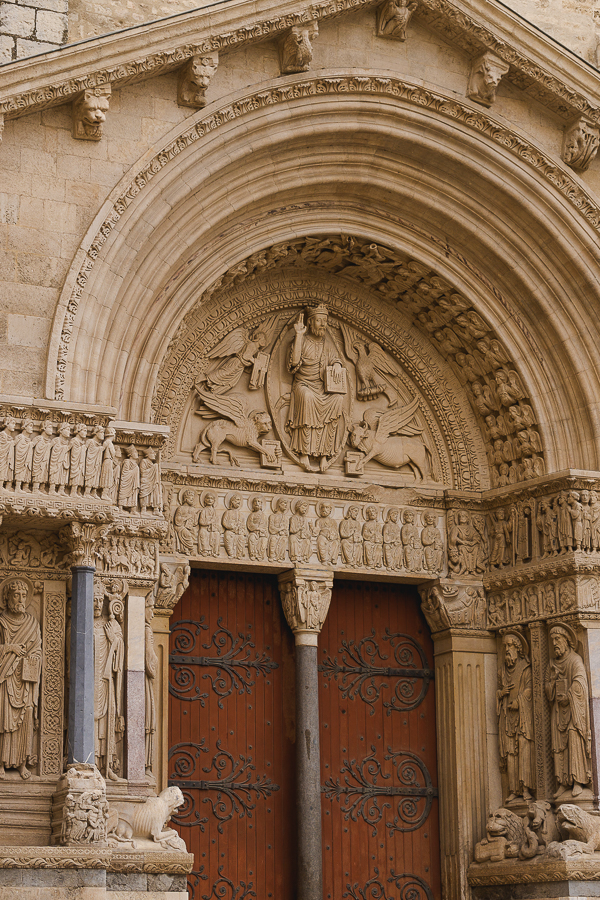 Not to be mistaken with the ones you can find in Rome, the Constantine baths in Arles are dating from the 4th century AD. J-C and are among the best preserved in France. At the time, Emperor Constantine had made Arles one of his imperial residences, but the baths retained their original functions for a little while after the fall of the empire. Then it’s been briefly occupied and finally forgotten. They are located close to the Rhone river close to the Quai Marx Dormoy

The Alyscamps is a large ancient necropolis from the early Roman Empire and is also famous for being a source of inspiration for Vincent Van Gogh. One of the largest necropolis of the ancient time, the Arles Alyscamps was particularly known in the Middle Ages and even mentioned in Dante’s Inferno. Don’t miss this UNESCO World Heritage site if you have the time to go see it.

This archeological museum is not to be missed if you are interested in the Ancient time and particularly the Roman Arles. It houses many antiquities and artefacts that will delight the history lovers, including a model of the water mills of Barbegal, early-Christian sarcophagi and last but not least, a Gallo-Roman boat discovered in the Rhône in 2004 and extracted in 2011.

The Fondation Van Gogh was born to pay homage to the famous painter but also his impact on current artists. If you have a particular interest in Vincent Van Gogh, the tourism board also offers a thematic itinerary though the city.

Perfect for the art lovers, the Reattu art Museum houses painting by Reattu but also other artists (relatives, friends and collanborators), drawing (including sketches by the fashion designer Christian Lacroix), sculptures and photographs (among others, some from Man Ray and Richard Avedon). It also regularly offers contemporary art exhibitions.

12. Take a walk around the city

Arles is a beautiful city, and you will enjoy strolling around, getting lost in the alleys of the Roquette district or even follow a themed itinerary you could find at the tourism board. 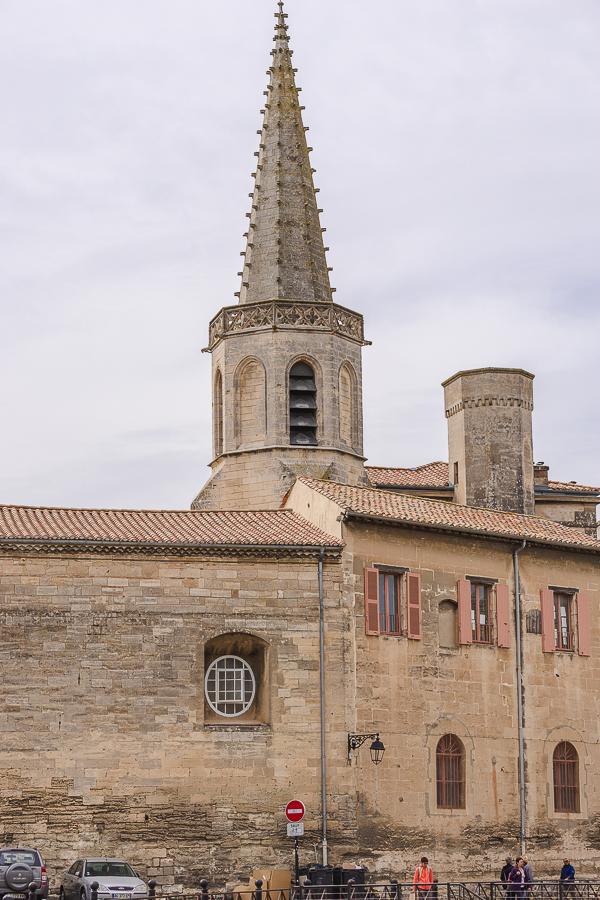 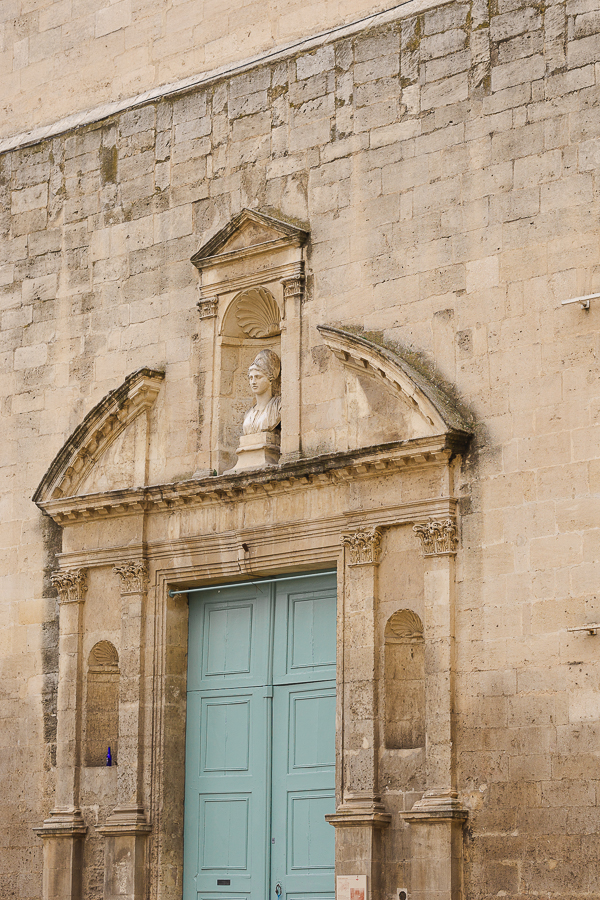 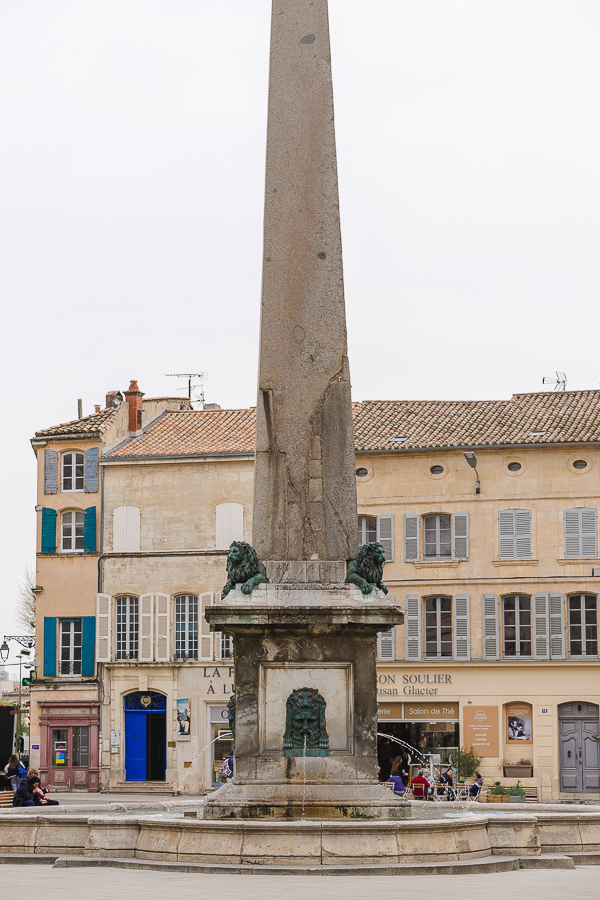 Luckily for me, Arles is a vegan-friendly city, with a number of options to dine.

We went to La Cantine Végétale, a vegan, organic, local and zero waste restaurant / café.Lunch was good, a large plate of raw vegetables and rice with a vegetable pie, and a cookie and a pie for dessert. The staff was really nice, we had a great time. It’s located right next to the Espace Van Gogh, a few steps from the Museon Arlaten and not far from the Cryptoporticoes and place de la République. 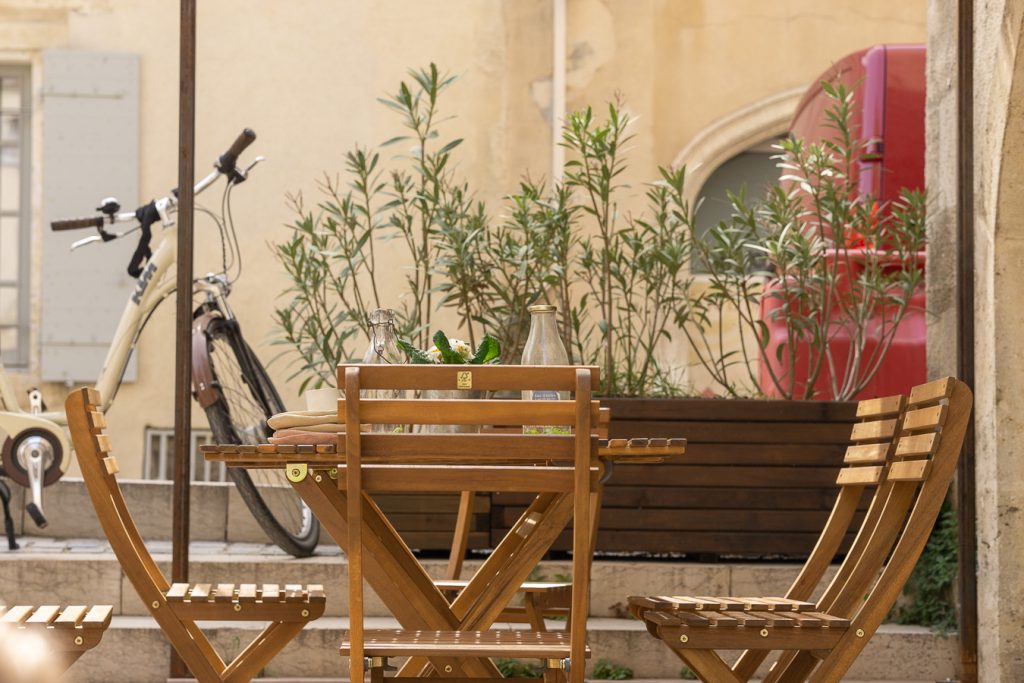 The Montmajour Abbey is a fortified Benedictine monastery erected at the gates of Arles between 948 and the 18th century and listed as a UNESCO World Heritage Site. It features a necropolis dug right into the rock with a cave chapel dating back to the 11th century (Ermitage Saint-Pierre), the Saint-Croix Chapel from the 12th century, a church with a six-beam nave and highly ornamental cloister also from the 12th, a 14th century tower, as well as the Saint-Maur Monastery and 18th century buildings, including a cellar added by Rudy Riciotti in the 20th century.

It’s also the perfect place to bask into beautiful panoramic views across the Alpilles mountains and the Crau plain.

A UNESCO designated biosphere reserve, the Parc naturel régional de Carmargue is a protected national natural reserve situated along the shoreline of the Camargue. It protects a wetland environment and marine area, including the lagoon called Etang de Vaccarès. The camargue horses are famous semi-feral horses. You can visit by walking on designated paths or book guided tours.

If you want to see Greater Flamingos and observe birds, a visit to the Salin d’Aigues-Mortes could be a great stop in the Arles area. It’s the first reserve of Greater Flamingos in Europe and hosts over 150 protected species of birds. It’s also a great way to know more about salt production and admire the view of these pink waters a little white salt hills. Know that the best time to see the water in a pink color is in June-July as the color is due to a pigment present in the water in summer. 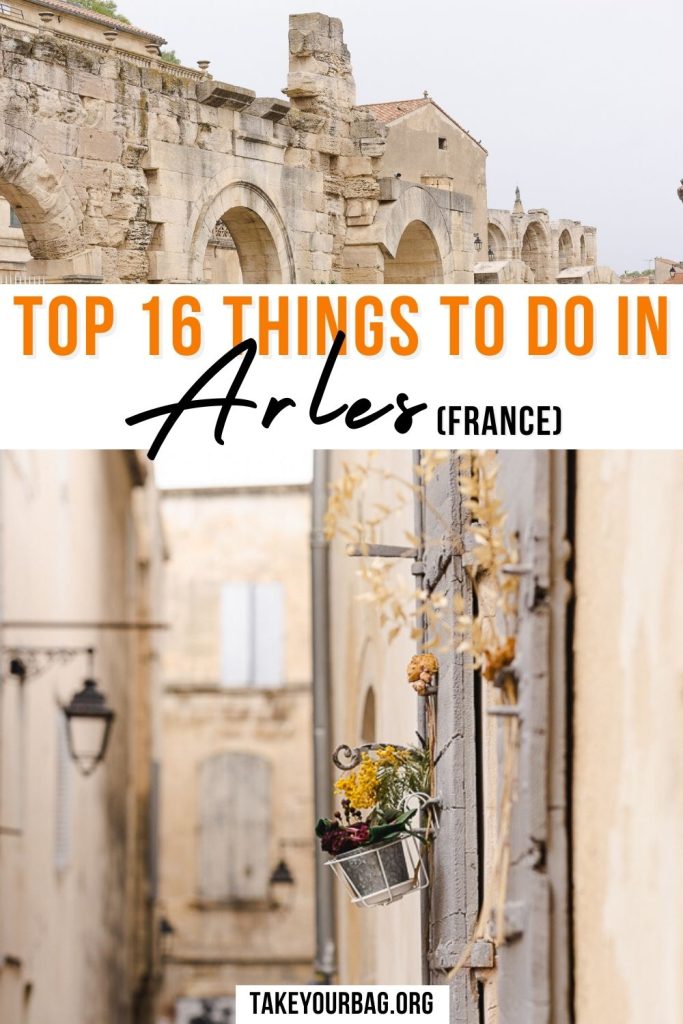 I love the South of France, but Arles is still on my list. Luckily I came across your article, so now I will be fully prepared for my visit… so many cool things to do in Arles.

Love all 16 of these things to do in Arles, France. Would love to visit…so beautiful!

Visiting the Saint-Trophime Cathedral would definitely be high on my itinerary because I absolutely adore cathedral architecture.

This looks superb and so quaint. I never new much about Arles other than Van Gogh’s time there. I would love to visit and see all the Roman ruins and theaters

Seems like a beautiful town in the South of France! Especially love that it is pretty vegan friendly, I would love to try the restaurant you suggested!