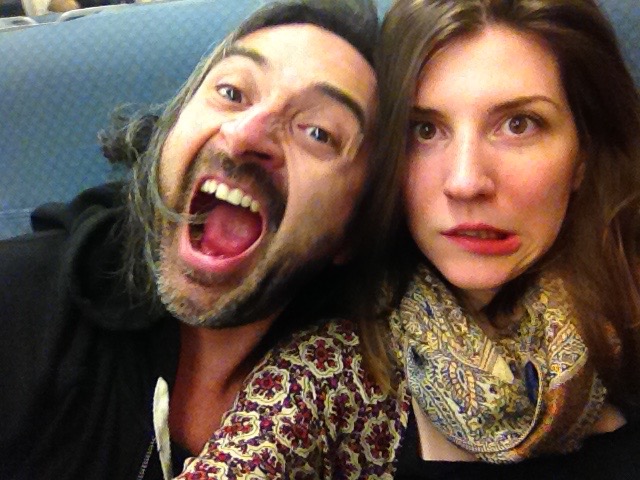 I’m not going to be original here, this is the perfect moment to reflect on the past year. 2016 has probably been my favorite year in my life so far, and so many things happened it’s hard to make it short!

We took it YOLO and booked a train from Paris to Rennes on the evening of the 31st of December 2015, a train from Rennes to Paris on the morning of the 1st of January 2016, and no hotel. We had packed a bottle of wine that we opened on the train and finished as midnight rang.Â Then the whole night was spent popping in and out of bars to drink shots, making ourselves feel sick on the fair rides, and dancing at the big New Year Party at the city hall! It was fun and crazy, just as we like our life to be!

Another new city on the map for us, and the first time we went abroad together as a couple. Truth be told, be were exhausted at the time and spent more time in our hostel room than discovering Copenhagen, but we enjoyed it nonetheless!

Simone needed to do some stuff and see friends in Rome, so he went back in April. I was working but I managed to join him for a long weekend. His family leaving in the States was there, so it was the perfect opportunity to meet them before our trip! The weather was incredibly sunny and we borrowed a scooter so Simone could show me some cool spots of his city that I hadn’t seen before! Rome is so huge there’s always something new to discover!

We got married! and partied in Paris and Rome: May

The most exciting day of the year was, of course, the day we got married! It was nothing big and nothing fancy, but I had my loved ones around me, Simone had some of his, and we had a great time. It was very hectic, but it was definitely “us” (we had avocado maki and pizza for the diner party) and it was lovely. It already feels so far away! We’ve done so much since then! It took place on a Thursday in Paris, and we flew the next day to Rome to celebrate with more of Simone’s friends. My best friend Coline, her boyfriend and my mother accompanied us, making it even nicer for me!

Roadtrip in the USA: leaving Paris in June

Not long after the wedding, we moved out of my apartment and I started working as some call a digital nomad. I’d been interning for some research linguistic work and they decided to hire me part-time from June to October. As this work can be done anywhere as long as I had access to a computer and an internet connexion, it was perfect. So we took off for our (honeymoon) road trip in the USA, the trip that launched this blog as our travel diary.
In June, this is the cities we’ve traveled to:
New York, NY
Loch Arbour, NJ
Boston (& Cambridge), MI

Roadtrip in the USA: Eastern Part of the US until the 28th of July

Road trip in the USA: California from the 28th of July to the 4th of September

Even though we had a great time before and I fell in love with Philadelphia, California was an outstanding part of our trip. No surprise there, we knew we’d love it. But I had no idea how much this state had to offer, and I just can’t wait to go back!
Our Californian expedition took us to these places:
San Diego
Santa Cruz
Sacramento
Yosemite NP
Stockton (we got lost)
Napa Valley
The coastal Highway 1
Bodega Bay
Mendocino
Fort Bragg
Oakland
San Francisco
Berkeley
Lake Tahoe, NE
Los Angeles
We made Top 3 of the places we’ve seen, but it’s very hard to not put all of California in the first position! Our favorite place ever is San Diego, but we had an incredible time pretty much everywhere, full of adventures and discoveries. Of course, the hardest part was to leave, even though we were pretty much tired of all of these bus rides!

Back to Paris, Verona & Rome: 4th September to 24th November

We have been killed by jet lag. It hit us incredibly hard once we got back to Paris, and it only got better around two weeks after we arrived. Fortunately, I had already decided to postpone my dissertation for another year, my job was extremely flexible, and we were doing some cat sitting for friends, so we had nowhere to be except home. Which was perfect. The next few weeks I spent working (my contract got extended until the end of the year), studying at the library, and seeing my friends. Then we left Paris with a night train going to Verona, where we stayed at Simone’s aunt place for a few days, before taking a bus to Rome. Once there, I took more time to work while Simone did what he had to do, and my dad and his wife eventually joined us for a few days of intense sightseeing and touristing! It was really nice to get some quality time with them and taking a moment to rediscover Rome’s famous gems.

We had planned to stay in Asia until I had to come back to Paris to hand out and defend my Master’s degree thesis. Simone was supposed to work in Hong Kong while I’d work remotely and studied. We had special stand-by tickets that were incredibly cheap to Tokyo and left on the 24th of November. A friend of mine let us stay at her place in the center of Tokyo, and Simone discovered a place I adored since the time I came for the first time 10 years before. After a few days, we flew to Hong Kong, only to be disappointed. So we took the decision to head back to Tokyo after 10 days, enjoy this place we both loved for a week, and go back to Europe.

Rome & Paris regrouping: until the end of the year

A friend of mine was going to see her family for Christmas, so she let us stay at her place in the heart of Paris. I’m talking 5th Arrondissement Latin Quarter rue Mouffetard. The location of my dreams! So after a couple days in Rome, we took a 23 hours bus ride back to Paris, where we still are for now, until our next destination!

There’s only so many night bus rides that you can take…: At the end of our US trip we were so tired of long bus rides when we wouldn’t sleep much that we decided to do the long Santa Cruz – Los Angeles leg by day. I think it was a good and wise decision. Maybe it cost us one day and didn’t save us the price of a night in a hotel, but at least we weren’t feeling miserable when we arrived! It doesn’t mean that night rides are bad, just that doing half a dozen of them in one or two months can take its toll…

There’s nothing like getting ahead of your work load: Sometimes, I’ve missed out on things because I had to work thanks to being too lazy when I had some free time… It can be extremely frustrating.Do your research better: Having done more research on Hong Kong probably wouldn’t have prevented us from going, because we like to make our own experiences. But maybe we’d have gone with a few less expectations…

Don’t expect your postcards to arrive to destination: Well… nothing to add!

So now, where to?
We don’t know yet, but somewhere English-speaking in Europe, where Simone will be able to work as a bartender and I will study!
*Edit* We ended up living in Belfast, in Northern Ireland!