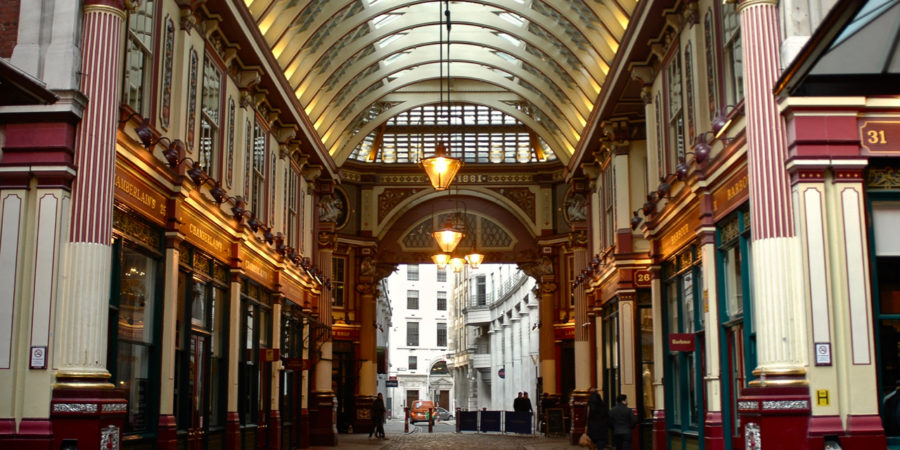 The very first part of our Harry Potter weekend experience in London was to get on a bus tour of Harry Potter locations with BritMovieTours. We had already been on a great Game of Thrones bus tour in Northern Ireland with that company, so we had high expectations. We’re happy to say this Harry Potter bus tour did not disappoint and that we’re glad that BritMovieTours hosted us for this review!

The London bus tour and the guides

We left around 2pm as planned, and it was very easy to find our guides: they presented themselves and had magic wands and Harry Potter scarfs, hard not to spot them! 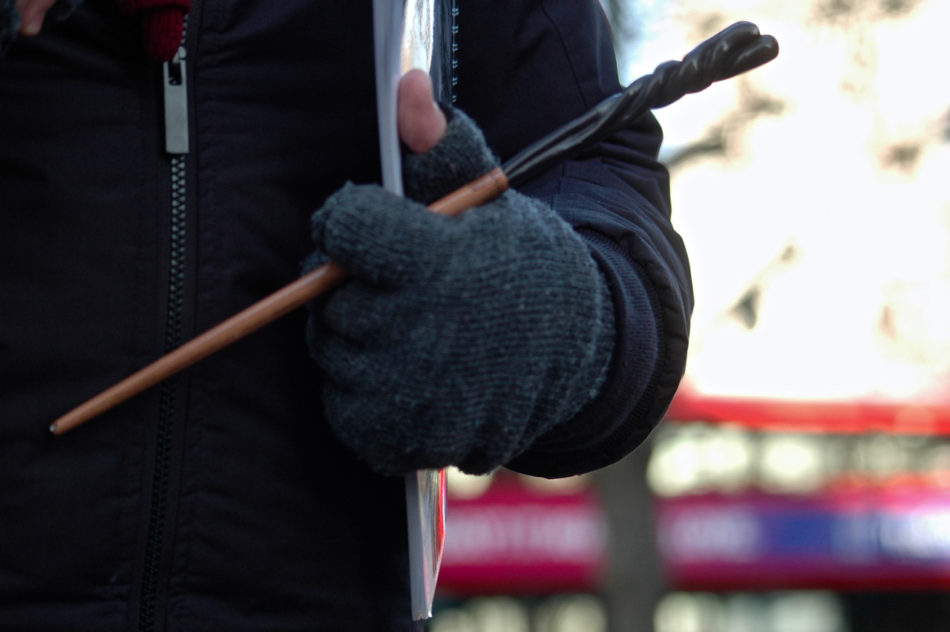 The bus was full, which made us a bit apprehensive… We couldn’t get seats at the front of the bus and we got worried we might miss some things by not hearing them. But BritMovieTours had planned everything very well: the chatting on the bus was done via a very good mic, and the bus was divided in two (hence the two guides) for the stops. We could also perfectly see and hear the screens showing some clips of the movies to put us in situation before and after each stop – which we thought was a great idea! 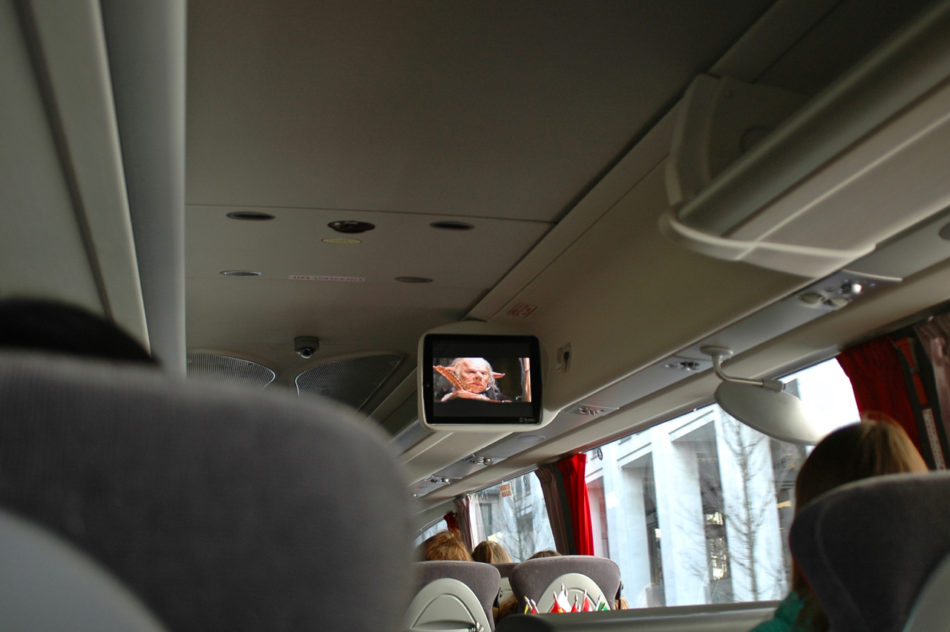 The guides explained from the start that the tour could last between 2:30 hours and 3:30 because the London traffic can be quite unpredictable! We honestly didn’t notice the traffic, even if our guides told us a few times that they had to find another way to the next stop because of diverted routes. Which showed their professionalism and perfect knowledge of the area! It also allows you to do somewhat of a London bus tour while catching all the Harry Potter locations, not bad for the (grand)parents who might not be total Potterheads!

In the end, our Harry Potter London bus tour took a bit less than 3 hours, not including the Platform 9 3/4 since it’s where the tour ends and is not included in the experience (which is good, and you should absolutely skip it if you’re planning to go to the Warner Bros Studios!). Special thanks to our group’s guide, who was very talkative (something you should look for in a guide!), extremely knowledgeable, and quite funny!

Driving by Gringotts Wizarding Bank and the Savoy Hotel

Our tour started by driving by Australia House which was used to film Gringotts Wizarding Bank. The place is not open to the public – except sometimes on a weekend in September – and we didn’t get out of the bus to take pictures. We also passed by the Savoy Hotel, a beautiful place where lots of very famous artists have spent a consequent of time and lived, as did Richard Harris – the original Dumbledore from the two firs Harry Potter movies.

The Ministry of Magic : Scotland Place

Our first stop out of the bus was Scotland Place, which you might recognize as the Ministry of Magic in The Order of the Phoenix and The Deathly Hallows. It’s actually a very popular area for filming, so it might remind you of other films or series. Our guide gave us interesting and funny information, asked questions to give us the opportunity to earn points for our Hogwarts House (10 points to Gryffindor!) and showed us pictures from the movies so we could make our own. Don’t be shy, and take the picture. It’ll be great memories, personally I laugh every time I see this picture! 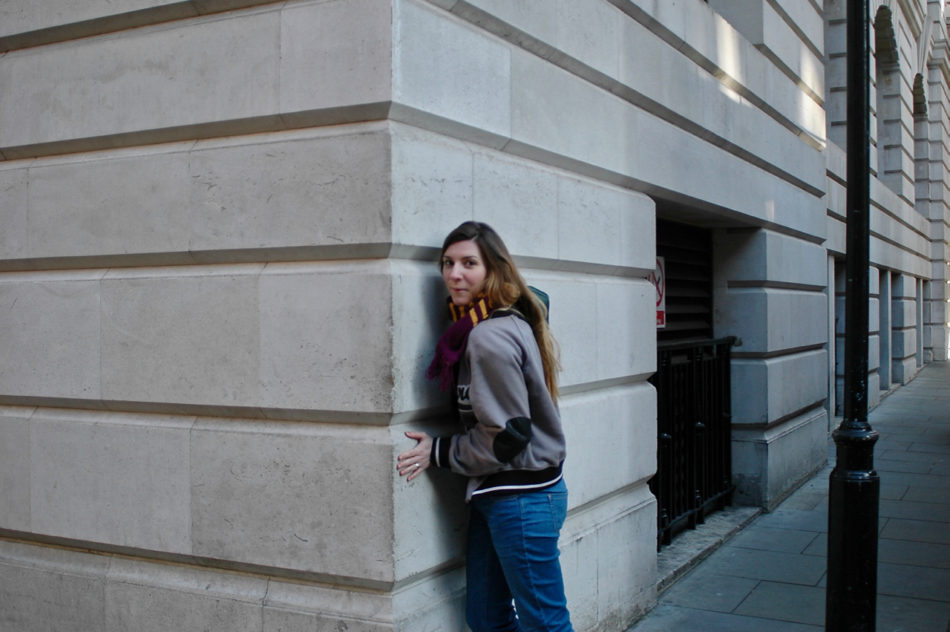 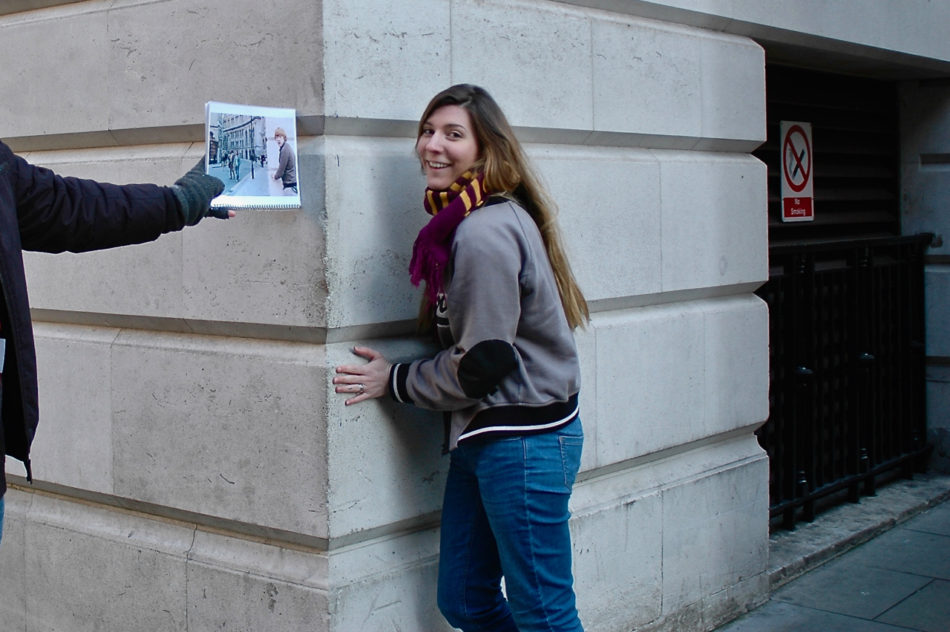 Driving by Westminster Station and the Lambeth Bridge

Westminster Station has been used in Harry Potter and the Order of the Phoenix, and is the place of a few funny moments as Arthur Weasley tries as well as he can to pass as a Muggle.
The Lambeth Bridge is the bridge crossed by the Knight Bus – as it squeezes to pass in-between two buses – in The Prisoner of Azkaban.

We started at the Millenium Bridge, the one the Death Eaters destroyed in The Half-Blood Prince movie. Its architecture  – and the fact that it’s already somewhat wibbly wobbly in real life – perfectly fit the visual effects they wanted to achieve in the movie. You’ll also have a great view on the London bridge, so take a few moments to admire the landscape – but avoid Death Eaters at all cost! 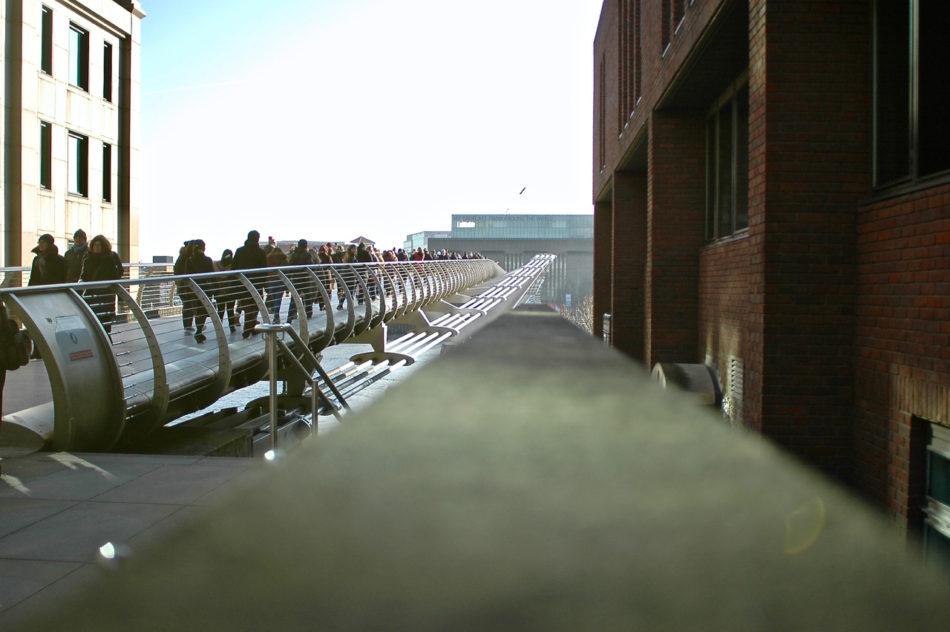 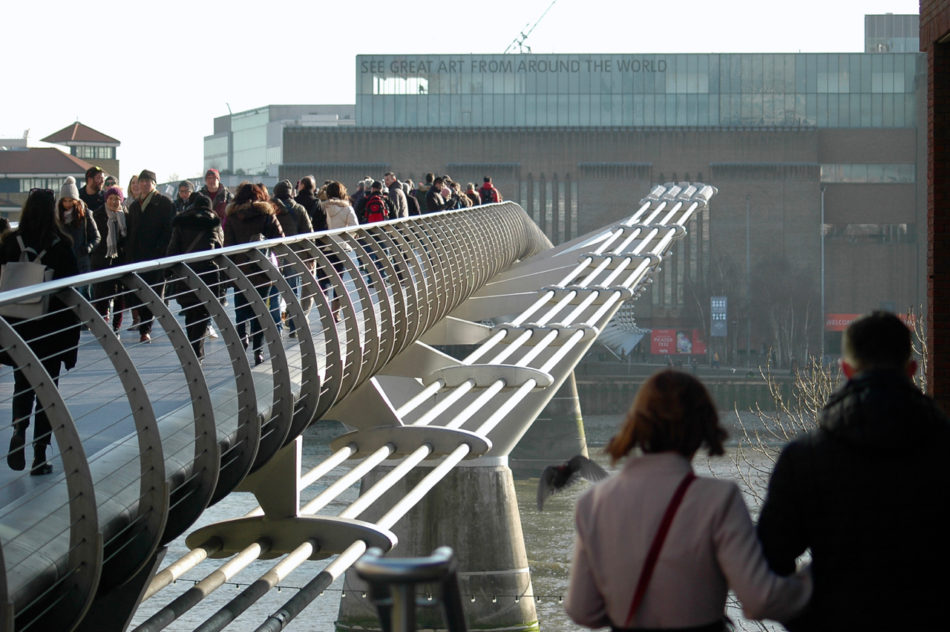 A staircase in St Paul’s Cathedral is used in the movies as the staircase leading to the Divination classroom. We didn’t get inside the Cathedral (but you could come back anytime during your stay, as you might want to explore the place in depth) but learned a few interesting facts about it. Will you spot the Phoenix?! 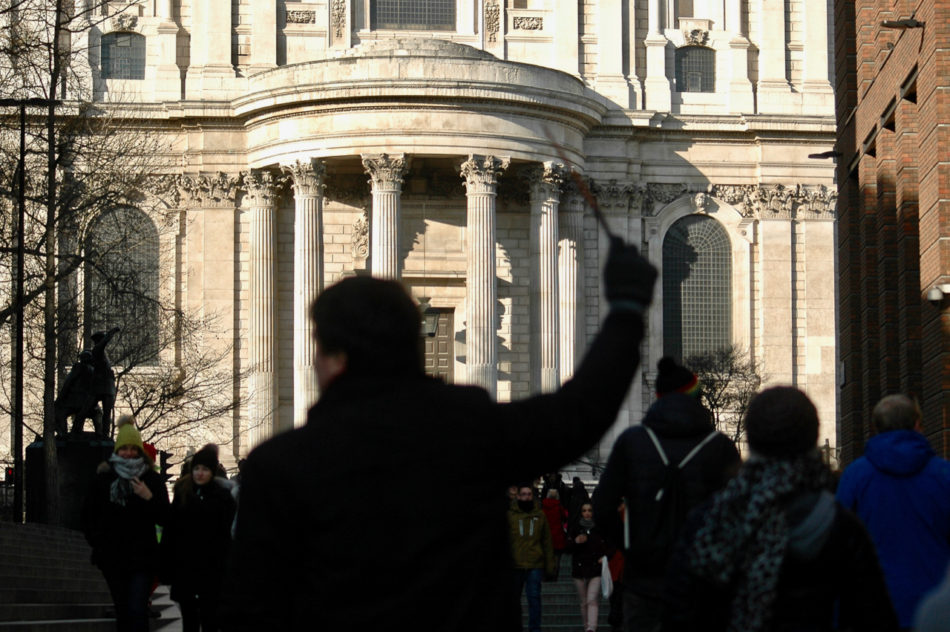 The two locations of the Leaky Cauldron : Borough Market and Leadenhall Market

On our way to the first location of the Leaky Cauldron, I’m proud to say that I earned 10 points to Slytherin by answering right to a question!

Ahem, back to the tour!

Did you know that two different locations in London have been used to film the Leaky Cauldron? Well, now you do! One is at the very lively Borough Market – it’s now a Mexican Restaurant. 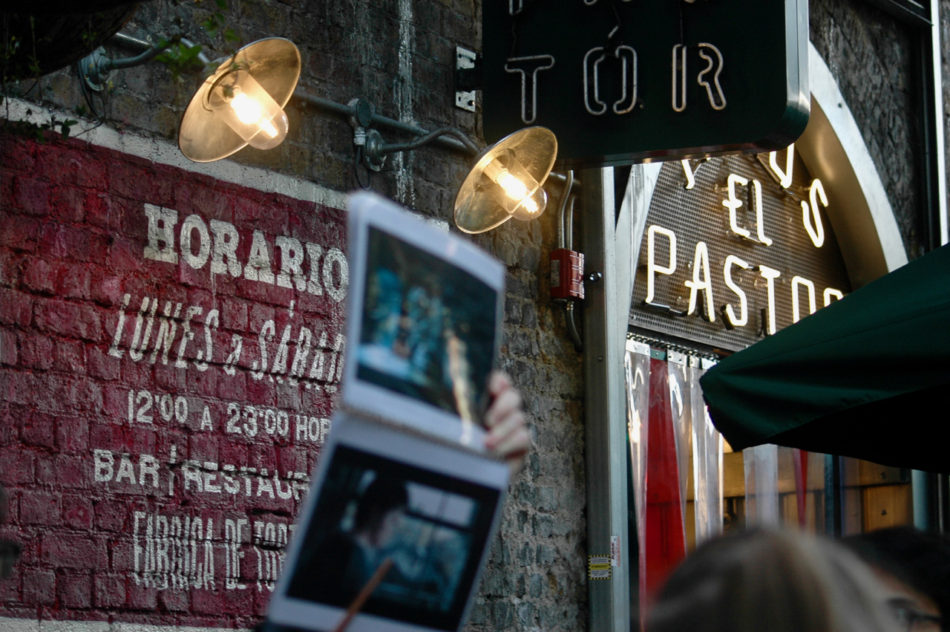 The second is at the beautiful Leadenhall Market. It’s the one used for the first Harry Potter movie: find the blue door and that’s it! 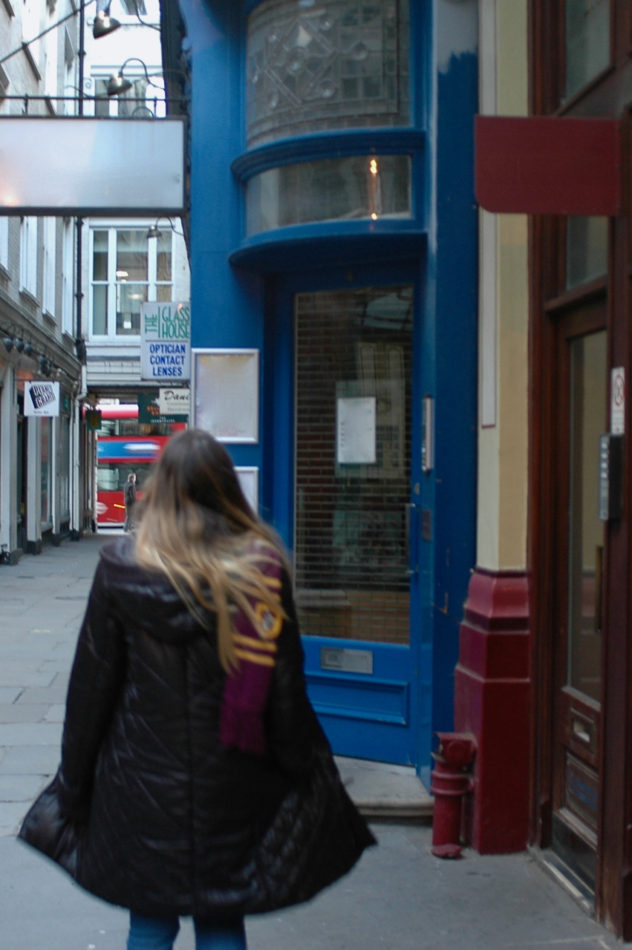 Leaden Hall also happens to be one of the filming location of Diagon Alley, and the spirit definitely is there! The place is beautiful and completely deserted – I’m not joking, completely deserted – during the weekend! Plenty of time and space to take all the pictures you want and bask in the magical atmosphere. 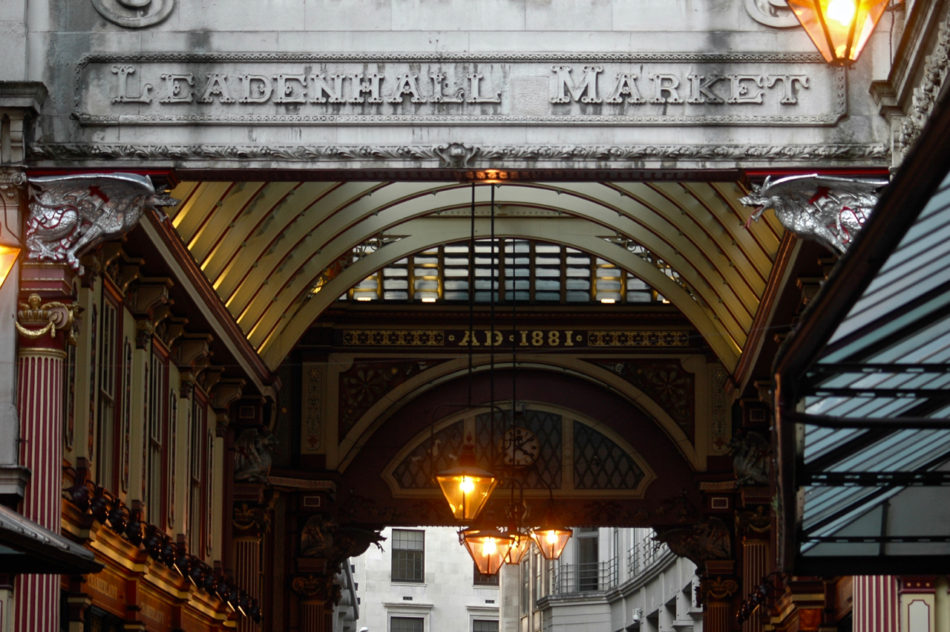 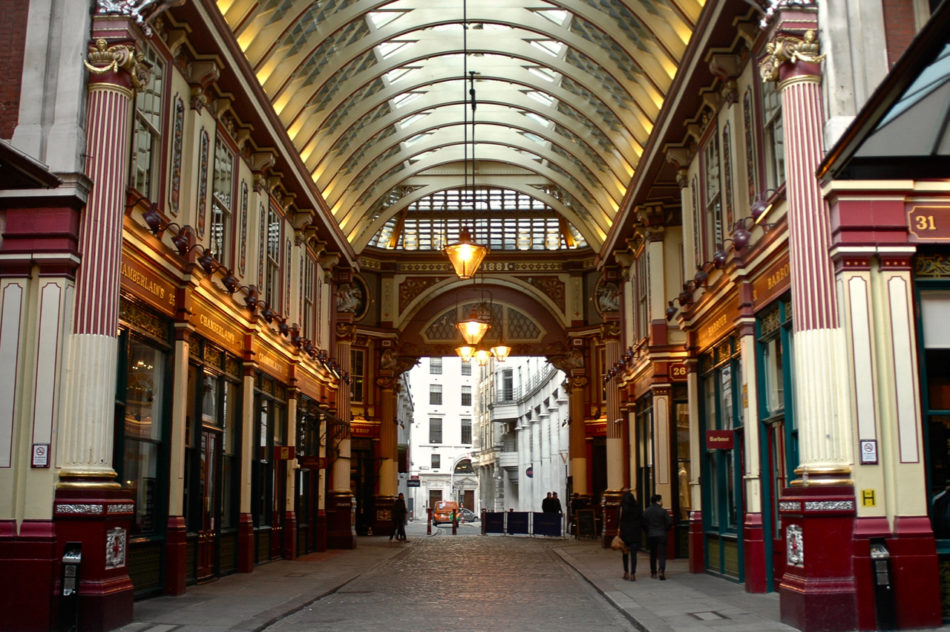 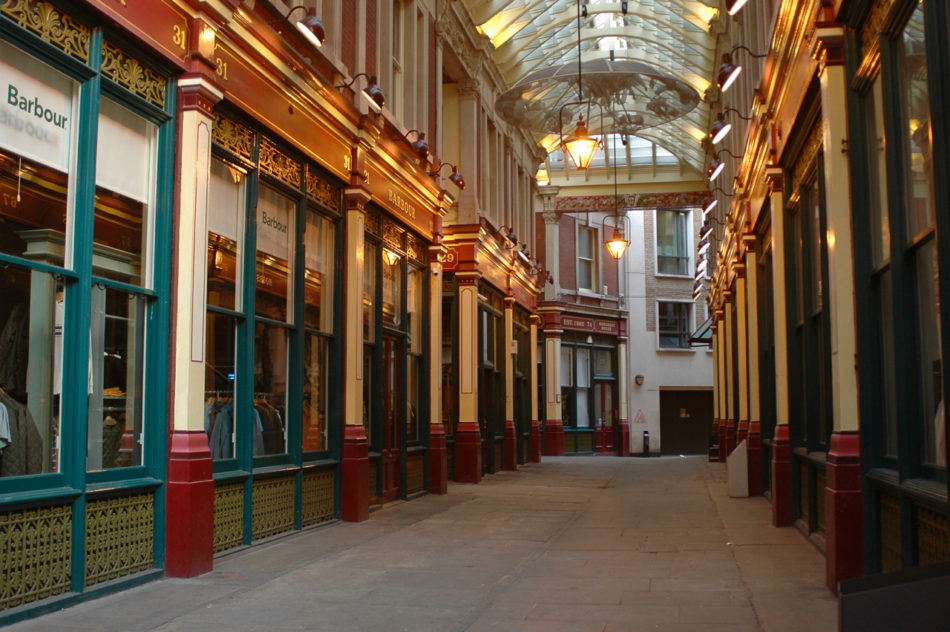 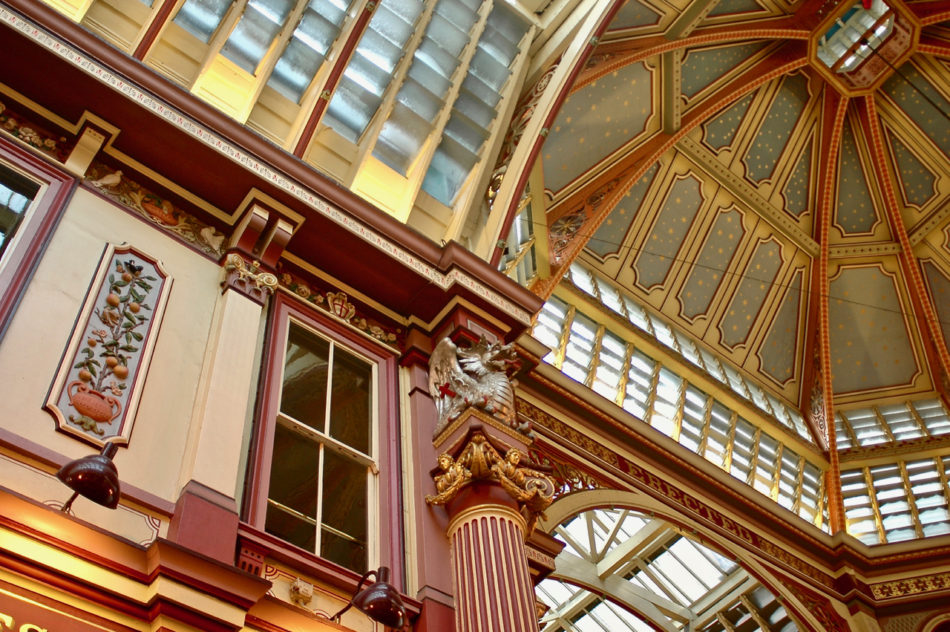 Did you know that if you stand there and do – on an Android phone in English – a Google search for “lumos“, the light of your phone will turn on? And now, 10 points to your house if you answer right: what should you say to turn off the light?!

Next we drove to Islington, where can be found the place that inspired the Blacks’ house at 12 Grimmauld Place. Check out the names of the streets on the way, you’ll see a few that sound very closely like some names used by J.K. Rowling in Harry Potter.

You’ll get off at Kings Cross St. Pancras, giving you the opportunity (especially if you didn’t arrive in London by train) to see the station that was used for the filming. But don’t make any mistake: it’s St. Pancras’ building that has been used to depict Kings Cross. I know, confusing – but you’ll understand why once you see the place! 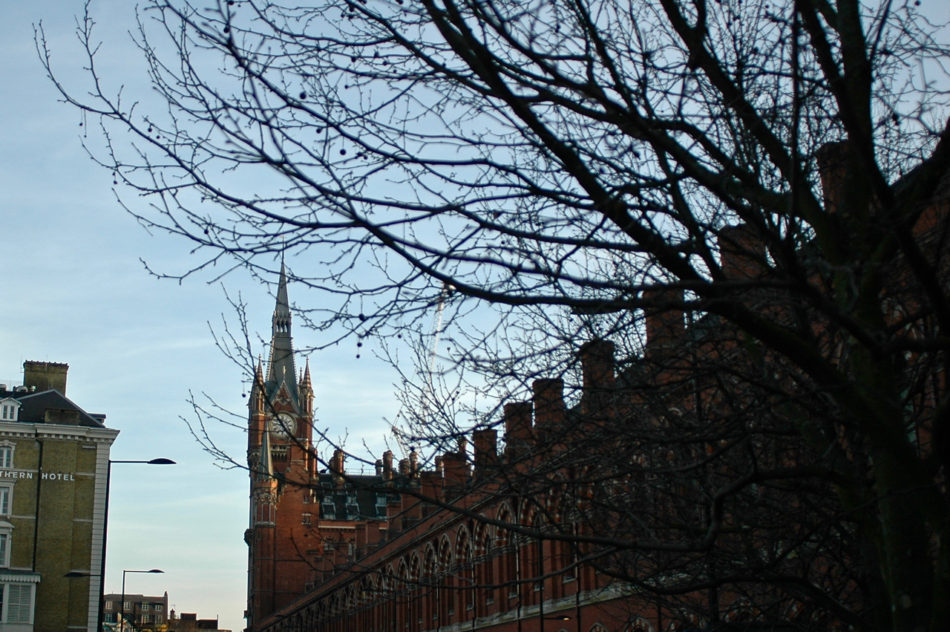 It’s where you’ll have to say goodbye to the great bus tour staff (guides and amazing driver), but it’s not necessarily the end of your tour or of your Harry Potter experience. If you have the time and courage – and only if you don’t go to the Warner Bros Studio later on – you can do the line to get your picture with your cart at Platform 9 3/4. If you’re going to the Studios, don’t bother: there’s a replica (actually, three) over there and it’s much less crowded!! However, going to the Studios or not, check out the shop and try your best not to spend all your galleons!! 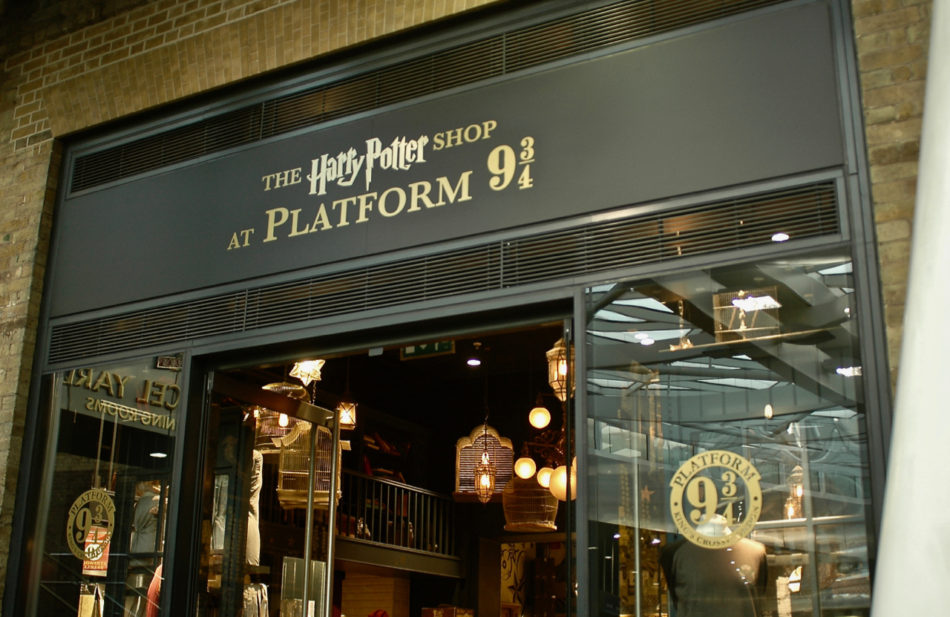 Last word: how really was the Harry Potter bus tour with BritMovieTours?

The big advantage of a Harry Potter bus tour – apart from not getting lost and not losing any time – is that the guides are incredible! They know everything there is to know – especially anecdotes you might not be aware of – and are hilarious! Also the bus tour is great when it’s cold outside. We had a whole Harry Potter weekend planned – and we knew we were going to walk A LOT, so the bus tour really was our best option (especially as it was freezing outside). It was comfortable and we got to see a lot of locations without any hassle!

Note that BritMovieTours also offers a Harry Potter walking tour that we haven’t tested but as this second experience with them has been a great success, we’re pretty sure you can trust them with all of their tours!

We’ve been guests of BritMovieTours for this tour of Harry Potter locations in London, but as always, all opinions are our own.

27 Replies to “Harry Potter Bus Tour in London with BritMovieTours”