On our honeymoon road trip by bus in the US, Boston was one of our first stops, after a couple of weeks in New Jersey and a few days in New York City. We took a bus from NYC to Boston, stayed at a hostel, and went around as much as we could to have a look at Boston and Harvard.

This post may contain affiliate links. If you use one of those links to make a purchase or a reservation, we might earn a small commission, at zero additional cost to you.

Going to Boston from NYC

We took a Megabus from NYC to Boston and even though the bus left and arrived late, the trip was pretty uneventful.

In Boston the weather was beautiful and warm, and the hostel we had booked was only 10 min away from the bus station so that was pretty convenient. We went through Chinatown : the neighborhood was really nice, everybody was out, old people were playing cards or other board games, kids were crying and chasing each others… This really felt like holidays for us !!

We immediately checked-in when we got to HI Boston, room 302, bunkbeds 1 & 2. The hostel was amazing, with a huge lobby with lots of seats and a big screen, cheap pastries including a vegan banana muffin, a laundry room, a big kitchen with free breakfast, a pool table, TVs, computers, wi-fi, etc. The room was nice, we were at the « red » level. When we arrived, our room was empty, and there were several individual but shared bathrooms on our side of the floor, really big and well-equipped.

Click here to book your stay at HI Boston Hostel Eating vegan in Boston at My Thai Vegan Cafe

As always, we were starving, so we went for lunch (even though it was 4:30pm already) in a thai vegan restaurant that we had spotted on our way to the hostel : My Thai Vegan Cafe. That place is not unlike Simone’s favorite vegan restaurant in Paris : you can have dishes with « vegan-chicken », « vegan-beef », « vegan-shrimp », etc. It is of course totally vegan and delicious!!

As we know going to Boston we wouldn’t have a lot of time to visit much, we still took the time to walk around the city, a new contrast from what we had seen so far. The city is very nice, and shared equally by high glass towers and low old stone or brick buildings. It’s quite impressive and reminded me a little of Brisbane in Australia (as New York made me think of Sidney). Culture is obviously very important in this (touristic) city : there’s a “literary” part, celtic origins are shown with pride, and the historical paths telling the story of Boston are showed by signs all around the city. There is also a “Little Italy“, which was sometimes really fun for Simone, especially with this kind of street name : 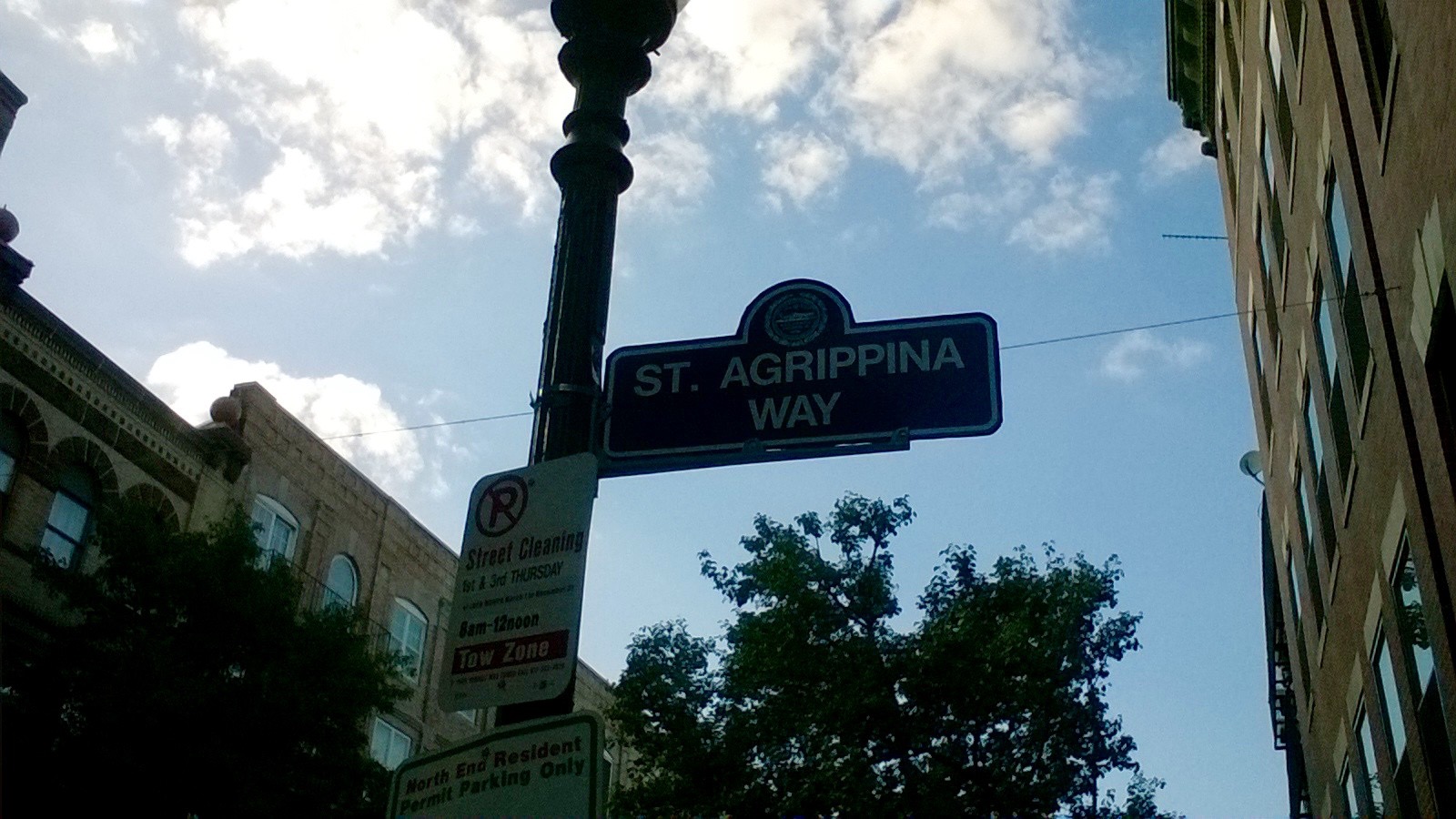 Our walk took us all the way to the pier, Christopher Colombus Park and back up to Faneuil Hall Market Place where there are lots of shops and restaurants, as well as table to play chess or paint for free under the sun! One of the things that are hard to keep on track while on a long road trip is doing yoga on the go. So we had a look on Internet and found a free yoga class taking place in downtown Boston, on the grass.

We were half a dozen people, and they provided mats for free. I talked a bit with the teacher to understand what kind of yoga we were going to do, and then the class started with a meditation and then rather slowly with the postures. I tried to stay in the practice as much as I could but between the different language and the fact that I wasn’t used to her teaching style made it a bit difficult at first.  But then the practice started to be more fluid and active and it was impossible to think about something else than the flow! In the end, it was a pretty good and satisfying class and both Simone and I had a great time! We were well exhausted and felt much lighter afterwards! Then we went back to the hostel, took a quick shower, a vegan takeaway for only $9.75 (50% discount, yay!) for two just beside the thai restaurant, then train to Cambridge to visit Harvard University.

When we came back from Harvard University, I was lounging at the hostel when I suddenly felt that the skin of my shoulder kind of hurt, so I took a look at the mirror and saw that I had gotten an awful sunburnt! According to the shape of it, it had been during yoga. Which totally makes sense because we spent our time basically bending, our shoulders, arms and back at the mercy of the burning sun, and didn’t even think about wearing any sunscreen (which we didn’t have anyway)! So don’t be like me and don’t forget to pack and use a good sunscreen.

Baseball match in a Boston Pub

A bit later, we decided to eat out and found a pub where they had a veggie burger I could eat, and Simone had the salad he desperately needed. They showed games on screens so Simone tried to explain me some of the baseball rules but I didn’t understand a thing so we both gave up, waiting rather for the moment we would go see a match so maybe I could get one or two things – if I didn’t fall asleep in the middle of these apparently forever long games… On our last day in Boston I decided to do a bit of shopping while Simone watched a soccer game between Italy and Germany in a pub. We first walked to the center of the city, which was very crowded with tourists, and then I went to Macy’s to get myself some jeans. Going from Boston to Detroit by plane

We got back to the hostel after Italy lost (and most of the Americans in the pub were for Germany so… yeah…), got our bags from the lockers and got ready to leave for Detroit at 9:05pm.
As Simone had told me the night before, the airport was only 49min away from the hostel by feet. So it was no surprise that it was so fast to go by public transportations. We had a 10 min walk to the same station we had arrived from, then a quick bus ride to our terminal. We had received a few emails from the company we were flying with, Spirit, warning us to be very early (“at least 2hours early for domestic flights”) because of long TSA lines. But we did not experience that at all! In less than 15min our bags were checked-in, TSA and security controls were passed and we were sitting at the foodcourt with some spaghettis in front of us. Going to Boston : Yay or Nay?

Our opinion : Boston is super chilled, laid-back, we loved it. It’s definitely a cool town, very relaxing and yet very welcoming and active without being overwhelmingly so.