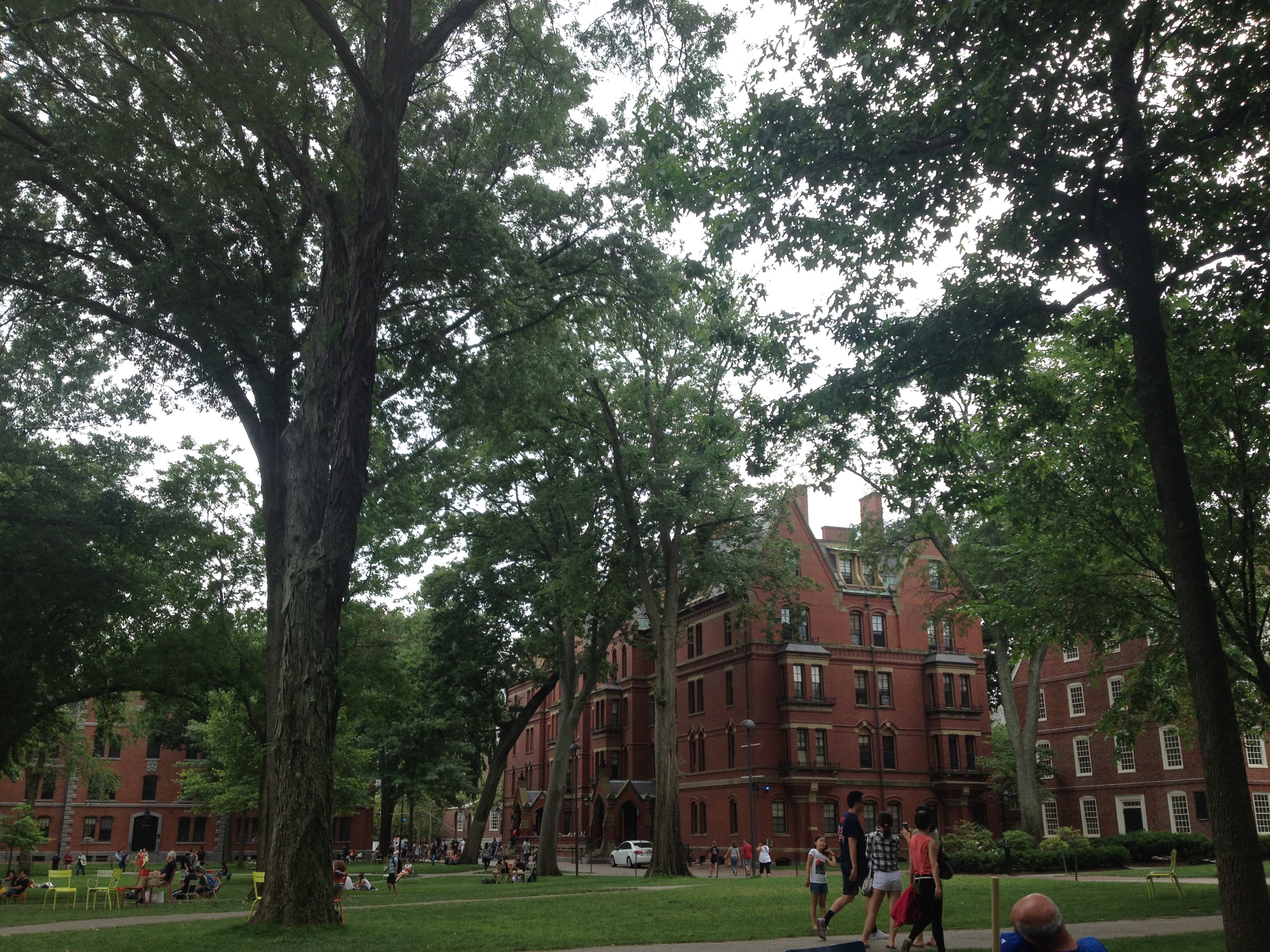 This post has been brought to you by Simone, Alice’s commentaries added in italics

So I totally forgot what we did! oh, no wait :

12:15 Yoga at the park and Alice can almost touch the ground with her head, too many warrior positions, lots of sun!!!
This was pretty cool. We went to a free class of yoga in the center of the city, on some grass. We were half a dozen people, and they provided mats for free. I talked a bit with the teacher to understand what kind of yoga we were going to do, and she told me she wanted to go teach in Europe or Australia. The class started with a meditation and then rather slowly with the postures. I tried to stay in the practice as much as I could but between the different language (sometimes it is hard to understand what is said when you’re outside and your head is upside down and your butt towards the sky! and the fact that I didn’t find her teaching as good as the one I was used to made it hard. But then the practice started to be more fluid and active and it was impossible to think about something else! I never went through so many Warriors postures for so long, and the Warrior 3 was particularly challenging for everybody. In the end, it was a pretty good and satisfying class and both Simone and I had a great time! We were well exhausted and felt much lighter afterwards! 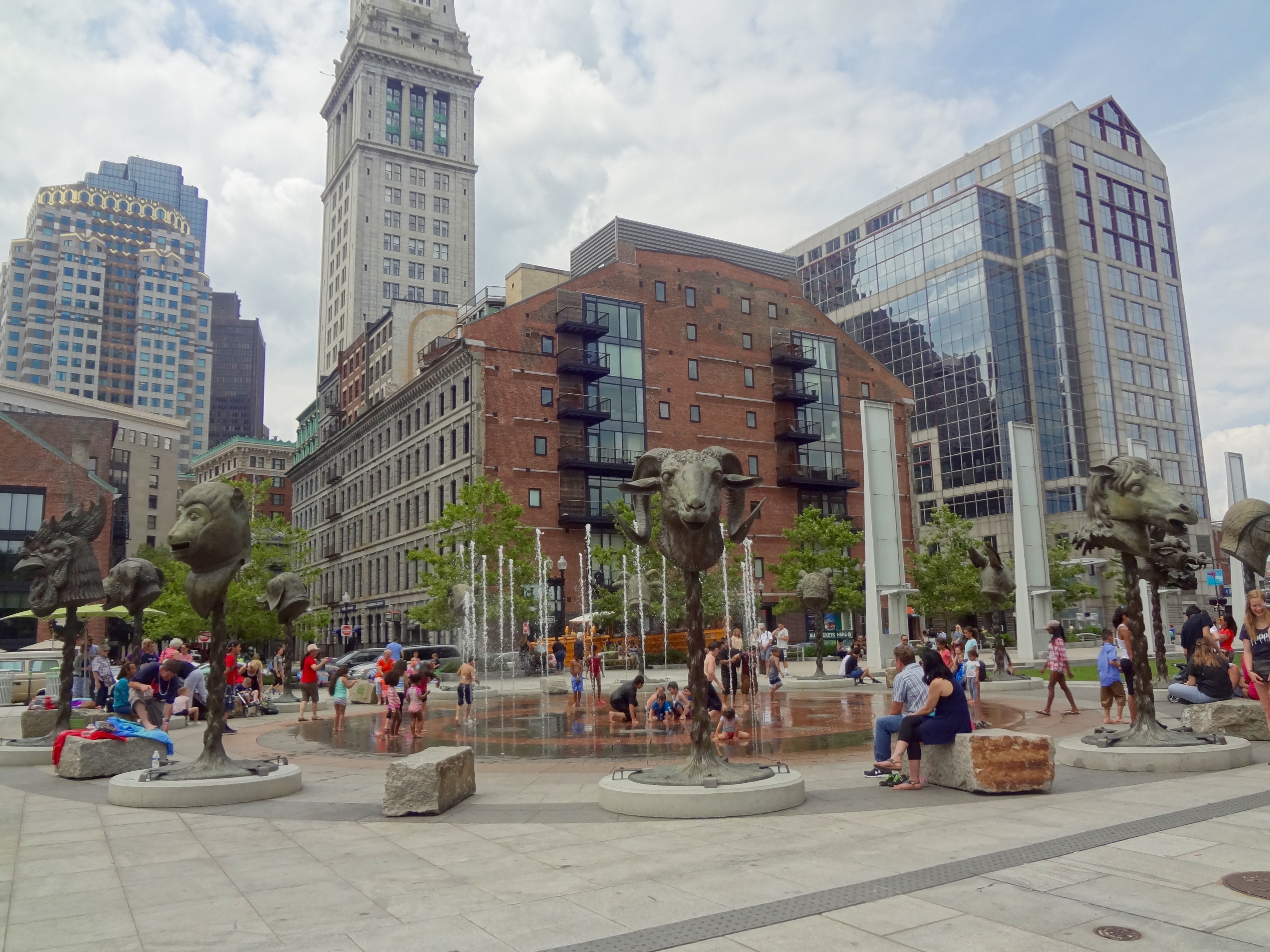 We went back to the hostel, took a quick shower, vegan takeaway for only $9.75 for two, then train to Cambridge to check out Harvard University.
The vegan takeaway was taken just beside the vegan thai restaurant we went to the day before. Therefore it was vegan thai takeaway, and pretty awesome. They had a « special discount » today, which was « Take one, get the other one with 50% discount », which made it our cheapest complete meal of the trip so far !!!!

We ate the first part of the meal on the train then finally finished it comfortably on the campus of Harvard University.

Are you in love with the beautiful American universities? Check out the Top 7 of the Universities we’ve visited when we were in the States!

Afternoon at Harvard University in Cambridge

The campus was probably more beautiful and nice than Columbia and NYU combined. It was a nice convergence of red bricks and green grass, and there were chairs free to use on the grass. People were taking tours of the campus, some were students of the Summer School, and some others just relaxed on the grass while taking advantage of the free wi-fi, reading or sleeping!

We relaxed and took pictures and walked again too much just to find 1253 Massachusetts Street which was right in front of us!!!
We first took a stroll around the campus, which was really nice, then we (I) wanted to stop by the shop to get yet another university shirt. But we couldn’t find the right number on the street, went the wrong way to find it, took a walk around the other part of the campus, took more pictures, took a wrong street, followed by another one, were amazed at the « village-likeness » of the city of Cambridge (and felt that it was more Cambridge in Harvard than the contrary!-, and finally found the shop who was just a few meters away from where we first started to look for it but on the wrong side. Well, that was the Bookstore, but unlike Columbia, the Bookstore* doesn’t sell the shirts. So we had to go a few meters further, to the ShirtStore, which is where we were at the beginning. I am forever thankful for the fact that I have a very resilient husband.

We bought the shirt, made yet another one of our « Starbucks stops », and found a place where they sold international stamps. We got 28 so we’re pretty sure we won’t have to find another place that sells them.
Then we got back to the hostel where we relaxed after meeting « Gunther » Alex, our new roommate.
No idea what was really his name, totally forgot, but that suits him perfectly.

While we were relaxing I suddenly felt that the skin of my shoulder kind of hurt, so I took a look at the mirror and saw that I had gotten an awful sunburnt!. According to the shape of it, it had been during yoga. Which totally makes sense because we spent our time basically bending, our shoulders, arms and back at the mercy of the burning sun, and didn’t even think about wearing any sunscreen (which we didn’t have anyway), so it was decided that even though my body and strength had both abandoned me, we would go searching for sunscreen and Aloe Vera cream together, and then Simone would go find some food to cook.

We bought sunscreen, and then had dinner with a veggie burger for Alice, and a salad for me.
As expected, we didn’t find any grocery store for food after the pharmacy stop, everything was closed! We were really physically tired so we didn’t want to walk around forever but we couldn’t stomach asian food anymore. So we finally found a pub where they had a veggie burger I could eat, and Simone had the salad he desperately needed. They showed games on screens so Simone tried to explain me some of the baseball rules but I didn’t understand a thing so we both gave up, waiting rather for the moment we would go see a match so maybe I could get one or two things – if I didn’t fall asleep in the middle of these apparently forever long games…

It was raining and we got wet on our way back.
And indeed we did. It was pouring rain when we got out of the bar and we just wanted to sleep so we hurried back to the hostel, me in my long dress and Simone and I walking on flip-flops (which, as everybody knows, are the perfect rain shoes).

We took a shower when we arrived at the hostel and relaxed in the lounge part. When Alice was finally done working for the day, we watched some episodes of the Ritals together on Youtube before going to sleep !!
The Ritals is a Webseries on Youtube, picturing two Italian men living in Paris and their struggles and adventures as Italians in Paris. Every episode is more or less 5minutes and highly hilarious. Simone found it and watched a few episodes when I was working and he was laughing so he promised to show me when I’d be done for the night. We were laughing so hard…!! You will find the most hilarious of their episode here in a couple of posts (and it’s only for those who understand French or Italian, no english subs unfortunately) but if you can’t wait, here’s their Facebook page  (by the way, have you thought about liking our own Facebook page ? It would make our day!!) And it also made me understand some things about Simone so it was very entertaining and interesting. It was the perfect thing to watch just before going to bed.

*At the Harvard BookStore we found the curious yet amazing book-making robot that I would have loved to use ! Here’s everything about it : Custom-printing.