Eating Vegan in Rome: How to survive traditional restaurants as a vegan

Being married to an Italian and being vegan, I’ve had to navigate the world of “what the hell am I going to eat?” a few times in Rome already. The first time we went together to visit friends and family, I had no idea if eating vegan in Rome would be easy or not. Now I know that if you’re vegan, Rome is a perfectly good destination for you with a fair amount of vegan places. With that being said, there’s also no reason why you shouldn’t be able to enjoy the more traditional places, and you should have no problem finding anywhere vegan pasta in Rome.
There’s just a few things you need to know about ordering vegan food in traditional places. Then, you’ll be able to eat delicious vegan pizza and vegan risotto in Rome in the blink of an eye! 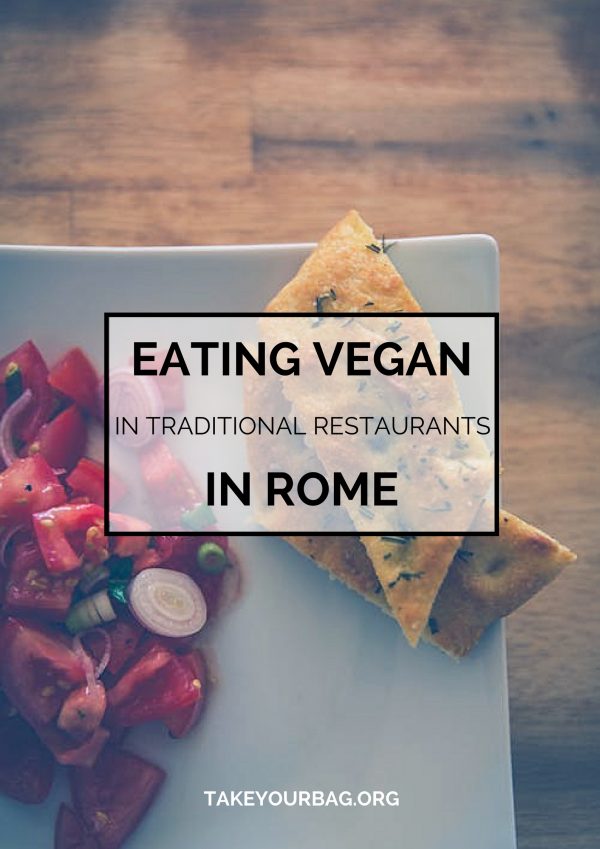 I’m going to reassure you right now, eating vegan in Rome does include eating pasta! Every restaurant will always be able to make you a dish of pasta al’ pomodoro (= with tomato) or pasta aglio, olio e peperoncino (with garlic and red pepper), which are both perfectly vegan. To be honest, there’s a lot of pasta dishes that can be vegan, just be sure to ask the waiter to have them senza formaggio : without cheese.
But not all pasta are created equal and you have to stir away from the damned things made with eggs. That is : fetuccine, and tagliatelle. Other than that, you should be fine and be able to eat a scandalous amount of vegan pasta in Rome! 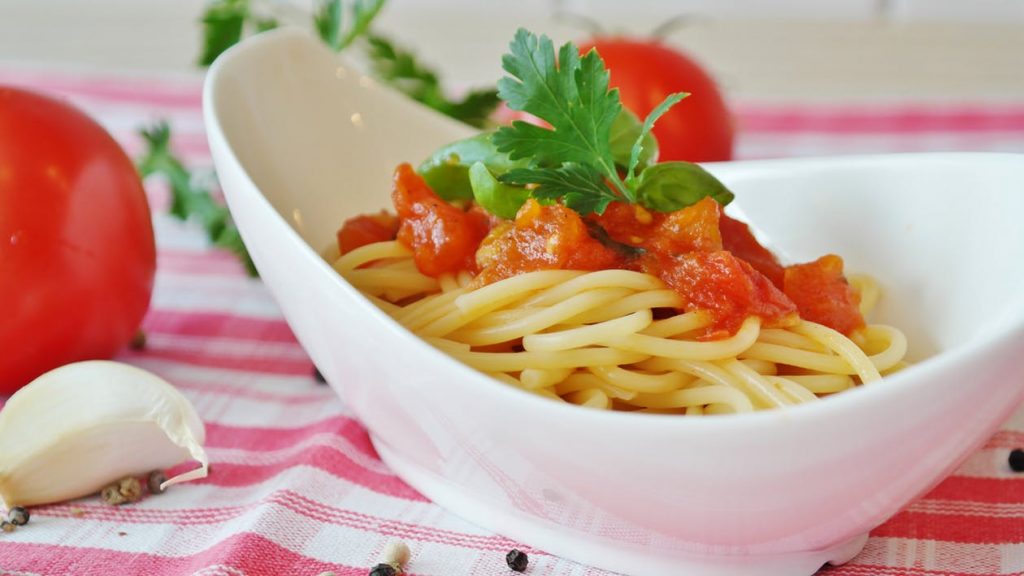 If you want to try a traditional risotto, you have to make sure that it can be made vegan. In general, risotto is made with a non-vegan broth and also with butter. So you have to make sure that none of those are used while making it, or can be replaced just for you by vegetable broth and margarine or just oil. There’s a good chance the chef will accept to make you a vegan risotto, don’t hesitate to ask!

How to order a vegan pizza in Rome 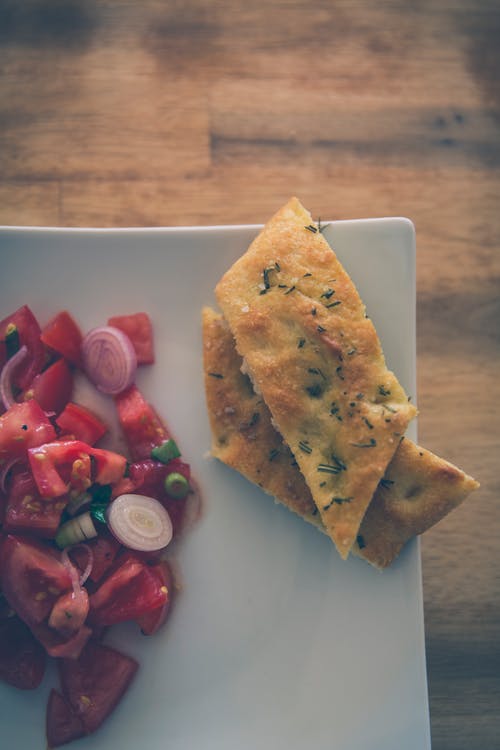 If there’s one thing you should be eating at least once a day in Italy (I know I do), it’s pizza. The moment you feel hunger creeping on you while you’re roaming the streets and gaping at their beauty, you should rush to the nearest stall where you can get away with a piece of pizza. I’m serious, do it. I know the pain is real when you’re stuffing yourself so much your stomach hates you, but that’s what you go to Italy for. So power up and go get yourself some pizza.
The good news?
Ordering a vegan pizza in Rome can be very easy: there’s at least three options that will always be the right amount of perfectly vegan and atrociously delicious : la bianca, la rossa (the white, and the red), and the marinara (just tomato sauce). And now, more often that not, you’ll be able to get away with a vegan pizza with maybe spinach, mushrooms, or artichokes… Just make sure you double check which ones are cheese-free!

Pesto is another god-sent delicacy that you might want to be lathering on your pasta. But keep in mind that there might be parmigiano (parmesan) used in its making, so be sure to ask your waiter.

Splurge on vegan gelato in Rome

The safest – and, to me, the most delicious – bet when it comes to gelato (ice cream) is to go with lemon sorbet. It’s dairy free and oh so delizioso. But if you want another flavour, ask! You will probably be able to get another fruity sorbet, and now some other and more surprising flavours can be dairy-free and therefore allow you to taste the yummiest vegan gelato in Rome! 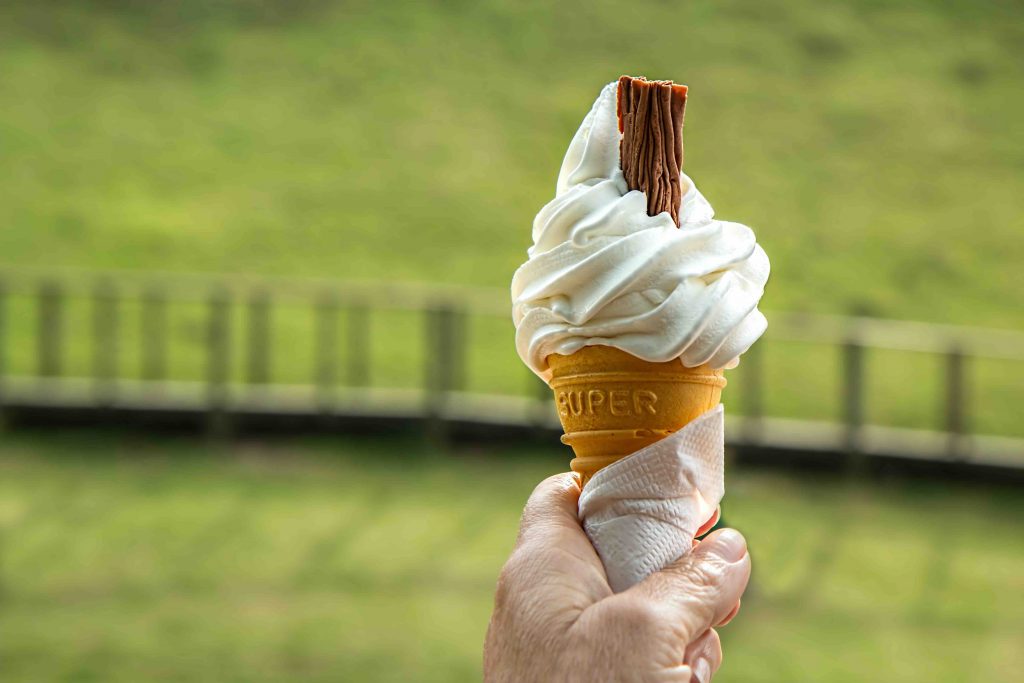 Is there more vegan food in Rome?

If you manage to eat vegan pasta, risotto, pizza and gelato in Rome, you made it halfway to the perfect traditional and vegan Italian food experience. There are a couple other things you shouldn’t miss that are perfectly vegan.
–Artichoke in any form. Grilled, fried,… JUST EAT IT. (Just be sure that no egg was used in the breadcrumb coating process. If it’s called carcioffi alla romana, you’re good!! (You can thank me later)
–Bruschetta al pomodoro. Tomatoes on a toast? Don’t be insulting, this is so much more. Simple, but delicious and – be careful – addicting!
–Panzanella. Because it’s made with stale bread soaked in water, it’s a pretty popular dish in poor households. I am personally addicted to it and used to harass Simone 24/7 so he would make me some when we were in Paris (our bread consumption has drastically changed since we’re traveling around). By itself it’s a vegan dish (it’s bread, tomatoes, olive oil, vinegar, salt, pepper, basil) and delicious, but non-vegan ingredients are sometimes added so just make sure to ask for the cook to keep it vegan. 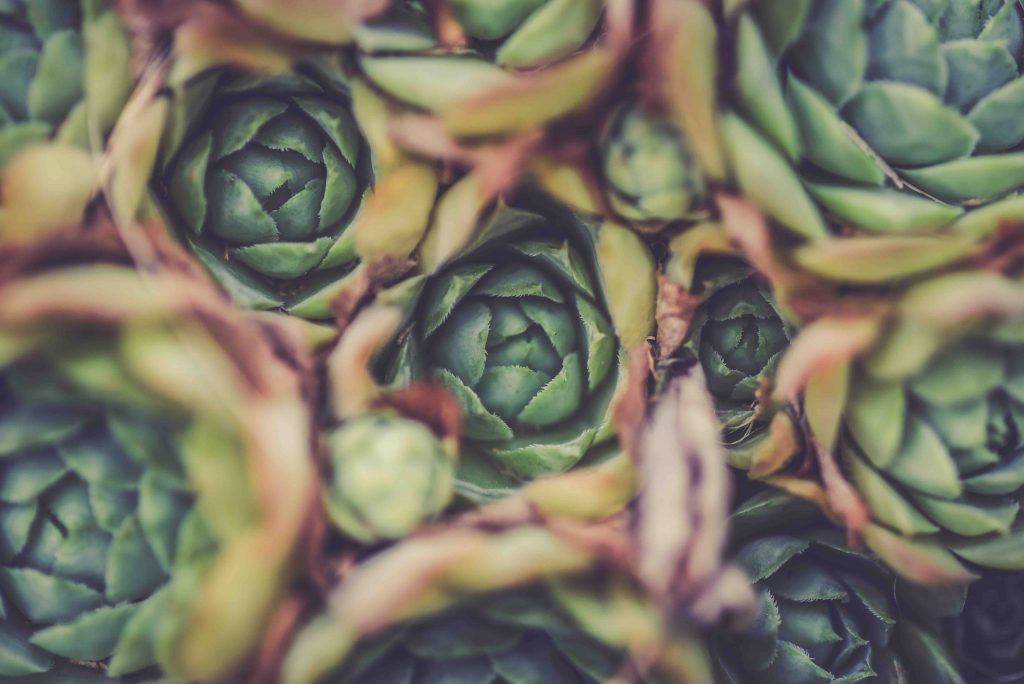 I know this is about eating vegan in Rome, but what about drinking?!

–Coffee. Take an espresso. You’ll need the energy to walk all day, and then you’ll need it to digest all these vegan pasta dishes!!!
–Wine. As a French, it pains me to say it, but Italian wines are the real deal. You might as well enjoy them here where they are a fraction of what they cost you in your own country.
–Digestives. Because Italians are worst than tourists, they stuff themselves with more pasta and pizza and risotto and fried artichokes than you can stand the view of. That’s why they invented such sinfully delicious digestives, for the sole purpose to be able to stand after a meal. My all time favorites are limoncello and amaretto, but you can try the amaro or grappa too! (Drink responsibly and go visit Rome as we recommend, you’ll be fine!) 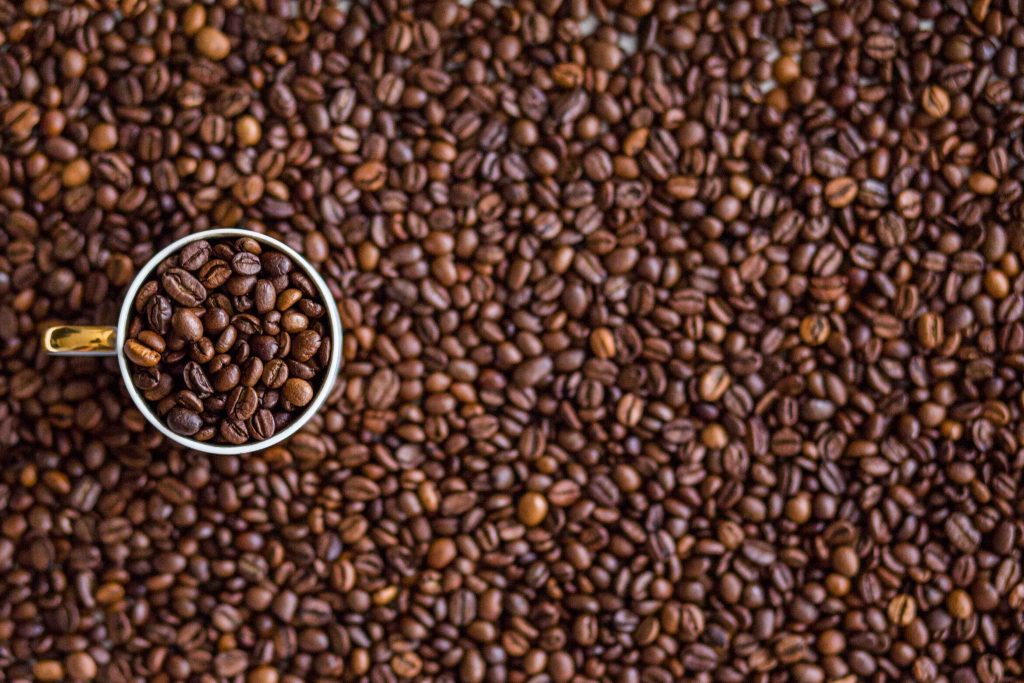 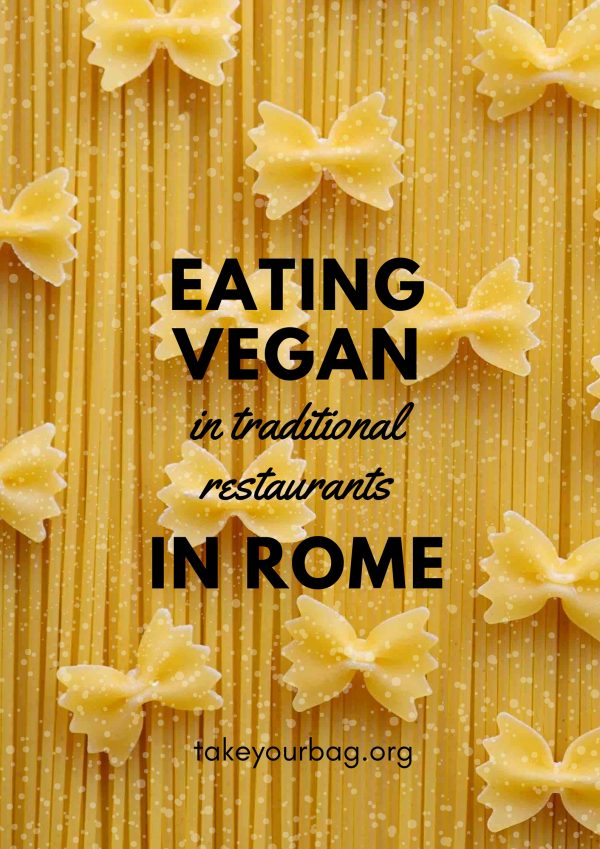 Do you have any question or things to add about eating vegan in Rome? Drop them in the comment box below!

I have never been to Rome, but if I manage to go one day I will stick with the pizza and pasta! 🙂

That’s a good choice, Melanie. I do a lot of that too :p

I can eat vegan style as long as what I am eating tastes like meat.

The beauty of these dished is that they’re vegan without trying. Vegan or not, that’s mostly how people eat them 😉

This is fantastic! I’m not vegan but dairy intolerant and often go vegan options when eating out because it’s much easier than trying to explain my situation. Thanks for your advice, I am hoping to visit Italy next year and wasn’t looking forward to trying to navigate the food culture.. your post helped 🙂

I’m glad it helped! I hope you have an amazing time in Italy!!

Such a great article, and super-useful! After heading to Italy as a vegetarian, I did wonder how you’d travel there as a vegan. I went full vegan this year, so I’m really glad to hear I could potentially go back and it wouldn’t be too hard to find places to eat.

Yes, Italy is quite nice for vegetarian/vegan diets. I’m pretty relieved about that too since I’m married with an Italian and we go back fairly often!

My sister and i went to Tokyo when I was in high school and she was in college. She was vegan and I didn’t eat seafood. You can imagine it was a lot of rice and veggies for that week! 🙂 Looks like you found a way to go beyond the basics!

If you’re ever in Hanoi, Vietnam, there are two bombass vegan spots called Jalus and Uu Dam Chay. SO good! 🙂

We went to Tokyo last winter and it was a bit difficult, that’s true! Thanks for the info! 🙂

Sign me up for the Gelato and Pizza Bianca alone, but you gave us so many other options too. Roma is a great gastronomic destination and the ingredients are what make the food so damn delicious, Vegan or not. YUM!

Yeeees! The Bianca is so good, I eat it for breakfast!!

I’ve recently started being a vegan, after being vegetarian for many years and it’s reassuring to know that you can eat healthy and delicious vegan meals in the eternal city!

I can’t wait to go back.

I’m so glad it can be helpful for you! We will always find ways to stuff ourselves in Italy!!!
Je t’en prie <3
Ciao, baci baci!

It looks there are delicious Vegetarian options to try! Your pictures are mouth-watering too! 🙂

Yes, there are tons of vegetarian/vegan options to try, way more than just the ones in the article, actually! Pictures are stock, glad you like them 😉