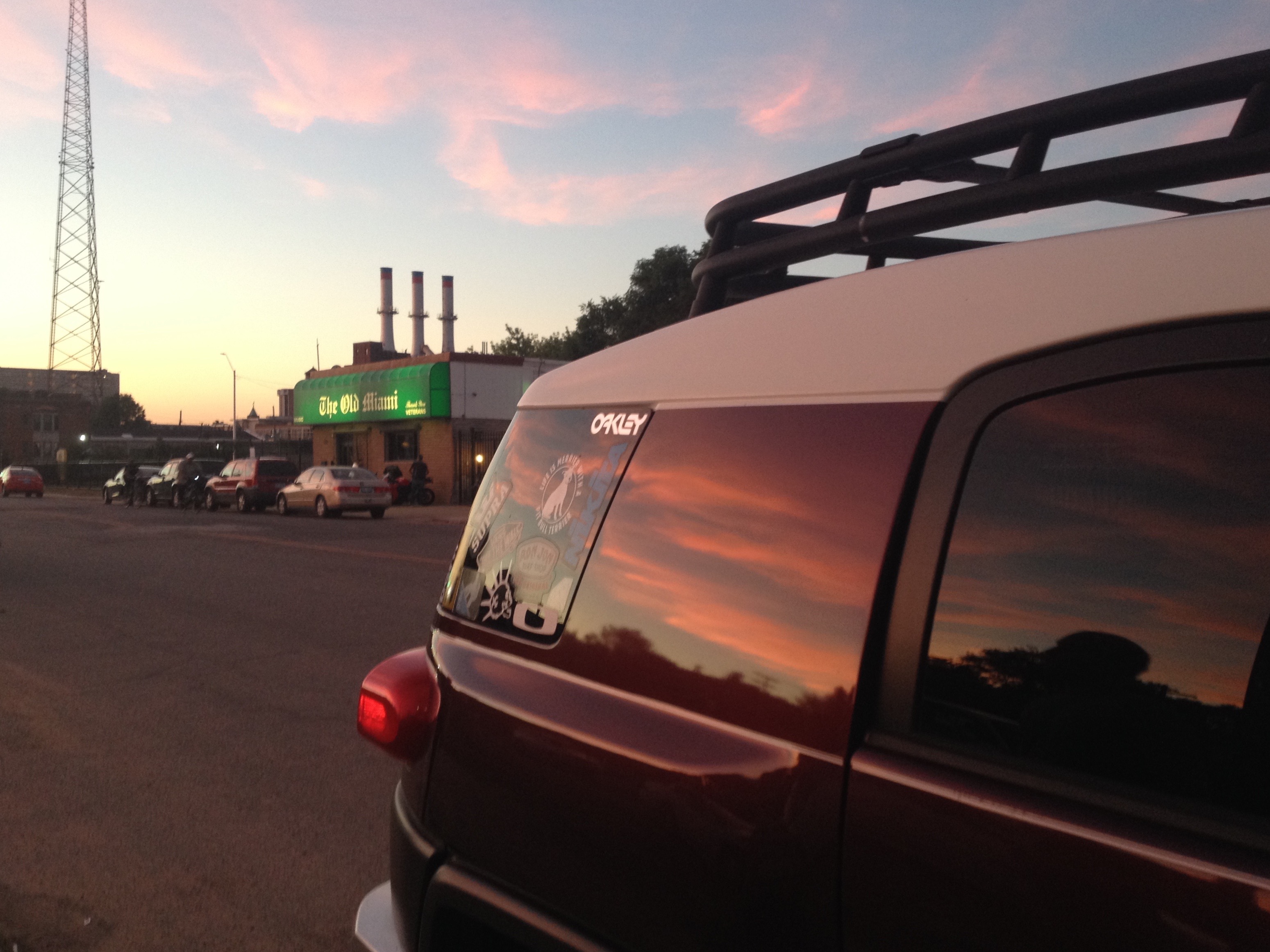 I woke up and had coffee while Alice stayed in bed late. Then we went to have a late brunch at “The Brooklyn Street Local“, a vegan friendly place. I had Poutine & scrambled “eggs” (vegan).
Simone usually has vegan food when he can so we can share. This time was no different and it was delicious! (I mean I didn’t like hisÂ Poutine, but I loved my vegan breakfast!).Â I love how you can have the sense of real scrambled eggs but with tofu or tempeh…Â

After breakfast we went to Detroit Beach in a State Park where we did not pay to enter. We took a swim andÂ talked about politics before getting back home.

The beach is located inside a State Park where you should have a badge on your car (or pay for one) when you enter, but we managed to get through without it (which is bad, but so are we). It is on a man-made island, and the sand is bordered on one side by the park, on the other by the river, so it’s not salted water. When swimming, you’re not faced by the horizon and the never-ending ocean, but by a series of tall buildings, which is a peculiar experience. The weather was relatively hot so the water wasn’t too cold and we enjoyed spending time on the beach to read and talk about world and American politics all together. Victoria and Hans both know a lot of things about politics, and about their city, which made it very interesting and stimulating for us. We had a great time.

After resting and working at home a bit, it was time to have fun :

We went out at Old Miami bar where we played pool, darts, arcade golf and pinballâ€¦

We had lots of fun and Victoria & Hans basically destroyed us at every game we played…!!! Simone also really enjoyed putting songs on the Jukebox!

There was a picture of Sixto Rodriguez in the bar. He is a super important musical icon :
He was born in Detroit, and his career initially proved short lived. But, unknown to Rodriguez, his album became extremely successful and influential in South Africa where some of his songs served as anti-Apartheid anthems. If you’re interested, the 2012 Academy Award winning documentary Â  “Searching for Sugar Man“explains it all*.

We were starving after all of this gaming, so we got a late dinner at Honest Johnâ€™s, real Â«Â soulfulÂ Â» cuisine. Chicken fingers & waffles for me, and veggie black bean burger for Alice.

It was also the occasion for another game : Scopa. It is an Italian game that Victoria enjoys that is played with a special deck of card (that I had never seen in my life). We had fun and I won!Â

Back at home, we watched the Ritals in bed andÂ laughed to the point that we almost couldnâ€™t stop to Â«Â il FormaggioÂ Â» episode [sorry, no english sub] :

*Incidentally, I have watched this documentary totally by chance when I was in Stockholm with my friend Anne-Charlotte!