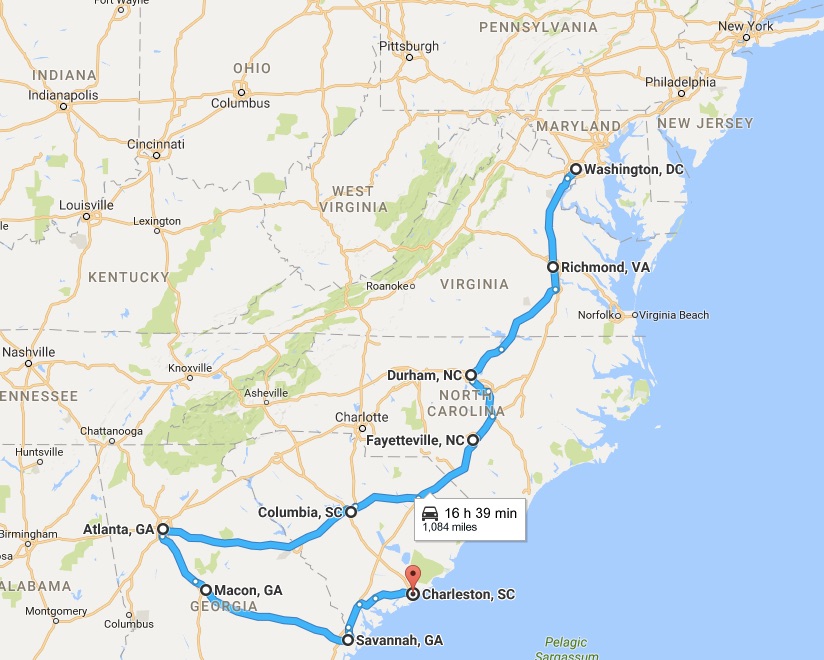 The whole bus ride from Washington DC to Charleston

After spending the last three days around Washington DC and Alice losing her credit card at the station, it was time for our long bus ride from Washington DC to Charleston.

The first leg of the trip, from Washington DC to Atlanta, was the perfect moment to relax, listen to music and reflect on what we’ve been doing so far.

This leg of our trip passed through 5 states : D.C., Virginia, North Carolina, South Carolina and Georgia. It was roughly 730 miles and took 13hrs (with stops): from 8pm to 9am.

when traveling is hard but good

As usual, a perfect soundtrack on a night trip makes my mind fly…. My thoughts are great, big, hopeful. I just see good things even if I know we’ll go through struggle and hard times…. Travelling without a home is not always easy, there are those few times when you wish to sit your ass on a comfortable chair watching meaningless shows on tv, eating your very well home-cooked dinner or a super gourmet delivery.
We are tired, but after almost 6000 km and the double more to go, I think it’s normal! Tired, but ready to enjoy all that this beautiful trip is giving us: faces, situations, rain, heat, people, the moon and the sun…..etc…

few words on the people we met

These people that opened their houses to us…. They gave us the unexpected. People are GREAT !

Breakfast at the marriott in Atlanta

We arrived in Atlanta around 9h30 and it was already pretty hot outside. It promised a day of heat and struggles for our tired bodies and mind. But we had a plan: find somewhere to have breakfast and relax, and then go to the movies to pass the time.
Atlanta might have good things to offer, but we weren’t interested to see it during this trip. All we wanted was to waste as little energy as possible to have some strength when we’d finally get to Charleston.

As usual, we found our way to the nearest Starbucks, which was located in the Marriott Hotel. This place is quite incredible, I felt as if I were in a dystopian movie (see the picture below)! We took our time and, on top of our breakfast drinks, drank 3L of water, ate 3 bananas and lots of cherries to make our food bag lighter… Also Simone once again earned the title of Bestest in the World when he asked the hotel staff if they could keep our bags for the day. And they did ! They just let us put it in storage as if we were guests. Perfect !

the beginning of a tradition: movies in transit – and a broken camera

Now lighter, we felt ready to leave the comfort of the hotel to go watch a movie. Hopefully, the day would pass faster that way.
The way to the Imax wasn’t an easy one, though. As we wanted to watch Ghost Busters it was imperative we went there, no closer cinema was showing it… We were pretty far from it so we had to take the Metro. But Simone’s credit card was not working at the machines, so we went to get cash. Then finally when we got to the destination station, we still had to walk to the cinema. For 20 min. Under outrageous heat. Great !!!

Even better? I broke my camera !! After losing my credit card the previous day, that felt like a pretty heavy blow. I felt pretty discouraged and sad and I realized that I might be even more tired than I thought I was. But if the universe was trying to tell me something, could it do it in a cheaper way ?!!

Even with my mood pretty low and my tiredness pretty high, I had to acknowledge that the part of the town close to the cinema was pretty nice! It was like a village enclosed in a little square of streets, I liked it. It felt cozy.
We went to watch Ghost Busters, in 2D. I was pretty adamant on seeing this movie, especially after all the sexist backlash it got from the start of the project. I was determined to like it. But… I didn’t really. I was expecting a remake of the original movie but instead, I felt that I only got stupid jokes and no substance, no scare, nothing. Simone found it funny, and I found it boring. I was quite disappointed.

We found the Free Shuttle to get back to the Metro so that was pretty cool! No need to walk in the heat anymore!
As we were, as usual, starving, we tried to find a place to eat. Everything was either expensive or not appealing, so we settled for the Hard Rock Café. It brought us memories of our second trip together (but first as a couple): to Copenhagen. It’s always nice to bring memories back! We were quite happy with our huge burgers and delicious onion rings. But the waiter was annoying, to say the least, with bad jokes and being ever more intrusive. It didn’t spoil our dinner, though.

After eating we went back to Marriott to get our bags before getting to the bus stop. It was a different location from the one we came from, switching from Megabus to Greyhound. Not a good swap in our opinion, as Greyhound is highly disorganized and made us both check our bags in person even with both tickets.
The driver was a pretty badass woman though so I liked that!

During this leg of the trip, we only traveled through one state: Georgia. But as you can see, we were going more south than Charleston, our ultimate destination, is. You can see that we did a big detour… Actually, we couldn’t find a better way to go from Washington to Charleston as cheap or cheaper. This part was 250 miles and 5hrs long…

Lost in the middle of Georgia

Not really but let’s pretend we are.

Savannah Greyhound station at 2:30am is an interesting 5 hours rest point. There is nothing to do, just realizing… how many kids do these people have?? 5/6!! There is no wifi and lots of light so it’s hard to sleep.
Alice is reading Game of Thrones explaining to me Â and to the entire world [SPOILER ALERT] that Jon Snow is Denarius Stamborne [Daenerys Stormborn, ahem] (I’ve really no idea on how it’s written but who cares, I mean come on, what kind of a name is that?) cousin, while eating chewing gum like avocado maki (she’s addicted to avocado maki, apparently to chewing gum too!!!)…..
Me I’m just thinking of a delicious dish of pasta…. I really want to roll my fork into a 200 grams spaghetti or bucatini al dente with any kind of well-cooked sauce!

Now I’m listening to Bruce Springsteen’s “New York Serenade” and I would really love to see him live in his hometown Asbury Park.

“Adagio for Tron legacy” by Daft Punk… the 7 persons in the room are sleeping, finally Alice gets a bit of rest, I slept in the bus…..
Probably around 5 I will Start to collapse, I just hope that our trip in the bus to Charleston will be less cold…..

“Another world” by Chemical Brothers”. Yes, my playlist is definitely taking an electro turn!

The last part of our trip went from Georgia to South Carolina. It represents around 100 miles and 2 hrs of bus. I have circled the city of Columbia, a city we passed through when we went from Washington to Atlanta. Now that I think of it, taking a bus from Columbia to Charleston might have saved us a lot of time, strength, and money. But neither of us realized that before today. No regrets! But you might want to do that instead of what we did!

back on the road

At 6h30, we were back on the road. The bus was from a partner company, which finally had wifi. I used it to check a few things before nodding off for the next 2 hours. Simone didn’t really get any sleep…

Our bodies and mind were exhausted from this bus ride from Washington DC to Charleston. We were wondering how the first day of two in Charleston was going to be!

18 Replies to “Bus ride from Washington DC to Charleston : on the road”