If you’re wondering if Paris is a vegan-friendly place, the answer is yes.  There are more and more  vegan restaurants in Paris, as well as vegan-friendly ones, and practically all chain supermarkets (Monoprix, Franprix, Carrefour,…) offer vegan options for your groceries. But you can also check out one of the many organic food shops (Naturalia, Biocoop, le retour à la terre,…) that we have. If you still might have issues finding vegan options in classic restaurants and bistros, you won’t be left with nowhere to eat at, I promise!
Of course being a local and vegan for the 4 last years I’ve lived in Paris, I had ample opportunities to find out the best places to eat great vegan food in Paris with best value for money, so here’s my pick, see you there!

There are a decent number of vegan restaurants in Paris, and I’ve come to be a regular customer at some of them, thanks to their amazing food and great locations. So if you want to grab a slice of vegan pizza or a vegan burger in Paris, Asian food or maybe get a snack or even go on a classy diner free-of-meat, follow my lead.
Check further down if vegan-friendly is fine for you and you’d like to eat brunch, have a French bistro experience or make your palate happy with Indian or African food.

If you only eat one vegan burger in Paris, go to the Marais, where Hank Burger is located. With 5 burgers on the menu, they offer excellent quality and creativity. Don’t hesitate to take the full menu, I can safely assure you that the fries are as yummy as the coleslaw so pick one, and don’t forget to have one of their organic drinks, including cola.
The place is a bit small (and victim of its own success) so it can be rather crowded and cramped, but trust me, it’s totally worth it. They can also make the burgers gluten-free.

Order: La Catcheuse, made with mustard sauce and alfalfa.
Where? Le Marais – 55 rue des Archives
They also recently opened a place I haven’t tested in the North of Paris: 8 rue Rochechouart
Website: https://www.hankrestaurant.com/
$

Just a few streets away from Hank Burger is their pizza counterpart. As for the burgers, they make vegan pizza taste scandalously delicious. The toppings are insane, varied, and extremely tasty. They’re also pretty filling so I would recommend you start by ordering two slices and one of their yummy home made desserts like their cookies (they usually make galette when it’s the season, don’t miss it if it’s on!!!). As the burgers, the pizza slices can also be made gluten-free. 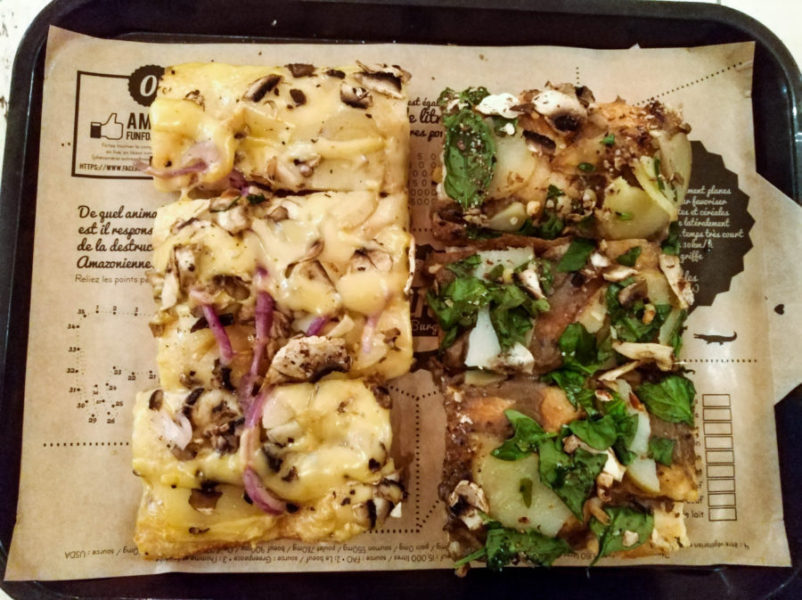 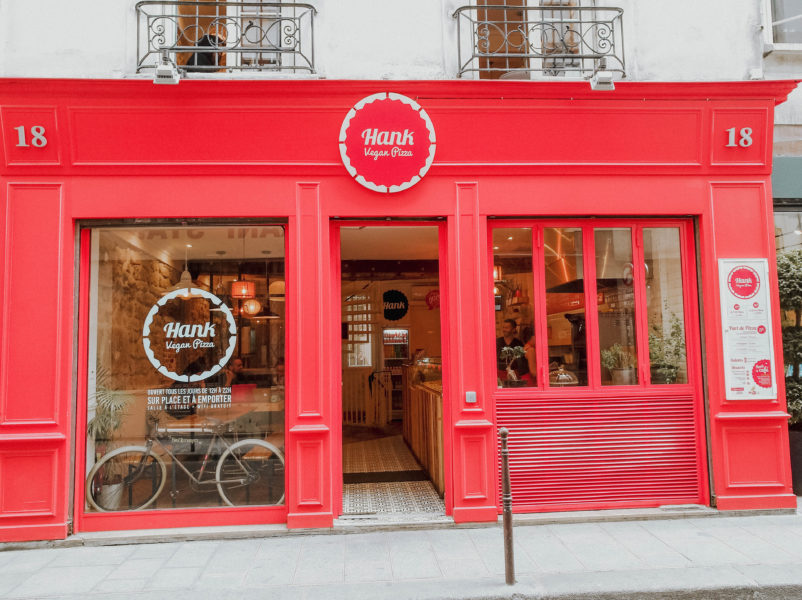 Related: If you’re craving Italian food in Paris, the guide to eating vegan in Rome works for any other city as well.
I tell you what to order and how to order it!

Tien Hiang is hands down Simone’s favorite restaurant in Paris. This Asian vegetal canteen offers typical dishes made with soy protein imitation meat (so, vegan) that will fool you so much you might wonder! It’s incredibly tasty and the portions are generous. The restaurant just went through a renovation and opened back mid-September, so you’ll see their new settings. It’s definitely too small for how popular it is, so come early or expect to wait for a bit.
There is one vegetarian dish, but it’s well indicated on the menu, and the rest is strictly vegan.

Definitely pricey, this is where you want to go to have a classy or romantic vegan diner in Paris. The haute cuisine dishes are great, and started the movement of vegan gastronomy around the world. The menu offers an interesting choice of dishes with exquisite presentations even though we’ve been a bit disappointed by the size of the Gourmet one, so we would recommend making another choice or to enquire to the waiter of the portions sizes as not to be disappointed. Everything is vegan and your omnivorous friend, relative or SO won’t even realize the cheese of the platter is plant based!
The wine is also carefully selected and therefore very good. 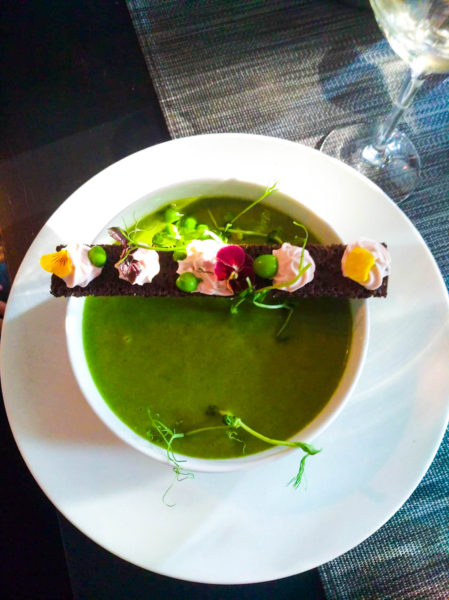 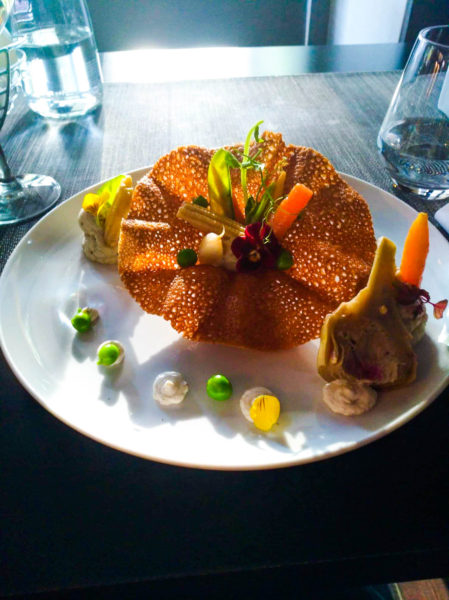 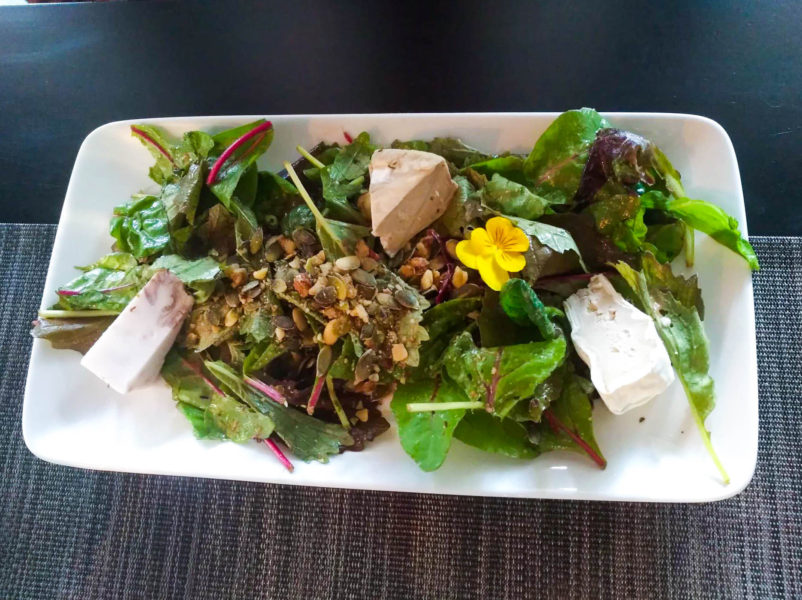 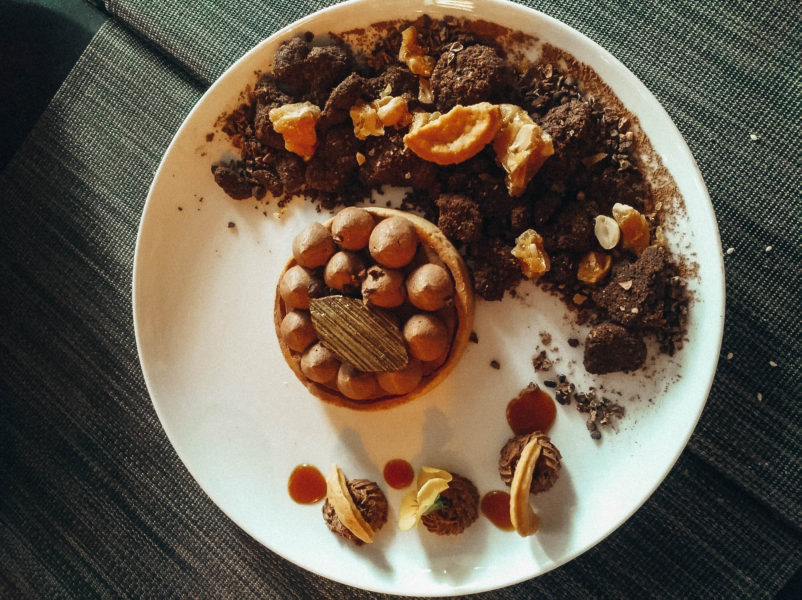 Order: They change the menu often, but the Vromage seems to be a staple. You won’t be disappointed by this trio of vegan cheeses
Where? Bastille close to the Opera and the Seine – 24 boulevard de la Bastille
Website: https://gentlegourmet.fr/en/
$$$ | reservation compulsory

Vegan Folie’s is a completely vegan bakery in Paris with delicacies to die for. Located in the Latin Quarter, in the famous rue Mouffetard (5th arrondissement), you should stumble upon it on your discovery of Paris. If you’ve missed cookies (do you start to see an addiction to cookies?), cupcakes and French treats, here is a way to get your fill! They also make smoothies. It’s the perfect place to grab breakfast, dessert, or a snack on your wild journey! Some treats are also gluten free.

Order: A cupcake (they change the flavors every day) or… a cookie!
Where? Latin Quarter – 53 rue Mouffetard
Website: http://veganfolies.fr/patisserie-vegane/
$

My favorite Vegan-Friendly restaurants in Paris

Sometimes, you’ll have to go with vegan-friendly only if that’s not too much of an issue for you. You’re probably looking for a place to have a vegan brunch in Paris or have the experience of the French bistro in a very central place. Otherwise head to two of my top-of-the-list favorite: the only Indian restaurant I go to in Paris, or the amazing African restaurant where we went to celebrate our 2 years wedding anniversary!

I have to be honest, the brunch was not as earth-shattering as the price would have indicated, so Café Pinson is the only one of the list that is not really one of my all-time favorite. However it is worth mentioning as a good option to have a vegan friendly brunch in Paris, and the place in itself is really gorgeous (instagram spot here!). 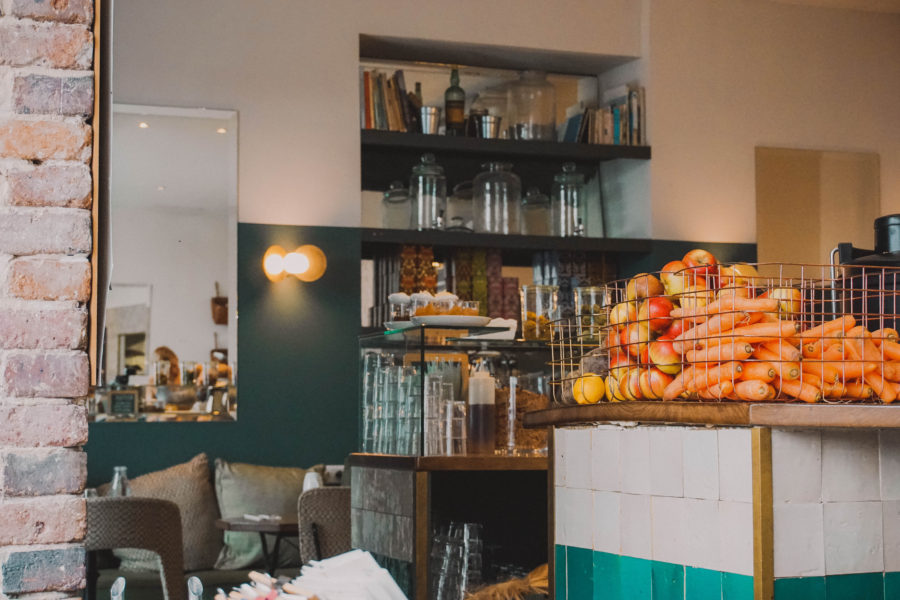 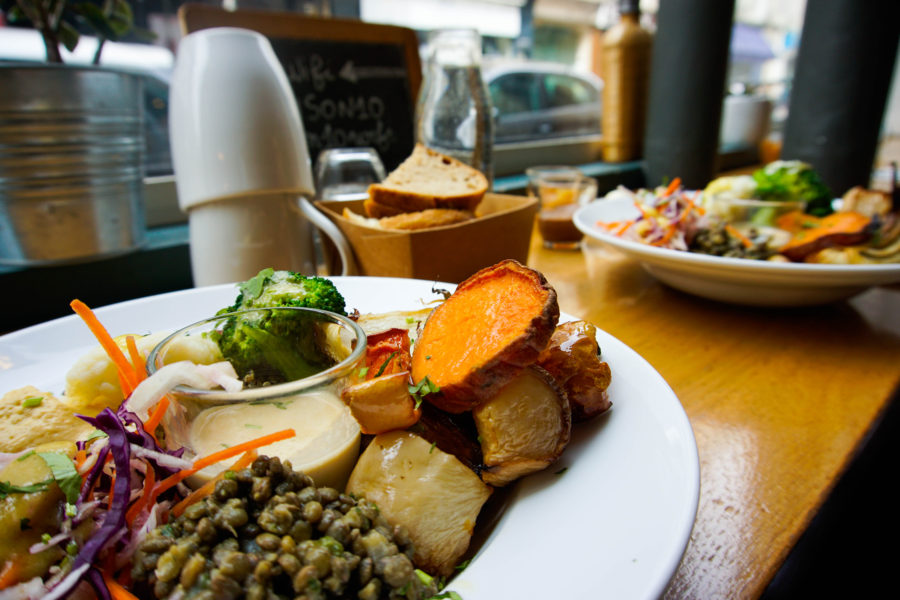 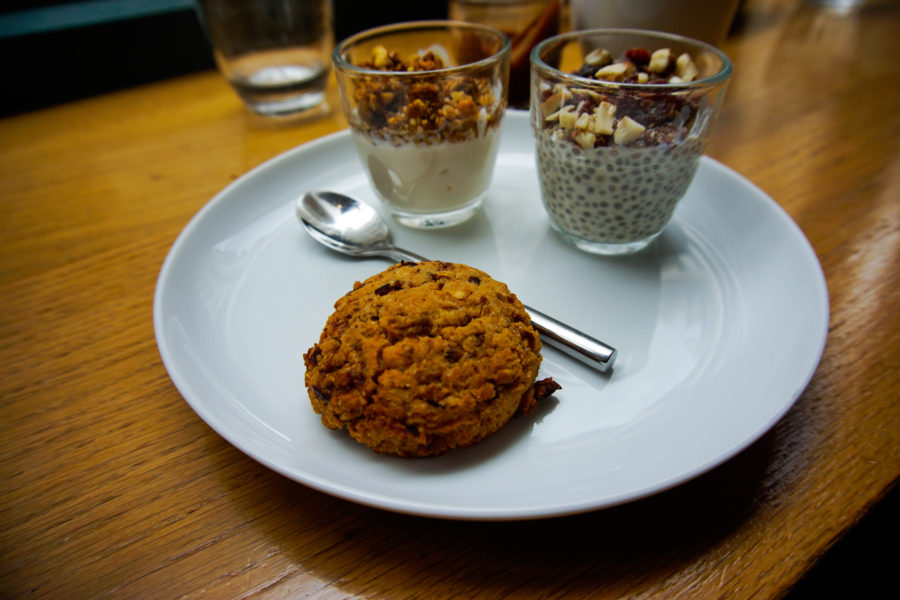 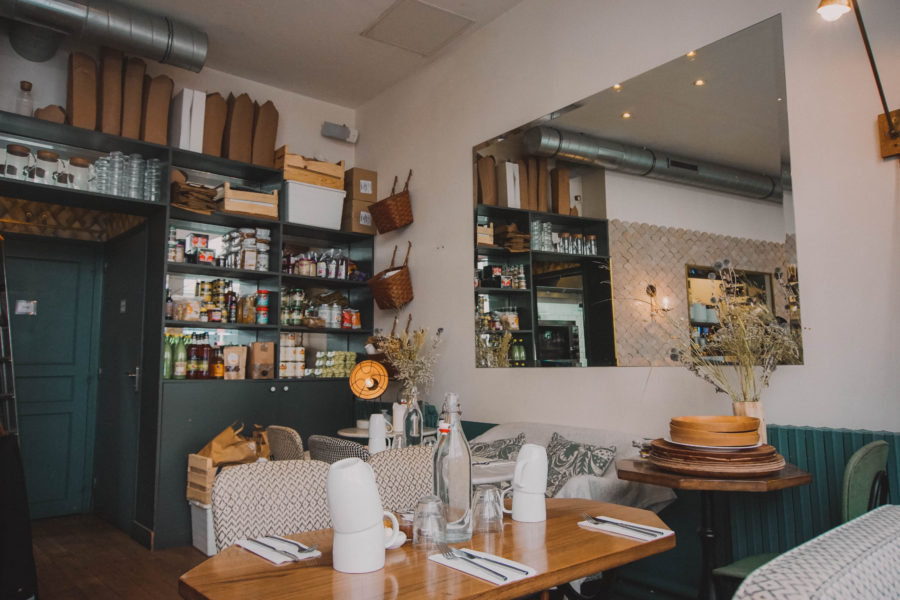 Order: the Brunch Énergisant, a vegan brunch with a salty and a sweet dish, plus different yummy spreads for your toasts.
Where? They have two locations: one in Poissonière that I tested – 58 rue du Faubourg Poissonnière
The other one is in Le Marais – 6 rue du Forez
Website: http://www.cafepinson.fr/english-digest/
$$

This vegan-friendly restaurant is conveniently located in the Halles neighborhood, which is one of its biggest qualities. Who wants to be starving after a shopping session, I ask you?! Also if you’re looking for some old-fashioned or classical meals in the heart of Paris, this is definitely where you should go! Végétales’halles is your best bet at experiencing the French bistro while safely stuffing your face with yummy vegan food.

Vegan-friendly Indian restaurant Krishna Bhavan has been a God-sent when I came back from India, just wanted to go back, and missed the cheap and delicious food. I found everything that I was eating in Rajasthan and it tasted exactly the same! Since then, I haven’t voluntarily set foot in another Indian restaurant when I was in Paris!

Order: I’m addicted to their idli (more of a starter / side) which tastes exactly as I remember from India. Same goes with the dosa (nature or masala) which is a long tasty crepe.
Where? They have 4 locations: three in the same street in the « Indian quarter » in Gare du Nord – 21, 24 and 15 rue Cail, the other in the Latin Quarter in the 5th arrondissement – 25 rue Glande.
Website: http://www.krishna-bhavan.com/
$

If you want to try something different and classy, African restaurant Niébé has a vegan menu, and it’s delicious! We went for our anniversary dinner and couldn’t have been happier. It actually reminded me of our excellent anniversary dinner of the previous year in the equally great vegan-friendly restaurant Home in Belfast. Vegan eaters have enough choice to be satisfied, the portions are out-of-this-world big, and the service is attentive and high-quality. There was even a live jazz concert when we went, it couldn’t have been better! They have a bartender on site so you won’t even have to stick to wine and can order something a bit more creative. 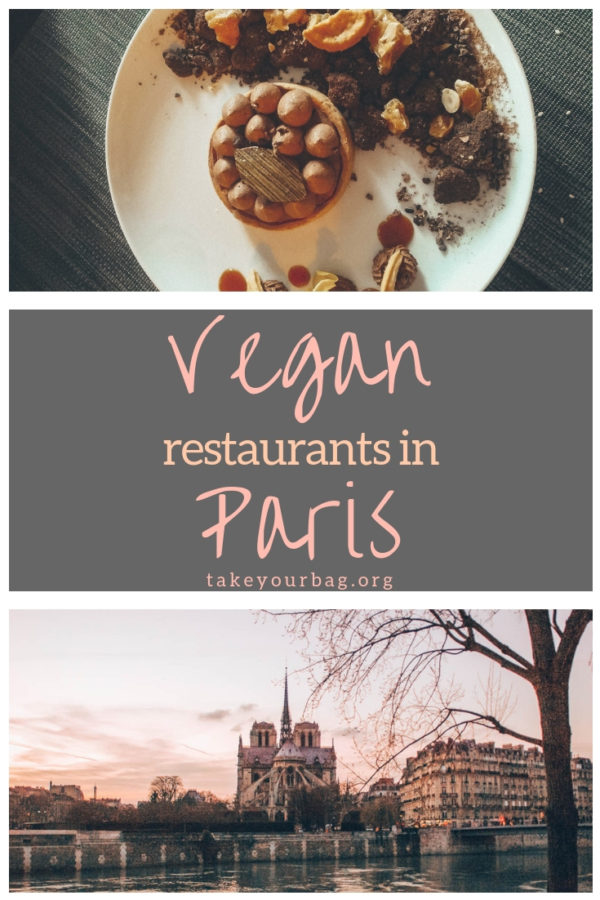 Wow! I’m impressed with the vegan options in Paris. I’m always looking for a good vegan/vegetarian burger and can’t wait to try it at Hank Burger. The food presentation at Gastro is beautiful and almost too pretty to eat. Would love to try everything on your list.

Hank Burger really was my HQ when I was still living in Paris. I would go almost once a week because the burgers are THAT good and it’s really not expensive 🙂 Definitely agree with you about the Gastro dishes too!

Omg this looks soooooooooooo good. I might have to go to Paris just for this.

Haha you should! There are great options to eat!