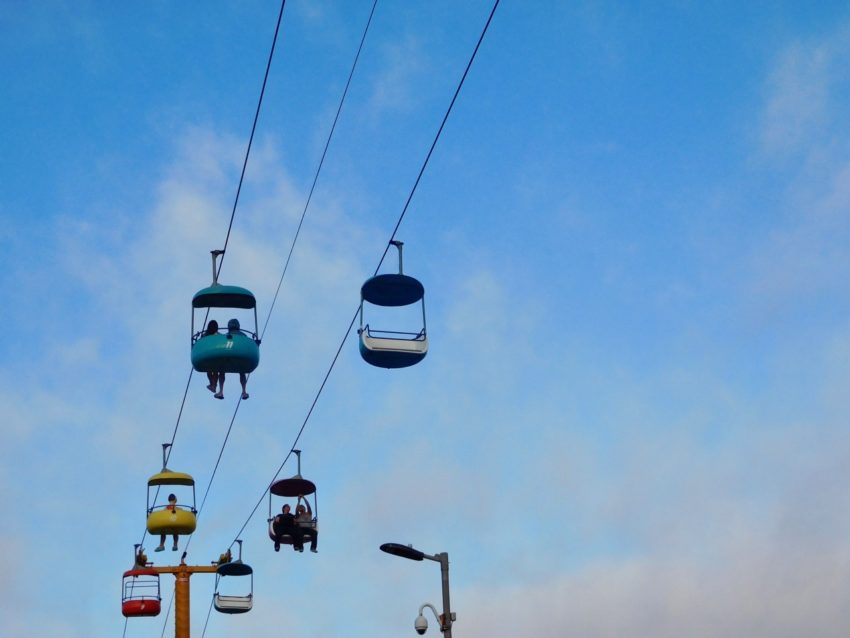 What to do in Santa Cruz

We posted a Santa Cruz photo diary some time ago, as we went twice and didn’t do much on the first time. The second time, we practically didn’t see our friend as he was leaving on vacations, but generously left us his apartment! Honestly after almost 3 months of going around the United States by bus we were pretty exhausted and really looking forward some down time by ourselves. Not having to switch rooms or looking for a cheap place to stay was definitely a huge plus.

While we didn’t do any rollercoaster ride, we had some french fries and a good time people-watching. The fair is pretty small but it is a really fun place you should definitely check out if you spend a few days in Santa Cruz! Also: don’t miss the benches made of surf boards. 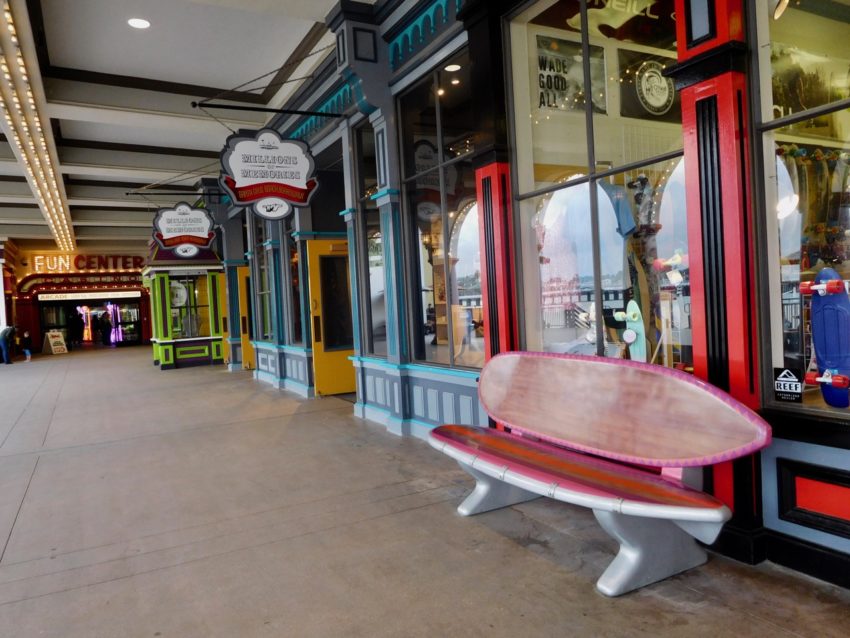 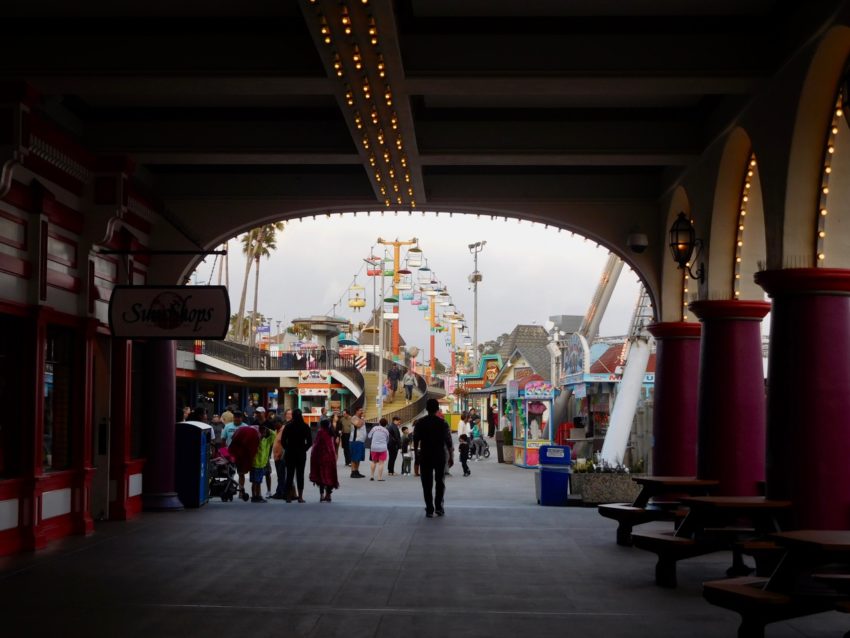 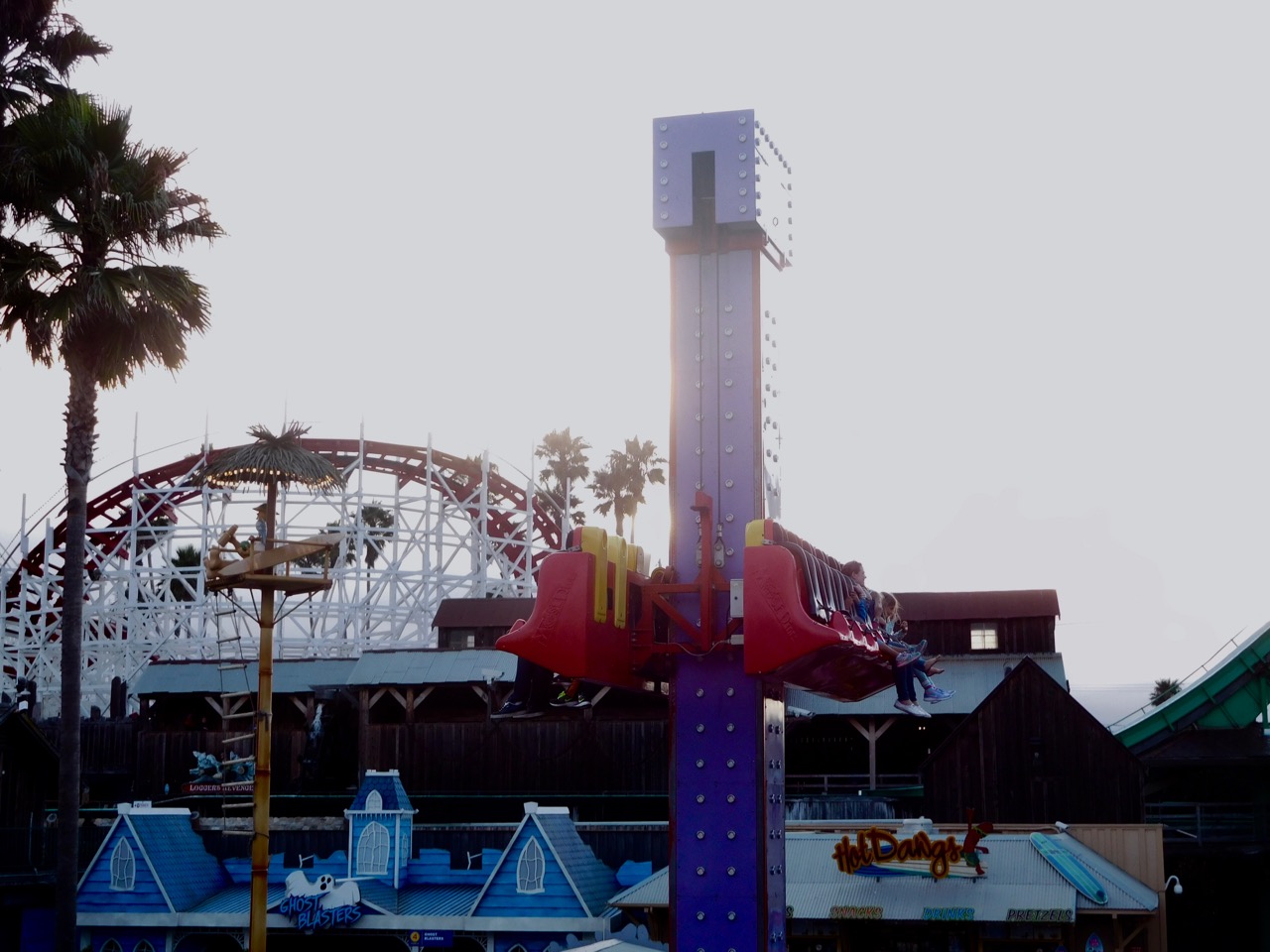 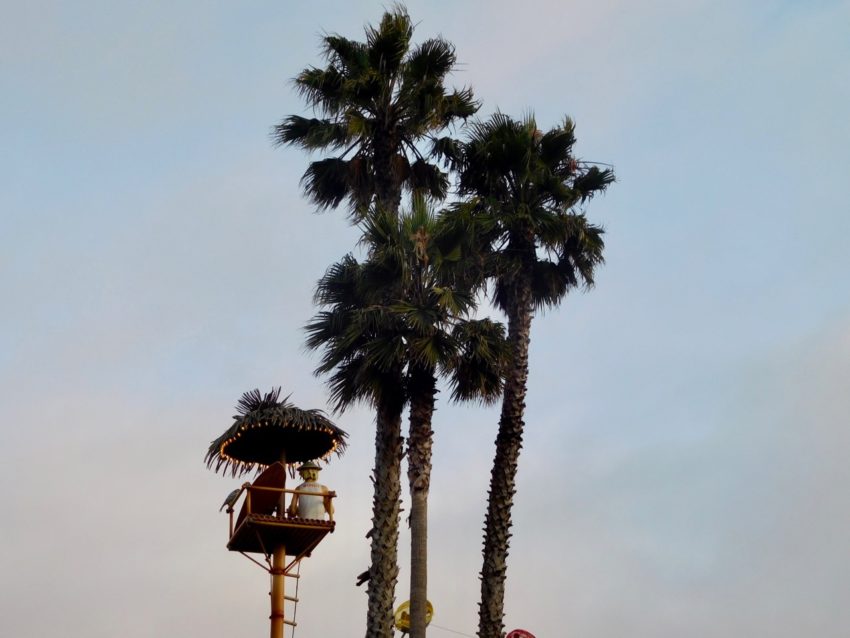 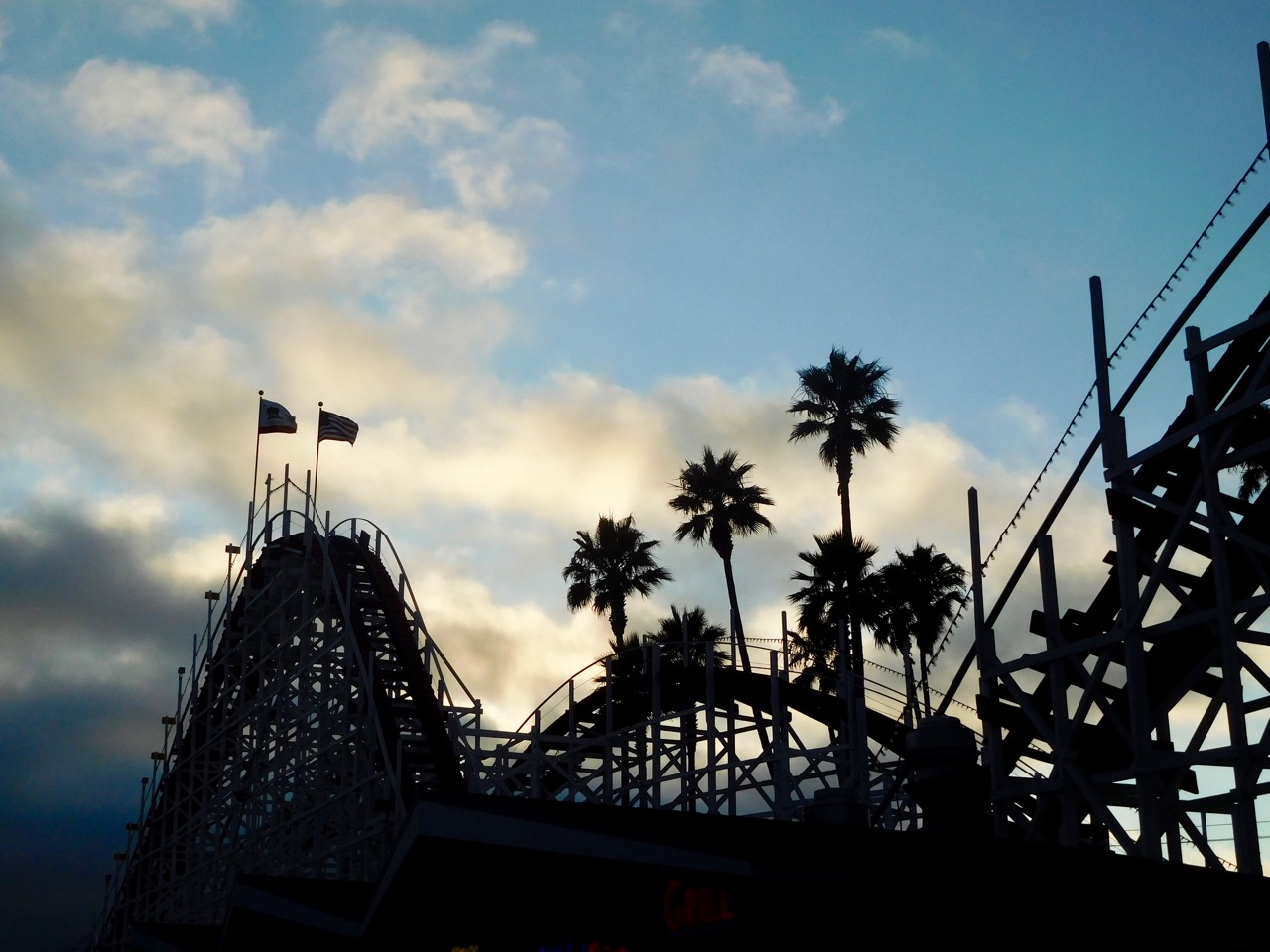 As you might already know, Santa Cruz is pretty big when it comes to surf. With cliffs all around and big waves, you will undoubtedly pass by some memorials to surfers who lost their life in Santa Cruz waters. But you’ll also be able to visit the nice (but very small) surf museum and watch surfers take some waves! 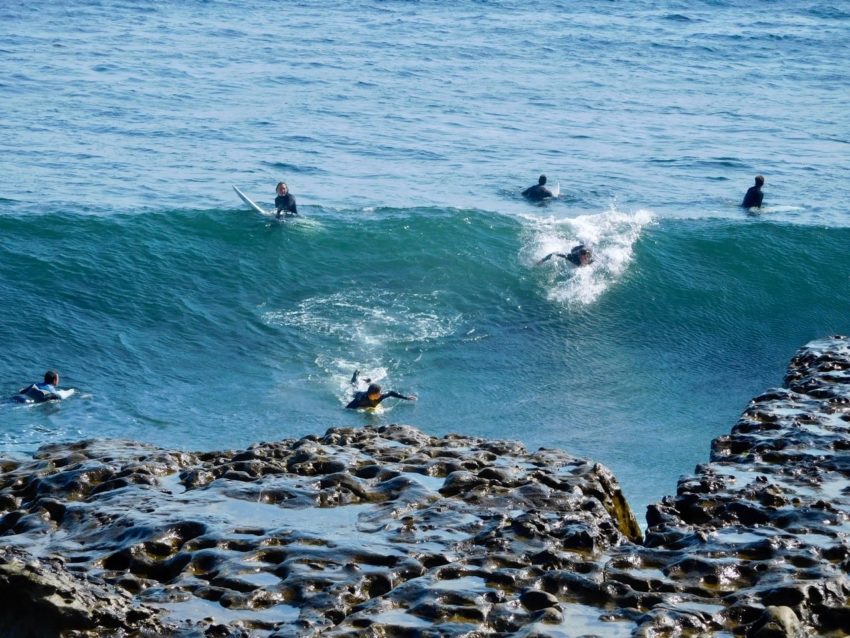 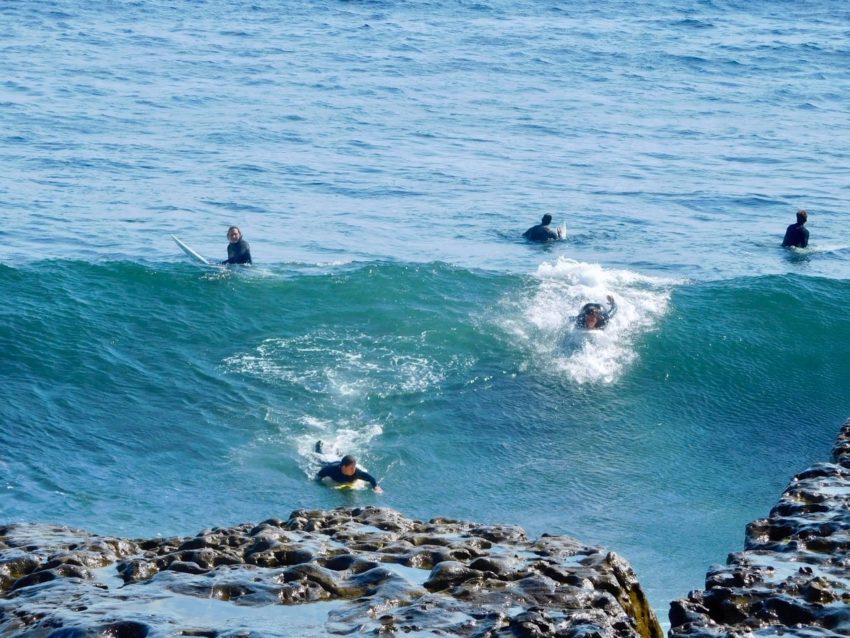 Alice is a big university geek, and our friend going at university at UCSC had told us how great the place was. So one day we took the bus (two buses, actually), and went there. There’s a bus in the city center going all the way to the university but we recommend you do some research on where to stop at. We hadn’t, so we made a mistake and stopped too early, fortunately we did catch another bus and stopped at the bookstore stop.
UCSC is indeed impressive, it looks like a university hidden in the mountains, built in harmony with the huge trees that you’ll see all around. Apparently, racoons are seen over there pretty frequently but we didn’t meet any (it’s probably better this way!).
You might want to check out bus routes and schedules for the way back, as well. We didn’t and ended up waiting a long time for the bus to take us back to Santa Cruz city center. 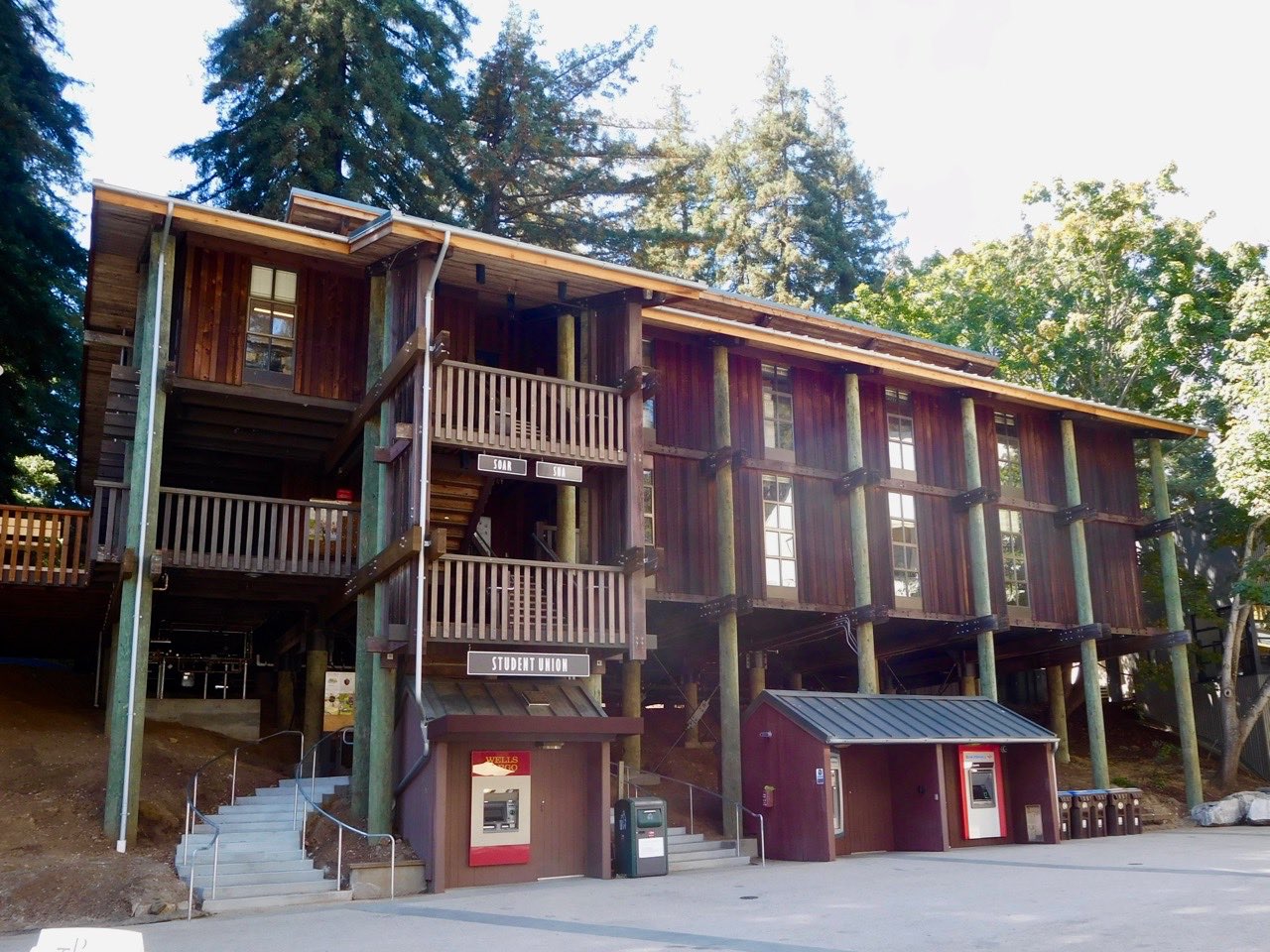 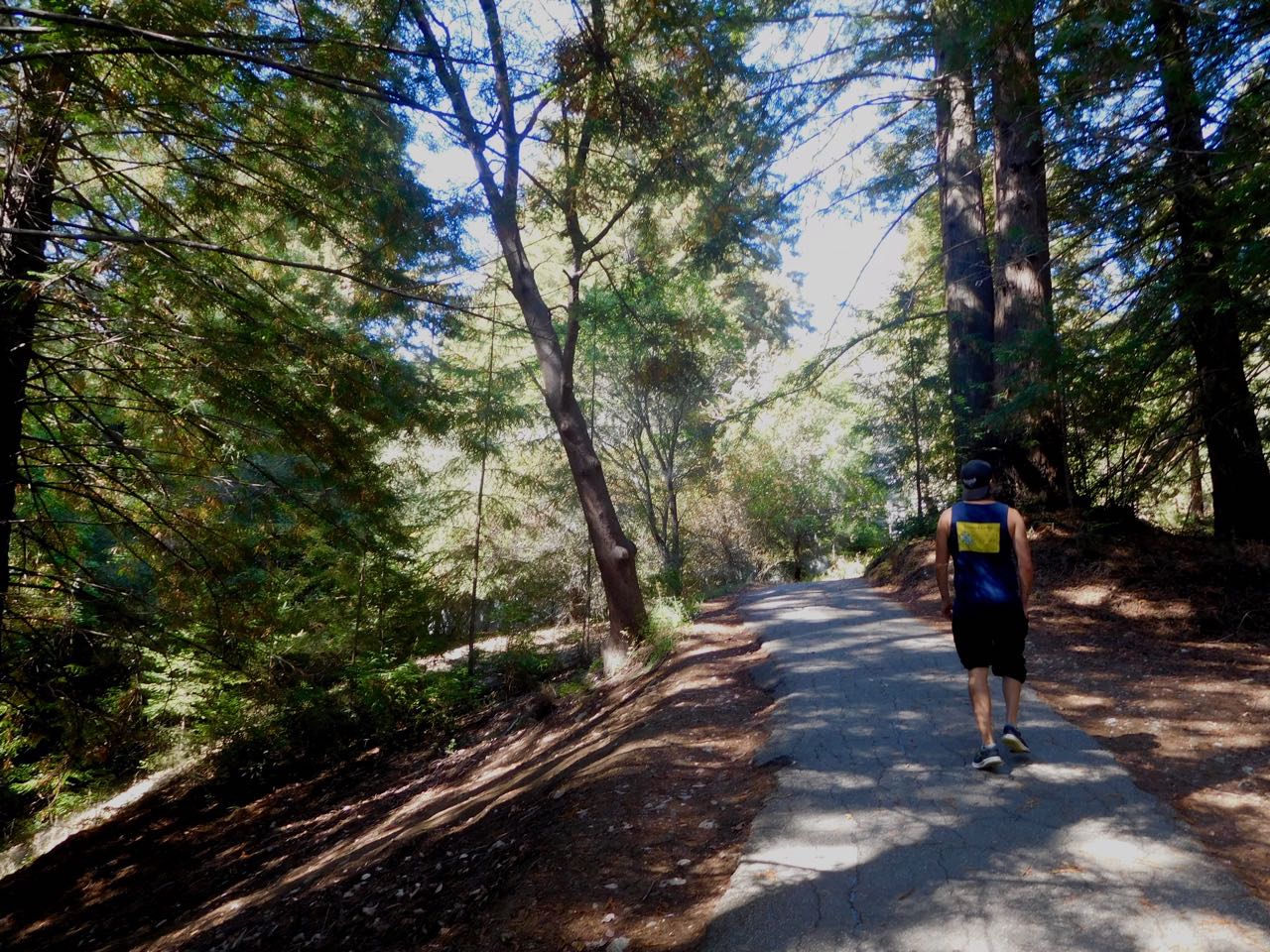 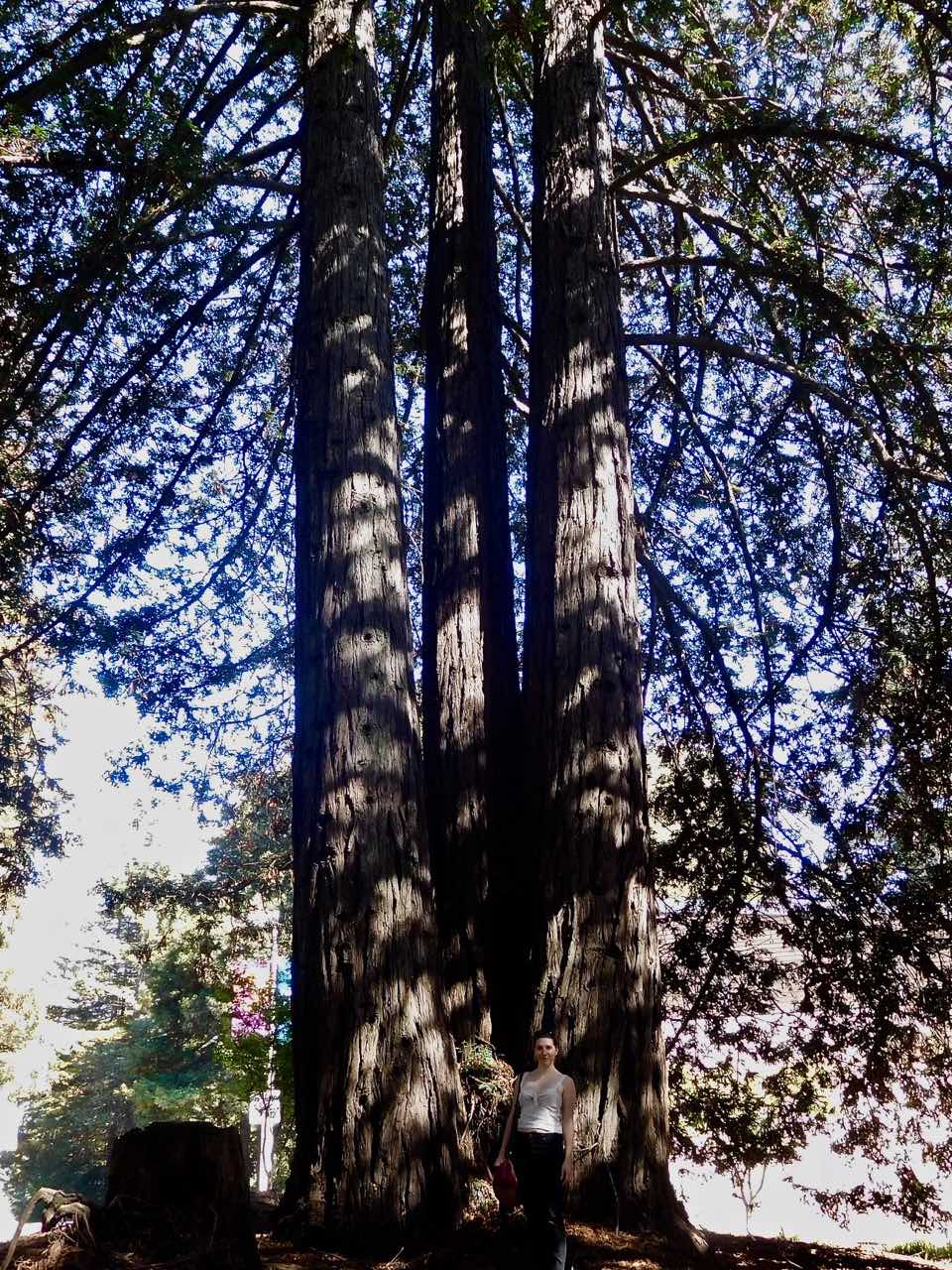 If you’re crazy about beautiful universities like Alice, you might like to have a look at our top 7 universities we visited while we were in the States!

Where to eat vegan in Santa Cruz

As we were hosted in a full fledged apartment, we usually went to do some groceries to cook at home. The New Leaf Community Market has everything you can wish for when you’re vegan, including some delicious pizza with vegan cheese.
However, on our last day in Santa Cruz, before we had to go and take the bus to Los Angeles, we stopped by Saturn Cafe for a vegan burger. It was delicious and the place is really cool, with awesome service. We loved it!!! 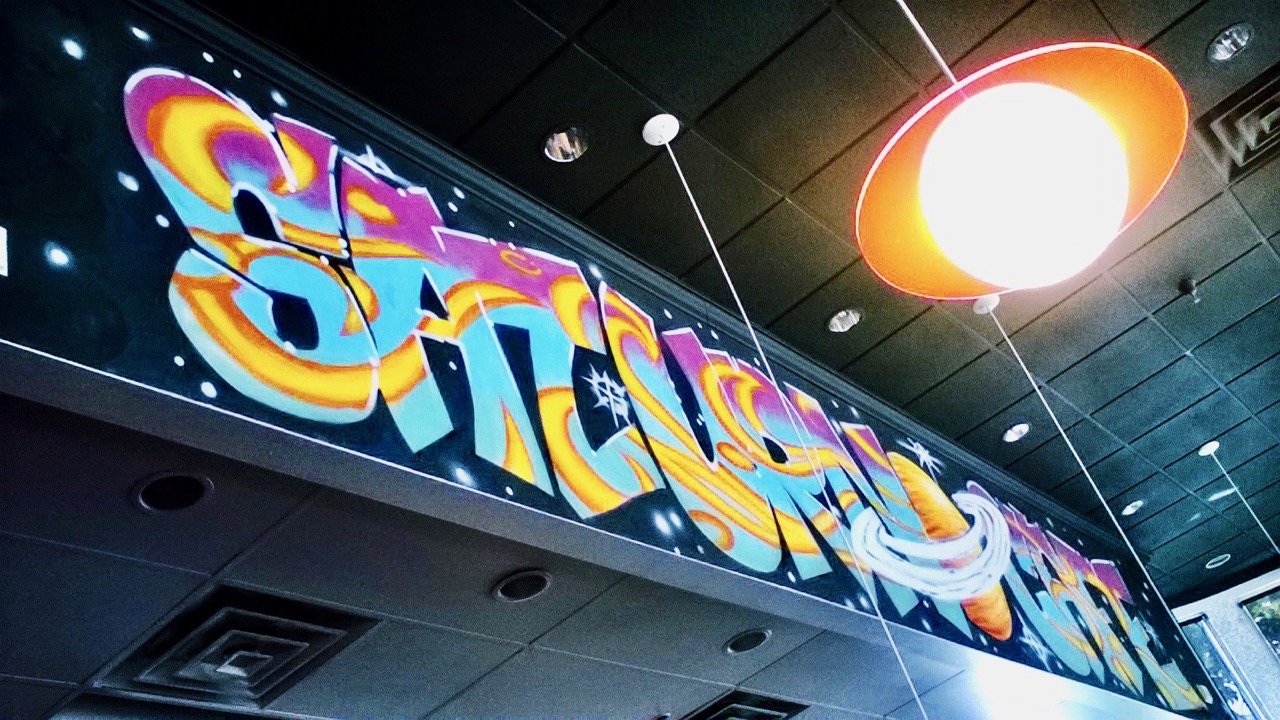 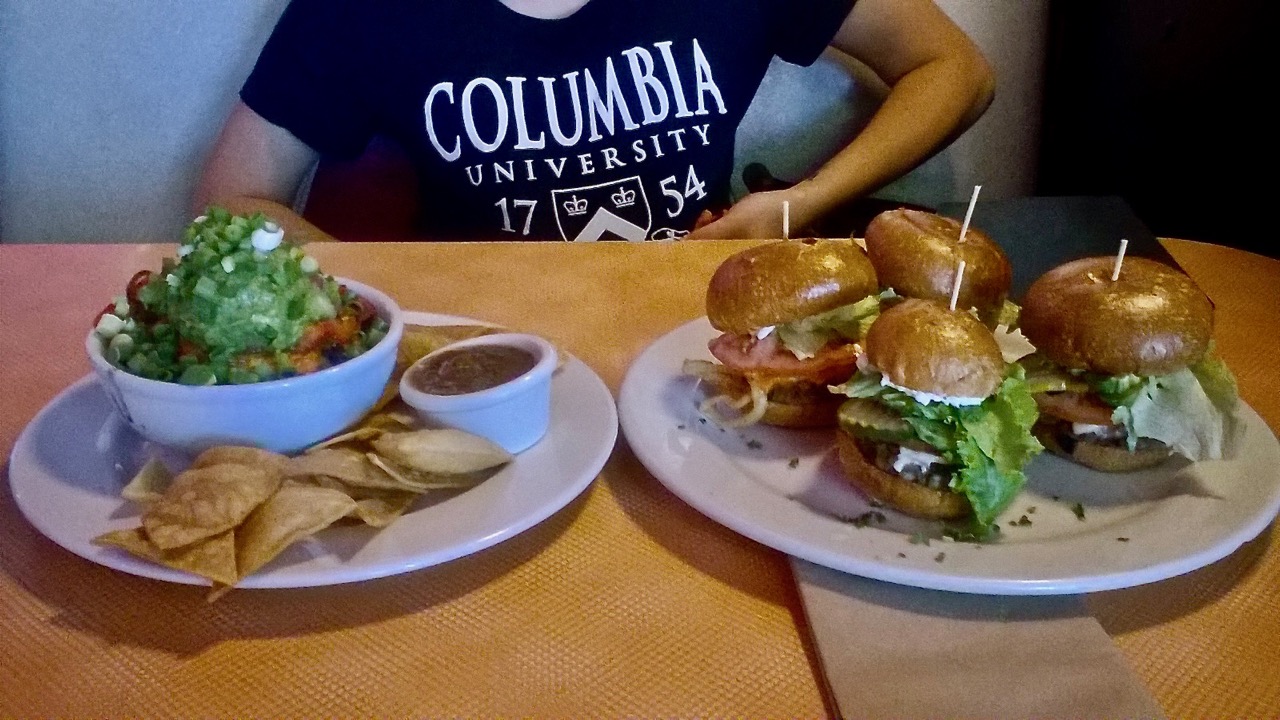 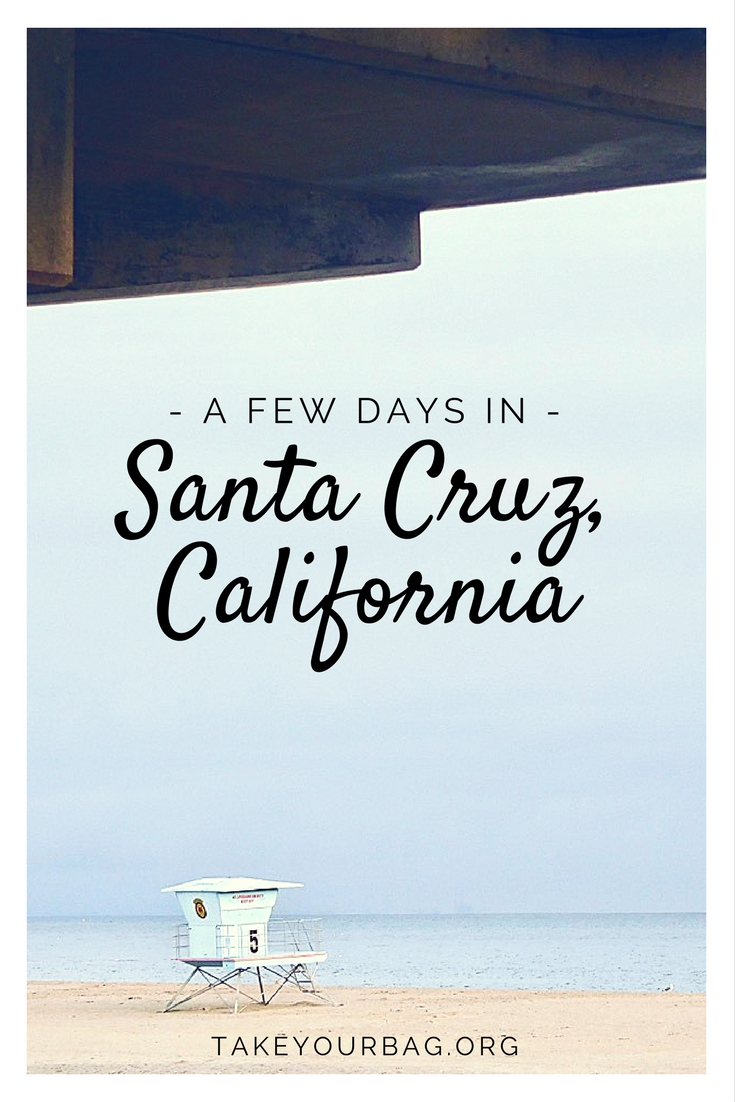 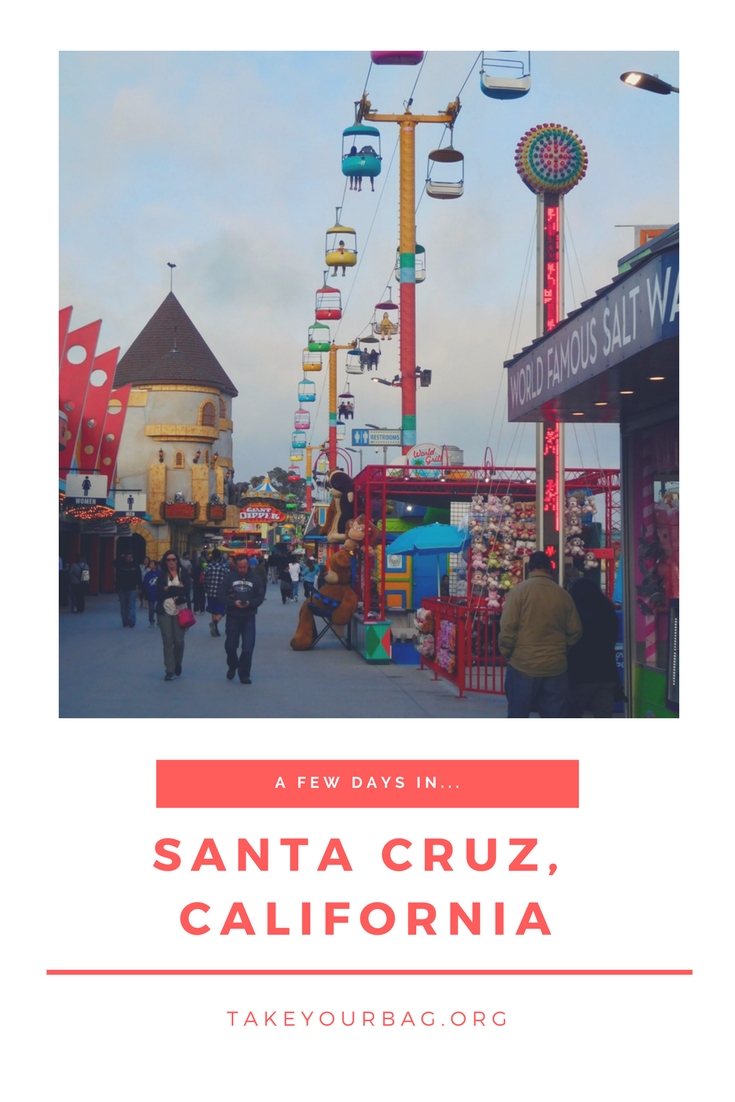 Hah, don’t you just love taking buses over buses just to see one thing? Santa Cruz looks like a lovely place to recharge your batteries 🙂 I could use me some sun right about now..

Haha yeeeeeaaaaah taking 5 buses to go to UCSC, it was the BEST part :p Tell me about it, if I could be there right now I would!

Santa Cruz was one of my favorites back when we hitchhiked the California coast. I loved the boardwalk! We didn’t go for any rides either but I loved photographing it.

Hitchhiking California coast must have been amazing! Did you write about it somewhere? I would love to read about it 🙂 Same as you, the boardwalk is a very nice place to stroll around and take pictures!

Great post! I’m from Monterey, and half grew up in Santa Cruz, so this one’s close to my heart. Loved all your photos and hearing about what you did!

Looks like you had a great time — I love Santa Cruz, it’s a very relaxed place!

Such a wonderful place <3 love it!