24 hours in Charleston – Rest and explore…

As you might have read, our journey from Washington Dc to Charleston was quite the ride! And it wasn’t totally over as we only had around 24 hours in Charleston.

When we finally arrived at Charleston bus station at 8:40, we had to wake up a little before thinking about moving! Simone had the worst coffee of his life, and we still talk about it as THE coffee. The thing was a really awful diluted americano coffee (please let me remind you that Simone is Italian) but he didn’t have the heart to say anything or waste it because it had been made very heartily by the bus stop employee!
Anyway, we called a cab to get us to the hostel we had booked. Actually, the hostel – the only one in town, called “not-so hostel” – had emailed us a list of numbers to schedule a taxi etc. but of course we didn’t do it ahead of time (because why not… ahem) so it was quite funny (sarcasm) to have to do it last minute. Simone called and although he was sure he booked it, he wasn’t sure of when it was supposed to arrive. It took quite a while but a cab finally arrived and we hoped on it. To be honest, we’re still not sure it was the one we had booked (another one arrived just after this one). The numbers were either not working or for the same company, it was a bit hard to understand, especially in our sleep-deprived state… But we made it! 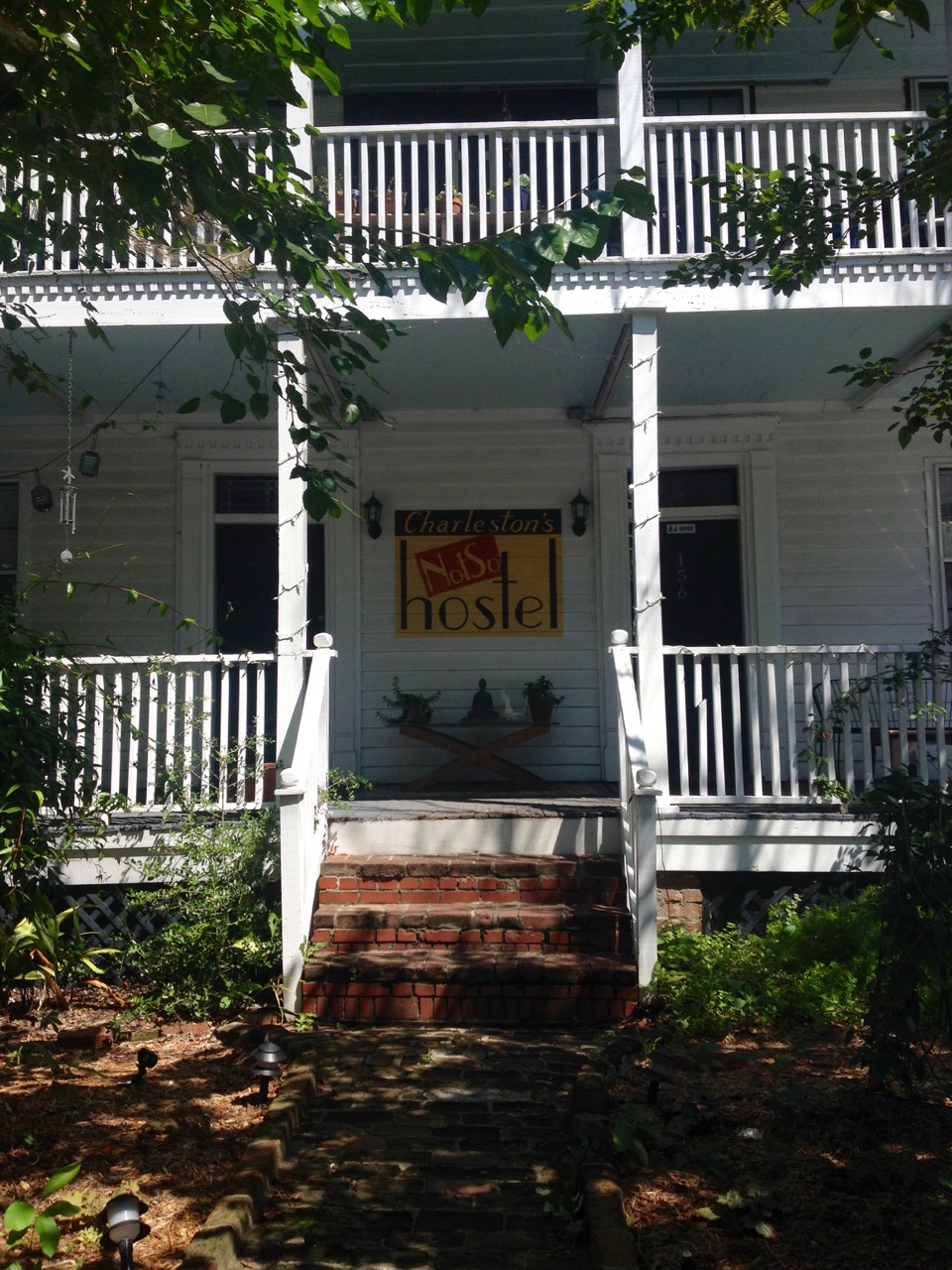 Not So Hostel in Charleston

The weather was to me absolutely horrible, super humid and hot, I was totally tired… 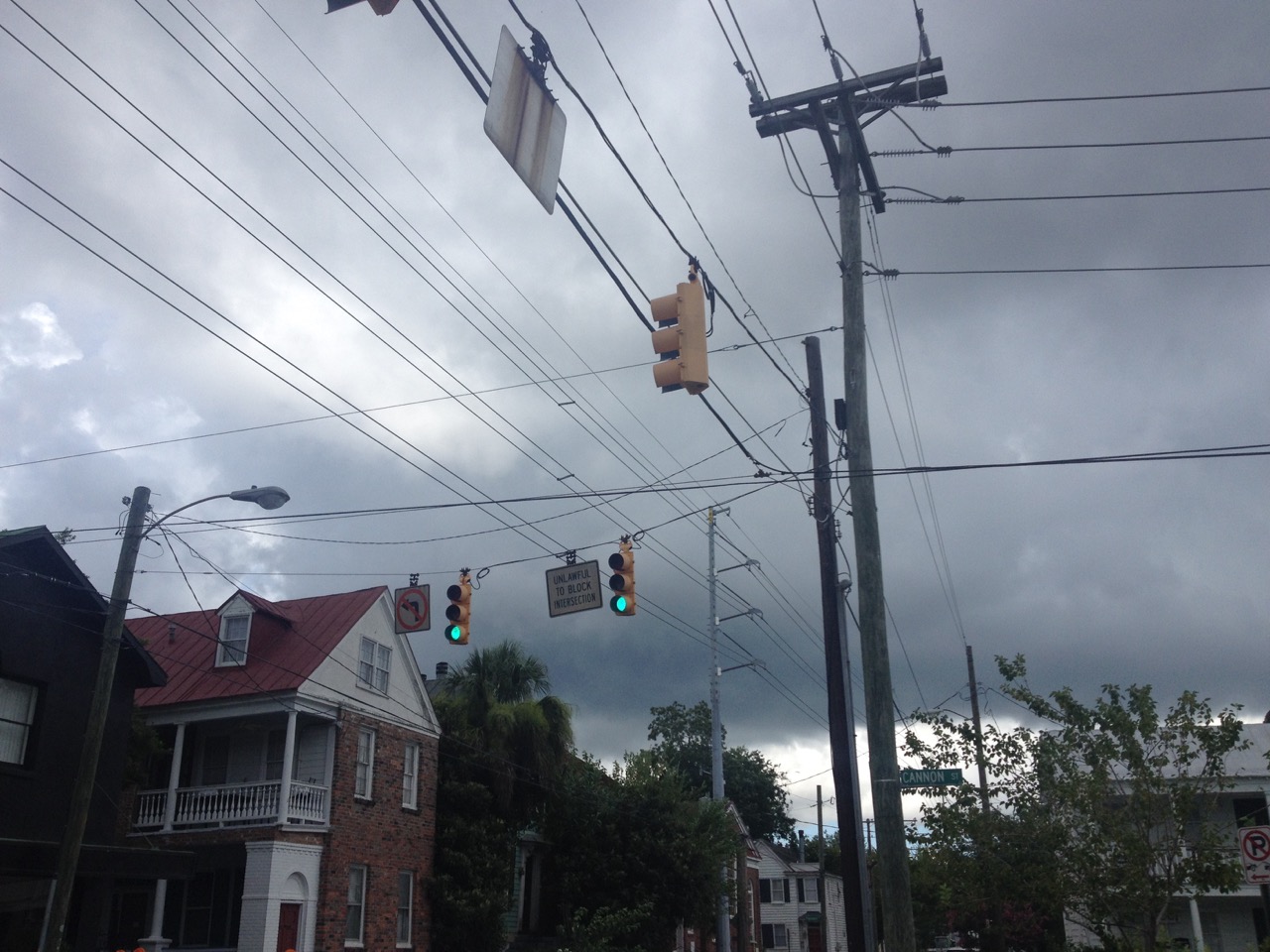 Fortunately, we had codes to get into the hostel ahead of check-in time. It was basically a two-stories house, with a living room/reception area, two kitchens, two bathrooms and a couple of rooms downstairs, and a few rooms upstairs. “Not so” a hostel in the traditional sense, I guess!
It was hard for us to get a move on and get out of the house but we HAD to. The check-in was at 5pm, so we had 8 hours to kill before we could get in the room. Really not the best when you spent the last two days in a bus crucially lacking in the showerÂdepartment ! But hell, what it was was breakfast time. A quick check on google told us there was a vegan place around the corner (basically). Perfect ! So we had some delicious food at Gnome Café while deciding what to do. 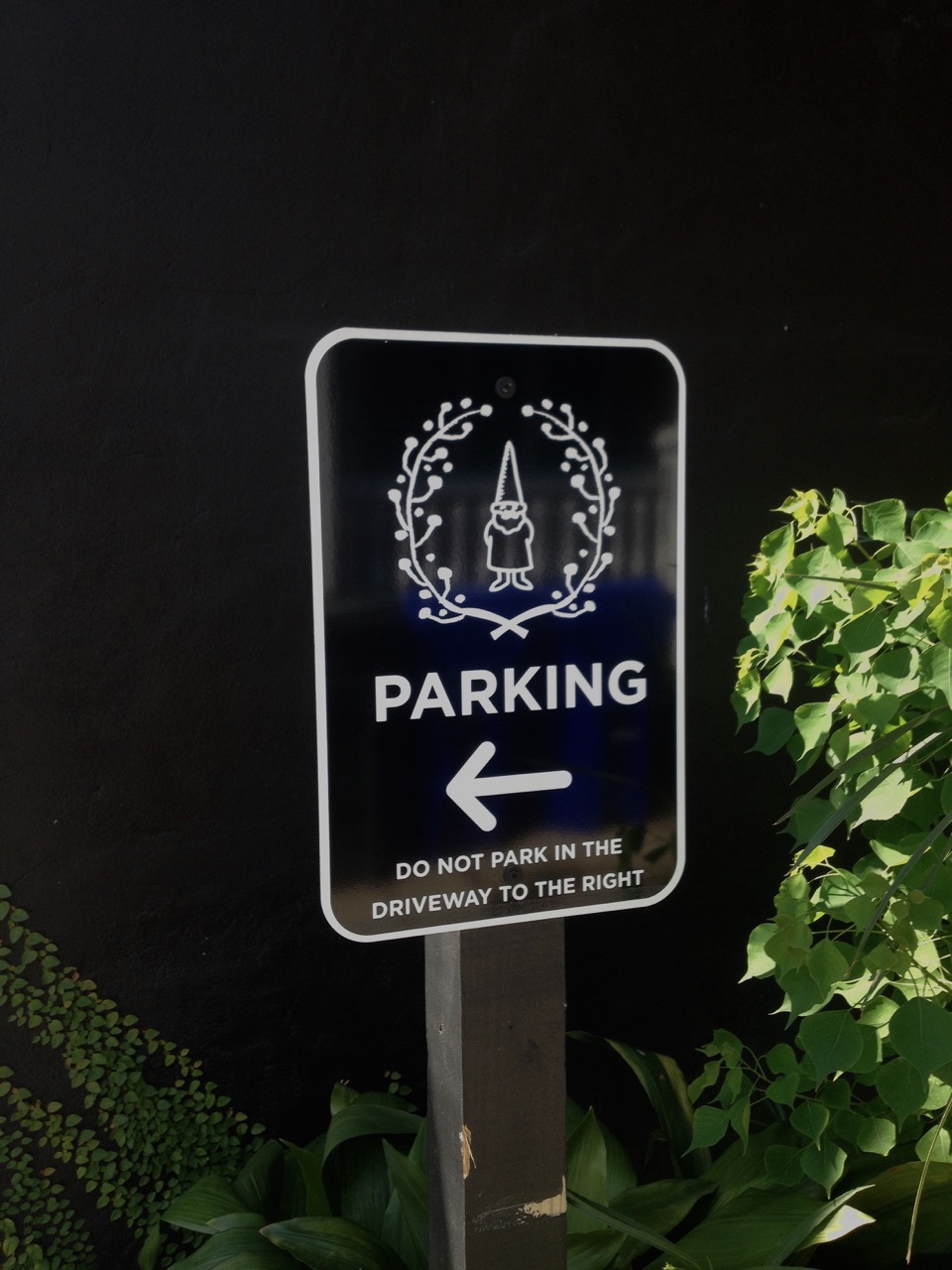 If we could have, we’d have taken a big fat nap, but we couldn’t. Simone was actually falling asleep nose-first in his coffee while I was  running on nervous energy.

However: free shuttle to town! Yay! Around the corner! Yay! We were there at 11:00, should have been there by 11:23. Still nothing at 11:36… at 12 we gave up and realized what we would have realized way before if we hadn’t been sleeping with open eyes: no bus would come because there were some roadworks. We decided to walk a bit to see if we could catch the next stop. Quick answer: no, because it started raining. 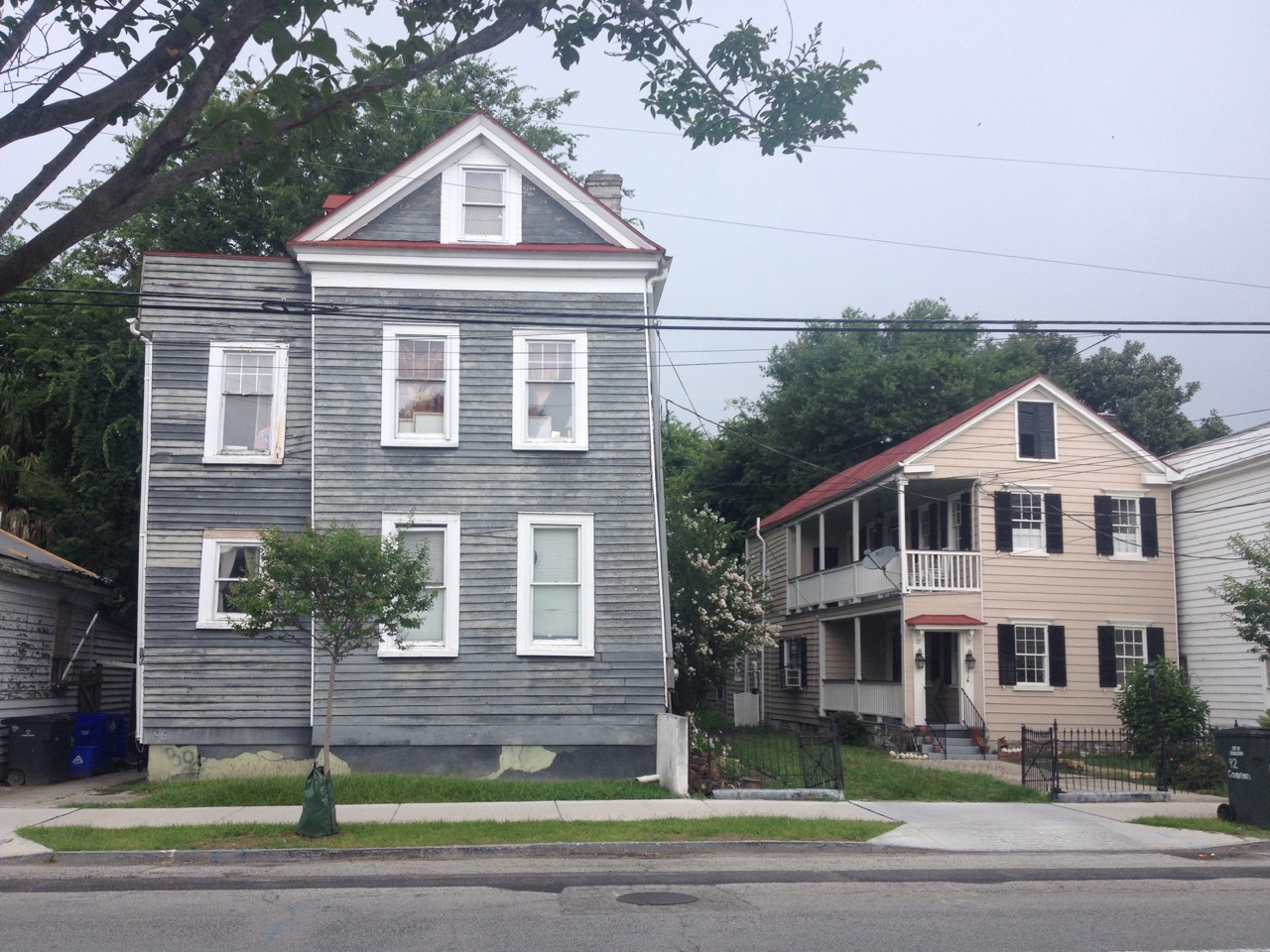 One of the abandoned / creepy houses in Charleston 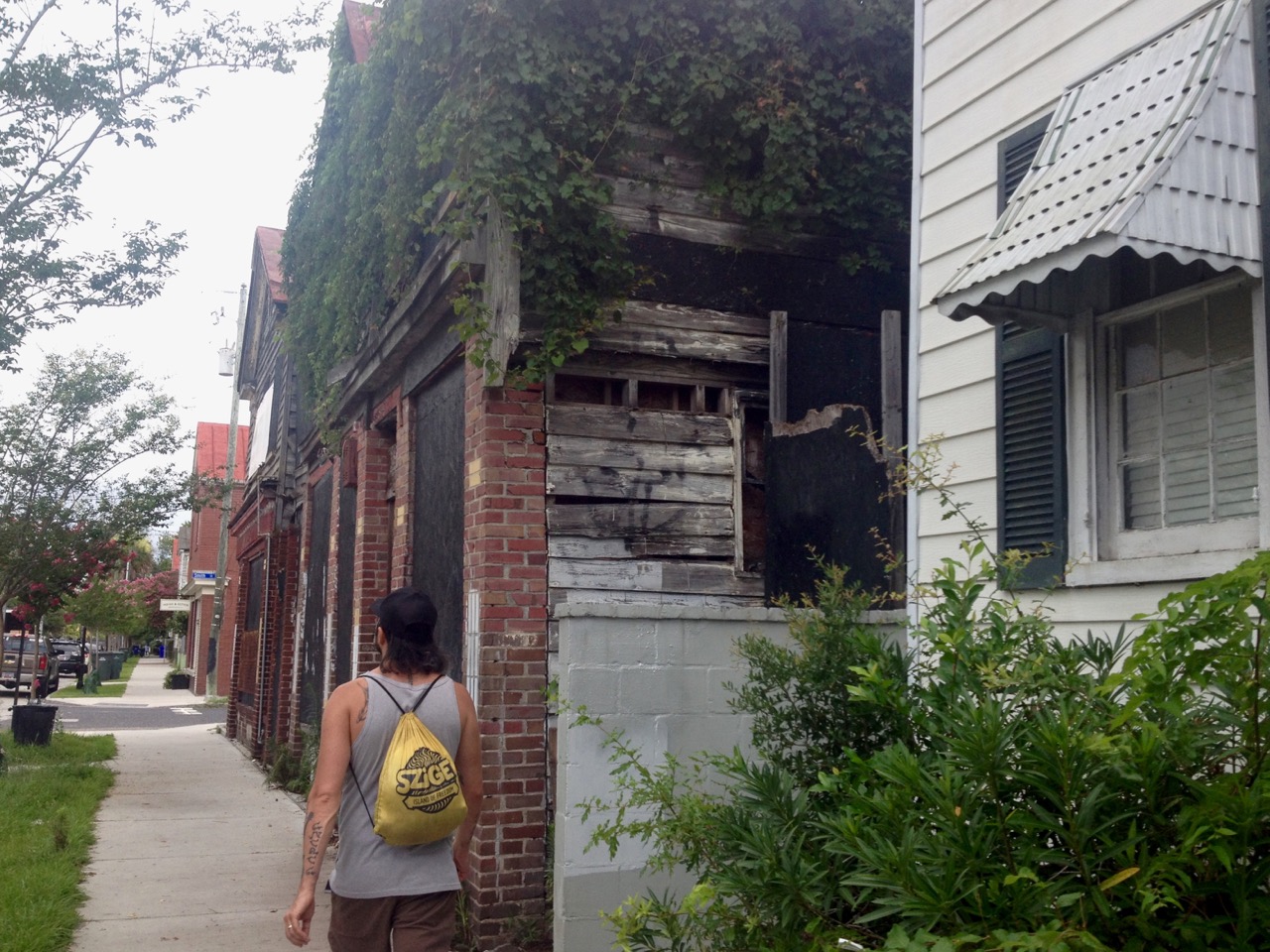 Talking a walk around 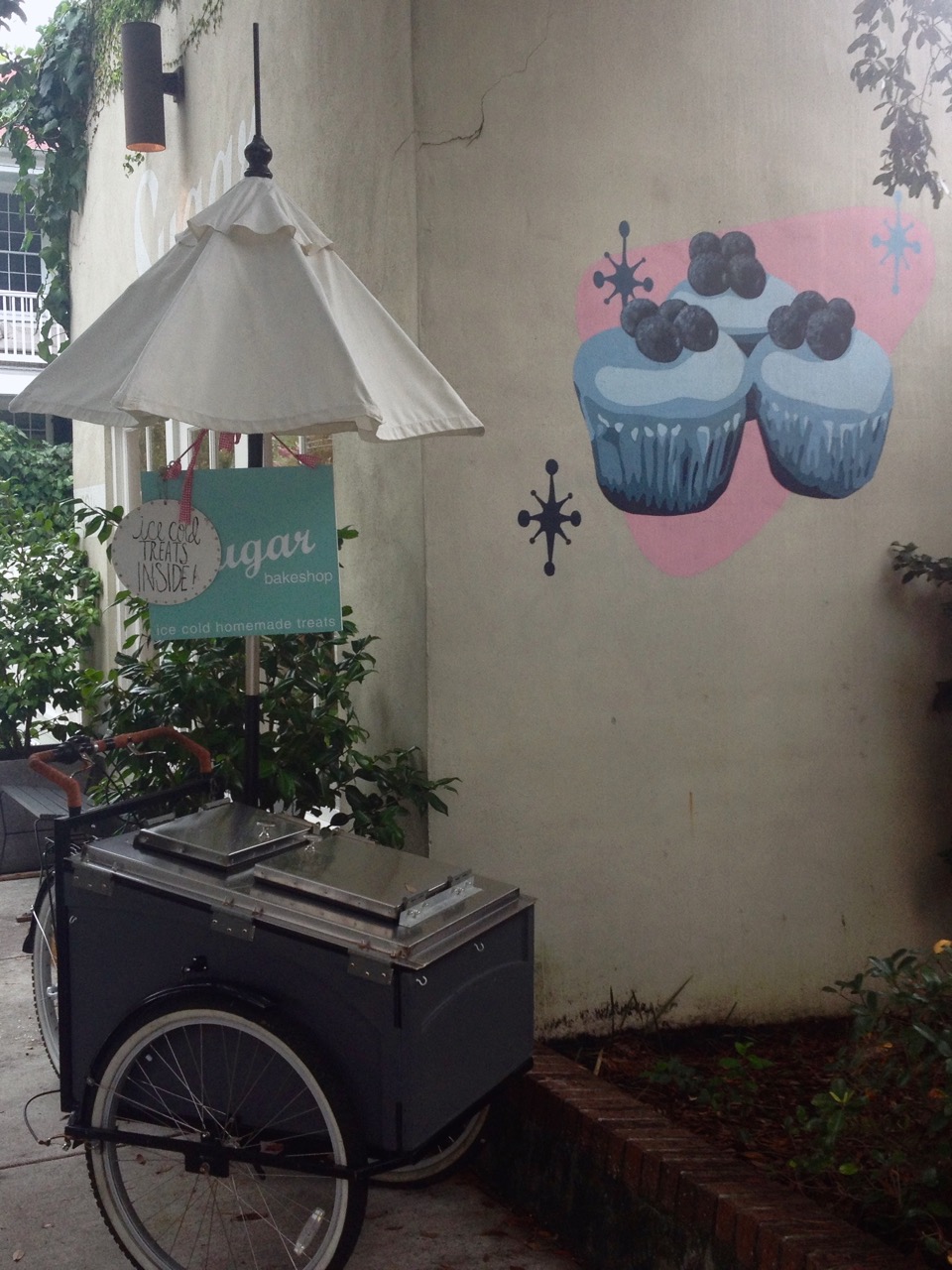 The bakery where we stopped

Instead, we stopped at a little bakery where we had coffee and tea, before going back to the hostel because the rain didn’t show any sign of stopping anytime soon. We also went to a grocery store on the way to buy some food. The owner was super nice so we had a little chat before going « home ».
There, we crashed on the couch and when Simone could gather enough strength, he made us a great dish of pasta! This is always the answer. That, and risotto.

Finally. Well, not exactly. There had been a serious case of miscommunication between boss and employees. Result: the receptionist happened to not have the keys to our bedroom, and the boss was unreachable. We (= I) would have been super graceful in handling this situation any other time but I just wanted to scream (but controlled myself) because I was so tired and the check-in was already so late and we had to wait, again, to be able to secure our bags in the room…
However, the matter was dealt with pretty quickly in the end, and finally being able to lay on the bed for a few minutes was divine…
â€¦so divine that we woke up 2 hours later! We just passed out cold, fully dressed and drooling on the bed. So totally us! Of course, then we were starving, you got it right!

We went to a pizzeria that had vegan pizzas. I had the Om and it was quite good. The place was pretty nice too. 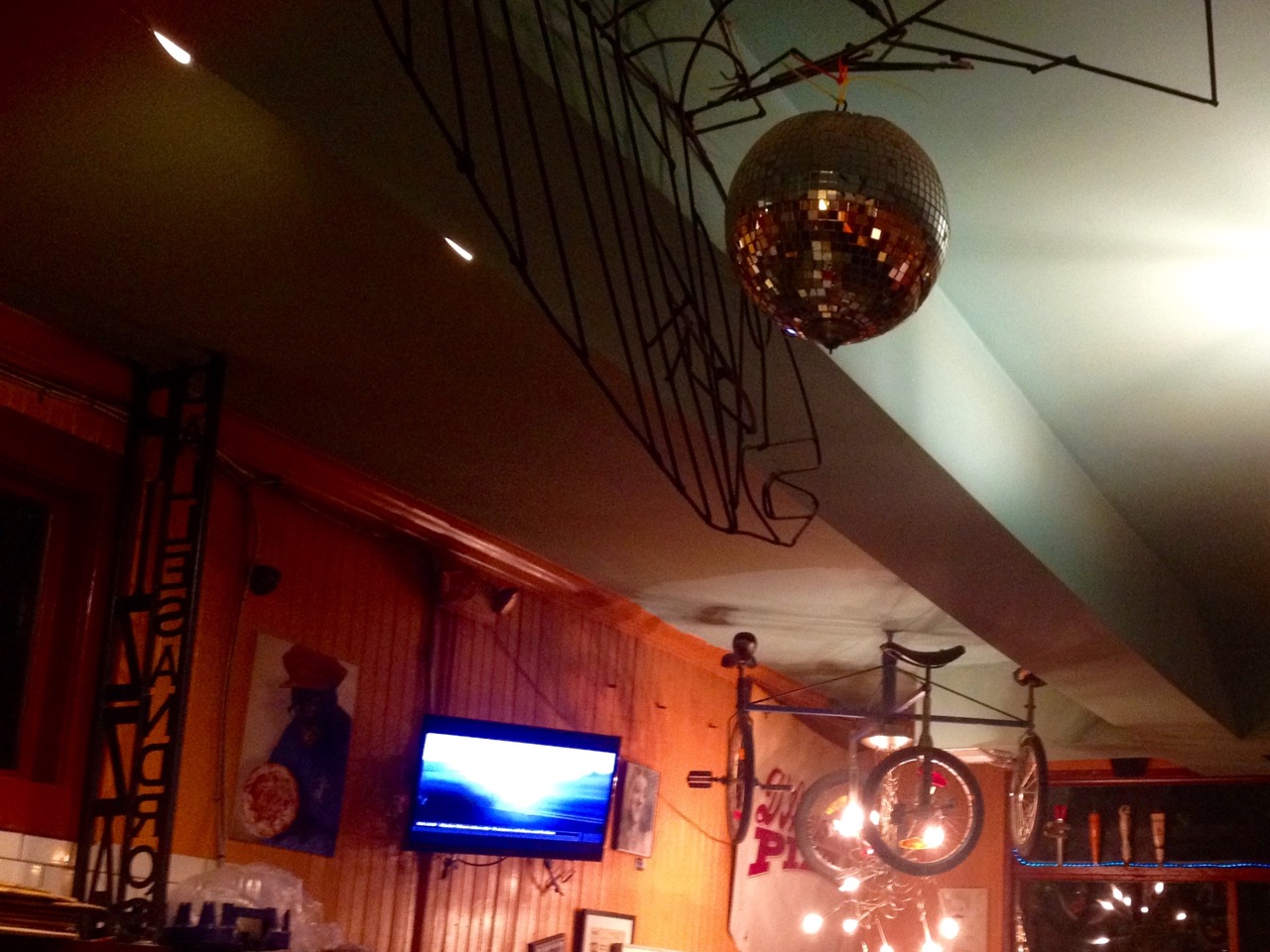 Then we walked from there to the city center, lucky that the rain had stopped.
The streets in Charleston are pretty dark come night-time and it gave it quite the spooky haunted atmosphere that we were expecting. 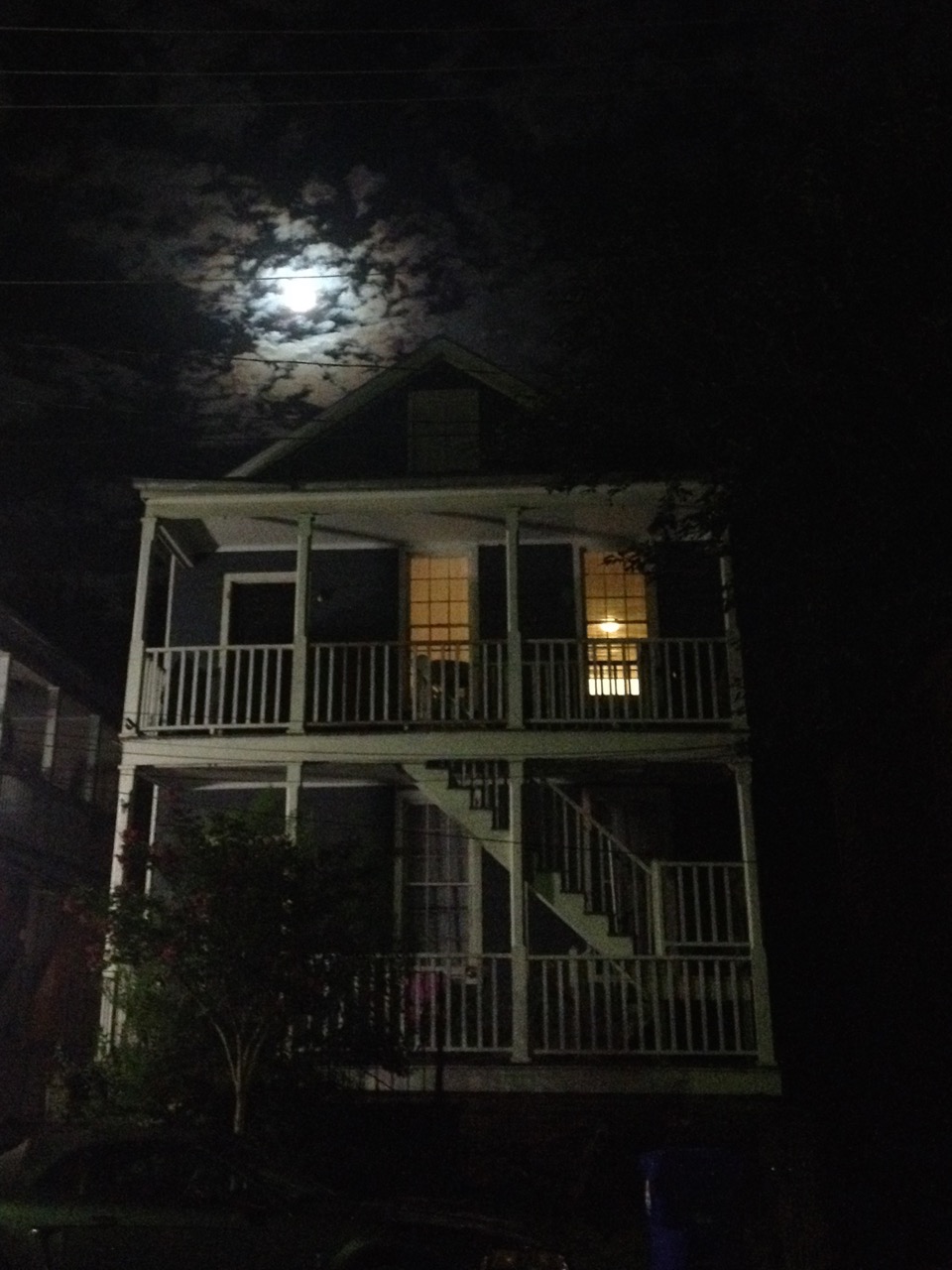 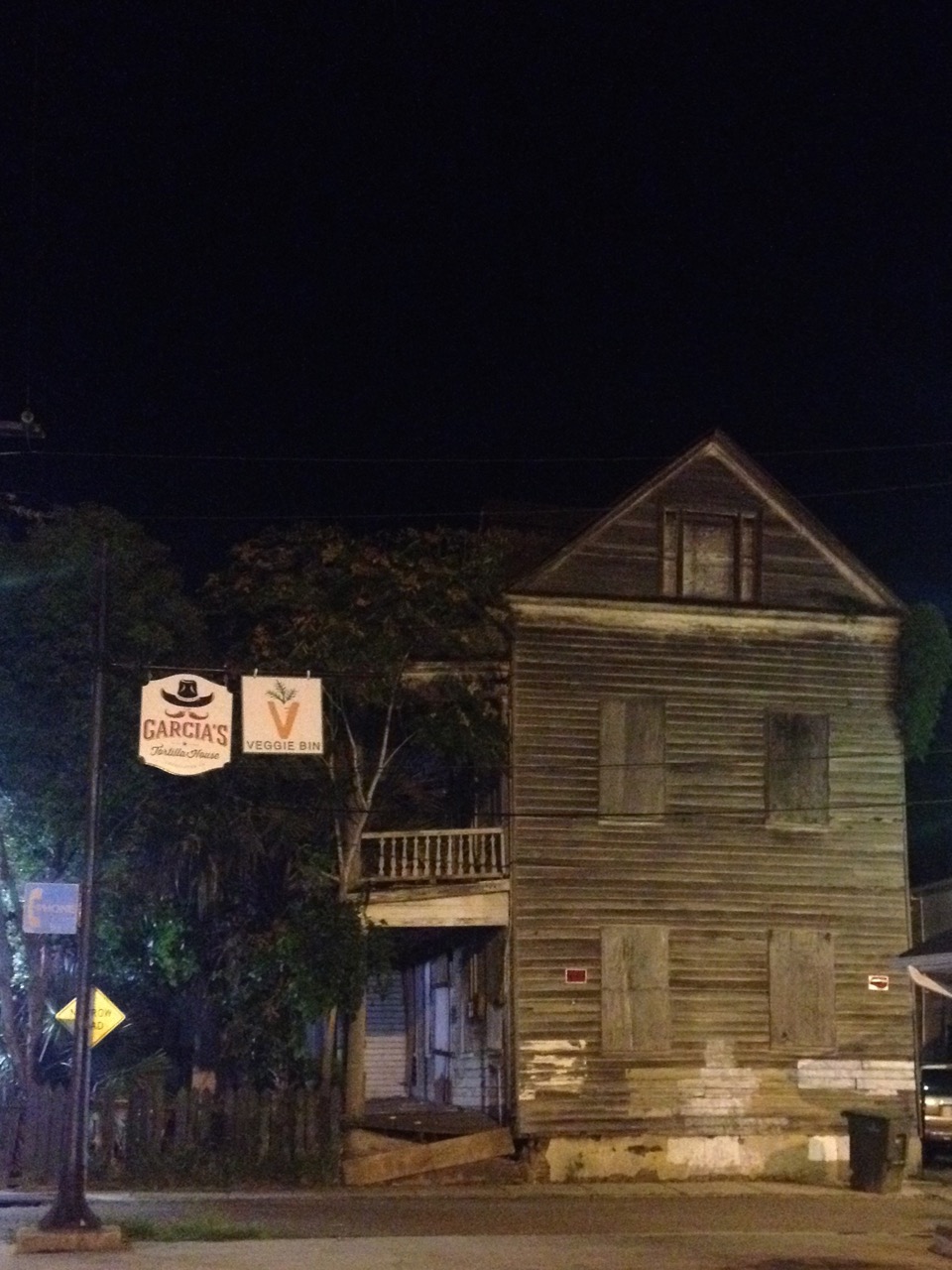 It’s a very calm and enjoyable place, even in the center. We walked along most of King Street where there’s a lot of bars (some looking very nice!!) and shops. Unfortunately, we didn’t take many pictures as the light was too low… 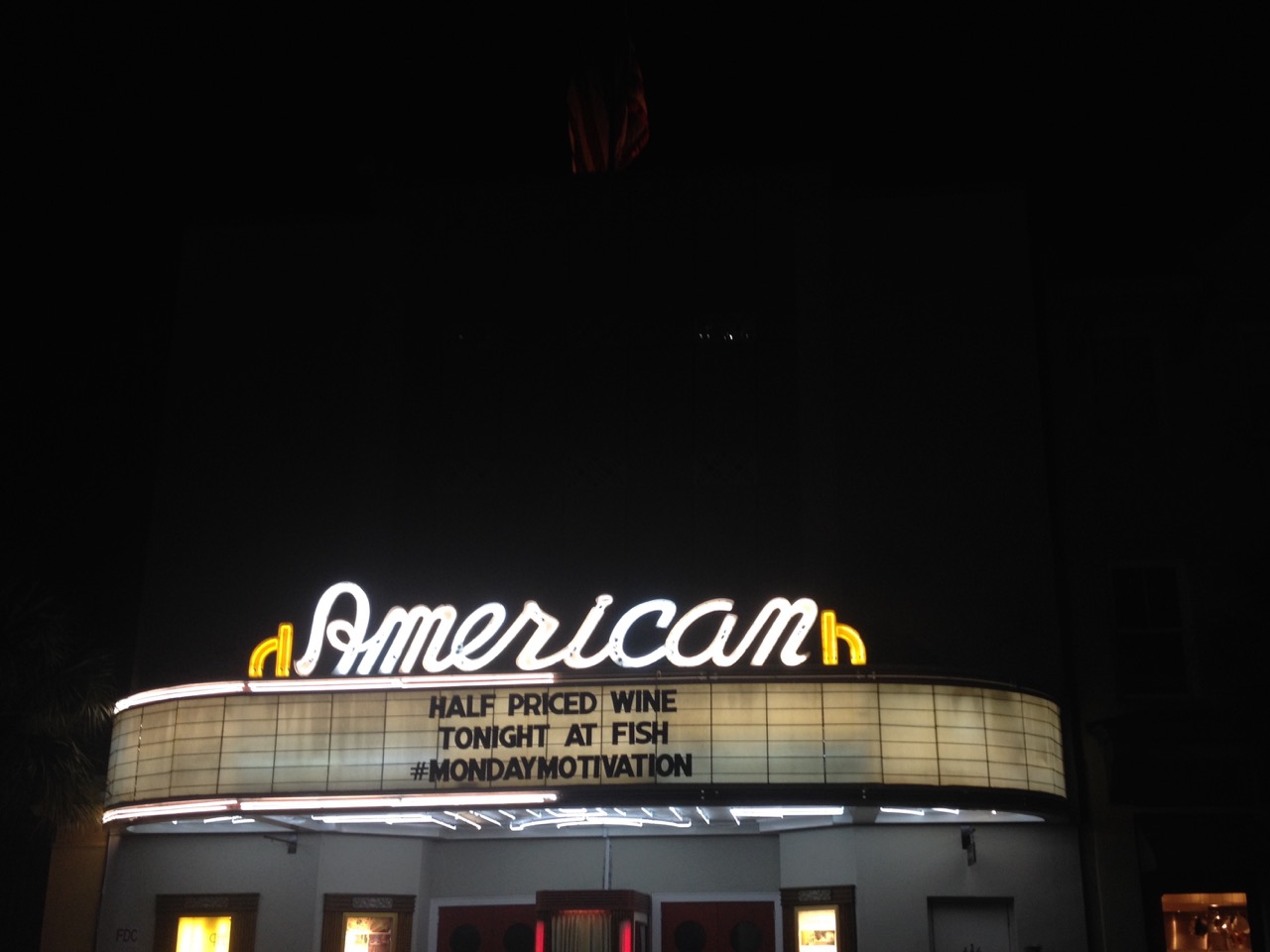 It would definitely have been nice to see this during the day but with only 24 hours in Charleston and our previous fatigue, we were pretty content with our experience.

When we were done checking out the town, we walked back to the hostel to rest before going on the road again the next day.