15 Things to Do in Rome for the First Time

15 Rome must-do for your first visit

***This post contains affiliate links. By making a purchase using one of our links, we might get a small commission, at zero additional cost to you!***

1. Try to see as many piazzas as you can

Piazza Navona is my favorite. It contains Bernini’s Fountain of the Four rivers, which represents the four river gods, symbolizing the largest rivers of the four major continents. Starting with Piazza Navona will allow you to have a great feel of the atmosphere of Rome and enjoy the sight of gorgeous fountains. 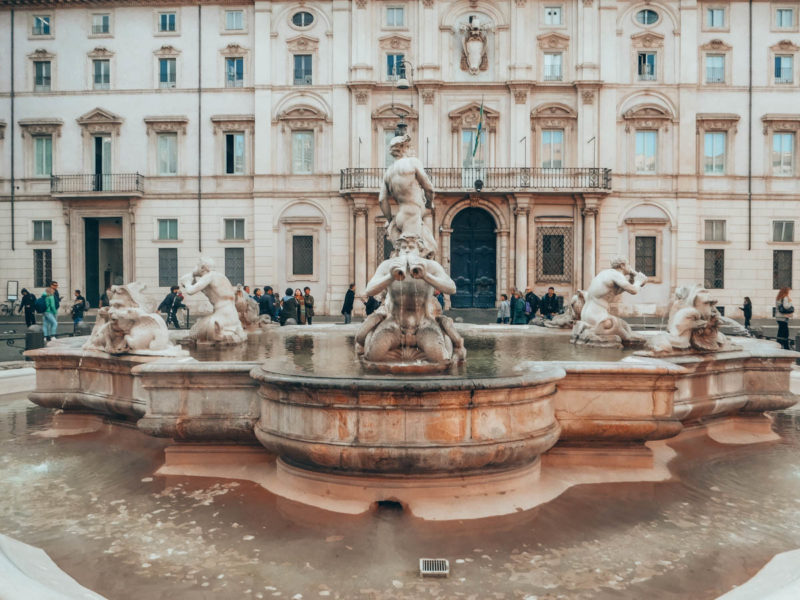 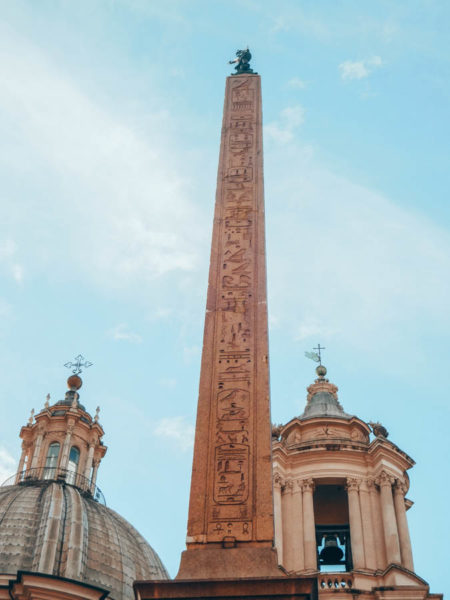 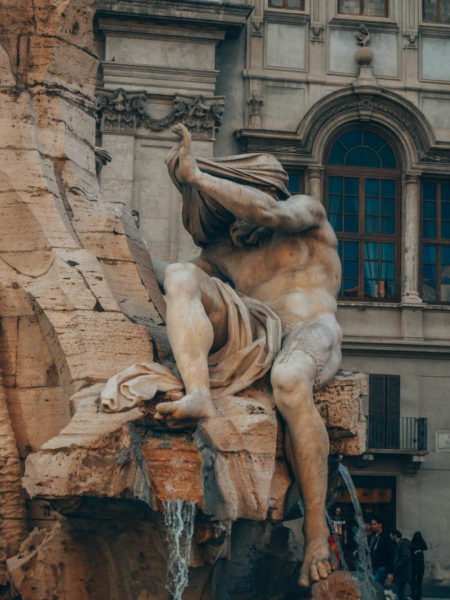 You can also stroll around Piazza del Popolo, which hosts the oldest Egyptian obelisk of Rome and is a great place to sit for a gelato and do some people watching.

The most beautiful piazzas in Rome – on top of these two are: Piazza San Petro (check out our 7.), Piazza di Spagna (see our 10.), Piazza della Rotonda (check out our 5.), Piazza of Trevi Fountain (at our 6.), Piazza Campo de’ Fiori (next one!), Piazza Venezia (our 9.) and Piazza Santa Maria in Trastevere (report to our 11.).

2. Check out the market at Campo de’ Fiori

Another way to get an authentic feel of Rome is to go to the Campo de’ Fiori to check out the food market (not running on Sundays!) and grab a cup of coffee amongst locals and tourists.

If you have the time, participating in a small-group tour like this one is a great way to learn more about historical food markets in Rome. 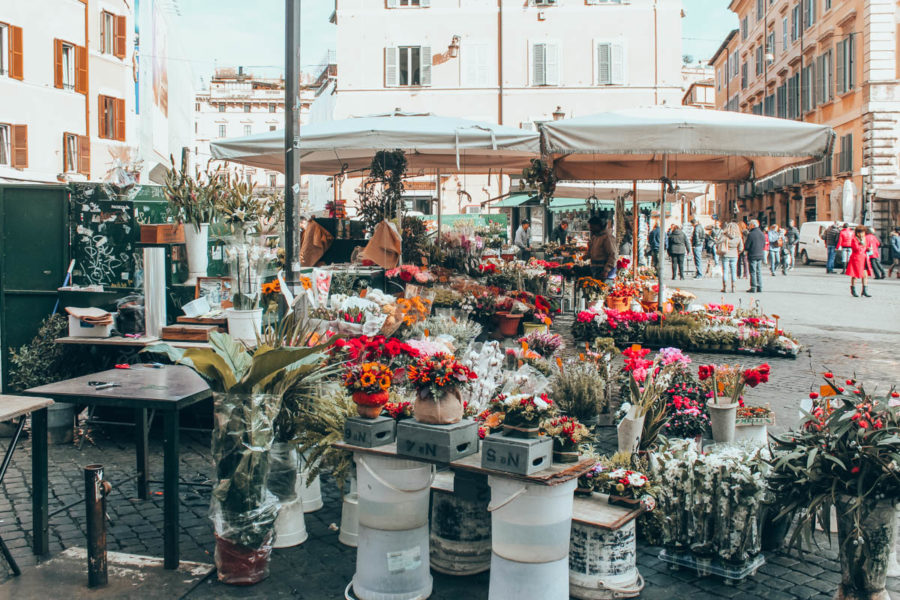 Who has never heard of Rome’s iconic Colosseum? Probably no one, and I can guarantee you you’ll be amazed by this masterpiece of imperial Rome architecture. It is actually the largest amphitheatre ever built and it could hold between 50 000 and 80 000 spectators for gladiatorial contests, animal shows, large re-enactments and dramas, and also executions from the 1 century AD to the early medieval era. 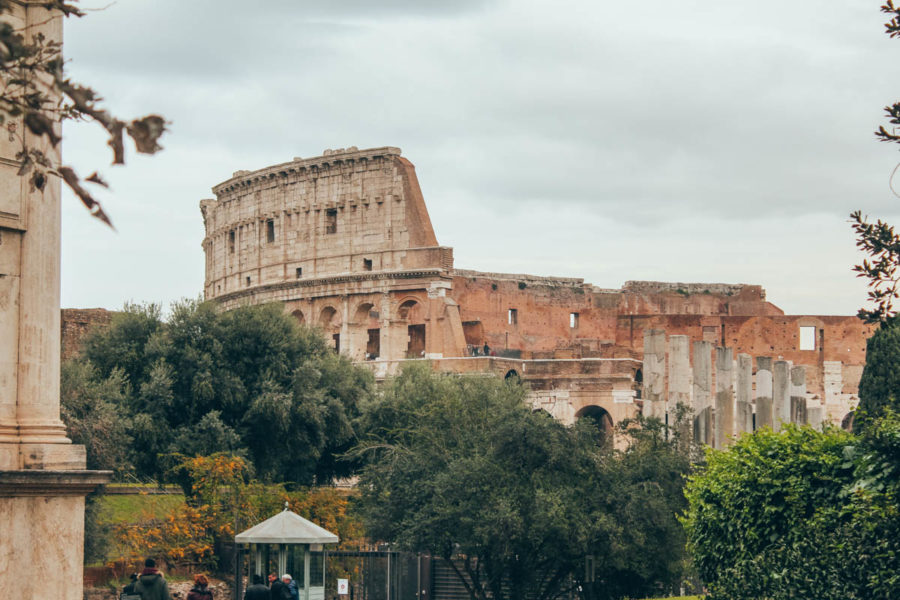 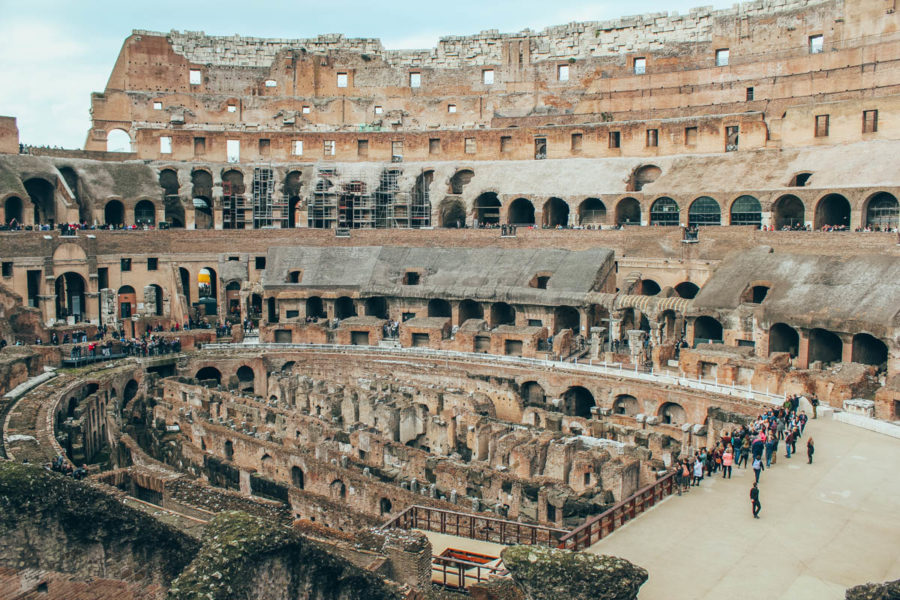 Practical tips to visit the Colosseum:
• Metro stop: Colosseo (line B)
• Get your tickets online, book a guided tour which will allow you a faster way to get inside, or be ready to queue for 1 or 2 hours.

4. Explore the Roman Forum and the Palatine Hill

To continue your fall back in time to the imperial Rome, stay in the neighborhood and explore the Roman Forum and the Palatine Hill. During the Roman Empire, the Forum was market place and the center of all public life. While you stand among the  impressive remains, try to imagine life at this time going on all around you: triumphal processions, elections, public speeches, trials, economical business…

And then head to the Palatine Hill, the place where the emperors built their palaces from the time of Augustus, as according to Roman mythology, it is where Romulus and Remus were found by the “Lupa” and where the first huts were built at the time of the foundation of Rome. 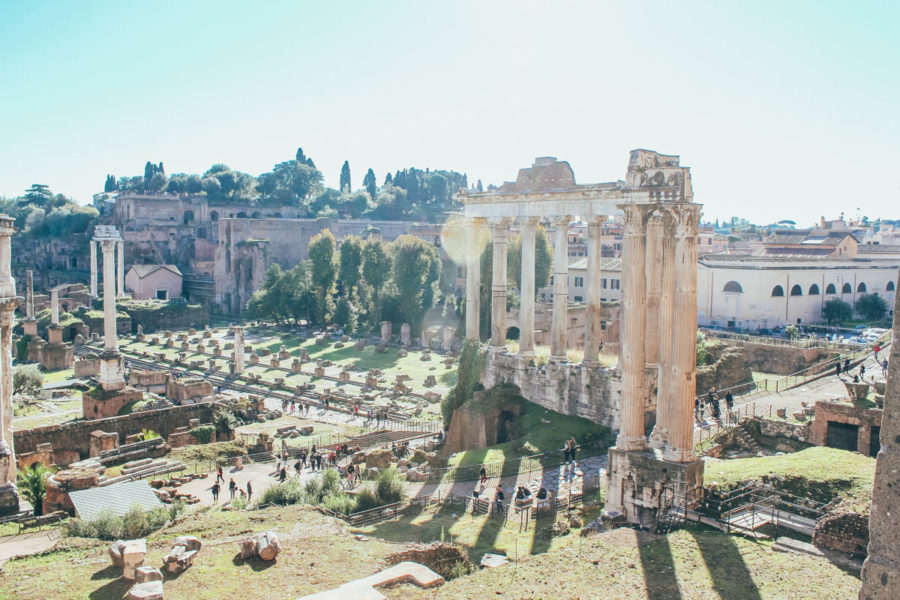 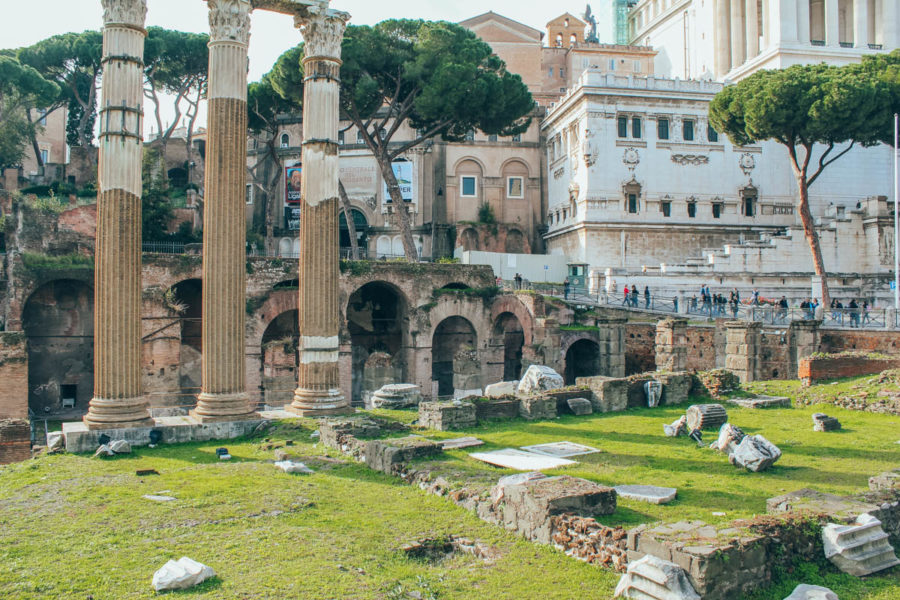 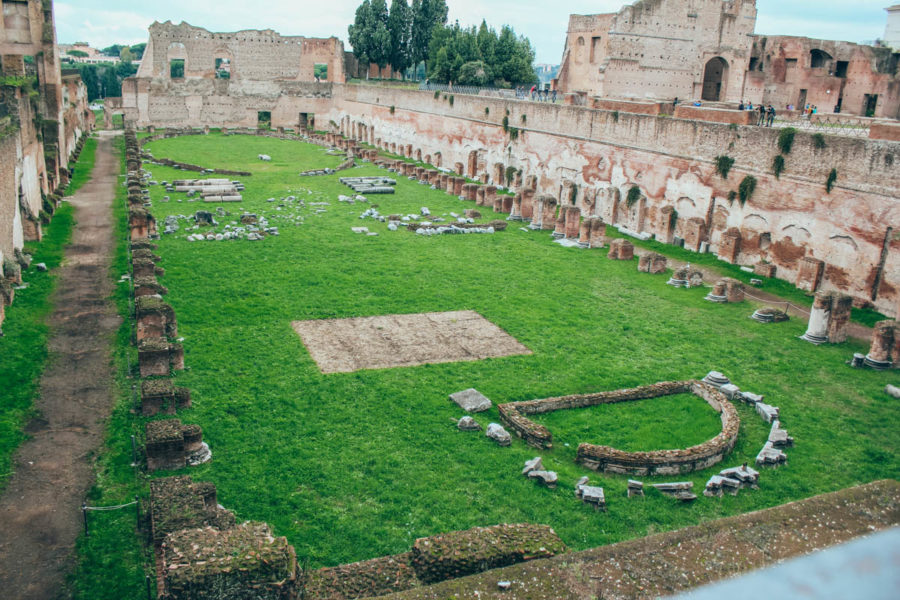 The Pantheon is a 2000 years old temple devoted to all the gods, turned into a church in the Middle Ages. It’s one of Rome’s best preserved monument and a testament to amazing architecture. Passing the large columns and stepping inside its giant entrance will give you a feeling of grandeur that makes visiting the Pantheon such a unique experience. Don’t miss the way in which the light enters the temple through the oculus – the opening in the center of the dome. 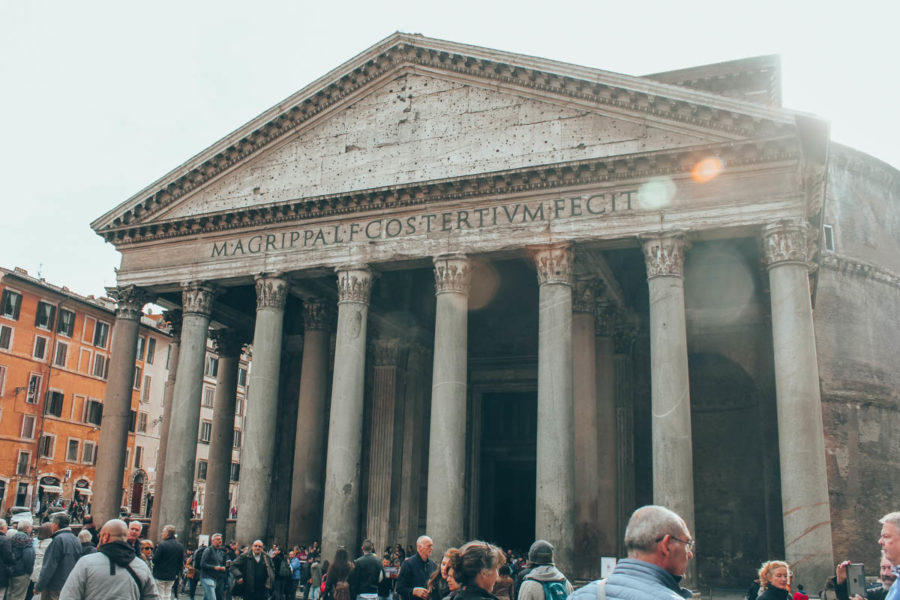 Opposite the Pantheon, in the middle of Piazza della Rotonda, you can also admire the beautiful Renaissance fountain by Giacomo della Porta, which is surmounted by the Ramses II obelisk.

It’s a popular place to sit and have something to eat or drink, amongst the noisy chaos of the place that gives it all its charm.

6. Drool over the Trevi Fountain

One of the most famous fountains in the world and one of the most touristic places in Rome, the Trevi fountain is a beautiful spot nonetheless which should not be missed. I personally enjoy it even better with a yummy gelato in hand! 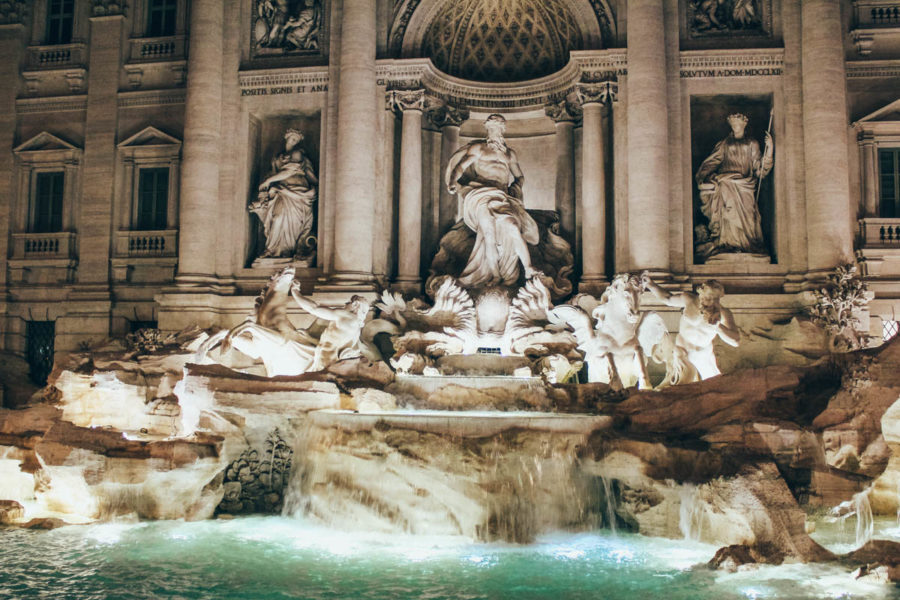 The Vatican is an independent ecclesiastical city-state within Rome, ruled by the Pope. It holds the largest church in the world: St. Peter’s Basilica, the very famous Sistine Chapel and the Vatican Museums.

St. Peter’s Basilica is the most renowned Italian Renaissance church, designed principally by D. Bramante, Michelangelo, C. Maderno and G. L. Bernini and built over an older basilica between 1506 and 1628. Once you’ve visited the church, head up to see the view from the top of St. Peter’s. 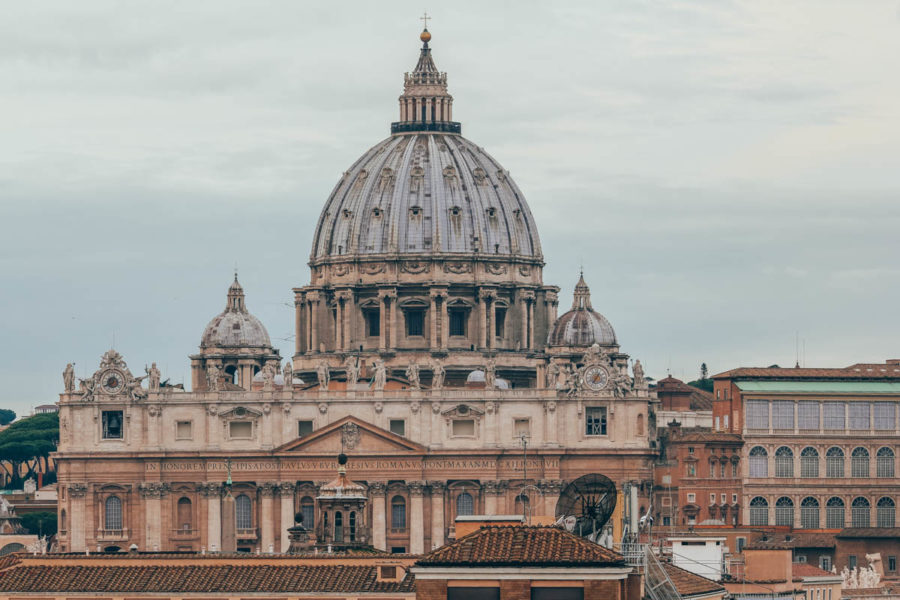 If you have any interest in culture and arts, the Vatican Museums are not to be missed. It’s huge (one of the biggest museum un the world with approximatively 20 000 works on display and more than 3 times that amount of pieces you won’t see) and usually crowded (it was the 5th most visited art museum in the world in 2017), but definitely beautiful. You’ll be able to stare at a huge collection of the most renowned works in the world like Roman sculptures and masterpieces of Renaissance art. Also don’t miss the Bramante Staircase – a double spiral staircase made as a stepped ramp – and of course, the Sistine Chapel in the very last room with its frescos and more particularly its ceiling painted by Michelangelo.

First a mausoleum for Emperor Hadrian and his family, then a fortress and castle used by the popes, a prison, and now a museum, the Castel Sant’Angelo is not to be missed on your visit of Rome. It’s Pope Nicholas III who commissioned the covered fortified corridor (the Passetto di Borgo) connecting the castle to St. Peter’s Basilica, an impressive sight from the top of the building. The castle is named after the statues of angels on the roof and is absolutely worth it at least for the astonishing views of Rome and the Vatican it provides. 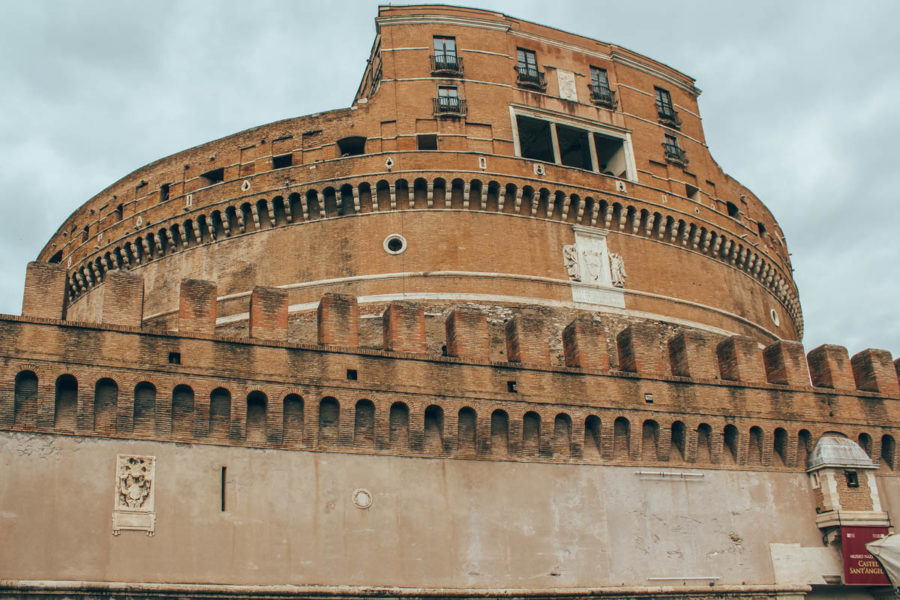 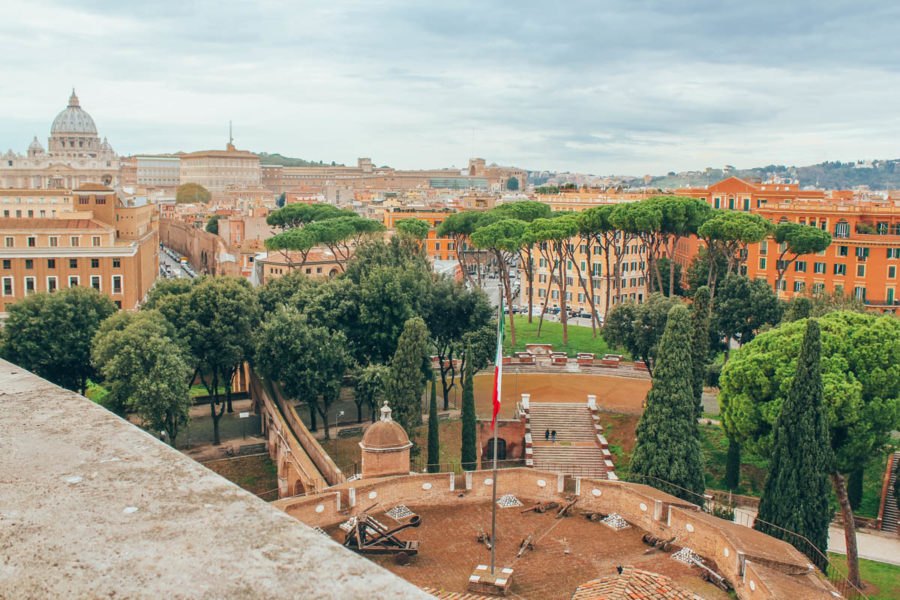 9. Pass by Monumento Nazionale a Vittorio Emanuele II – the typewriter

The gigantic Vittorio Emanuele II Monument or Altare della Patria (or even the Typewriter) was built between 1885 and 1935 in honor of the king who unified Italy in the second half of the 19th century. It represents a neoclassical take on the Roman Forum, with stairways, fountains, Corinthian columns, two statues of the goddess Victoria and an equestrian sculpture of Vittorio Emanuele II. If it interests you, dive into the controversies surrounding the building, including the destruction of a large area of the Capitoline Hill, its place during the time of Fascism in Italy, and its significance as a symbol of national identity. 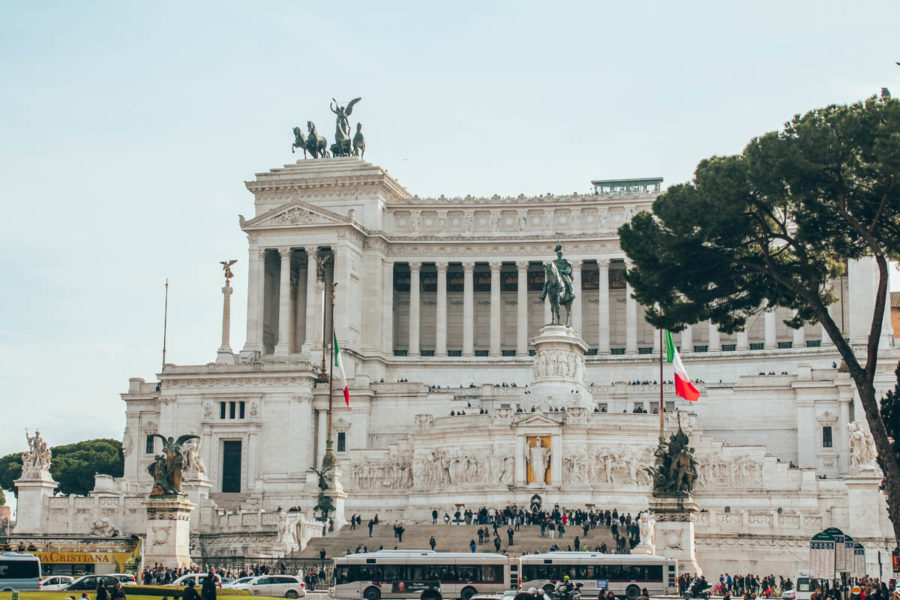 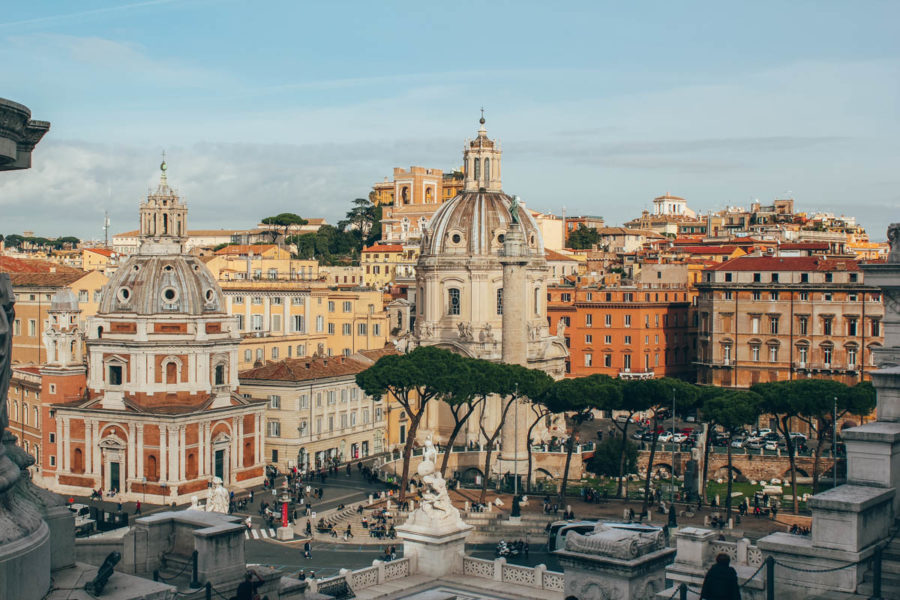 10. Sit on the Spanish Steps

The famous Spanish Steps can be found at Piazza di Spagna, going up to the Piazza Trinità dei Monti where the Trinità dei Monti church can be found. This beautiful stairway of 174 steps was first built between 1723 and 1725 by a French diplomat in order to link the Bourbon Spanish Embassy to the church.

At the bottom of the stairs, on the Piazza di Spagna, stands the Fontana della Barcaccia, an early baroque fountain built between 1627 and 1629 where you’ll be happy to sit after climbing the stairs up and down in the middle of the crowd of tourists! 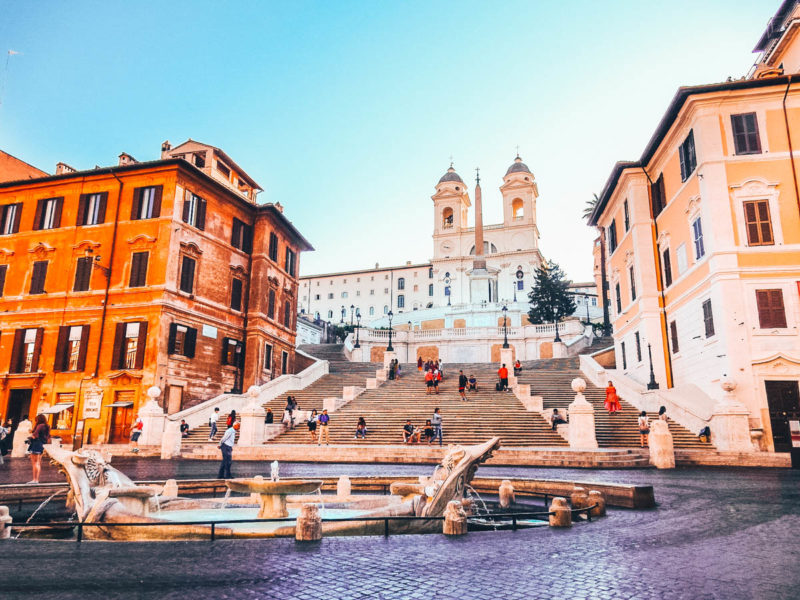 11. Wander the narrow streets of Trastevere

Once you’re done with all the monuments, it’s time to stroll around the narrow cobbled streets of the beautiful and typical neighborhood of Trastevere, on the west bank of the Tiber river. It’s a charming – if touristy – place where you’ll mostly find restaurants, pubs, artsy shops and ancient houses. It’s usually a bit quieter than the previous spots, and perfect to relax on the evening. 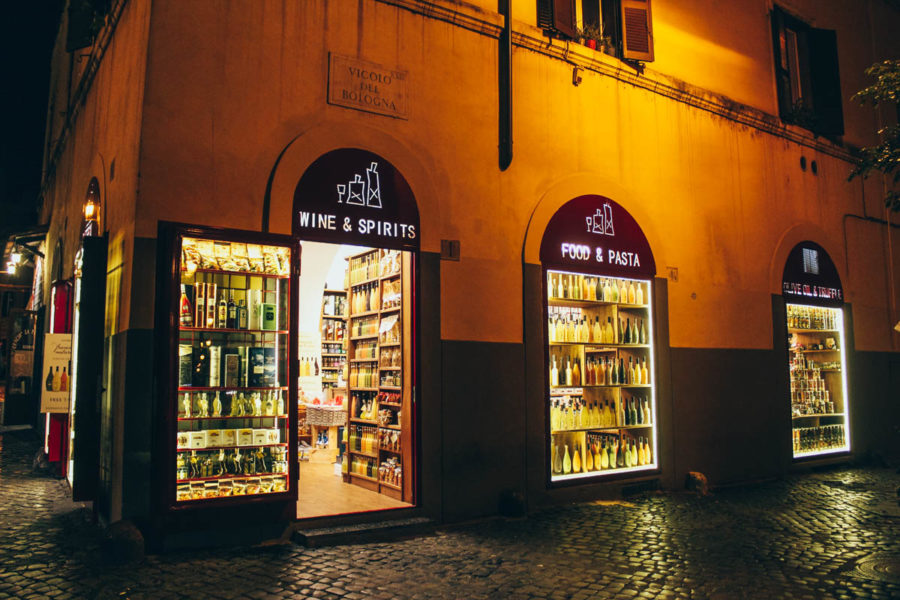 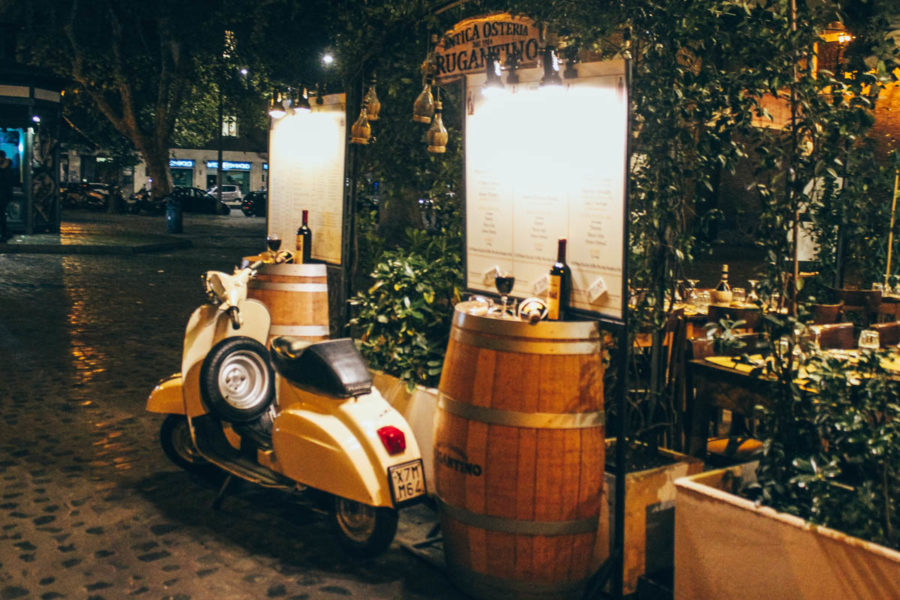 The Galleria Borghese is an art gallery hosting a huge part of the Borghese collection of sculptures, paintings and antiques, including works by Caravaggio, Bernini, Titian, Raphael and Rubens.

Do not miss the opportunity to go around the Villa Borghese gardens, the third largest public park in Rome. Close to the Galleria, and in the beautiful naturalistic English gardens, you can find the the Etruscan Museum inside the Villa Giulia, the French Academy in Rome in the Villa Medici alongside Gothic garden of the Fortezzuola, as well as the Galleria Nazionale d’Arte Moderna and the English pavilion (housing the British School at Rome). 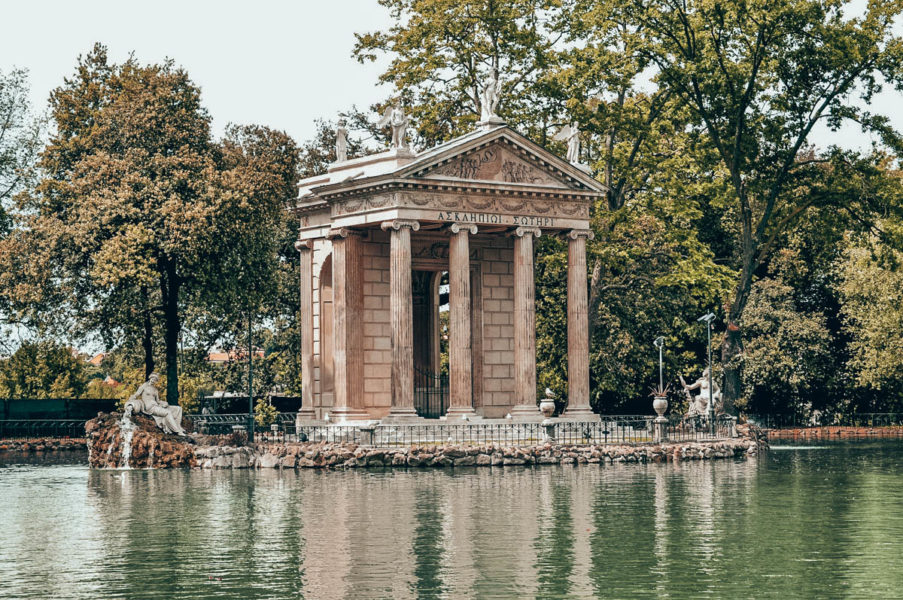 Practical tips to visit the Galleria Borghese:
• Book your ticket online to access gallery and explore its collection at your leisure

13. Enjoy the view from the Garden of the Oranges

After a long day of walking around and visiting all the amazing sights that Rome offers a first-time visitor, you deserve to relax with a breathtaking view. You will have to climb a bit to reach this garden located on the Aventine Hill, but I promise: it’s worth it. Access the Garden of the Oranges from the Circo Massimo, Testaccio, or from Lungotevere Aventino. 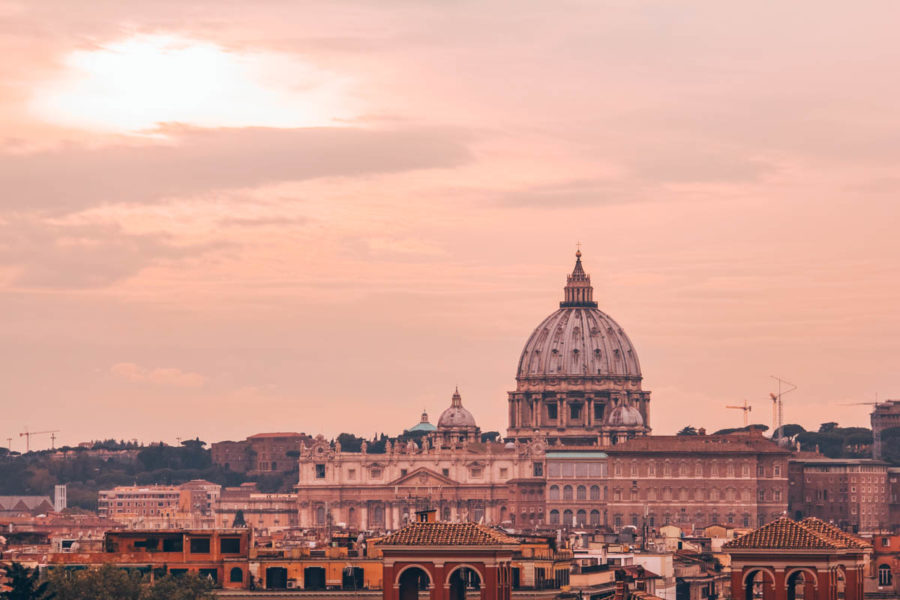 14. Have a walk along the Tiber

The Tiber is the river flowing through Rome. Actually, Rome was founded on the banks of the Tiber, a strategical place in terms of trade and commerce. Nowadays, strolling along the calm banks of the Tiber makes for a nice walk and lets you have a look at the numerous bridges going over the river. 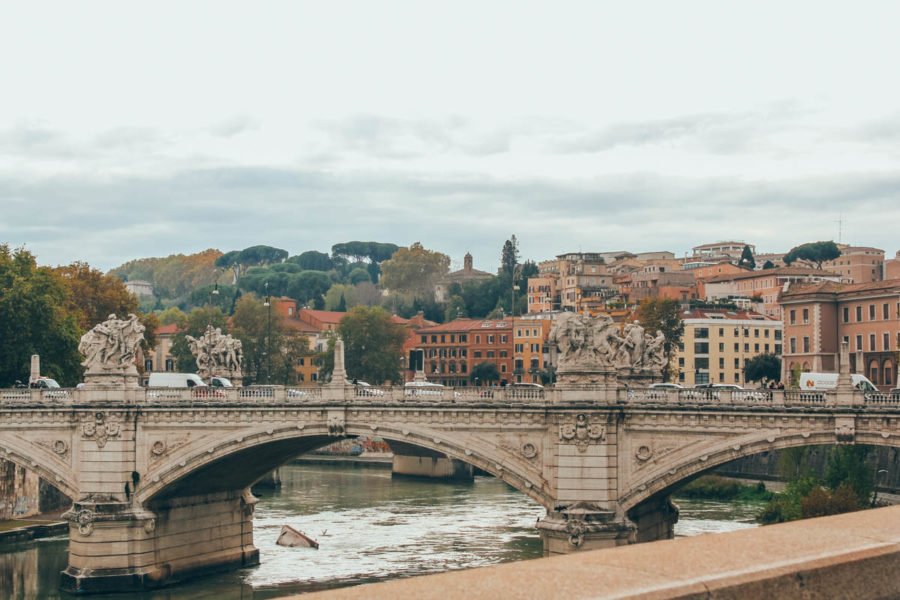 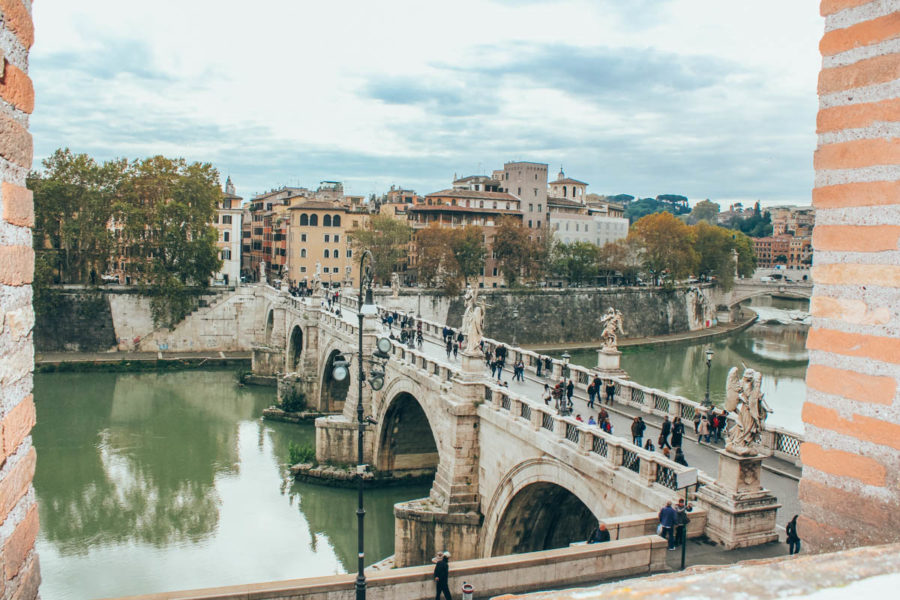 If you have the time, don’t miss the Tiber Island, located in the southern bend of the Tiber in Rome. The small island is connected to the rest of the city with bridges on both sides. 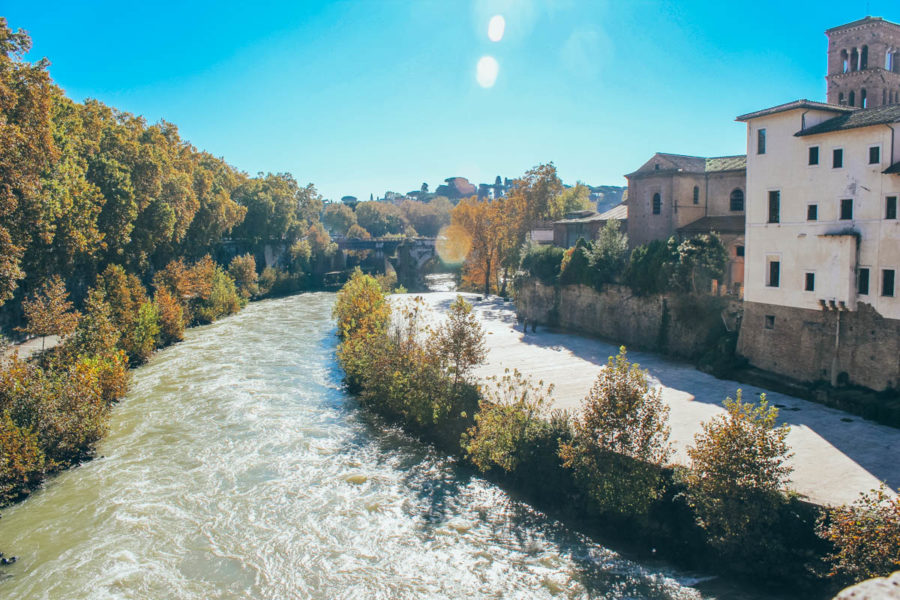 15. Stuff your face with as much pizza a taglio as possible

Last but not least, what would be a trip to Rome without stuffing your face with pizza? Since the Italians are great at accommodating everyone and you will find everywhere vegan pizza and gluten free pizza, so there’s really absolutely no excuse not to indulge!! Just stop at any pizza a taglio stall you encounter as soon as you feel the hunger creep in and test a different one every time! 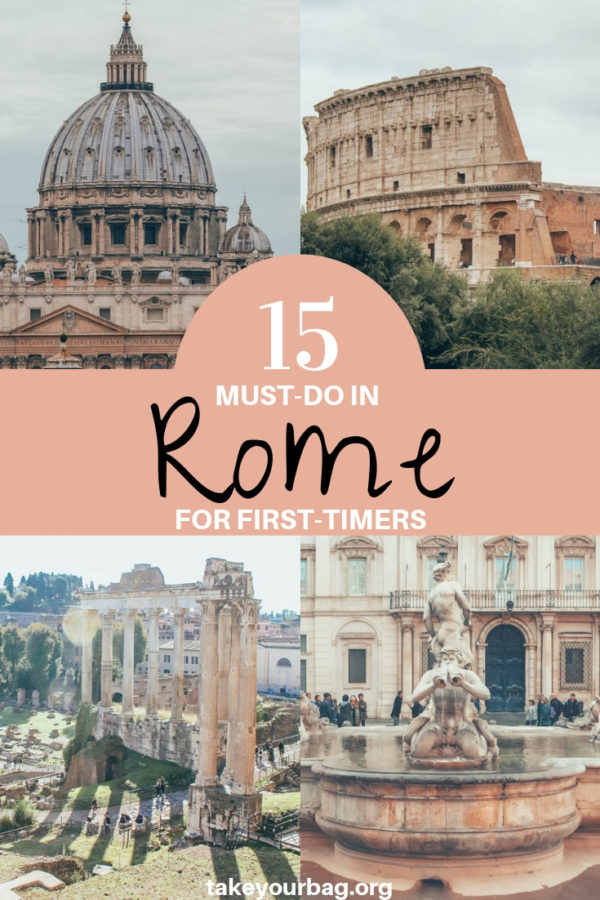 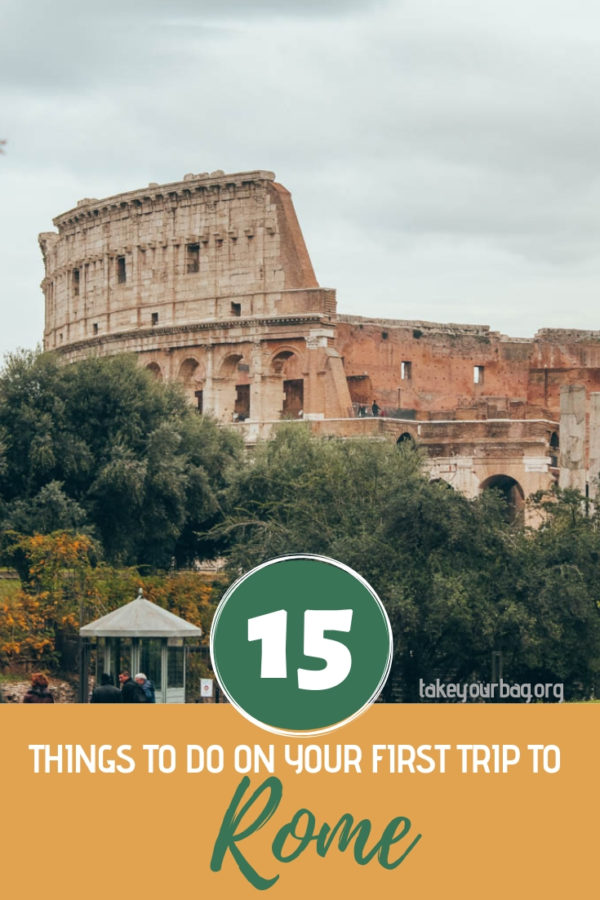