10 things to do in Vilnius 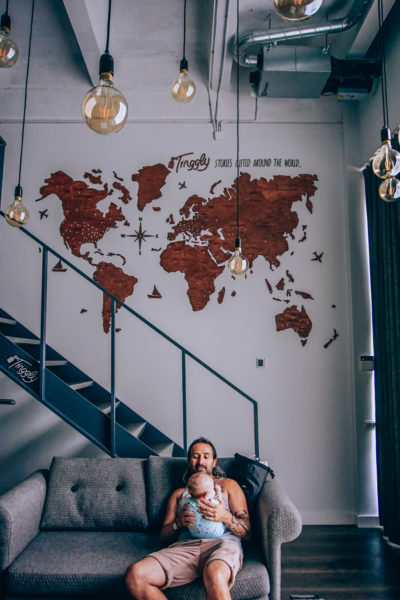 Welcome to Lithuania, and we need to thank Tinggly and their Blogger House for this amazing opportunity to discover this economically rising Baltic country. And let me tell you, our stay in Vilnius couldn’t have started in a better way. The Tinggly’s Blogger House is a beautiful loft built on what was once part of a secret Russian nuclear weapon factory!

But it’s time to take you on a tour and tell you what we think are our favorite 10 things to do in Vilnius!

This article might contain affiliate links. If you make a purchase or a reservation using one of these links, we might earn a small commission, at zero additional cost to you!

1. First thing to do in Vilnius: Take a Walking tour 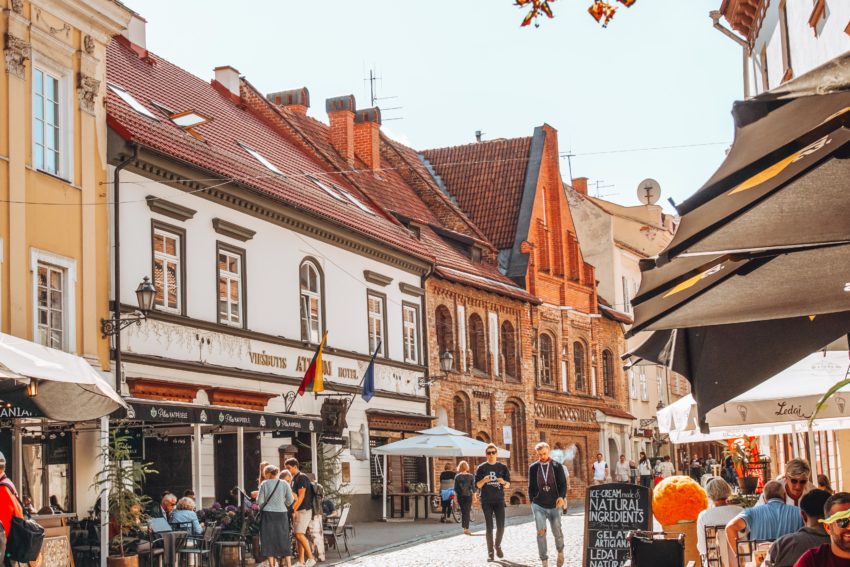 It’s the perfect beginning to your journey. Discovering Vilnius with a guided walking tour by a local is the best choice to stroll around town (which isn’t huge so don’t worry) and see the best spots. From the presidential palace to the Jewish quarter, from the free state of Užupis to the center of the night life, you will have all the perfect insider tips and info that you need!
And if you love history, it’s even better! There is a lot to learn about the nation that was the first Baltic state to declare itself independent after the dissolution of the Soviet Union.
So make sure to book a tour with them or book this private tour with a local. 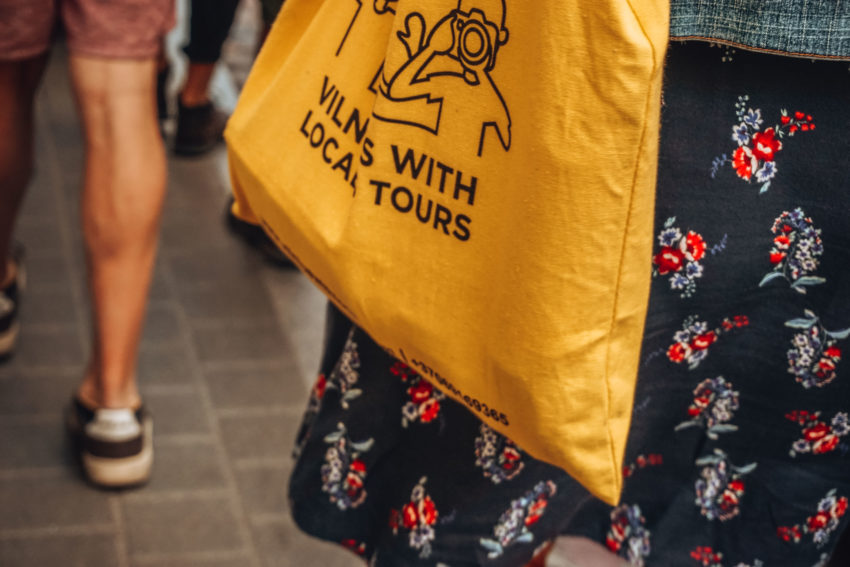 2. The Presidential Palace and the Centre for Civil Education 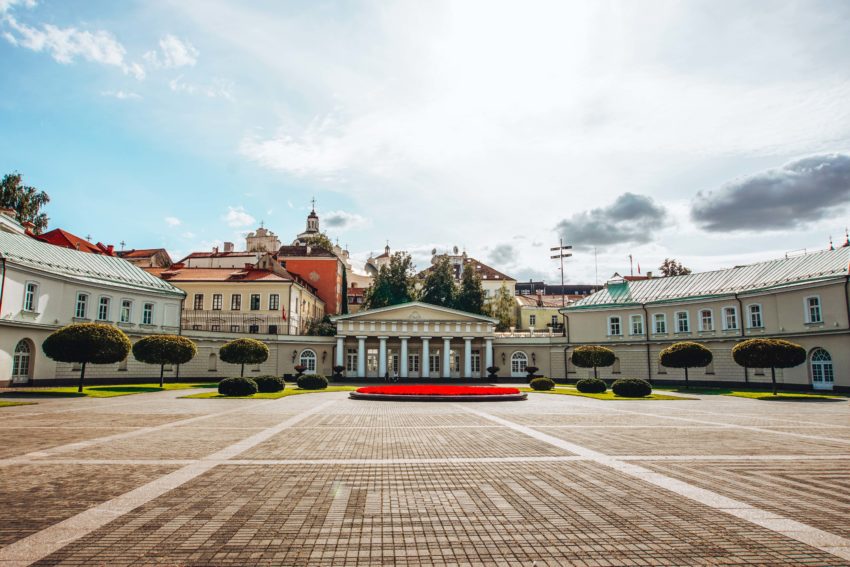 Way better than the White House (yes, we were kind of disappointed on this one).
Don’t be shy, go to the entrance, the guards with metal detector won’t bite you! Many people look trough the fences thinking that it’s an impenetrable fort. Wrong! Do not miss the chance to see it from the inside, especially as it hosts the Centre for Civil Education that will tell you how Lithuania became what it is now. And believe me, it’s such an interesting history full of political independency movements and pride for its roots.
A country occupied at first by the Russian Empire, then the Soviet Union, the nazi Germany and back to the Soviet Union really has a lot to tell!
And if you are a real trip planner, you can have a guided free tour inside on Friday and Saturday by just making a reservation at least three days in advance at this email. 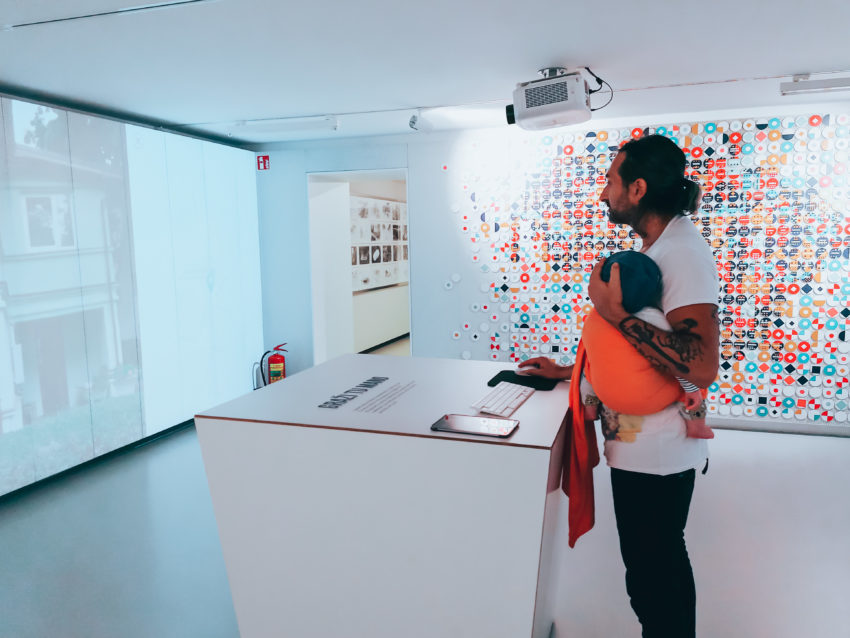 This site that costs 3€ for an adult, and 1.50€ for students, children and seniors, is a must see. Indeed, the highest building in the old town is fascinating for several reasons:
-The Foucault pendulum that demonstrates the effect of the earth rotation
-The ramp of steps that makes you climb right to the top after taking the lift… it’s a real throwback in time!
-The supreme view of Vilnius 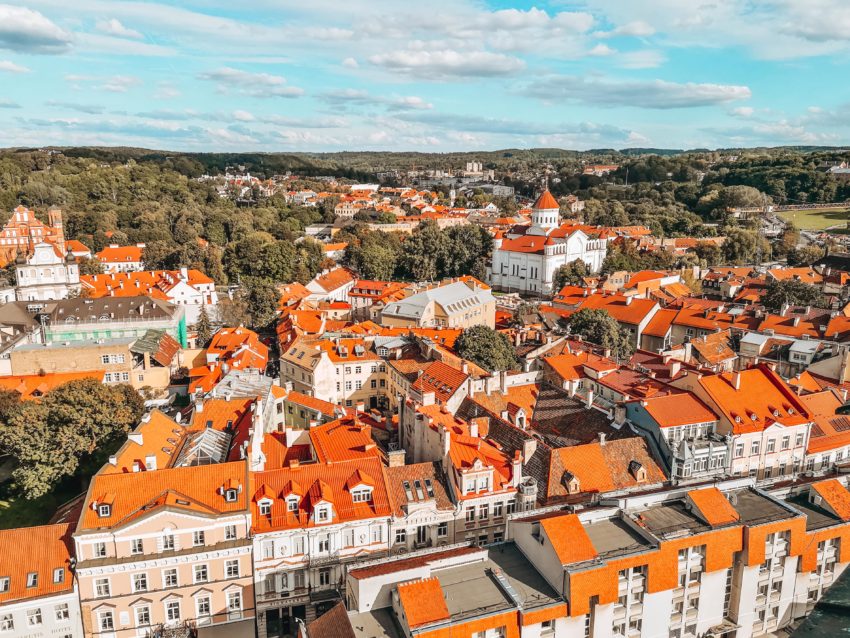 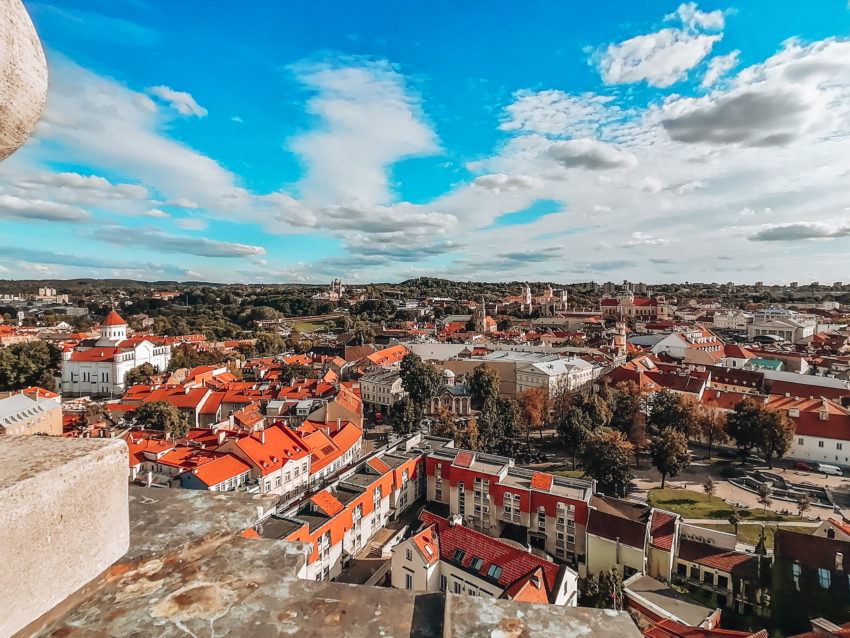 4. The Republic of Užupis 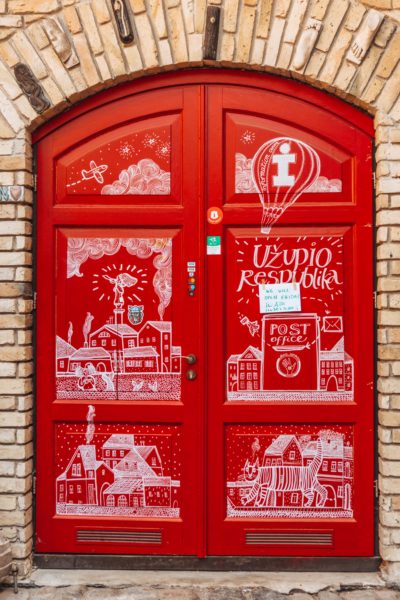 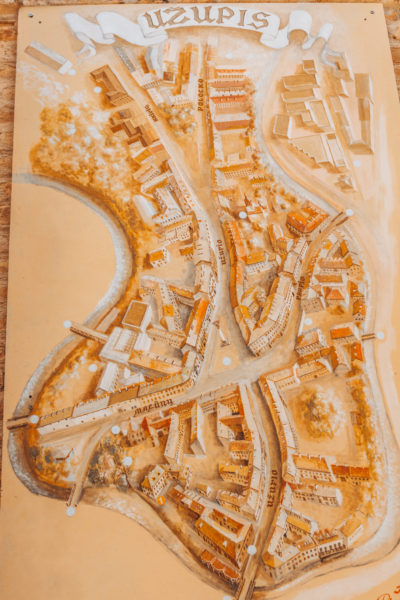 A self-proclaimed micro-nation founded in 1997 by the inhabitants of this part of the city on the « other side of the river ». Užupis is a very pittoresque and artistic vibrant hood, with its own constitution and guess what? They even had an army of eleven people at the beginning…!
Talking about the Constitution, it’s an absolute landmark, written in 34 languages, that you will find on a wall on Paupio street.
If you happen to be there on the 1st of April, you will be lucky to celebrate Užupis’ independance day drinking beer at the cost of 1€ but I won’t spoil too much because I really hope you fellow readers can visit this place very soon!
For now we say goodbye to this micro-nation with its mottos : « don’t fight » « don’t win » and « don’t surrender ». 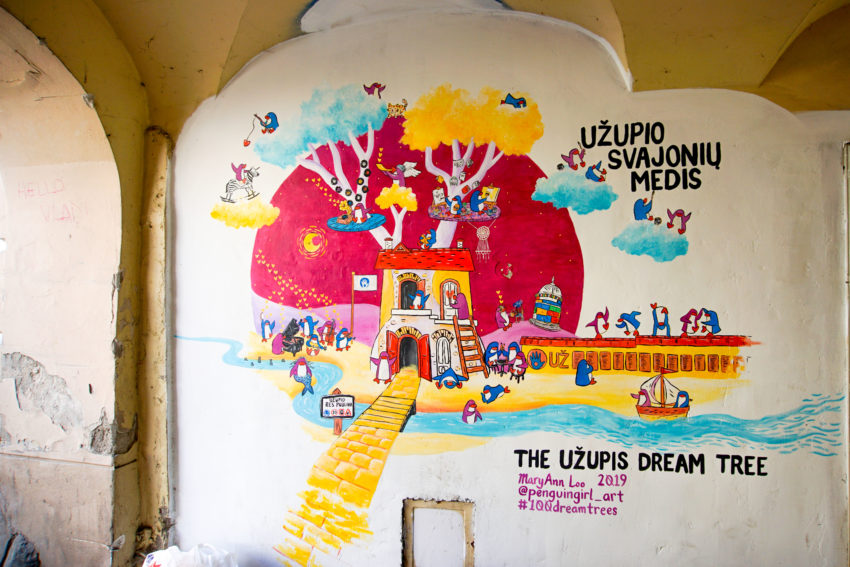 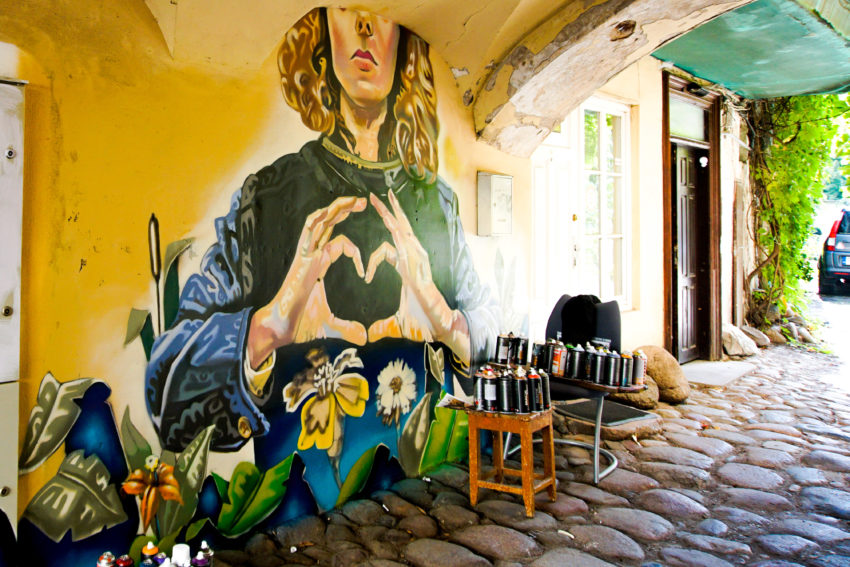 It is not just a simple tower, it’s a real symbol of Lithuania’s independency…
Most recently, it marked the beginning of the “Baltic way” where in 1989 2million people across the 3 Baltic “regions” (at that time it was still considered as the Soviet Union) joined there hands, creating a human chain to call for independency that triggered the fall of the communist regime, and on the 1st of January 1919 (after the end of World War 1) the Lithuanian tricolour flag was settled up there for the first time.

Enough of history? Well, climb up the hills and for your pleasure : another beautiful view of Vilnius awaits you. 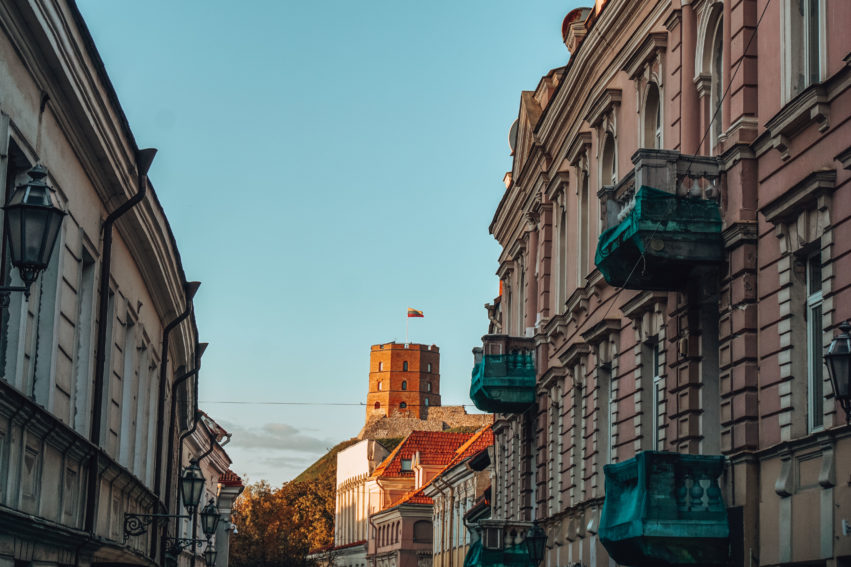 6. Check out all the graffiti

We are huge fans, or at least one of us is (me).
I wouldn’t pass on a walking tour of the best street art spots, and Vilnius happens to be a little graffiti heaven! In the old town you can stumble on one at every corner. Fact is that here, they are really meant to tell you a story.

Example: if you go in the Jewish quarter, the murals are made to remember who lived in this part of town. And if you download the app RestartReality.ee the story becomes alive! It’s almost like having a time machine…. So go around town and just let your eyes guide you to a piece of Lithuanian history. Alternatively, you could go on a guided tour of the Vilnius’ Jewish quarter. 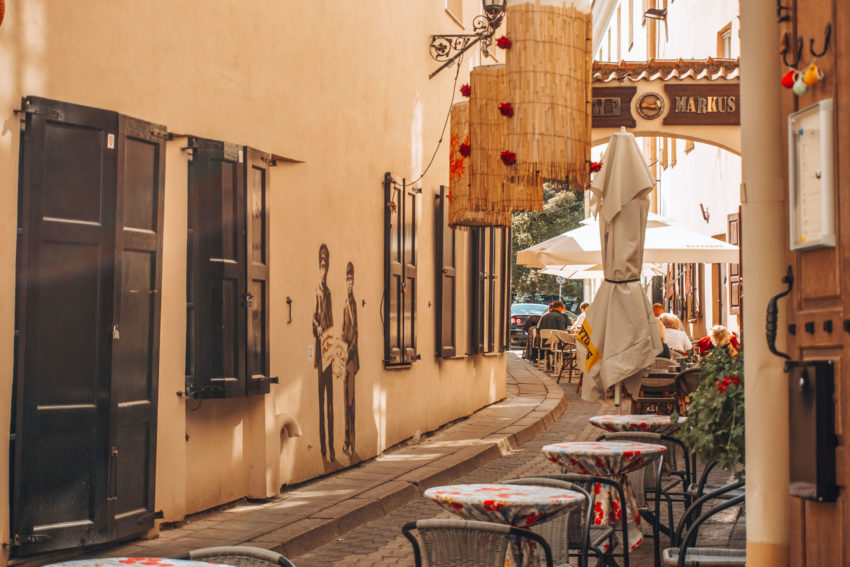 One thing that I have to admit is that I went to see a precise graffiti masterpiece…. (Putin kissing Trump), but I did not do what a good blogger should do (read updated guides on Vilnius) and… the murals was not there anymore!! It was replaced by a pretty awesome Trump giant baby doll asking for hugs, looking to make empathy great again! 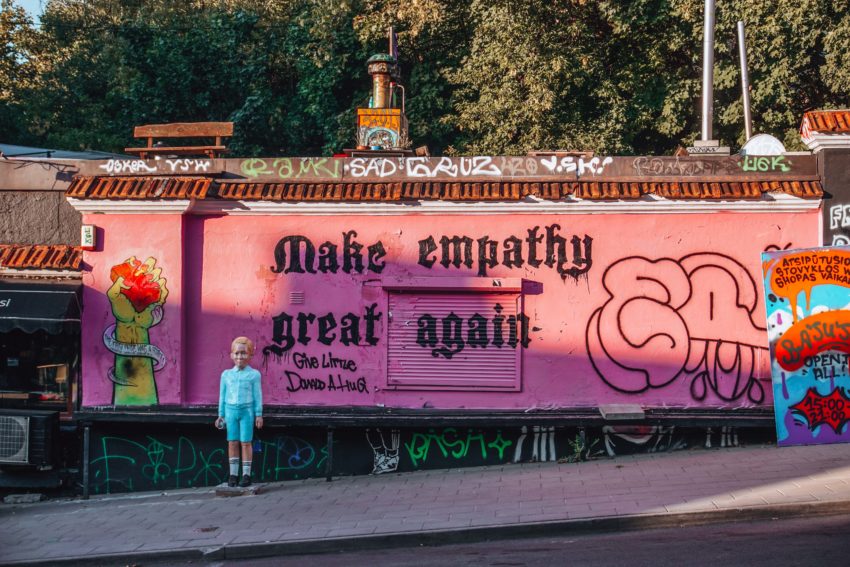 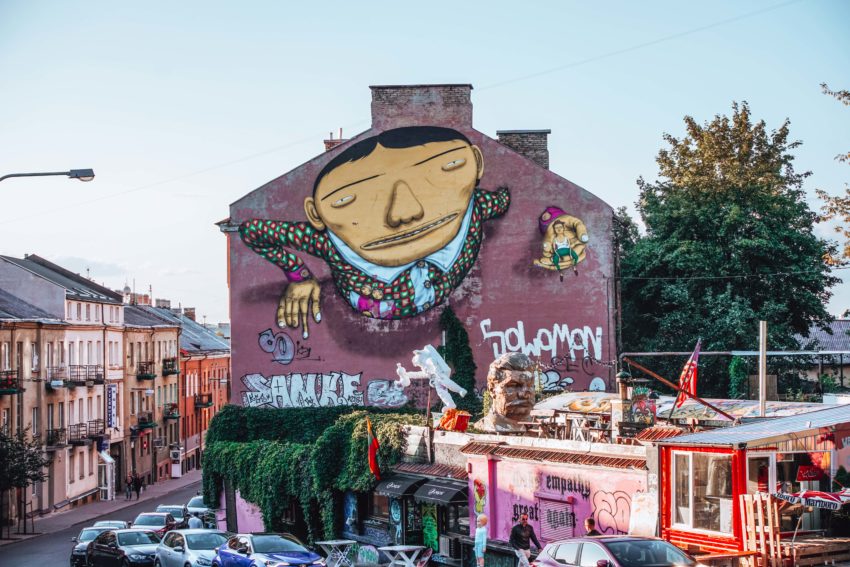 7. Eat all the Lithuanian vegan food

Even if the Lithuanian consider themselves meat lovers, the variety of restaurants that serve plant-based cuisine is impressive.

Here is the funny story: there is a famous place in the old town called « meat lovers pub », and just right next to it… Vieta « conscious vegetarian and vegan food » ! I sincerely think that behind all this was a well-studied marketing plan.
The thing is: the food was delicious, portion sizes were above average, and the Fish and chips was especially to die for!
Prices are the cherry on top, and we were so excited by the menu that we ordered 3 main courses: scrambled tofu with veggies (4.90€), tofu steak with salad (4.90€) and the king of tofu “fish & chips” (7.90€). I mean of course… we were traveling with a 5 month old baby, we needed to fill our tanks with extra energy with veggies & fruit shakes! Do yourself a treat and do not miss this place. 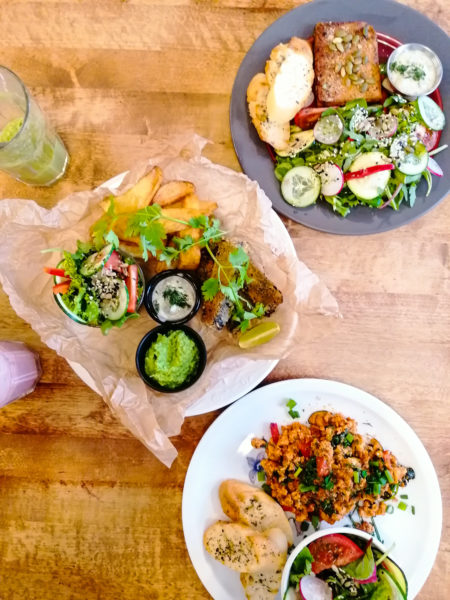 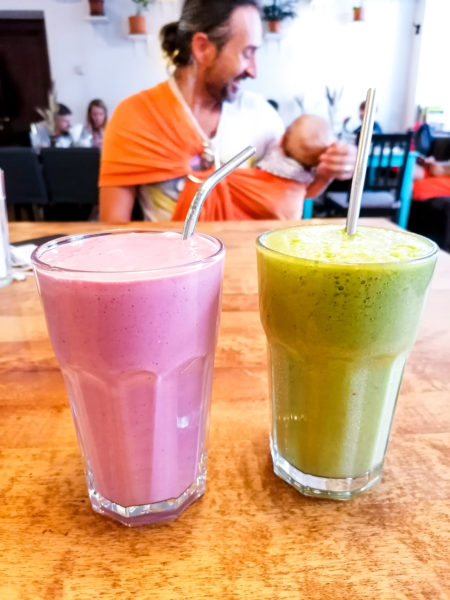 But as I said you won’t have an issue finding other good vegan restaurants. Rose Hip vegan bistrot is one of them. To be honest we were not lucky at all in going there as they have lost our order and we had to wait about an hour to get our food, but I know that this does happen sometimes and they were very kind and apologized by offering us a gigantic (vegan) ice cream! 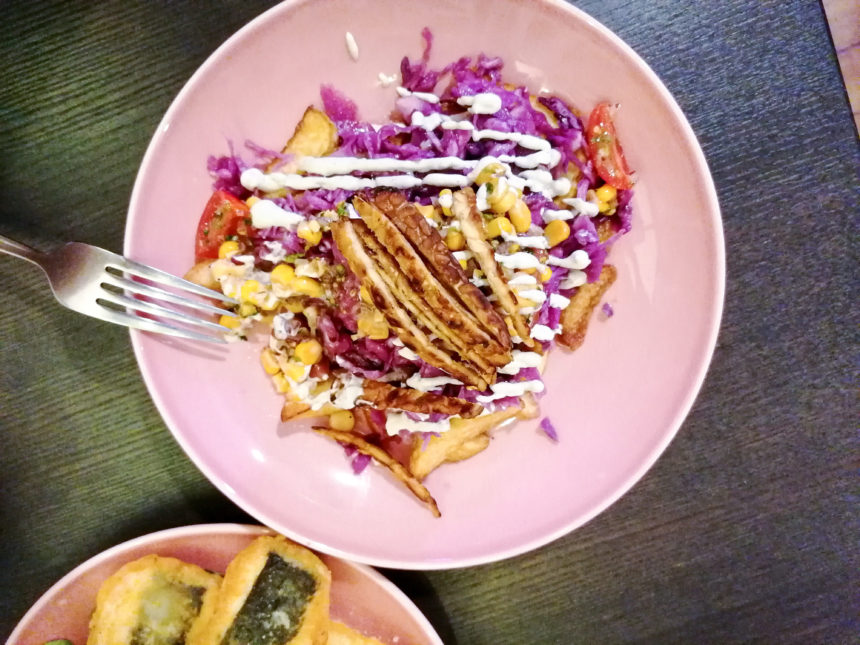 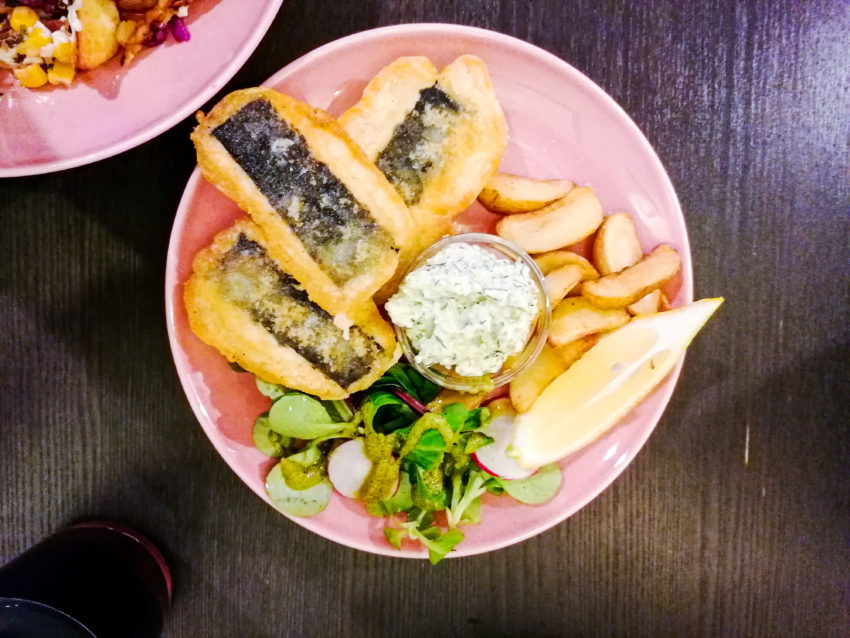 And if you feel like cooking at your place if you booked an apartment, Iki (the local supermarket) has everything you need to make the most incredible vegan gourmet menu you can imagine.

8. Check out the bars

What’s better then a good craft cocktail after a good meal?
Cocktail culture in Lithuania is becoming huge, but as it is still pretty recent, they have kept the genuine passion to make the customer service a priority… or at least that’s what happened to us at Aphoteke Tales and Cocktail bar, an absolute gem in one of the beautiful squares of the old town.
As you might know I am a professional bartender when I’m not blogging, and I sincerely appreciated the way we were treated over there, it felt like being home. 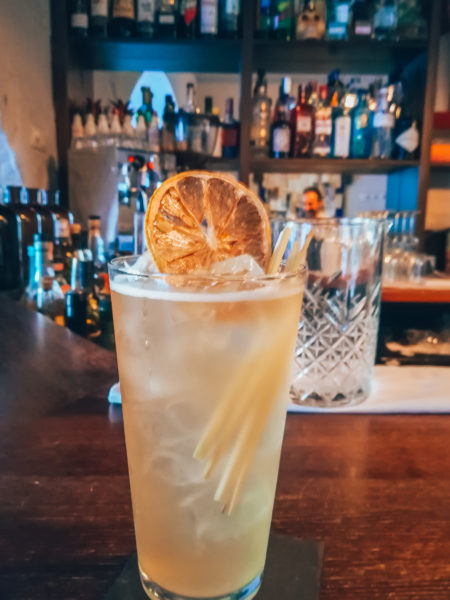 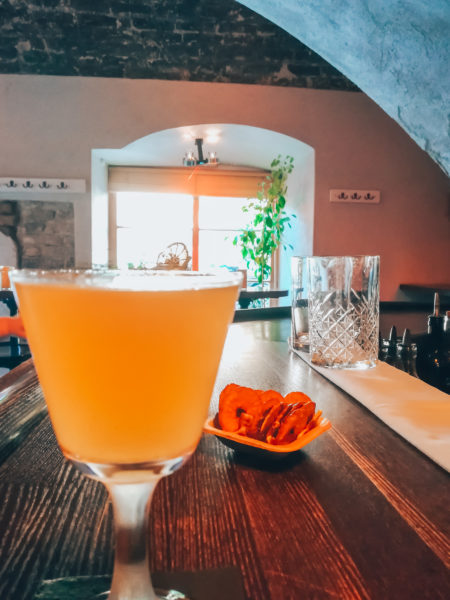 One thing that I would suggest in the warmer months is to rent a bike and cycle along the river and through the old town.
Along the way you can really spot things that you won’t read in any guides. That’s what I did in the morning while the baby was asleep so Alice could restore her energy from both of the guys. 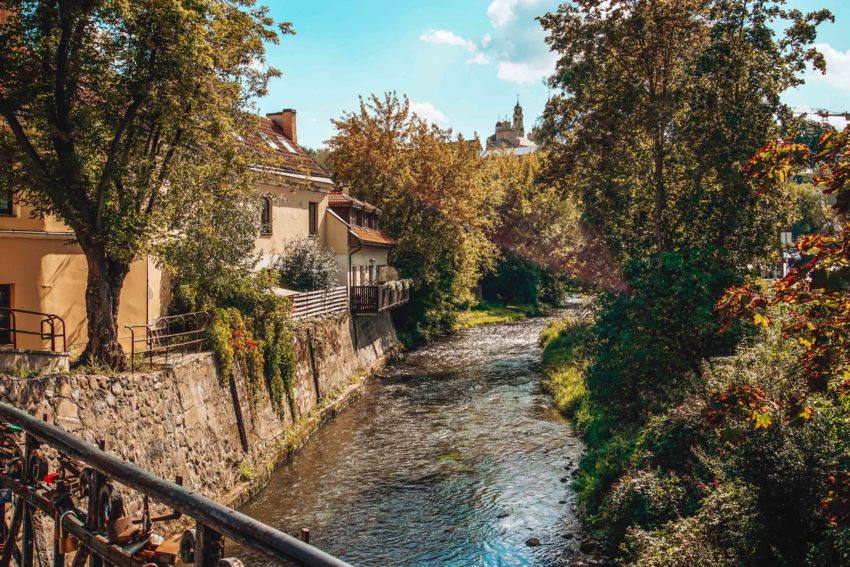 Beer is their thing, basketball their religion and if like us you are a fan of great TV shows, you should know that Chernobyl (Netflix) was filmed there. So if you are into filming locations, this place is definitely for you!

If you’re a fan, this Chernobyl Special Tour is for you! It takes you from Kiev to Vilnius, on a 5 days Chernobyl series themed tour.

Vilnius we really liked you. I wish that next time we’ll stay longer, to play basketball with my son on a court and drink at one of the many beautiful places we’ve seen while talking about how recent history was made here!

Extra things to do in Vilnius

Like a good record we give you some extra bonus ideas:

– Holy donut: its name says it all, if you love donuts this is a donut heaven for vegans and non-vegans alike
-Observe that “life happens in courtyards”: cool restaurants, bars, venues, sculptures, you can find anything you want in the courtyards, be curious and you won’t be disappointed.
-Go listen to the National Orchestra in the street Stiklių gatvė while they practice, you ears will be thankful
–Kayaking on the river from April
–Go sightseeing in Trakai 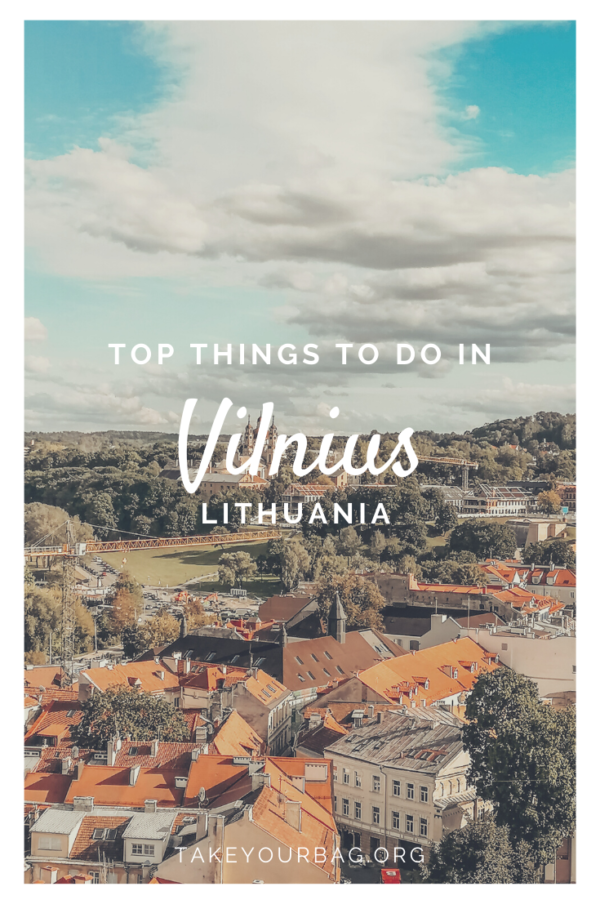 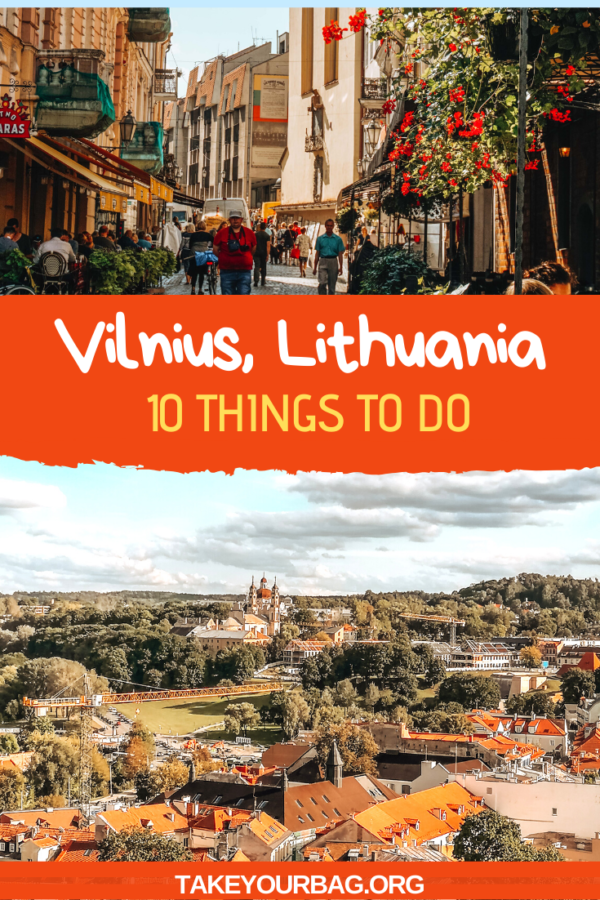